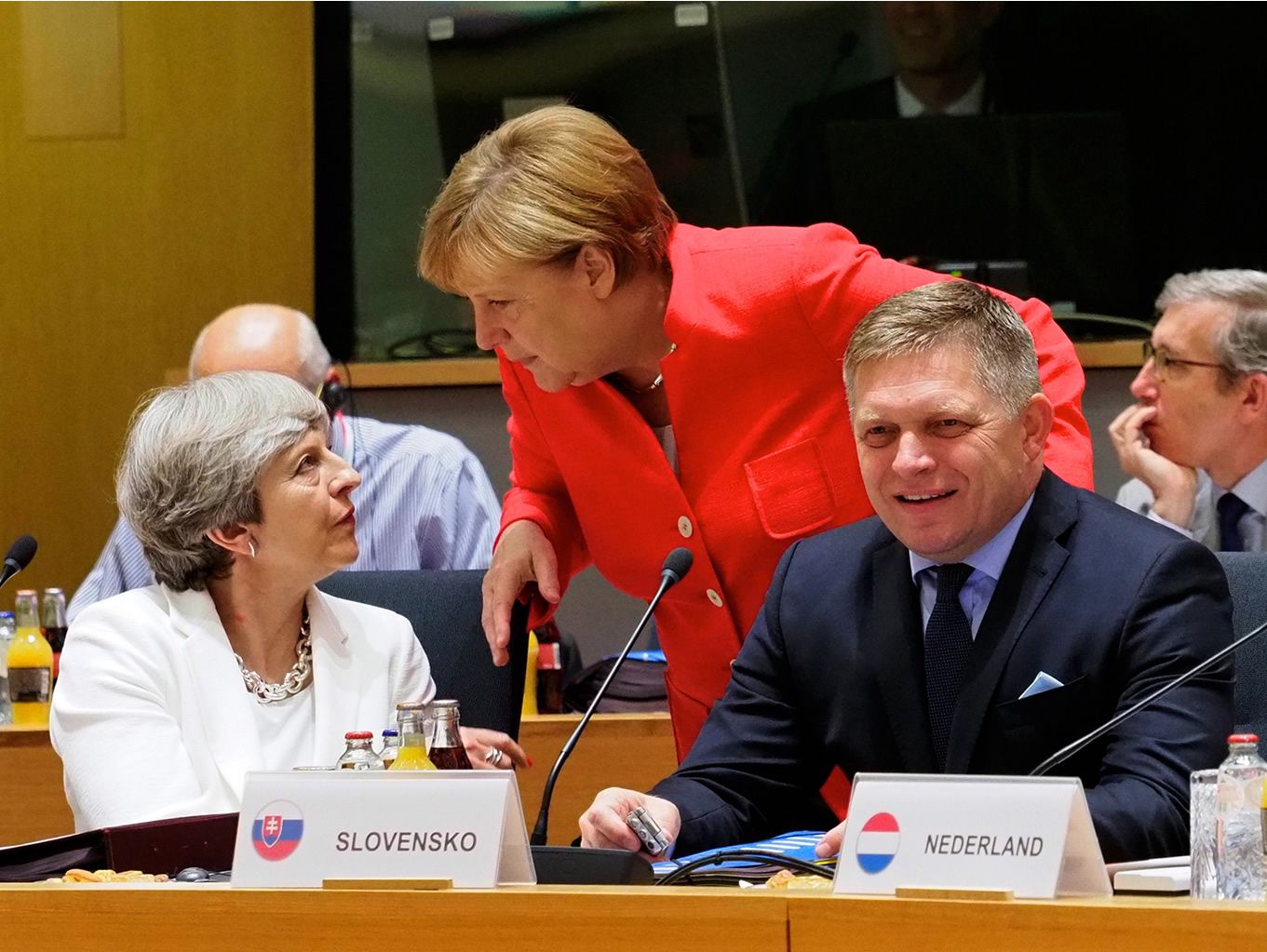 "Sufficient Progress" has been declared but the rub for Sterling is that Brussels has thrown down another gauntlet for PM May with its Phase 2 guidelines.

The Pound fell steeply against the Euro and Dollar Friday, despite “sufficient progress” being declared by the European Council, after Brussels published guidelines for Phase 2 of negotiations that may now have opened a fresh can of worms for the British currency.

EU leaders agree to move on to the second phase of #Brexit talks. Congratulations PM @theresa_may

“The Council’s decision to not discuss a future trading relationship until March will have come as a disappointment to some. This may explain why the pound fell by around 0.8% against the euro and the dollar over the course of Friday,” says Andrew Wishart, an economist at Capital Economics.

A formal acknowledgement that trade talks are unlikely to begin until March may have helped spook the currency, given the tight time schedule negotiators will be working under, although markets were well briefed to expect this so it is unlikely to explain all of the move in Sterling on Friday.

Instead of trade, early talks will instead focus on striking a transitional agreement to take effect after the UK’s March 2019 exit date, which would enable details of the future relationship to be finalised.

Another possible driver behind the sell off could be the stipulations contained in the Phase 2 negotiation guidelines set out by the European Council.

“Negotiations in the second phase can only progress as long as all commitments undertaken during the first phase are respected in full and translated faithfully into legal terms as quickly as possible.”

“While an agreement on a future relationship can only be finalised and concluded once the United Kingdom has become a third country, the Union will be ready to engage in preliminary and preparatory discussions with the aim of identifying an overall understanding of the framework for the future relationship, once additional guidelines have been adopted to this effect.”

British and European negotiators have said repeatedly that “nothing is agreed until everything is agreed”, referring to the agreements struck over the “financial settlement”, the Northern Irish border and citizens rights.

Prime Minister Theresa May has also said that there will only be a transition period, and a financial settlement for the EU, if it is clear in March 2019 what future relationship the UK will be transitioning to.

“The Withdrawal Agreement is likely to include the broad outlines of the future UK-EU relationship, under EU law a trade deal cannot be formalised until the UK becomes a third country in March 2019,” adds Wishart.

However, the European Council’s guidelines make clear that some amount of trade discussions will have to be left until after the UK’s scheduled departure date on March 29.

This may create scope for the European Union to extract the bulk of a “divorce bill” and legally binding pledges on citizens rights and the Irish border without having to offer anything in return.

In theory it may be possible for the EU to draw negotiations out over the “clearly defined and precisely limited in time” transition period, during which British money will fill the budgetary hole created by the UK’s departure, only to leave Theresa May alone at the altar at the end of that period.

At the very least, the guidelines and ongoing instability in the British parliament may have laid the foundations for another bout of tension and “deadlock” to play out before further progress can be made.

For all of the concern over a possible delay of trade talks, and Friday’s sell-off for the Pound, the majority of strategists have been forecasting that a “sufficient progress” declaration would lead to strong gains for the British currency into year-end.

The technical picture has also been bullish, with one analyst writing Friday that the Pound could be on route to 1.3550 against the Dollar, while also suggesting the Pound-to-Euro rate may break above 1.1500 over the coming days.

“EUR/GBP has recovered this week following failure to register a weekly close below its 55 week moving average. But yesterday charted an outside day to the downside suggesting upside momentum has dissipated,” says Karen Jones, a technical analyst at Commerzbank.

“Recent developments in the Brexit negotiations continue to support our view that the UK is ultimately headed for a softer Brexit. This is likely to provide ever more support to our constructive view on sterling which we have expressed through higher GBP/CHF,” writes Kamal Sharma, a strategist at Bank of America Merrill Lynch, in a note this week.

Friday's declaration of sufficient progress is positive news for the overall trajectory of Brexit negotiations but, with the obvious complications aside, it might not bring much respite for embattled Prime Minister Theresa May.

This is after Conservative Party rebels enlisted the opposition Labour Party and other MPs to defeat the government in a vote over a controversial amendment to the European Union Withdrawal Bill. (See Below).

Parliament passed an amendment to the European Union Withdrawal Bill that gives lawmakers the power to force the government choose between a “soft Brexit” and what might mean an effective suspension of Article 50.

Such are the implications of the so called “amendment 7” (clause 9) that was backed by six senior Conservative Party rebels, after being tabled by the former Attorney General Dominic Grieve, once Britain’s most senior lawyer.

The amendment requires the final deal struck by Prime Minister Theresa May to be approved by a separate act of parliament before it can take effect. Article 50 of The Lisbon Treaty, which governs the withdrawal process, states a member state may leave the EU in accordance with its own constitutional requirements.

And this, ladies and gents, is what yesterday was all about: https://t.co/HvbSR4slCK

Passing late on Wednesday night in the House of Commons, with 309 votes to 305, the amendment couldn't have happened without the support of Conservative Party rebels. It is a defeat for the government and a blow to Prime Minister Theresa May's authority.

“At the time of writing, EU and UK officials are meeting to rubber stamp "sufficient" progress in the phase 1 talks and to proceed to phase 2 on trade. More significantly in our view was the government's defeat on Amendment 7 of the EU Withdrawal Bill which now gives Parliament a "meaningful vote" on the final deal,” BAML’s Sharma adds.

Hopes and fears are that “amendment 7” will mean following through on the Article 50 notification, with a Brexit, could become difficult in March 2019 if lawmakers haven’t signed off on the new relationship agreement struck by May at this time.

“Clause 9, page 6, line 45, at end insert “, subject to the prior enactment of a statute by Parliament approving the final terms of withdrawal of the United Kingdom from the European Union.” Member’s explanatory statement To require the final deal with the EU to be approved by statute passed by Parliament,” the amendment reads.

“Any Member State may decide to withdraw from the Union in accordance with its own constitutional requirements,” reads the first clause of Article 50, The Lisbon Treaty.

Critics have said the amendment will strengthen the hand of Brussels and weaken the UK at the negotiating table because Brexit could easily be delayed. European Parliament lawmakers appeared happy with the outcome Thursday.

British Parliament takes back control. European and British Parliament together will decide on the final agreement. Interests of the citizens will prevail over narrow party politics. A good day for democracy. https://t.co/yV6e6FjWWG

If valid, this interpretation of the amendment could enable the opposition and rebels to send Prime Minister Theresa May back to Brussels to renegotiate a different deal if they don’t agree with it. This might mean part of parliament is able to force the UK to remain a member of the single market and customs union.