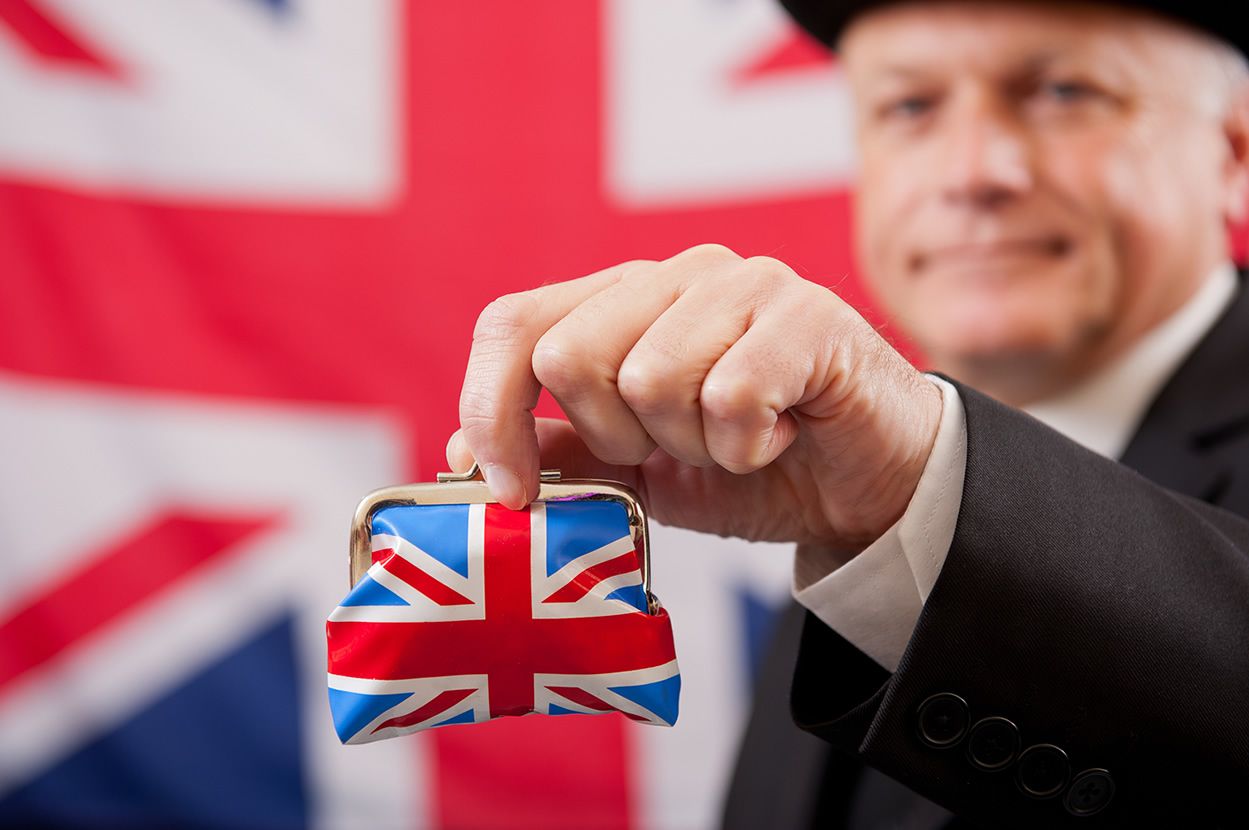 Coverage of the British Pound's reaction to the Bank of England's November policy decision and Inflation Report bringing the views of the most prominent analysts in the financial sector.

The Bank of England have raised interest rates to 0.50% with seven of the nine-person Monetary Policy Committee voting for such a move which was widely-expected to be a positive for the Pound.

However, the Pound has promptly plunged on the outcome and looking at the markets it appears the currency might be about to suffer its worst one-day decline of 2017 against the Euro.

The selling pressure confirming our warnings made ahead of the event that there might be a "sell the fact" reaction to this well-signposted move on interest rates.

In their "cheat-sheet" - which we covered ahead of the event - analysts at TD Securities more or less got it right in saying that on an expected 0.25% interest rate rise Sterling would decline unless some notably 'hawkish' guidance on future interest rate rises was delivered.

In the event, the Bank kept a consistent message that interest rate rises in the future would be needed but much depends on Brexit and economic data and importantly the guidance was left rather open-ended.

When asked by a journalist whether we are at the start of a new interest rate rising cycle Governor Mark Carney did confirm that the economy needs two additional interest rate rises to get inflation back to target.

So on paper, all that was said was positive for Sterling but it must be emphasised that markets wanted to hear some incredibly positive news to really trigger a sustained rally, and of course in the current climate this was never going to happen.

So the deep declines in the Pound - 1.67% against the Euro and 1.5% against the Dollar - are looking looking overdone. 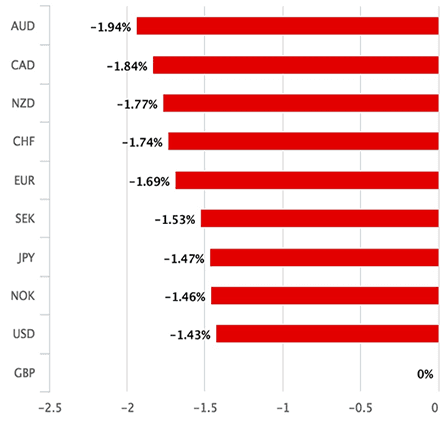 Above: The Pound's moves against the major currencies by the close of London trade was substantial.

Markets got confirmation in the accompanying statement that "all members agree that any future increases in Bank Rate would be expected to be at a gradual pace and to a limited extent."

The Bank removed the view that interest rates would rise "faster than the market expects" from the guidance - it was this particular line that signalled to markets back in September that a rate rise was imminent.

“It’s no surprise that the Bank of England has taken the historic decision to hike rates for the first time since the financial crisis. But the big news is that the Bank is no longer telling markets that their rate expectations are too low,” says James Smith, a developed markets economist at ING Group.

"While the 7-2 split in favour of raising rates (with Sir John Cunliffe and Sir David Ramsden dissenting) was more hawkish than the consensus had expected (6-3), our initial feeling is that the overall tone of the summary, minutes and Inflation Report is fairly dovish," says Paul Hollingsworth, Senior UK Economist with Capital Economics.

In its Inflation Report, the GDP forecast for 2018 was revised down marginally compared to the previous forecast in August.

The unemployment forecast was revised down and the inflation forecast was somewhat revised upwards for 2017 but marginally down for 2018 while the BoE still expects inflation to overshoot the 2% target through Q4 2020.

In the press conference following the event Carney said today's decision is straightforward as inflation is unlikely to return back to the 2.0% target without some rise in interest rates.

Carney emphasises that UK productivity remains incredibly low, despite high inflation. Yet with the UK economy's long-term growth rate seen as much lower, it is believed only small amounts of declines in unemployment will raise wages and therefore inflation.

The Governor says the time has therefore come for the Bank to take its "foot of the accelerator" noting that while the rate of economic growth is slower, it is not subdued.

Our big takeaway from the day with regards to the future of interest rates and the value of the Pound are that it all comes back to inflation. The Bank will keep reacting to inflation levels and will do whatever necessary to achieve 2.0% so we will watch incoming data with interest. If inflation comes in above expectations over coming months expect the Pound to move higher.

If inflation starts slowing faster than consensus expects, then future interest rate rises will be rapidly priced out of the market and Sterling will be pointed lower.

Above: Watch the Press Conference. 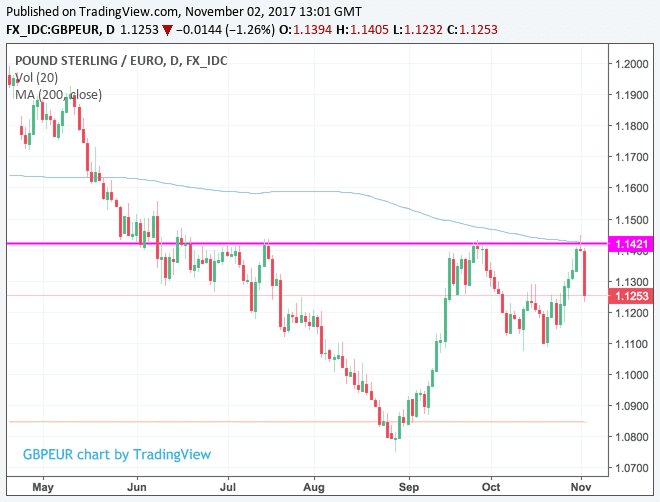 Above: The bar for further gains in GBP/EUR was incredibly high judging by the significant amount of resistance that needed to be overcome. We see the resistance line and 200-day moving average providing a significant hurdle. 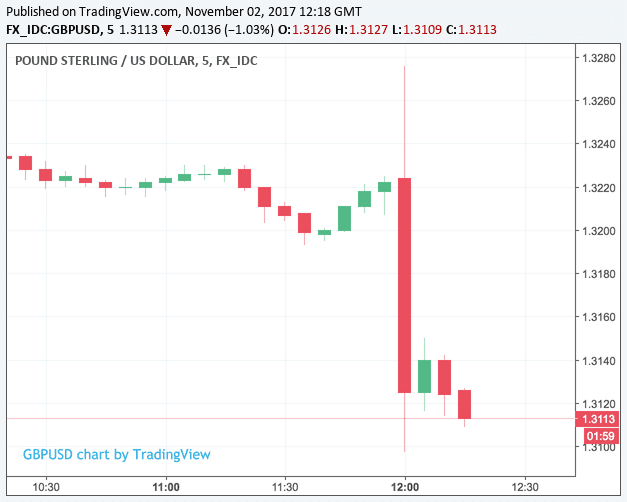 Above: Sterling takes a dive against the Dollar in the wake of the BoE decision to raise interest rates.

"The BoE has now crossed the Rubicon and it won’t take much for expectations to shift. Despite having managed to illicit a dovish response, it is unlikely that this will endure beyond the near-term."

"The combination of inflation stabilising, real income growth improving and the likelihood of a transition deal leave us unconvinced that the rates market is accurately priced. We currently see one further hike priced for next year and one further one beyond."

"Pound 1% sell-off to Bank of England is an overreaction. Don't underestimate role of GBP in policy thinking. 'Carney Put' means GBPUSD 1.35 is still on."

Basically we think that while #GBP may have got 'dumped' by its 'unreliable boyfriend' today... he'll come crawling back! #BankofEngland https://t.co/qcieMEuNjY

"The fact that inflation is expected to be only just above the MPC’s target at the end of the three-year forecast horizon seems to endorse the markets view that there will be only another two hikes over the same period.

"The MPC also sounded a bit more downbeat on the impact of Brexit on the economic outlook than before, while all members continued to agree that any future increases would be “at a gradual pace and to a limited extent”.

"Nonetheless, we think the dovish market reaction looks a bit overdone, given that the MPC’s growth forecasts are broadly unchanged from August."

"Conscious that potential UK growth is likely lower as a result of Brexit, persistently above-target inflation is their justification for today’s move. However, once the effects of sterling depreciation pass out of inflation calculations, the still-weak growth and output profile offer little support for a more prolonged tightening cycle.

"Before today, market pricing for rate hikes over the next two years by the MPC equalled that for the Federal Reserve. The logic behind these expectations is sure to be tested and we believe Sterling weakness in response to this dovish hike is more than justified."

"We had warned clients against getting too aggressive with short-term bullish bets in the lead up to Thursday’s BOE decision, highlighting a BOE motivated to raise rates for difficult reasons (inflation), in an economic backdrop contending with Brexit uncertainty and renewed US Dollar demand.

"At the same time, our worst-case Brexit projections pre-EU Referendum were 1.1500-1.2000 and while the negotiation process may drag on, we believe we’re well off a worst case scenario outcome, making the Pound a highly compelling investment in the 1.2500-1.3000 area when considering longer term cyclicals."

"Today’s rate hike should not be seen as the start of a tightening cycle, just a tentative withdrawal of some of the stimulus that was provided after the 2016 EU referendum. Longer out we expect the slowing real economy to pull inflation below target, and the Bank of England is therefore expected to leave its policy rate unchanged throughout 2018 and 2019."

Nordea Markets are bearish on Sterling's outlook and see further declines coming against the Dollar and Euro.