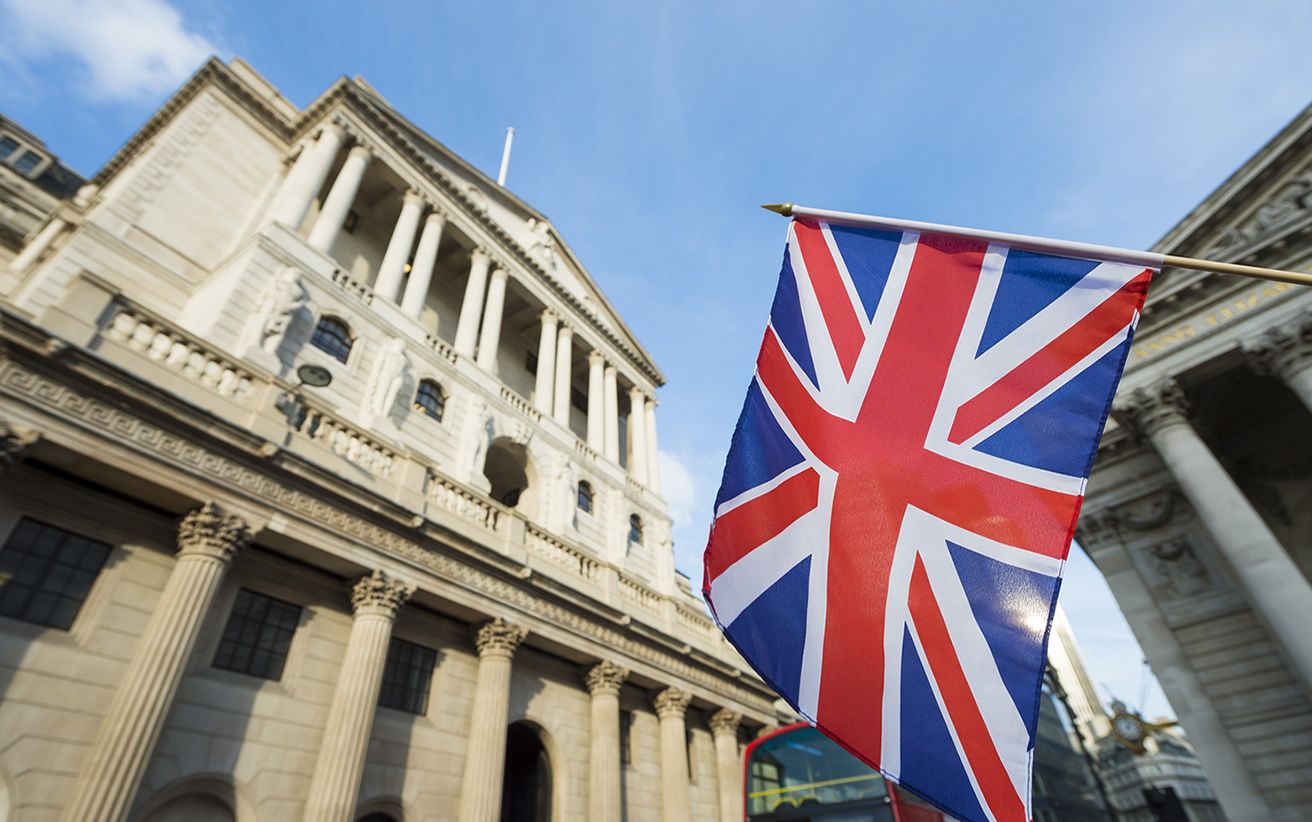 Is the Bank of England about to make a policy mistake by raising rates? The question is incredibly important for where the British Pound  trades over coming months. We look at the arguments.

If the answer is yes, this is a mistake, then only one interest rate rise is likely as the Bank of England soon realise the economy needs lower interest rates to remain supported. Expect the Pound to embark on a downward path as markets discount the potential for further rates.

If the answer is no, this is no mistake and the Bank is right to lift interest rates from record lows, a second and perhaps even a third rate rise are likely in coming months. This will fuel the Pound’s recovery into 2018 and provide a solid floor under recent moves and signal the worst has now passed.

There are two schools of thought - one believes that it is wrong to raise rates at a time when UK growth appears to be cooling, and another which points out that in fact the UK economy is growing and with unemployment and multi-decade lows it is only a matter of time before wage-driven inflation becomes a serious threat.

Their view is that an economy that requires 'emergency low' interest rates should be in an emergency situation i.e. recessionary. And, the punishment of savers cannot continue; the incentive to save must be reestablished.

The question of policy mistake arises because the Bank is seen raising interest rates just as UK economic momentum fades - the economy is by no means in serious trouble - but nearly all those who believe now is not the time to raise rates believe Brexit will continue to create the uncertainty that will undermine economic momentum over coming months.

Fresh in the minds of economists and markets is the great policy mistake from the European Central Bank of 2011 when ECB President Jean-Claude Trichet and his team raised interest rates and promptly flat-lined the Eurozone economy.

Despite the Eurozone economy battling with high unemployment, low growth and sovereign debt crisis, the ECB raised interest rates in April and again in July eyeing rising rates of inflation.

European economic growth promptly stalled and the Eurozone’s debt crisis deepened. The question is whether the Bank of England is repeating a similar mistake in 2017?

Governor Carney was particularly clear in his August press conference that when interest rates started rising, it would be the start of a gradual cycle, not a single “one and done” hike.

His language was based around the MPC’s view that “monetary policy could need to be tightened by a somewhat greater extent over the forecast period than current market expectations”.

The question for markets and Sterling is whether this line is to be repeated again at the November meeting.

This is a Mistake: The Bearish GBP Views

“For investors, the key question is whether or not there will be further hikes next year. Market expectations are for at least one further 25bp hike next year. In contrast, we think the MPC will be making a mistake by hiking now, and that they will recognise this in the coming months.

"We expect the BoE to hike because of what they have said. But we do not think the data support a hike. Combining that with our economic outlook we do not expect the BoE to end up following with a second hike in 2018. We expect this to be a 'one and done' hike in practice even if the BoE do not sell it that way. The question for Thursday though is what the BoE thinks and how it sells it."

“So is this hike ultimately an attempt to stabilise the Sterling and hence inflation? If so, then it could be too much too late from Bank of England, as FX effects on inflation will start to abate already in the coming quarter.

“And if Bank of England considers the input from more or less any other economic indicator, there is basically no reason to hike rates. House price momentum is weak, which slowly but surely will spill over to weaker consumption. So it may sound like we are stuck on repeat here, but don’t buy into the current Bank of England pricing. This week’s hike could easily end up as a one-off.

“The bottom line is that we remain sceptical towards the GBP on a 4-6 month horizon and hence see upside in EUR/GBP and downside in GBP/USD.”

“The latest GDP report was firmer than expected and reiterated the view that a rate hike will be delivered next week, but still in  combination with the overall soft level of growth, uncertainty around the erosion of slack in the economy and no signs of building domestic wage pressures, we expect the BoE to deliver a cautious message alongside the rate hike. The number of dissents will be important to gauge the magnitude / speed of additional rate hikes.

“We reiterate that any rate hike next week should not be viewed as the start of a tightening cycle and is likely to be one hike followed by an extended pause as BoE strives to strike a balance between arresting inflation and making sure they do not derail growth momentum.”

“Sterling’s upside margin could be limited, as in the Inflation Report due to be published together with the BoEs’ decision, growth forecasts could be revised down, letting on that the following hike could be somewhat delayed, and in any case be bound to developments on the Brexit front, which will be the main drivers of growth in the coming quarters.”

This is no Policy Mistake: The Bullish GBP Views

"Understandably the MPC is concerned about inflation overshooting through the forecast horizon and supply falling. But it will need both political agreement on Brexit transition and further evidence of improving pay growth to prevent the decision being seen as a policy mistake."

Deutsche Bank are bullish Sterling into year-end on the belief some kind of transitional deal will be agreed by Brexit negotiators.

“In its statement, the Bank likely will want to dispel expectations of a one-and-done hike and encourage the pricing of a gradual hiking cycle, engendering a sell-off in short-term rates and strengthening the GBP.

“The MPC sees a progressive erosion of slack and lower trend growth as reasons to hike and defend the purchasing power of the currency, and, following this logic, a single rate hike priced in for 2018 would be too little.

“We expect the BoE to deliver a 25bp rate hike and dispel expectations of a one-and-done hike. We expect GBP to appreciate as a result.

“We expect Governor Carney to suggest that this hike represents the first step in a gradual normalisation cycle driving GBP higher.”

Barclays advocate a “long GBP” versus the Yen as a result.

“It is not clear to us that UK growth is about to falter suddenly. There may be further Brexit negotiation uncertainty, but there is arguably a lot of it already. Instead, we prefer to trade with conviction the idea that this is not a policy mistake and that the BoE is on a hiking cycle.”

"GBP will be among the big movers ahead of the BoE’s inflation report. Investors are expecting a ‘dovish hike’ from the MPC that could leave the pound vulnerable to any deterioration in the UK outlook or intensification of Brexit uncertainty. We are more constructive and expect the BoE to signal it is ready to hike rates again to fight any persistent inflation overshoot on the back of renewed GBP weakness."

“Our conviction of a second hike remains fairly high. This is driven, in part, by the Bank of England’s own analysis in their August Inflation Report.

“We expect continued messaging that rate hikes will be dependent on the evolution of the economy vis-à-vis the Inflation Report projections. Our core view is that the MPC will hike once next week, and again in February 2018 (with a chance that hike slips to May 2018), before stepping back to the sidelines as Brexit negotiations near an (initial) finish line late next year.”

“However, we think that the risk of three hikes between now and the end of 2018 is greater than the risk of a single hike in November.”

"Assuming we get a 25bp rate hike this week, we would only expect GBP to move lower if there were (a) more than two dissenters or (b) an explicit statement ruling out another rate hike in the near-term – both of which would see the UK rate curve flatten as markets price out additional BoE tightening. The latter option seems highly unlikely – and somewhat inconsistent with typical central bank forward guidance that aims to retain an element of policy flexibility."

“We think the BoE would be wise not only to hike once this week, but to begin a gradual tightening cycle over the coming years.

“Instead of cutting back on spending as inflation is temporarily rises above wages, households are leaning on their balance sheets, borrowing more and saving less, in order to finance their increasing real demand. Solid employment gains, record real household net wealth and cheap credit enable them to do this.

“If left unchecked, households are set to borrow more than they can afford and save less than they will need for the future. Meanwhile, uncertainty from Brexit seems to be weighing on supply more than demand.

“Without higher interest rates, continued excess demand growth will cause domestic inflation to remain well above the BoE’s 2% target even as the temporary effects of imported inflation from a weaker Sterling fade. By incentivising households to borrow less and save more, higher rates can take some steam out the inflation cooker.”