"Damn it - there's still no sign of a slowing in the pace of core price rises that would enable the MPC to pause its rate hiking cycle" - Samuel Tombs, Chief UK Economist at Pantheon Macroeconomics.

The British Pound fell against the Euro, Dollar and other major currencies following some hotter-than-expected UK inflation data that suggested the Bank of England could not yet afford to quit its interest rate hiking cycle.

Typically such an outcome would support the Pound, but we warned in our week-ahead preview that the market could now view stronger-than-expected inflation as a negative, as surging prices and interest rates would devour the UK's economic growth potential.

The UK is the poster child of stagflation - an economy beset by surging inflation and absence of growth - an unsupportive environment for the Pound.

Headline CPI inflation read 11.1% year-on-year in October as it accelerated past September's 10.1% and easily beat a consensus estimate for 10.7%. 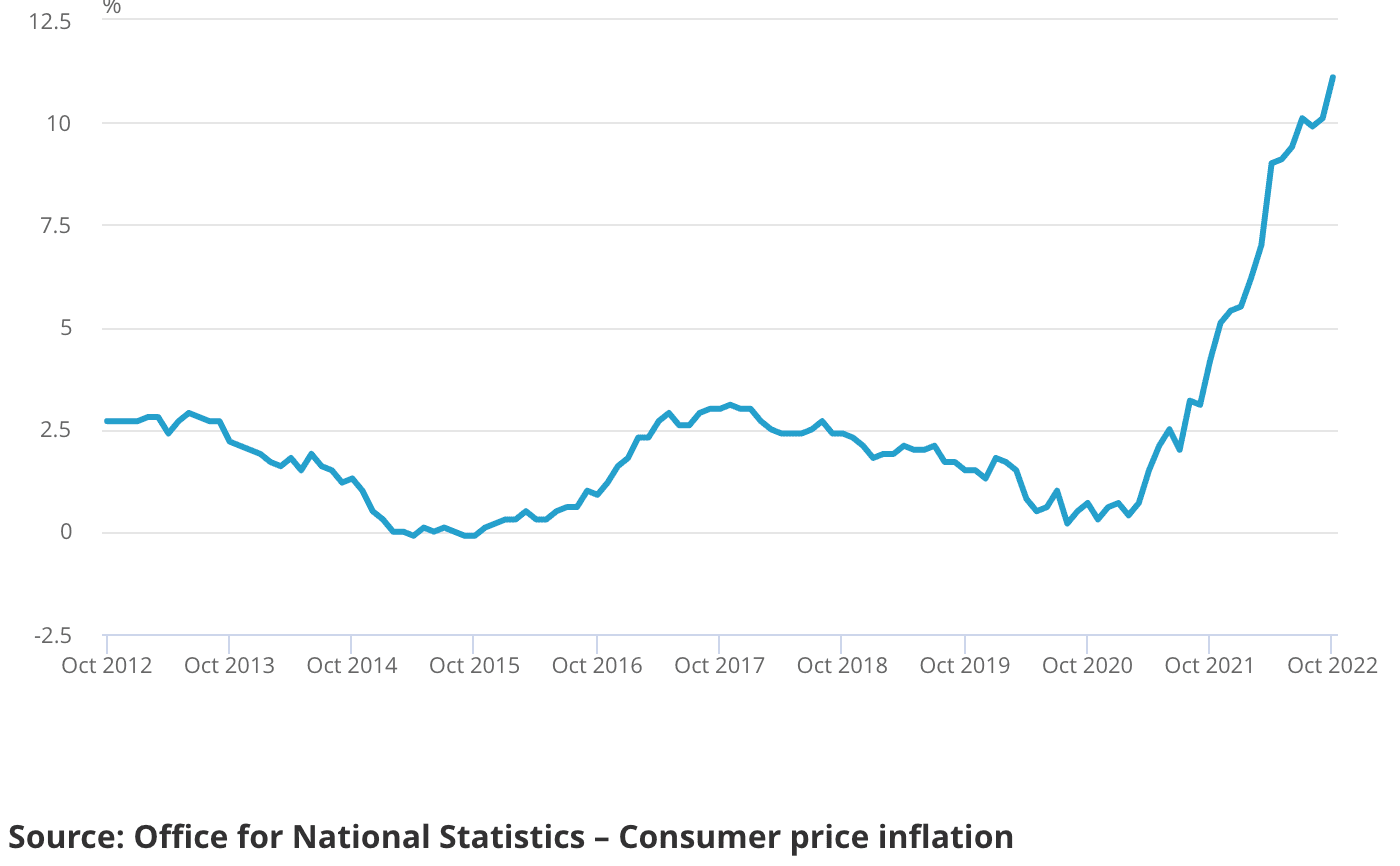 Core inflation - that gives a better account of 'homegrown' inflationary pressures - rose 6.5% in October said the ONS, unchanged on September but ahead of consensus estimates for 6.5%.

This is three times higher than the Bank of England's mandated target of 2.0% and means the Bank has little choice but to continue raising interest rates.

"Damn it - there's still no sign of a slowing in the pace of core price rises that would enable the MPC to pause its rate hiking cycle," says Samuel Tombs, Chief UK Economist at Pantheon Macroeconomics.

The Pound to Euro exchange rate fell back to 1.1418 in the minutes following the data release, having been at 1.1443 just prior.

The Pound to Dollar exchange rate dipped in the immediate aftermath of the release, falling to 1.1855, having been at 1.1880 ahead of the release. 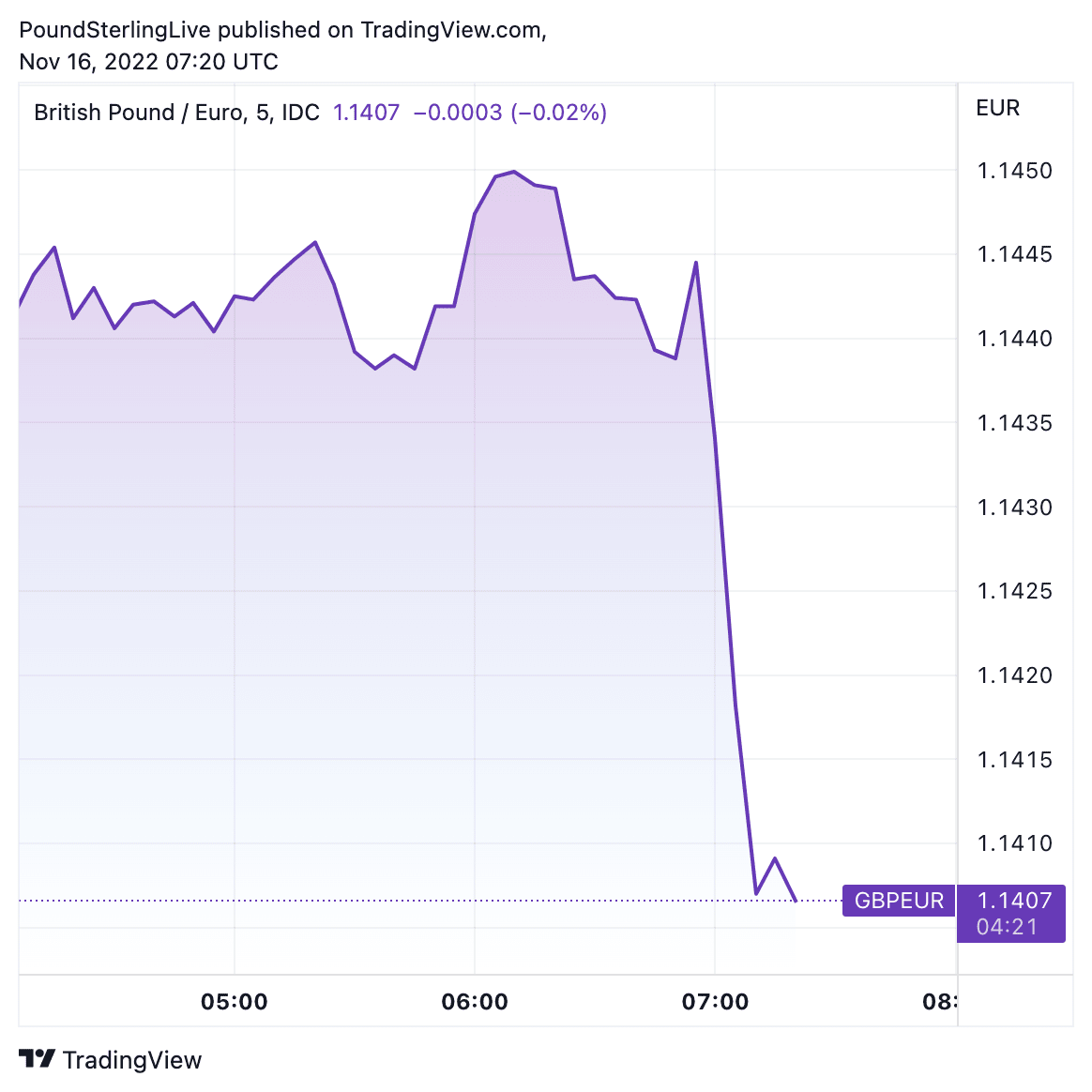 Food & drink prices drove the surge in prices owing to a 16.4% year-on-year increase, the biggest increase for this category since 1977.

The surge was also driven by the rise in energy prices following October's Ofgem price rise. It is worth noting inflation would have been closer to 13.8% were it not for the government's Energy Price Guarantee which caps the rate at which households pay for energy.

Ahead of the CPI release markets were pricing odds of 65% for a 50 basis point hike at the Bank of England next month, with the odds of a 75bp hike seen at 35%.

In the aftermath of the inflation release, the odds of a 50bp and 75bp move are now 50-50%, confirming markets have raised their expectations for a more forceful response from the Bank.

The Bank cannot pretend price pressures are easing as the 0.7% month-on-month rise in the core CPI exceeded its average October increase in the 2010s by 0.5 percentage points, says Tombs, that's a bigger overshoot than in prior months: 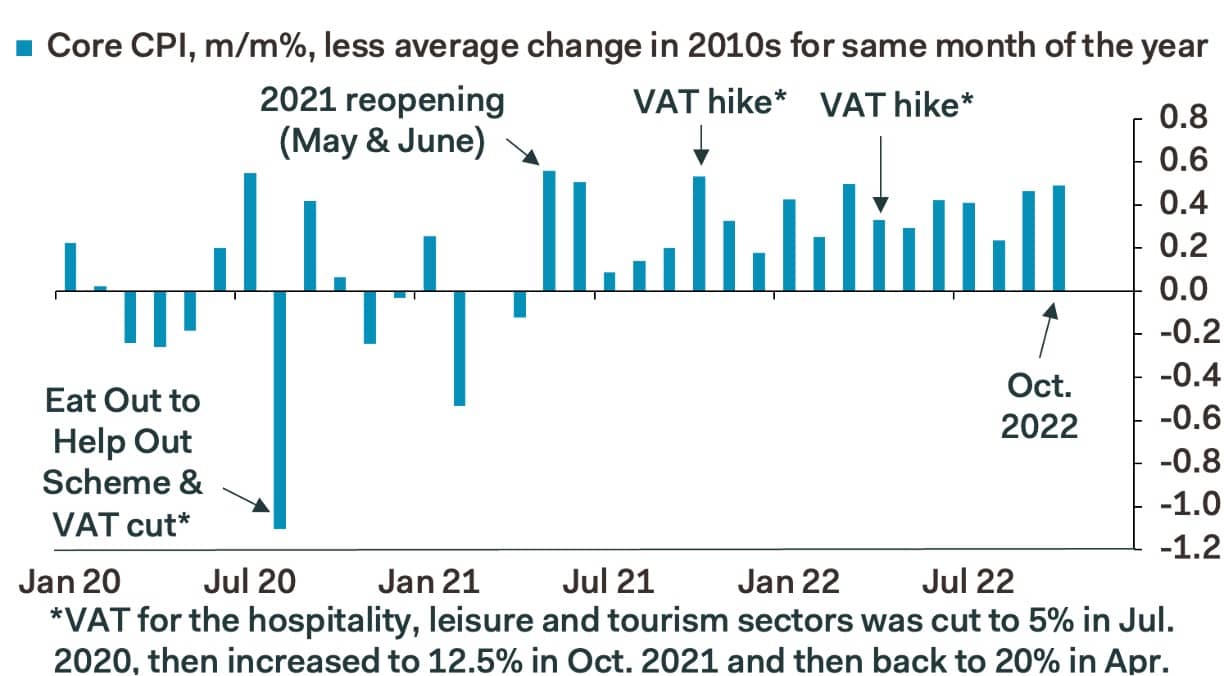 The UK economic outlook remains challenged by rising prices and interest rates, with more pain to come on Thursday when Chancellor Jeremy Hunt announces a fresh round of tax hikes and spending cuts.

"We doubt today’s CPI will have much bearing on GBP given the UK Government’s budget update tomorrow. We think the budget could be more meaningful for BoE rate hike expectations and therefore GBP," says strategist Kim Mundy at CBA.

The Pound has received some external support from the sudden fall in the U.S. Dollar over recent days following a decline in U.S. inflationary pressures, therefore much of the recent strength in the domestic currency has little to do with domestic fundamentals and all to do with external developments.

The global context will therefore continue to be of great importance to the Pound over coming days and into year-end.