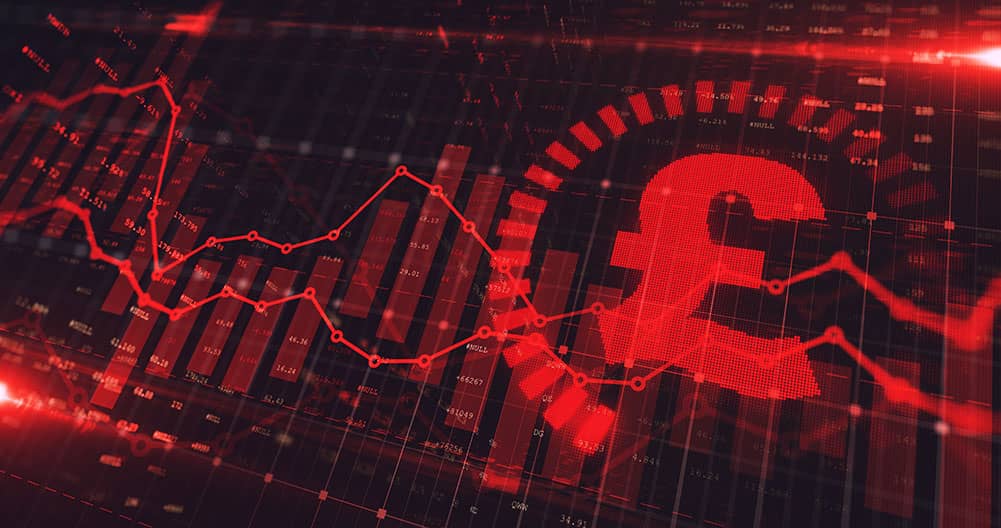 The British Pound is reacting to broader global risk sentiment and Thursday's movements will therefore likely depend on the direction taken by the world's equity markets which are nursing losses following a number of developments midweek.

At the start of the day the UK currency is moving higher in tandem with improved investor sentiment following steep losses the day prior.

Monday saw the Pound jump higher in sympathy with the positive investor mood on display in global equity markets, but these gains were reversed on Wednesday amidst a broader market selloff that centred on China and disruptions in the cryptocurrency space.

Chinese authorities pushed back against persistent rumours they were considering easing strict Covid measures while selling picked up pace after it was announced cryptocurrency exchange Binance would not rescue troubled rival FTX.

FTX is the world's third-largest exchange, making its demise a significant moment for the industry. Selling pressures right across the crypto space can have contagion effects when they reach significant levels, and it appears this was the case midweek amidst an 8% selloff in Bitcoin being reflected in major indices.

With little on the UK data docket, the Pound remains a play on broader sentiment, confirming its 'high beta' status remains intact at a time of high financial market instability.

Therefore, today's U.S. inflation data and further news from the crypto space will be watched closely.

"GBP has been heavily influenced by broader risk appetite this year," says Dominic Bunning, Head of European FX Research at HSBC, "equity movements are generally the dominant driver of GBP". 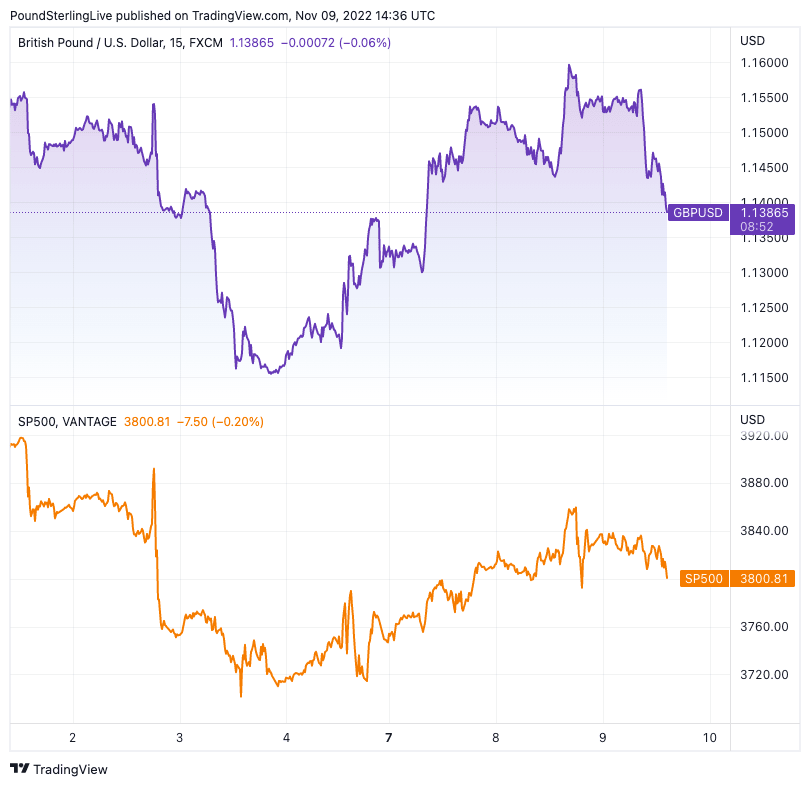 The above chart shows the Pound's fortunes in relation to the S&P 500, widely considered the bellwether for global investor sentiment.

The Pound's movements reflect developments in this stock market, therefore what happens here could well determine how the Pound evolves over the remainder of the year.

The Pound to Euro exchange rate fell close to a percent midweek to reach 1.1350 and has since recovered to 1.1390 at the time of writing, taking euro rates on offer at typical banks to around 1.1162 and those at competitive payment providers to around 1.1356.

The Pound to Dollar exchange rate was down over a percent at 1.1350 before recovering to 1.14, taking bank payment rates to around 1.1175 on Thursday and those at specialist payment providers to around 1.1370.

"A currency is referred to as 'high-beta' if it is sensitive to global risk appetite," says Kamal Sharma, currency strategist at Bank of America. "GBP's sensitivity to world equity market has risen... about 35% of the currency's fluctuation can be explained by changes to the equity index"

In addition to cryptocurrencies, key market drivers to be aware of include 1) Federal Reserve policy expectations and, 2) rumours over a potential ditching of the zero-covid policy by Chinese authorities.

1) The Federal Reserve policy outlook will take a big directional cue from this afternoon's U.S. inflation data, due at 13:30. A reading of 8.0% is expected, anything less and stocks could receive a sizeable boost.

Such an outcome could prompt a rally in the Pound, across the board. Beware a stronger-than-expected reading as this could push Fed rate hike expectations higher and exacerbate recent market selling pressures.

2) The Chinese reopening story is one that has boosted risk as investors hope the world's second-largest economy could stage an economic recovery as restrictions were loosened.

But, there has been no official confirmation of such an outcome, and with a potentially tough winter ahead the reopening story could be one for 2023.

"China just can’t catch a break, with local stock markets resuming their falls at the start of this week after officials denied reports that the country was dropping its Covid Zero policy," says Fawad Razaqzada, Market Analyst at City Index. "Cases have surged in the manufacturing hub of Guangzhou".

Razaqzada says there may well be further growth-chocking lockdowns to come. "This has been among the reasons why China’s economic growth has been so weak this year and it is precisely what investors are worried about again".

For the Pound, all this negativity adds up.

"Our call for a difficult, not benign external environment should see sterling soften again," says Chris Turner, Global Head of Markets and Regional Head of Research for UK & CEE at ING Bank.

Foreign exchange analysts meanwhile retain a cautious approach to the Pound over the coming weeks.

"We continue to favour some sterling underperformance going into year-end," says Turner.

"Tight UK fiscal budget on 17 November could be the catalyst to wipe a lot more off the expected Bank of England tightening cycle than is to come off the ECB cycle," he adds.

The next key domestic event for the Pound is therefore the November 17 Autumn Statement, where a raft of tax hikes and spending cuts will be announced, with the aim of restoring UK fiscal credibility.

Such credibility underpinned the Pound's October recovery from the September lows, which followed the mini-budget of previous Prime Minister Liz Truss.

But fiscal austerity promises to lower the UK's growth potential over coming years, and this could weigh on the Pound as a result.

It also lessens the pressure on the Bank of England to pursue a more aggressive path of interest rates hikes, potentially depriving Sterling of support via the rates channel.