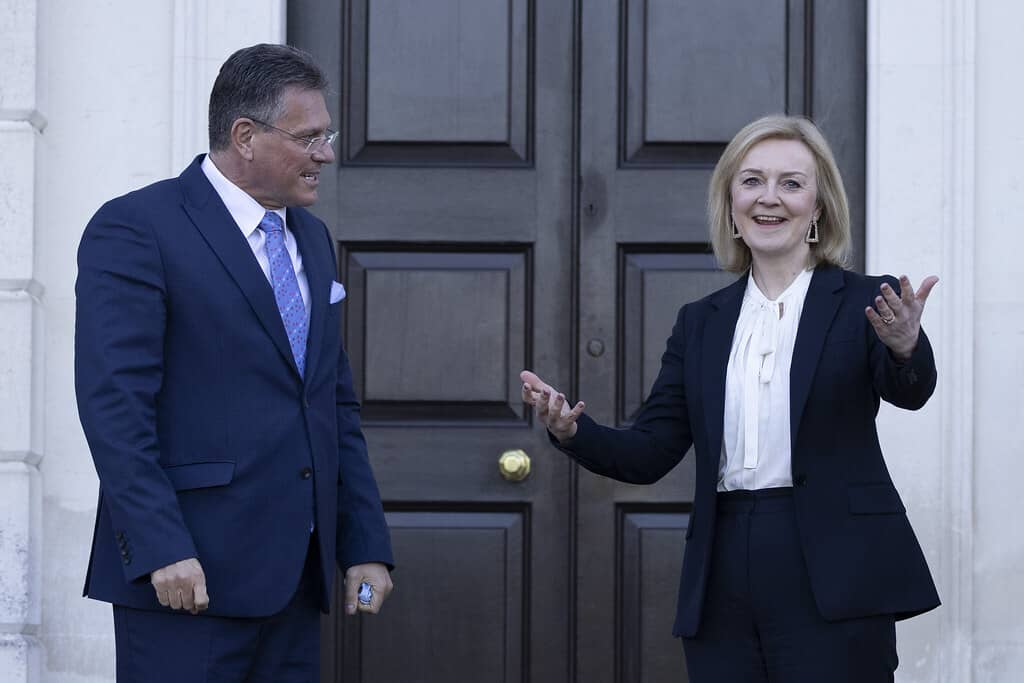 The British Pound is seeing a strong start to 2022, with gains against the Euro coming in the first week and a strong advance against the Dollar recorded in the second week of the new year.

An assessment of the factors underpinning Sterling's advance reveals that the outlook could stay constructive over the short-term, a view maintained by a number of strategists we follow.

"GBP/USD is on the brink of a break clear of a long-term descending trend channel, which would be a bullish sign of further upside potential," says analyst George Vessey at Western Union Business Solutions.

Regarding Sterling's fortunes against the Euro, strategists at CIBC Capital Markets anticipate GBP/EUR will head towards 1.2080/1.2074, meanwhile ING's analysts are eyeing a move to 1.2050.

"I remain positive on the GBP and bearish EUR/GBP but a touch more cautious on the latter given the recent move in EUR/GBP," says Jonathan Pierce at Credit Suisse.

Stephen Gallo, Head of European FX Strategy at BMO Capital Markets says he is looking to sell the Euro and buy the Pound on any bouts of strength in EUR/GBP during 2022.

"Short EURGBP exposures make fundamental sense. While the speed of the move suggests the pair is slightly oversold, we would not be looking to aggressively fade it now. Rather, we'd continue to add to the position on rallies," says Gallo.

"The Teflon Pound" is how ING strategist Francesco Pesole describes the UK currency which has advanced amidst rising political anxieties concerning the future of Prime Minister Boris Johnson.

Johnson came under significant pressure from the media, opposition parties and some within his own party to resign after it was revealed he attended what amounts to an illegal gathering in the Downing Street gardens in May of 2020.

But so far the Pound has proven immune to the developments, suggesting there would be little truly 'game changing' for the UK economy and sentiment whether Johnson stays or is replaced a Conservative colleague.

"The chances of UK PM Johnson resigning are rising, but the pound appears immune to political noise and might not suffer from a change of leadership in the country. If anything, new Brexit negotiations bear bigger risks," says Pesole.

Northern Ireland and Brexit: Less of an Issue

On the matter of Brexit, the issue is proving less of a headline risk to the currency than was the case prior to December 2019 when a deal was finally struck between the two sides and the UK exited.

News that Northern Ireland businesses are adapting well to existing protocol issues will cool temperatures around this thorny issue between the UK and EU, just as negotiations on amending the protocol restart.

A survey by Manufacturing NI found that less than a quarter of its members were struggling with the rules contained in the Northern Ireland protocol, which governs trade in the region.

This compared with more than 40% six months ago.

Foreign Secretary Liz Truss met her opposite number Maros Šefčovič on Thursday and the first joint statement between the two sides was issued on Friday morning.

This in itself represents a shift in relations.

The two sides agreed to intensify talks over coming weeks.

"The UK Foreign Secretary, Liz Truss enters the latest round of post-Brexit negotiations over Northern Ireland. Liz is facing a tough choice between picking a fight with the EU which would gain the support of the conservative party, or cutting a deal to prevent a trade war," says a note from Silicon Valley Bank.

Given the aforementioned news that businesses are adapting to existing rules and that the EU has already put some concessions on the table, the prospects of talks failing and a trade war ensuing are low at this juncture.

The Bank of England: Still the Single Most Important Influence

The ultimate driver of Sterling though in the near- and longer-term remains Bank of England policy, which is in turn determined by the strength of the economy.

Currently money markets are pricing for a February rate hike and further hikes that would take Bank Rate to 1.0% by year-end as the Bank seeks to quell rising inflation in an economy that could already be back to full employment.

This suggests a steep rise for rates relative to other countries and is proving supportive of the Pound.

"Sterling appreciated against EUR as well as against USD over the past weeks. Of course, attention is focussing mainly on monetary policy and the Bank of England’s surprise rate hike in December which provided support for Sterling," says You-Na Park-Heger, an analyst at Commerzbank.

A risk to Sterling's advance is the Bank of England opts to avoid raising interest in February, and/or guiding the market to lower expectations for future rate rises.

If the market's existing bet that rates will rise to a lofty 1.0% by the end of the year is challenged, then Sterling can decline.

"There could be some downside risks for sterling if Andrew Bailey does not meet market’s expectations and the BoE does not deliver the hikes that most economists are pricing in for 2022,” says Jesús Cabra Guisasola, Senior Associate at Validus Risk Management.

The Omicron wave has clearly peaked in the UK and daily positive case rates have been in decline for seven days in succession now.

On Thursday the UK reported 109K cases, down on the previous Thursday's 179K cases. 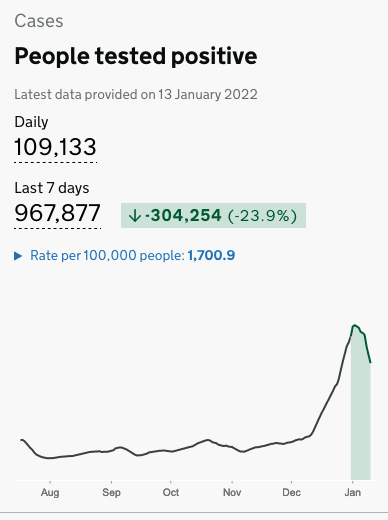 This puts the UK on course to see all restrictions removed on January 26, opening the door to a February economic rebound.

"At present many seem to be in agreement that the negative effects on the economy will be reasonably limited and can be overcome quickly. And this would also mean that a further BoE rate hike in February would be quite likely," says Park-Heger.

"Sentiment for sterling is improving at both the prospect of a Bank of England raising interest rates and hopes that Covid-19 may now eventually enter it’s endemic stage. Sustained strength for the pound will be a welcome tonic for British consumers as it helps bring down the cost of imported goods and holidays at a time when inflation is ramping up," says Mike Owens of Saxo Markets.