The Pound put in a mixed performance on the first trading day of the new year, falling against the Euro but notching up fresh multi-month highs against an all-round weaker U.S. Dollar.

Sterling ended 2020 on a firm note, although the lacklustre response to the post-Brexit trade agreementreached by the EU and UK on Christmas Eve will have disappointed those market participants looking for a more decisive rally.

Indeed, the Pound had been expected by some foreign exchange analysts to move sharply higher in the wake of a trade deal being reached, but once confirmation of a deal came through the UK currency actually retreated in a 'buy the rumour, sell the fact' move and went lower.

"The uninspiring Sterling reaction to confirmation of a trade deal is looking like a classic case of 'buy the rumour, sell the fact'. After weeks, months, and years of back-and-forth, it seems the confirmation of the deal was mostly as expected by markets and as such is not a game changer for sterling. Other factors, most importantly Covid-19, will now once again begin to drive the outlook for the Pound," says Ranko Berich, Head of Market Analysis at Monex Europe.

The UK currency has since edged higher and given market participation has been thin over recent days owing to the holiday season, the return of traders on January 04 could see some more meaningful moves. 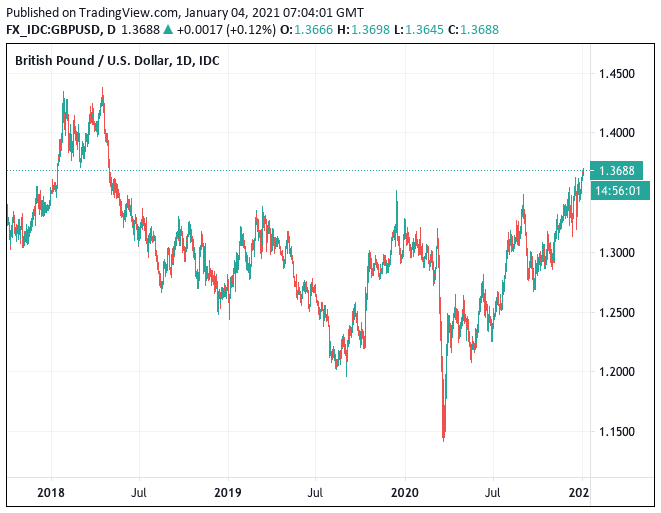 The UK economy has been beset by years of uncertainty over the future EU and UK relationship and the trade deal will allow some major investment decisions to come online. The Pound derives a significant amount of value from the inflow of foreign investor capital, and Sterling bulls will be hoping the deal will unlock some investment decisions that were previously put on hold.

The UK's current account deficit - a result of the country habitually importing more goods and services than it exports - is the primary reason why the inflow of foreign capital into the country is important for Sterling valuations on a fundamental basis.

The larger the deficit, the greater the amount of capital inflows required to keep Sterling stable.

Elias Haddad, Senior Currency Strategist at CBA, notes that the UK's annual current account deficit is however narrowing and now stands at 2.9% of GDP, which is the smallest since the first quarter of 2012.

The analyst says the narrowing of the deficit could prove supportive of Sterling in 2021.

"GBP/USD can trade closer to 1.4000 over the next few months following the Trade and Cooperation Agreement between the EU and the UK... GBP/USD is deeply undervalued relative to real interest rate and price deflator differentials," says Haddad.

One reason that Sterling has failed to find support following the sealing of a Brexit deal is that UK-EU trade faces a potentially significant structural shift now that the UK has exited the EU's internal market.

While the trade in goods will still be tariff free, there are some changes pertaining to customs declarations (forms must still be filled) and VAT tax.

For example, EU companies exporting goods into the UK will have to sign up with HMRC for the purposes of VAT, and some companies have already said they are discontinuing exports as a result of the increased administrative burden. How will this impact the UK's current account?

Current account data over coming months will show whether the current account deficit shrinks further as UK imports from the EU decrease, which could be a positive for Sterling from a fundamental valuation perspective. Of course UK exports to the EU could decrease too, but the EU exports substantially more goods to the UK than they import.

Haddad says there are two important headwinds for Pound Sterling over coming months.

The trade agreement does not include any elements pertaining to equivalence frameworks for financial services, which accounts for over 70% of UK economic activity.

Another negative factor that could limit Sterling upside is growing support for Scottish independence, which would generate a fresh source of political uncertainty.

"The possibility of another referendum on independence would significantly increase if the SNP do well in the next Scottish Parliament election scheduled to be held on 6 May 2021," says Haddad.

Should the SNP achieve a commanding majority in the vote, analysts would expect the pressure for a second independence referendum to grow further. While the UK government continues to reject such calls, it could prove more difficult should the SNP secure a sizeable mandate on a manifesto to take Scotland out of the UK.

Nicola Sturgeon, SNP leader, has said that a second independence referendum will be central to the SNP’s manifesto and that she anticipates a vote taking place “in the earlier part” of the next Scottish parliament, potentially next year.

Seventeen polls in a row have shown a desire for separation. The most recent, for Savanta ComRes, found that, when undecided voters were excluded, 58%of Scots would vote for separation. In 2014 Scotland rejected independence by 55% to 45%.