The Pound outperformed on Wednesday Dec. 30 as the UK-EU trade agreement was signed in Brussels and Westminster prepared to ratify it, while investors shrugged off a further holdup of much-needed fiscal relief in the U.S. and welcomed the UK's approval of Astrazeneca's coronavirus vaccine.

Sterling rose against all major currencies in a market that favoured risk assets like stocks and commodities on Wednesday after European Commission and Council leaders signed the UK-EU trade agreement in Brussels ahead of parliamentary votes planned for later during the session in London.

"The European Union stands ready to work shoulder to shoulder with the United Kingdom. This will be the case on climate change, ahead of the COP 26 in Glasgow, and on the global response to pandemics, in particular with a possible treaty on pandemics. On foreign affairs, we will seek cooperation on specific issues based on shared values and interests," says Charles Michel, former Belgian Prime Minister and current leader of the European Council. "These are major issues that will have to be discussed on a regular basis, like we do with our strategic partners, and I am looking forward to such a cooperation."

The House of Commons and House of Lords will vote Wednesday with a view to ratifying it before the Brexit transition period ends shortly ahead of midnight on December 31. Both the opposition Labour Party as well as the Conservative Party's Brexit-supporting European Research Group have said they'll vote in favour of the treaty, thus ensuring its path into law.

Meanwhile, in Europe, the treaty will be provisionally applied pending the ratification in London as well as a rubber stamp endorsement from the European Parliament, with the latter not expected until the New Year. "The decision adopted today on the signature and provisional application and the agreement itself will be published in the Official Journal of the EU in all languages and will be provisionally applied from 1 January 2021," the European Council says. 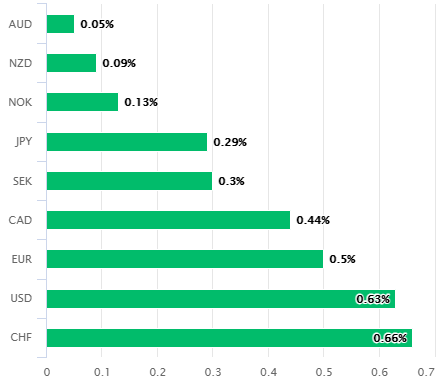 The agreement averts a trade cliffedge that had often been widely feared in the markets during the four years since the June 2016 Brexit referendum, thus reducing the immediate threat to Sterling, although it also gives rise to many medium and long-term uncertainties including in relation to the fate of Britain's dominant services industry.

"Our forecasts have GBP/USD trading 1.3700 in 2021, but the upside risks suggest that GBP/USD can trade closer to 1.4000 over the next few months," says Elias Haddad, a London-based strategist at Commonwealth Bank of Australia. "GBP/USD remains undervalued."

The Pound scored one of its more significant gains over the Dollar, rising 0.63% to 1.3576 on Wednesday while the Pound-to-Euro exchange rate was 0.50% higher at 1.1065, although both were below the highs seen shortly after the Brexit deal was announced last week. All Sterling pairs were higher while the Dollar and Euro were quoted lower against almost all of their major counterparts, with investors instead and otherwise preferring to bid for the likes of the Australian and New Zealand Dollars.

"Annual house price growth accelerated further in December, reaching a six year high of 7.3%, up from 6.5% in the previous month," says Robert Gardner, chief economist at Nationwide in an overnight statement suggesting the average house price rose to £230,920 ($313,473) in December. “The resilience seen in recent quarters seemed unlikely at the start of the pandemic. Indeed, housing market activity almost ground to a complete halt during the first lockdown as the wider economy shrank by an unprecedented 26%. “But, since then, housing demand has been buoyed by a raft of policy measures and changing preferences in the wake of the pandemic." 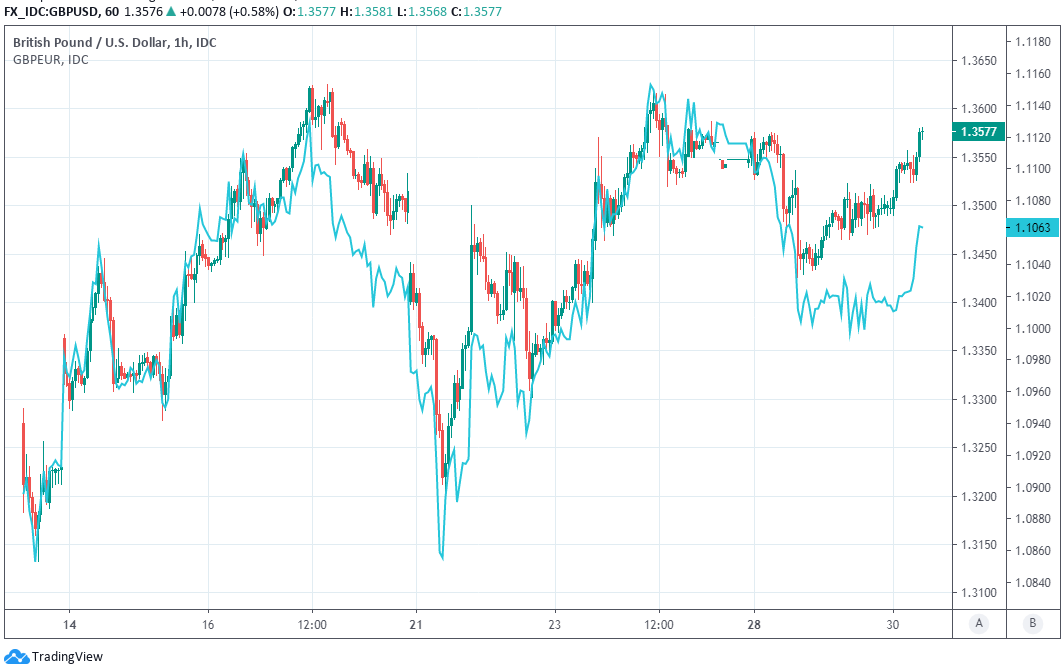 "GBP has risen back above 1.36 against the USD, with EUR/GBP sliding below 0.90, AUD/GBP easing below 0.56 and NZD/GBP to 0.5225. We’ve consistently thought a deal would take place and since late July we’ve held a 1.36 end-December forecast," says Gavin Friend, a senior strategist at NAB. "With the deal now agreed, we connue to hold the view GBP/USD can push on to 1.3750 in the coming days, but wait until 2021 for moves above 1.40. One factor liming GBP gains is the rapid spread and likely economic impact of COVID in the UK, including the new reported strain."

The UK-EU trade agreement follows in the footsteps of the coronavirus vaccine made by Astrazeneca and Oxford University, which was approved for use in the UK on Wednesday following a recommendation by the Medicines and Healthcare products Regulatory Agency (MHRA).

"Throughout this global pandemic we have always been guided by the latest scientific advice. Having studied evidence on both the Pfizer/BioNTech and Oxford University/AstraZeneca vaccines, the JCVI has advised the priority should be to give as many people in at-risk groups their first dose, rather than providing the required two doses in as short a time as possible," the government said in its announcement. "Everyone will still receive their second dose and this will be within 12 weeks of their first. The second dose completes the course and is important for longer term protection."

Astrazeneca shares were 0.59% higher at 7,505 pence as the government and national health service prepared to make the first shots of a two-shot vaccine available to those in the highest risk categories.

Health secretary Matt Hanckock was reported to have said that vaccines will "offer a way out of this pandemic" by Spring 2021, although there was also speculation on Wednesday that more curbs on activity and freedoms could be just around the corner. 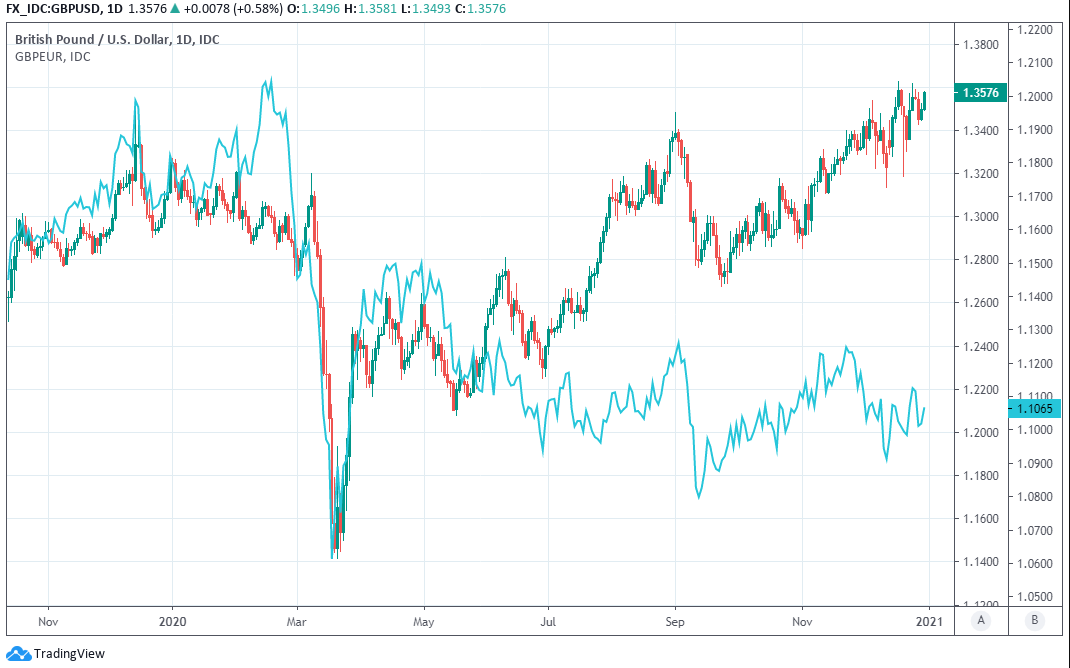 The government has already forced the reclosure of supposedly non-essential businesses in many parts of the country although the health secretary has suggested that even heavier measures could be required due to the new, more infectious variant of the coronavirus spreading in the country. A return to an all-out national 'lockdown' in January would delay the economy's recovery from what is already expected by economists to be a final quarter contraction.

It's not clear if further restrictions could curb appetite for Sterling however, given the degree of existing measures elsewhere and prospect of new curbs also being brought in overseas as more countries discover instances of the mutated virus strain. The mounting threat to the UK and global recoveries comes alongside a fresh holdup in Washington of much-need financial aid for American households, although neither had prevented risk currencies and other assets from rallying Wednesday morning.

"Real economic headwinds are increasing with the surging pandemic weighing on activity. Colorado reported the first US case of the fast-spreading Covid-19 variant first observed in the UK. New restrictions and lockdowns continue to be imposed in parts of the US and Europe," says Jussi Hiljanen, chief strategist for USD and EUR rates at SEB. "Senate Majority Leader Mitch McConnell derailed yesterday efforts to quickly pass an increase in direct stimulus payments from USD 600 to USD 2,000 per adult and per child for those with adjusted gross incomes under USD 75,000, which has been demanded by President Trump but opposed by most Republicans."