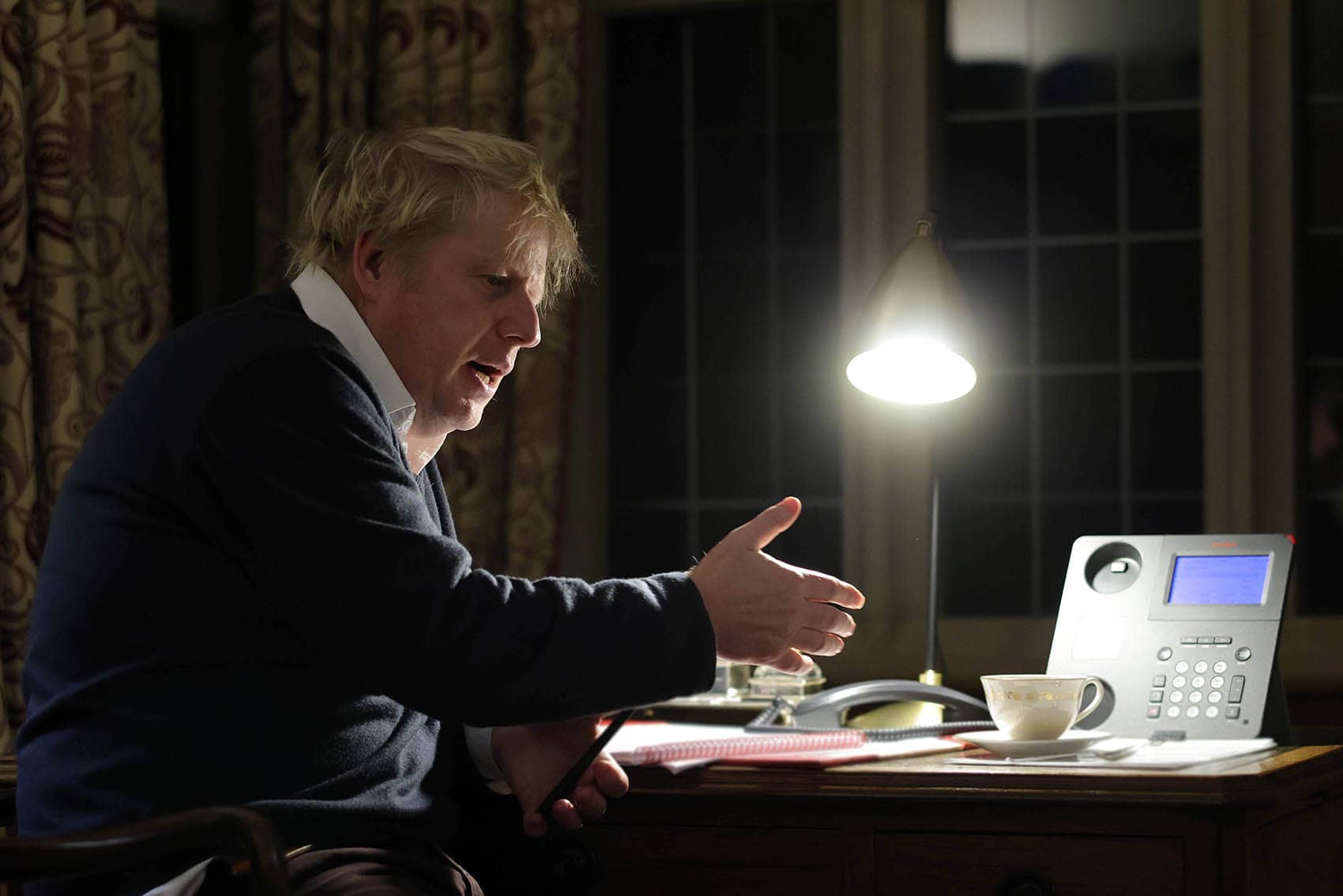 Above: Prime Minister Boris Johnson talks to President of the European Commission Ursula von der Leyen from his office at Chequers during the Brexit talks. Picture by Andrew Parsons / No 10 Downing Street

The British Pound staged a recovery late on Monday on news UK Prime Minister Boris Johnson will travel to Brussels to try and secure a post-Brexit trade deal.

The UK currency started the new week deep in the red on renewed jitters that the UK and EU were fast heading for a 'no deal' outcome to Brexit negotiations, but the lion's share of those losses were ultimately recovered amidst clear signs of an intensification of efforts to strike an accord.

It was announced late on Monday Johnson would travel to Brussels to try and reach agreement with the EU Commission President Ursula von der Leyen, a move that amounted to a clear step-up in tempo.

"We agreed that the conditions for finalising an agreement are not there due to the remaining significant differences on three critical issues: level playing field, governance and fisheries," the leaders said in a statement following a phone conversation.

"We asked our chief negotiators and their teams to prepare an overview of the remaining differences to be discussed in a physical meeting in Brussels in the coming days," they added.

The announcement of a physical meeting was a surprise for markets as it was expected the two would merely try and attempt to make progress over the phone.

The two leaders spoke by phone at 4PM UK time, before Johnson requested the call be paused, presumably to converse with advisors.

It was always expected that a breakthrough to the deadlocked talks would only ever be settled at the political level, and it now appears this is the level at which the intensification of negotiations is taking place.

This is a signal that appears to have assuaged markets, with the Pound recovering from losses that were in excess of 1.0% against both the Euro and Dollar at one stage on Monday. 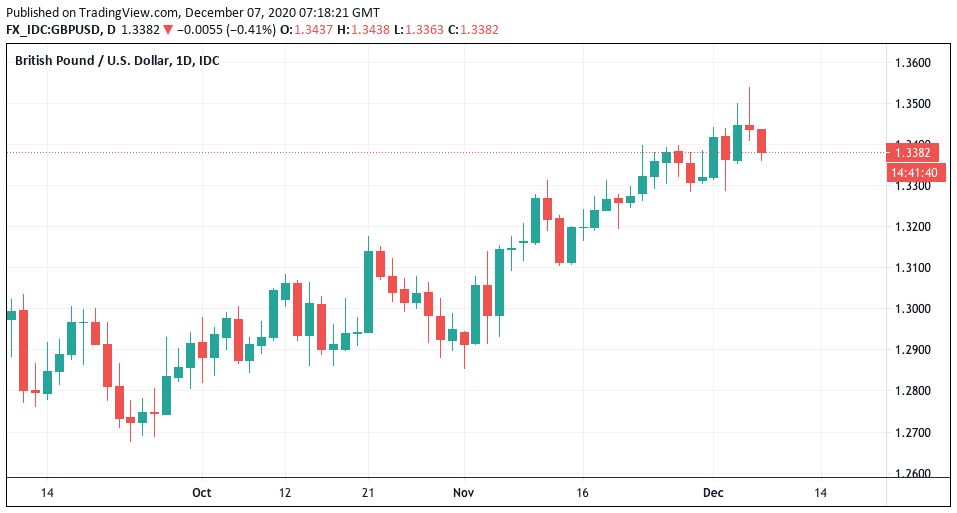 Above: GBP/USD remains in an uptrend, despite heightened nerves over Brexit talks.

The Pound fell at the start of the London trading session on Monday as traders priced in the prospect of a 'no deal' outcome to EU-UK trade negotiations after a UK newspaper reported Johnson was ready to quit talks within hours.

The Sun reported Monday morning that Johnson was ready to walk away from negotiations "within hours" as demands being made by the EU were "outrageous".

"It really is end game stuff now. If by close of play Monday there is no movement there'll at least be a question about whether it is worth carrying on. We're not going to give into EU demands preventing us taking back control of the rules Britons live under. It's that simple," Johnson was quoted as saying.

Volatility in the UK currency is likely to be elevated this week with traders and automated trading algorithms likely to be reactive to rumours, briefings and official updates on the status of post-Brexit trade talks which could yield either a positive breakthrough or end in failure by the weekend.

Media reported that Barnier to be downbeat on the prospects of a deal being achieved.

Talks could now possibly run into Thursday and Friday's European Council meeting, where EU leaders could agree amongst themselves a final offer to make the UK.

"von der Leyen will not call it a day but will signal the possibility of an agreement at the EU summit on Thursday / Friday this week. It would not really make sense anyway that after years of Brexit drama we would not be tortured with it up to the very last minute," says Ulrich Leuchtmann, Head of FX and Commodity Research at Commerzbank.

There is therefore still time remaining within which to reach a deal and as a result foreign exchange traders are not yet willing to sell Sterling aggressively.

"In our view, the fact that a) the two sides are still at the table and b) are not resorting to a high-level blame game suggests that both sides want a deal and believe it can still happen. We continue to see a 75% chance of such an outcome," says Kallum Pickering, an economist with Berenberg Bank.

Delving into some of the rumours being reported in the press on Monday, the Telegraph reports the EU backed down over post-Brexit fishing arrangements on Sunday night – but the chances of a trade deal remained "on a knife edge", with other key issues unresolved.

The 'breakthrough' on fishing was reported by Sky News overnight, but ITV's Politics Editor Robert Peston said a final agreement on fishing had certainly not been achieved.

But, there does appear to be some consensus amongst the journalist community that the issue of 'level playing field' provisions - whereby the UK agrees to follow EU rules on business standards - is proving particularly problematic.

UK sources tell the Telegraph finding agreement on fishing was "the easier part" of closing out a deal because there is some room for compromise on both sides, warning that the issue of "level playing field" guarantees was an "existential threat" to British sovereignty which will only be resolved if Macron and other leaders make a significant shift.

A lot of speculation on Brexit right now, based on "sources" of both sides. It's worth remembering two things: a) the only people who know what's happening are those inside the negotiating room, b) those who usually brief to journalists are political advisors with own interests.

It is reported the EU wants the right to impose "lightning tariffs" on UK goods if it decides Britain has breached the terms of the trade deal by diverging too far from EU rules and standards.

Johnson has reportedly insisted the UK will set its own rules as per the prerogative of an independent state.

"We expect serious background talks within the EU in the next few days to assess whether the UK has already moved enough for the EU to soften its position further as well. For example, if Barnier believes that Johnson is finally meeting the necessary conditions on level playing field and dispute settlement, Merkel may discuss with Macron how to compensate French (as well as Spanish, Belgian and other) fishermen who may lose out if the EU signs up to future fishing quotas in UK waters that the UK government deems acceptable," says Pickering.

The Pound is widely tipped by the foreign exchange analysis community to rally in the event of a deal being reached, although the scope of the rally is hotly debated.

"Like most, we do tend to favour a deal being struck and given the EU leaders’ summit on Thursday – this should be the week for a deal. We suspect a deal would trigger some strong gains through 1.35 and probably drag the European FX complex higher against the dollar," says Chris Turner, Global Head of Markets and Regional Head of Research for UK & CEE at ING Bank N.V.

Also up for debate is the scale of declines in the event of a 'no deal' outcome; while analysts expect the Pound to fall if no deal is reached many put the bottom in GBP/USD and GBP/EUR at levels already seen in 2020.

This suggests the collapse seen in 2016 when the UK unexpectedly voted to leave the EU is unlikely.