The British Pound starts the new week in distinctly mixed fashion by edging lower against the Euro and higher against the U.S. Dollar and a number of other major currencies.

The currency is likely to be trendless over coming hours and days as investors await developments concerning a post-Brexit trade deal, however a lack of a decisive trend does by no means preclude the currency from the potential for wild swings as intraday volatility rises.

This week is held by the EU and UK to be a deadline for the two sides to reach a new deal, with focus falling on Thursday's meeting of EU leaders where a deal could be agreed. Market's will dedicate attention to any news - official or unofficial - concerning talks and trade Sterling accordingly.

Despite a desire to agree a deal this week, media reports over the weekend suggest that given the outstanding issues talks will fail to yield a breakthrough just yet.

"The hope was to reach an agreement ahead of the EU leaders' video conference on 19 November but that seems unlikely. The next two to three weeks are going to be crucial. If we are right about a Brexit deal - and we continue to get more positive vaccine news - we expect EUR/GBP to start moving lower towards 0.86," says Mikael Milhøj, Senior Analyst, at Danske Bank. 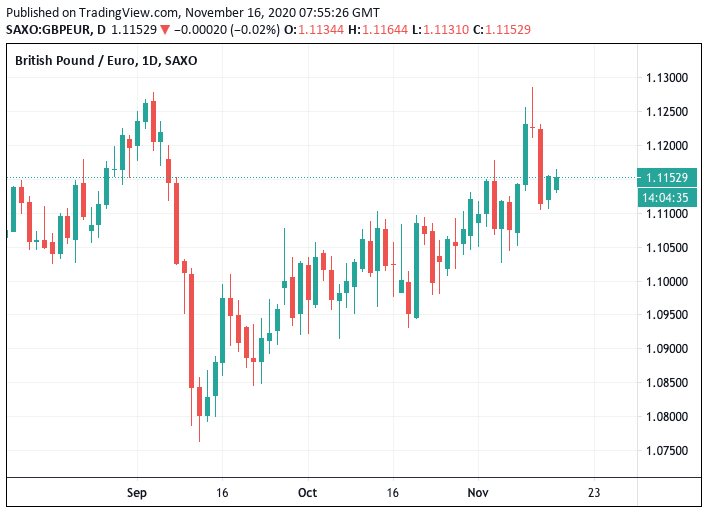 Above: GBP/EUR retreated from two-month highs last week, but still ultimately remains supported. Book your ideal exchange rate automatically when reached in the future, find out how.

EU and UK negotiators will reconvene in Brussels on Monday, however political analysts are saying the two sides will require fresh mandates from their leaders if the deadlock is to be broken.

"We are working to get a deal, but the only one that's possible is one that is compatible with our sovereignty and takes back control of our laws, our trade, and our waters. That has been our consistent position from the start and I will not be changing it," said David Frost, the UK's Chief Brexit Negotiator on his arrival Sunday in Brussels. "There has been some progress in a positive direction in recent days. We also now largely have common draft treaty texts, though significant elements are of course not yet agreed. We will work to build on these and get an overall agreement if we can."

The two sides remain divided over the future access of EU fishing fleets to UK waters and the ability of the UK to diverge from EU standards and subsidy rules.

"The UK’s playbook for trade negotiations is unlikely to change much, if at all. We still expect that the UK and the EU will blow past Sunday’s negotiations deadline to likely extend it to Wednesday but still with only an extremely slim chance that an agreement is reached," says Shaun Osborne, chief FX strategist at Scotiabank. "GBP is at risk of quickly unwinding its latest gains."

With time running down and an apparent deadlock on the remaining issues, Frost warns that a 'no deal' outcome is still possible.

"But we may not succeed. Either way, as the Prime Minister Boris Johnson made clear on 16 October, people and businesses must prepare for the change that is coming on 31 December, most of which happens whether there is a deal or not," said Frost.

A failure to reach an agreement would set the wheels in motion for the UK and EU to start trading on WTO terms in 2021, meaning a barrage of trade barriers would have to be raised between the two blocs. The EU would also lose access to UK fishing waters, while bilateral agreements on security cooperation and other areas of importance will also cease.

The implications for Sterling are stark, and foreign exchange analysts expect a sharp downward adjustment in the event of a failure by the two sides to reach a deal.

"The two sides are... still oceans apart on fish and, I’m told, making very little progress. The so-called level playing field on trade rules and standards remains contentious," says James Forsyth, political editor of The Spectator, in his weekly column for The Times.

EU leaders will meet on November 19 for a scheduled European Council summit, which will take place virtually owing to the covid-19 pandemic. It had been hoped that enough progress in talks would have been made to allow leaders to sign off on a deal, however media reports suggest leaders will have to concede to further negotiations.

The two sides would still have a European Council meeting scheduled for 10-11 December at which either a deal could be endorsed or the Brexit transition extended beyond December 31, although failure to produce one this week could see confidence in Sterling tested.

"The EU views this as a crucial moment given that the European parliament needs time to ratify the deal. Perhaps more time can be put on the clock somehow. But things will undoubtedly become more complicated if there isn’t an agreement by the end of (this) week," adds Forsyth. 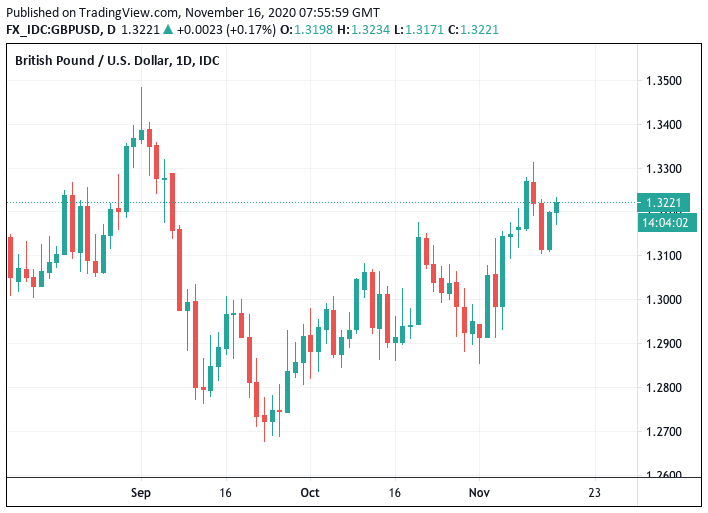 Above: GBP/USD reached a two-month high last week before retreating. Lock in current rates for use over coming months if you wish to protect your payments budget, learn how.

The 'complications' referred to in the above would likely lead to rising anxieties concerning the Pound and it could trend lower in an atmosphere of rising political tensions.

There were expectations that the departure last week of the chief advisor to Boris Johnson, Dominic Cummings, would lead to a potential softening in the UK's stance that would ultimately shoo in a deal.

However, a report out on Sunday confirms that it is Johnson who remains the "hardest in the room" in his unwillingness to budge to secure a Brexit deal, suggesting talks will indeed run until the very end.

For now, the Pound is however displaying a market that is ultimately still somewhat expectant of a deal being achieved, the currency starts the new week slightly softer against the majority of its peers, but is nevertheless at levels consistent with a multi-week uptrend sequence. The Pound-to-Euro exchange rate is at 1.1146, having been as low as 1.0762 in September. The Pound-to-Dollar exchange rate is at 1.3211, having been been as low as 1.2626 on September 23.

Despite ever-present anxieties, the Pound does appear to be holding ground.

"While time for a deal is definitely running out, the way the Pound trades suggests some people are hoping a deal can be struck," says Kit Juckes, Global Head of FX Strategy at Société Générale. "Maybe some bears are throwing in the towel."

Juckes says he will be surprised if GBP/USD is anywhere near current levels by the end of this week, "but is it going to 1.25 or 1.35?" he ponders.

Credit Suisse's Jonathan Pierce says he has initiated a 'short' trade (a sell) on the EUR/GBP exchange rate in anticipation of a bounce in Sterling, with a stop-loss set at 0.9020 in the event that this bet on Sterling gains goes wrong.

Looking at this from the other angle, this is a buy on GBP/EUR with a stop-loss target set at 1.1086.

"The pace of negotiations seems to have slowed right down now we are at the major sticking points, maybe we need to have both sides more inline on when the deadline is to build the will for that final agreement (maybe from political leaders) to occur – the problem is that the Europeans need more time to ratify the deal so views are currently somewhat misaligned. Cable on a 1.30 handle would represent good value as we still believe the deal will be done but that if it is the topside will indeed be relatively limited," says a note from the foreign exchange dealing desk at JP Morgan in London.