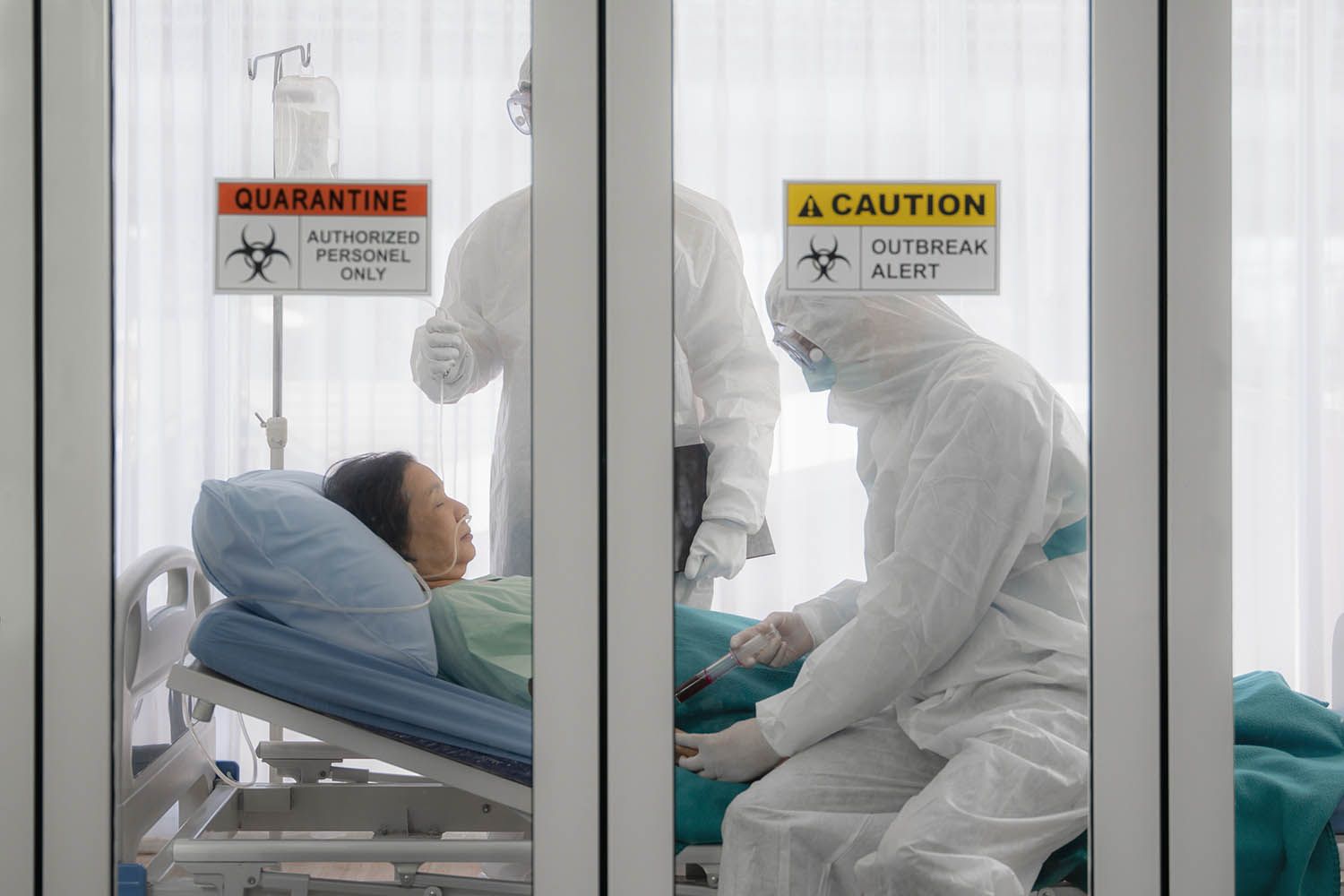 Fresh headlines concerning a covid-19 vaccine have underpinned a global market recovery that is taking stocks, commodities and risk sensitive currencies such as the British Pound higher.

ITV News reports that there will be positive news soon "perhaps tomorrow" on initial trials of the Oxford Covid-19 vaccine that is backed by AstraZeneca and supported by tens of millions of pounds of government money.

The first data is due be published in the Lancet.

According to ITV Polticial Editor Robert Peston, "apparently the vaccine is generating the kind of antibody and T-cell (killer cell) response that the researchers would hope to see."

A source told Peston: "An important point to keep in mind is that there are two dimensions to the immune response: antibodies and T-cells. Everybody is focussed on antibodies but there is a growing body of evidence suggesting that the T-cells response is important in the defence against coronavirus.

Not all of the many vaccines under development across the world increase both antibodies and T-cells, but according to the report the Oxford vaccine looks as though it has this twin effect.

The news comes after biotech firm Moderna reported in the New England Journal of Medicine that trials of their vaccine produced antibodies in all 45 of the patients in an early stage trial.

The developments have fuelled a recovery in global markets which are aiding risk sensitive currencies, such as Sterling, higher.

The recovery in stock markets in the mid-week session has predictably allowed Sterling to recover some lost ground with markets going higher following overnight headlines of progress being made on a covid-19 vaccine. "A high-ranking anonymous U.S. government official said yesterday that it is expected that a vaccine production will be able to start before the end of the summer. In addition, the news came late yesterday that the pharmaceutical company Moderna’s Covid-19 vaccine has succeeded in producing significant levels of antibodies in all tested patients," says Olle Holmgren, an analyst at SEB.

Stocks are higher in midweek trade owing to the headlines, but while Sterling is off its lows it remains notably lower than where it started the week.

For much of 2020 - particularly since the coronacrisis market meltdown of March - the GBP/EUR exchange rate has maintained a correlation with the S&P 500 which is the U.S. index widely held to be the representative benchmark of global investor sentiment. In the below we can trace a similar pattern in the ups and downs in the S&P 500 (orange) and the GBP/EUR (blue). In particular we can see that this week's decline in GBP/EUR matches the decline in the S&P 500, and we therefore maintain a view that the Pound is highly sensitive to a sell-off in stock markets. 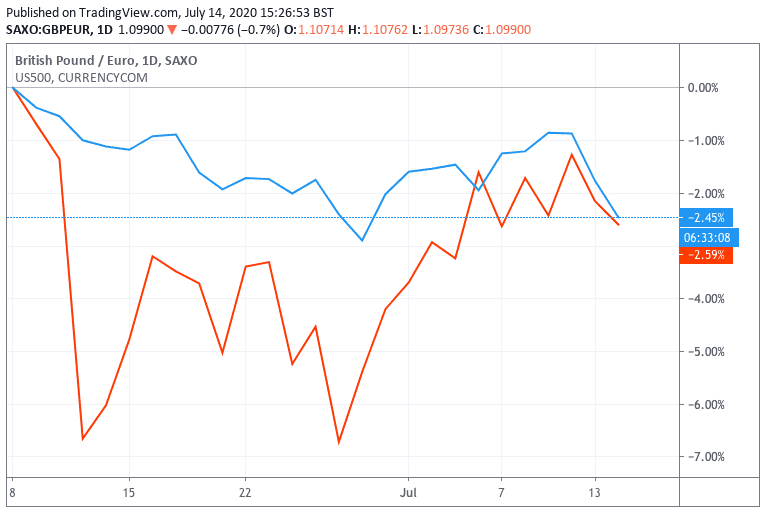 "The GBP will remain the FX market's top "*RORO currency" for the time being. Put differently, it's very difficult to judge which way global risk assets are going to lurch next, and the GBP's positive relationship with those variables is still reasonably strong," says Stephen Gallo, European Head of FX Strategy at BMO Capital. *RORO means risk-on, risk-off and refers to the moves higher and lower in stock markets according to whether investors are confident enough to buy (take on risk) or sell (take risk off the table).

Of particular concern for those looking to sell pounds to buy dollars and euros is research that shows the UK currency to be more reactive to bouts of stock market declines than it is to stock market recoveries, meaning it will readily fall when markets fall but will be stubborn to recover when markets are rising.

This observation is critical in understanding why the Pound fell sharply in the first two days of the week but has only enjoyed a tepid recovery on Wednesday.

Investors turned shy earlier in the week after the U.S. rejected a number of Beijing's contested maritime claims in the South China Sea and indicated that the White House could soon turn its attention to Chinese companies listed on American stock markets in a bigger way, further souring and already darkening mood.

Stock markets and risk currencies have wobbled since Monday evening when California, the most populous U.S. state and the world's 5th largest economy, reimposed a number of 'lockdown' restrictions in an effort to contain a resurgent coronavirus, lending stability to a Dollar that has come under increasing pressure in recent weeks.

"The tug of war between 'risk on' and 'risk off' market sentiment continues and risk aversion is starting to gain traction again amid intensifying fears of a second wave of coronavirus infections sending economies back into lockdown," says Vessey.

If we look at the GBP/USD exchange rate we will notice the correlation between markets and the Pound to be intact here too, confirming that the global equity market picture certainly has the ability to wag Sterling: 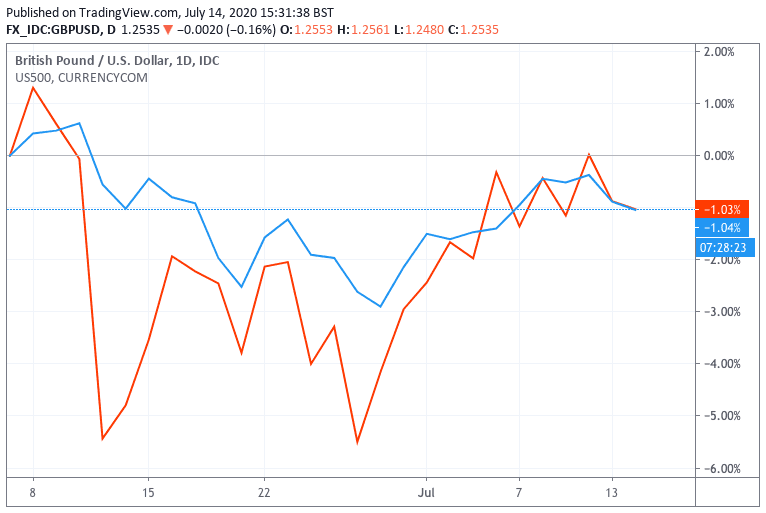 "Currencies are still playing to the tune that has dominated over the past few weeks, i.e. a continued struggle between global risk aversion and global risk appetite. The latter prevails in the end over risk-off sentiment, but this is not a straight road. Concerns about the COVID-19 pandemic – new cases are steadily rising in the US; Melbourne has just announced another six-week lockdown – are still preventing risk-on sentiment from spreading much more across markets and currencies," says Roberto Mialich, FX Strategist at UniCredit Bank in Milan.

The Pound is certainly an unloved currency at present with data showing it to be the worst performer in the one-month and one-week timeframes, suggesting that there is likely to be a degree of idiosyncratic weakness playing out that extends beyond global investor sentiment.

One source of this weakness is likely to be concerns for the UK economy, whose slow recovery from the covid-19 crisis could invite the Bank of England to cut interest rates to 0% and even below over coming months.

UK GDP rose just 1.8% in May, confounding markets which were looking for a more robust reading of 5.5% and confirming the UK to likely suffer one of the deepest and most persistent economic declines amongst its developed world peers.

"UK May GDP data (+1.8%) were very soft relative to expectations of a 5%-plus rebound after April's 20.4% collapse. Sterling has felt that softness though June BRC data were better, and May was, it feels now, a long time ago. EUR/GBP is back above 0.90, where I think it belongs," says Kit Juckes, Global Head of FX Strategy at Société Générale.

"May's disappointing GDP is also a blow for hawks opposed to an increase in the Bank of England's quantitative easing programme, and it keeps the option of negative BoE interest rates on the table," says Robert Howard, a Reuters market analyst.

The other idiosyncratic concern for Sterling is of course Brexit trade talks which continue today in Brussels.

Talks are deadlocked according to officials but we have noted some press releases and reports over recent days that have suggested the building blocks for an agreement were falling in place. However, with October being touted as the deadline we would not expect any breakthroughs to be forthcoming this week.

"GBP/USD could rise 4% if a deal is agreed but fall over 10% if not and resulting in the UK defaulting onto World Trade Organisation terms. The $1.14 level could come back into play, and new 35-year lows may even print," says Vessey.

With no Brexit breakthrough likely we would imagine the foreign exchange market will continue to pay close attention to stock markets and Bank of England policy expectations, and for Sterling these are currently extremely unhelpful. 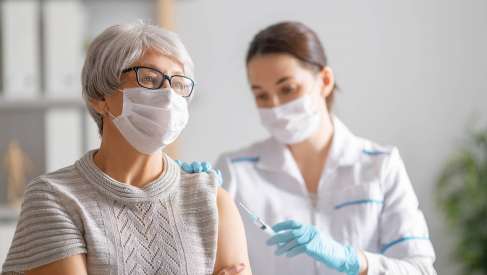