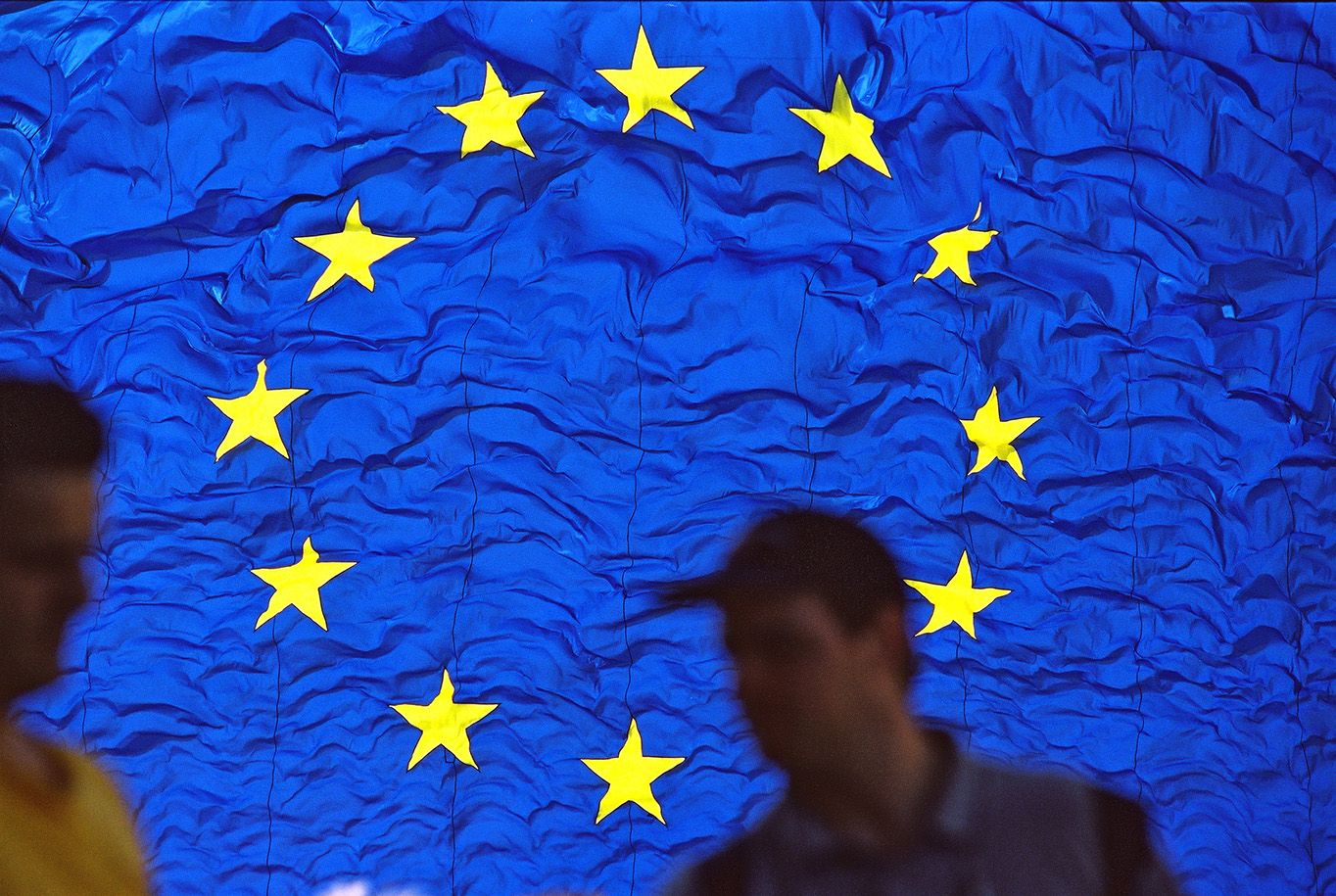 First, on the matter of the data, the Pound recovered some earlier losses on the back of stronger-than-expected CPI figures from the ONS that showed prices in the UK rose 1.8% in the year to January 2020.

This is greater than the 1.6% expected by markets and represents a pick-up in price increases from December where 1.3% is recorded.

Crucially, this rise puts inflation a great deal closer to the Bank of England's target rate of 2.0% and will almost certainly go some way in cooling expectations that the next move at the Bank of England will be to cut interest rates. The rule of thumb in FX markets is that when expectations for a rate cut at a central bank decrease, the currency that central bank issues rises.

This is the currently the case with Sterling, and we can see a notable 'gap' higher in the Pound-to-Euro exchange rate following the release of the data: 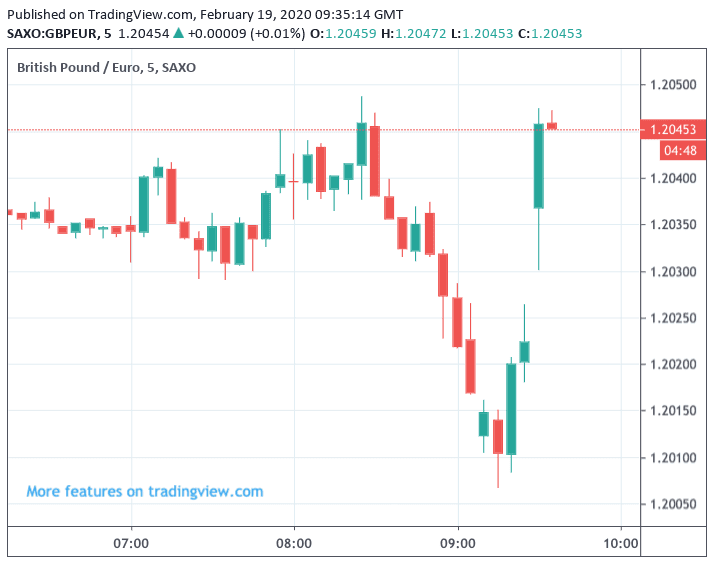 "The ongoing trend of encouraging UK economic data may well continue to strengthen the GBP over the coming days. Confidence in the currency appears to be gradually returning," says Marc-André Fongern, Head of Research at MAF Global Forex.

The stronger-than-expected inflation data dovetails with Tuesday's release of stronger-than-expected labour market statistics, which both serve to create the impression of an economy that remains robust. This makes for a stark contrast with the Eurozone in particular, where the data is headed in the opposite direction.

According to the ONS, the lift to prices in the UK came primarily from increases in gas and electricity prices, fuels and lubricants, clothing and airfares. 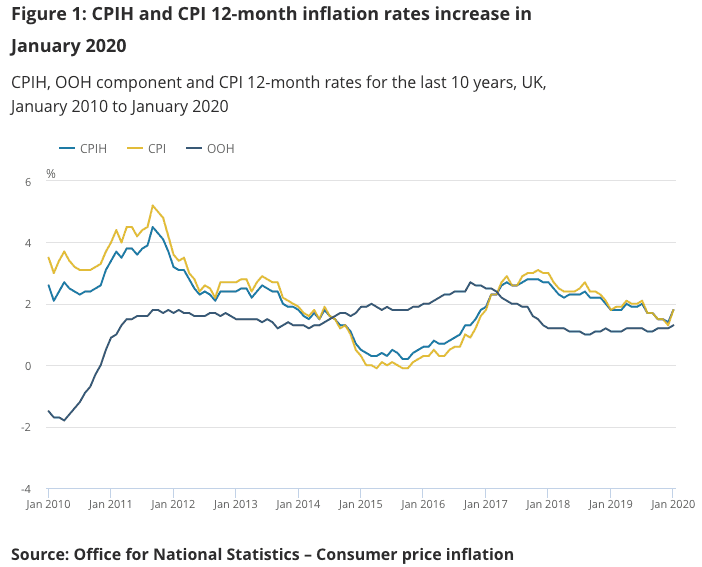 "For the MPC, the fact that inflation is evolving in line with its projections provides another reason not to cut interest rates in the near term," says Ruth Gregory, Senior UK Economist at Capital Economics.

However, Capital Economics are expecting price pressures to ease in the foreseeable future, noting that the most recent fall in fuel prices should subtract 0.1ppts from CPI inflation in February.

In addition, Gregory notes price pressures at the start of the pipeline are still very weak, with output price inflation remaining close to 1% in January. As a result, CPI inflation still looks likely to slip back to 1.5% within the next few months and remain below 2% for the rest of the year.

However, from a Sterling perspective, the momentum in the data remains supportive and could provide support for the currency as headwinds from EU-UK trade negotiations increase in strength.

"Looking at the wider economic outlook for the UK, a recent uptick in employment, PMI surveys and house prices serve to highlight the gradual return to confidence evident within the UK at the moment. With the latest retail sales and PMI surveys due later this week, the Sterling rebound is likely to persist as economic data continues to bloom after a tough end to 2019," says Joshua Mahony, Senior Market Analyst at IG.

Ahead of the release of inflation data, the British Pound was in fact trending lower as markets reacted to an uptick in newsflow concerning the latest developments between London and Brussels ahead of the commencement of what are almost certainly going to be fractious trade negotiations.

Markets are watching reports coming in from journalists in Brussels - these reports are inevitably first broken by newswires or Twitter - and are noting the two sides are moving further apart in their positions on the shape of a future trade deal.

Interestingly, there is a slideshow battle underway, with the UK Prime Minister's office tweeting the following slide that was last year presented by Michel Barnier, the EU's Chief Negotiator: 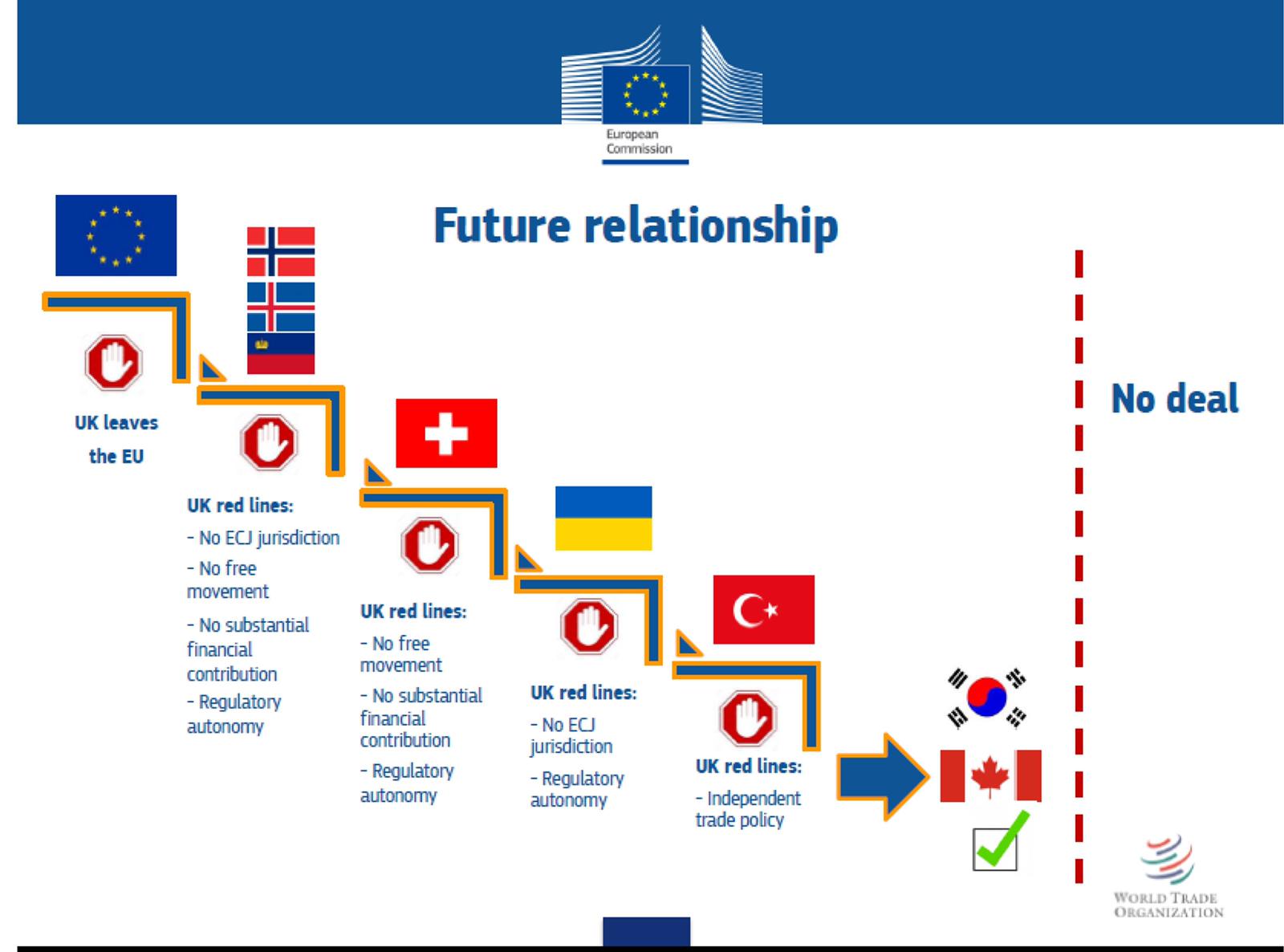 In a somewhat provocative manner, the Prime Minister's office media team ask: "In 2017 the EU showed on their own slide that a Canada type FTA was the only available relationship for the UK. Now they say it’s not on offer after all. Michel Barnier, what’s changed?"

"EU officials are privately aggrieved at the No 10 tweet which turns Barnier's famous staircase slide against him," says Nick Gutteridge a reporter at The Sun.

At the heart of the message here is the UK apparently questioning why the EU are intent on placing stringent terms on the UK as the price for a free trade deal, when the very deal they are seeking came with no such strings attached when granted to Canada.

The EU want the UK to sign up to a swathe of regulations, which must be adhered to even as the EU's laws change, in order for the UK to have a free-trade deal.

The EU's negotiating team has meanwhile created a new slide that makes the argument as to why the UK should not expect the same treatment as Canada. 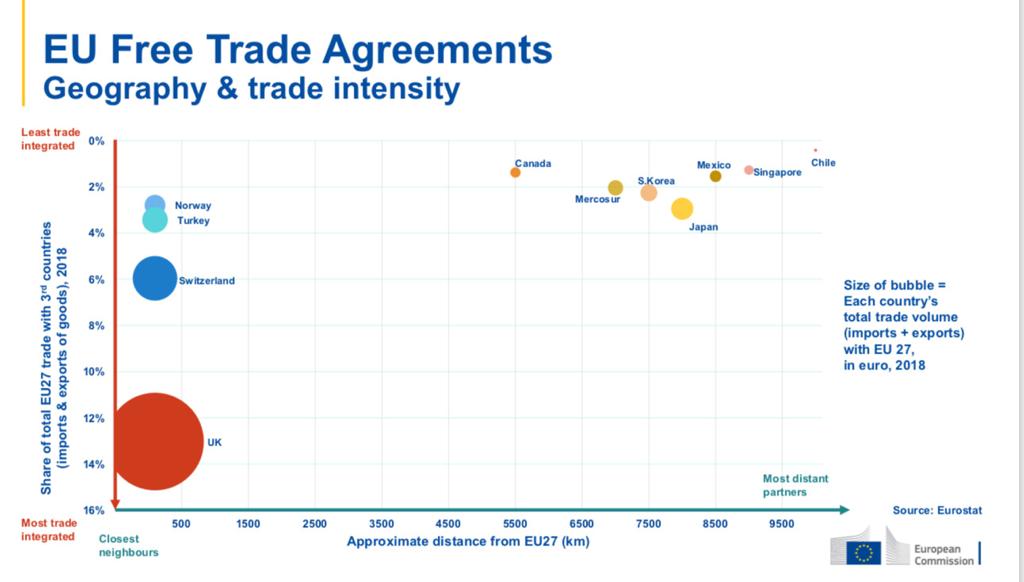 "It shows the value of trade to distance ratio of the EU's trade with the UK compared to countries it currently has FTAs with," says Guttridge.

The EU's argument is that the UK must be bound by strict EU regulations simply because of its proximity and its history of being more closely entwined in the single market.

Some might argue that these factors would work in favour of the UK's position, but it is nevertheless the single most important justification the EU appear willing to argue in coming negotiations.

The tenor of discussions are growing more acrimonious and hardly sets the best platform for constructive talks, which is on balance a significant potential negative for Sterling going forward.

"The two sides are moving in opposite directions apace," says Guttridge.

The Financial Times on Wednesday reports that EU nations are looking to tighten the screws on the UK further, "preparing to toughen the conditions they will attach to any tariff-free trade deal with the UK, reinforcing demands from Brussels on regulatory alignment and access to fishing waters that Britain has already rejected."

The latest version of the EU’s negotiating mandate, seen by the Financial Times, responds to concerns raised by France and others that the European Commission’s original draft, presented earlier this month, did not go far enough in requiring Britain to stick closely to the EU’s level of regulation, even as the EU's rules change over time.

The new draft highlights the growing rift between the two sides and will likely add further questions  different negotiating positions ahead of the start of talks in March, which follow the UK’s formal exit from the bloc at the end of January.

"Given the renewed uncertainty, the UK currency is likely to depreciate in 2020," says Jacques Keller, Global Bonds Portfolio Manager at Amundi Asset Management. "The UK and the EU starting positions on any FTA agreement are far apart and the likelihood of negative news flows on the state of negotiations is high during the year. Overall, the GBP will likely be weighed down by all of these factors."