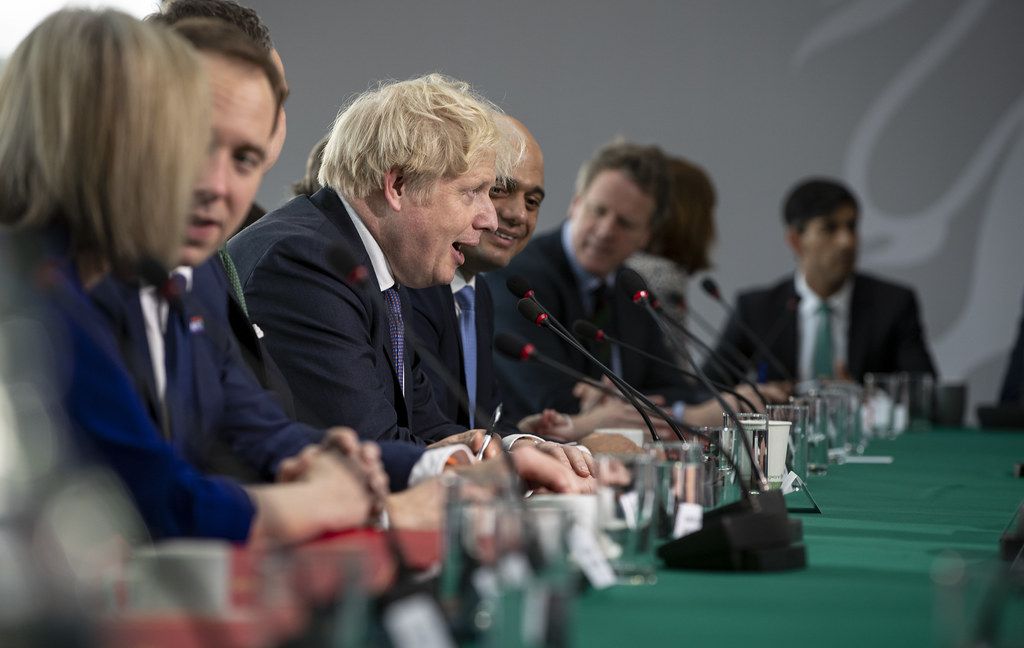 The British Pound was seen to be advancing on its global peers on Thursday, February 13 amidst a broad-based sell-off in global stock markets amidst a resurgence in fears over the coronavirus and a notable shakeup to the UK's finance ministry that could influence the scale of the country's looming fiscal expansion.

Domestic focus falls on a reshuffle of Prime Minister Boris Johnson's cabinet that has thrown up some surprising developments with the removal of Julian Smith as Northern Ireland Secretary and Geoffrey Cox as Attorney General.

However, the most potentially notable development is news that Chancellor of the Exchequer Sajid Javid has resigned and has been replaced by rising star Rishi Sunak. While Sunak is surely a competent replacement he is still a relative newcomer to the Cabinet, suggesting the Prime Minister will have a more malleable Chancellor when it comes to enacting his vision on spending and taxation.

Markets are sniffing a larger-than-expected boost to spending as a result of the moves.

"The fiscal floodgates are about to open – whatever brake the Treasury might have had on Number 10 has been cut entirely with this move," says Neil Wilson, Chief Market Analyst for Markets.com. "Sterling dipped initially as chancellor Sajid Javid resigned, after he refused to fire all his special advisers. The move knocked GBP/USD lower but cable ripped higher as Rishi Sunak, the chief secretary to the Treasury, was appointed in his place. GBPUSD has moved through 1.30 and cemented gains on the way to 1.30240. The pound seems to like this reshuffle."

The market has reacted by sending UK gilty yields higher, which has in turn pulled the Pound up. This is a classic signal that the market sees more spending ahead. 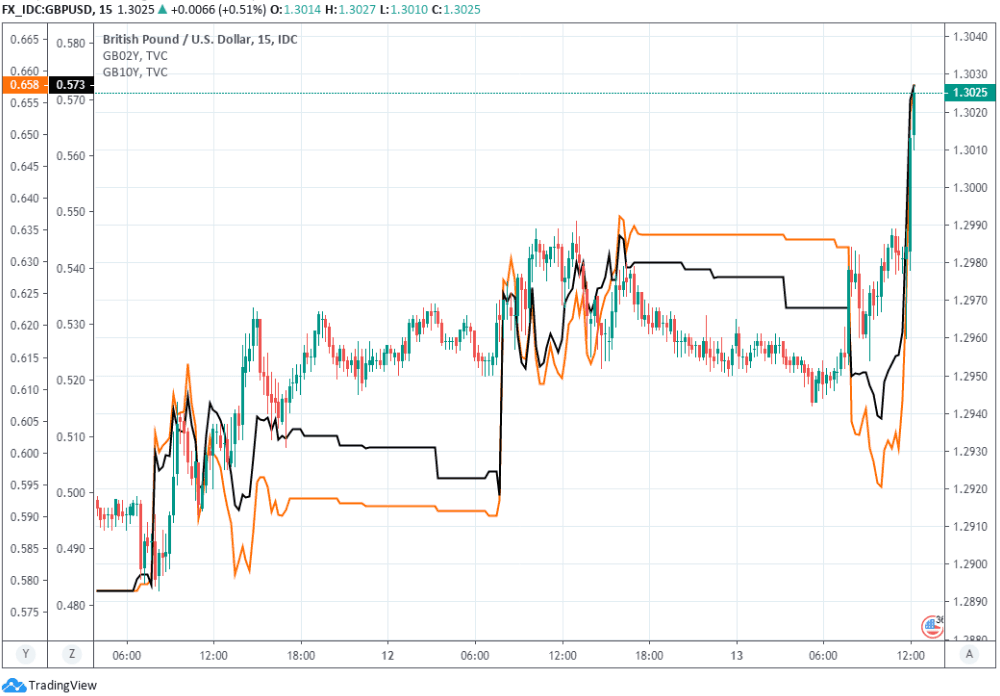 Above: the yield paid on UK government debt (orange and black lines) and the Pound have both risen today.

We have been reporting that increased government spending could prove to be a major source of support for Sterling in the first half of 2020 as it could provide a base for the economy heading into EU-UK trade negotiations.

The implications for Sterling will however only become clear when the reasons for the announcement become clear. Did Javid resign over disagreements on the scale of the fiscal boost? There is a chance Johnson wants greater expenditure while Javid advocates for respecting fiscal rules that would limit borrowing. This is speculation, but we would suggest that if Johnson is looking for a new Chancellor to furnish a greater-than-expected spending boost, it would be on balance positive for Sterling.

However, Johnson's reshuffle will also have a bearing on the shape of upcoming EU-UK trade negotiations.

Johnson's decisive victory in the December General Election will allow him some leeway in refreshing his top team ahead of looming trade talks with the EU and from a foreign exchange perspective the composition of the Cabinet could have a direct bearing on trade negotiations twhich which are widely tipped to be a key driver of Sterling valuation in 2020.

"UK PM Boris Johnson is expected to carry out reshuffle of his cabinet. The composition of ministers could better determine how the UK-EU trade talks unfold this year, and therefore GBP may be sensitive to these developments," says George Vessey, Currency Strategist at Western Union. "Radical changes are not widely expected but as history suggests anything can happen in the political sphere of Downing Street and GBP traders will be watching closely. Sterling looks poised to test $1.30 against the U.S. Dollar and possibly stretch towards €1.20 against the Euro."

The Prime Minister often looks to Cabinet to deliver key decisions, one only has to look at this week's decision to go ahead with the controversial HS2 rail project which was ultimately settled at Tuesday's Cabinet meeting.

With regards to trade negotiations, the composition of the Cabinet could well influence the ultimate stance the UK adopts, with the rule-of-thumb being that a Cabinet of 'Brexiteers' would be more likely to maintain a tough and potentially uncompromising stance in negotiations.

Under such an outcome, a less market friendly outcome from Sterling's perspective might be arrived at by year-end.

However, the addition of 'remainers' to the Cabinet could soften the stance of the UK, leading to the potential for the UK to accept EU demands in order to keep trade as free as possible.

Indeed, the Telegraph reports that several 'remainers' are to be promoted at the expense of 'leavers'. 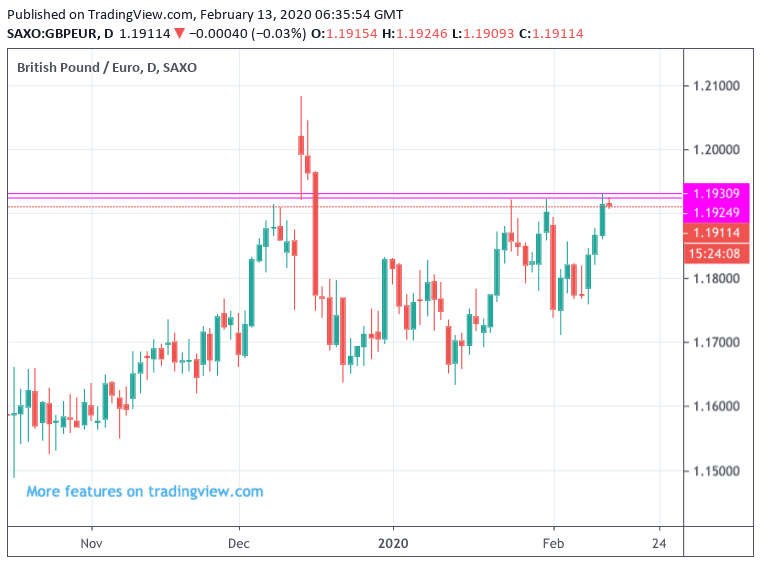 Above: GBP/EUR has recovered but is now facing a notable resistance area that it typically struggles to advance beyond.

We are however wary of placing too much emphasis today's decision will have on negotiations as the entire crop of Conservative MPs have signed up to fully backing Brexit and the potential for serious division, as suffered by Johnson's predecessor Theresa May, is greatly reduced. There are simply are no longer any serious 'remain' sympathising senior politicians in the Conservative Party who would likely push back against the Prime Minister's agenda.

While Sterling has found its feet again of late, we would expect gains to be relatively contained, with market's likely to opt for a wait-and-see approach to EU-UK trade negotiations.

Negotiations on the future relationship between the UK and the EU are due to start in the first week of March, but we would only expect real developments that will give a good insight into the direction of travel to emerge towards the end of the year.

"We expect that politics could be the dominating influence for both broad confidence levels and the Pound over the coming months ... reports that the EU will reject a demand from the UK to guarantee banks access to EU markets is likely to GBP investors wary," says Jane Foley, FX Strategist at Rabobank.

Headlines out this week concerning the UK's all-important financial services sector have served up a reminder of the potential negative impact Brexit could likely have on one the UK's prime foreign exchange earning sectors.

Chancellor of the Exchequer Sajid Javid said the EU should sign up to a "permanent equivalence" regime for financial services that will last for "decades to come" to ensure the UK's financial services sector can maintain access to the European market after Brexit.

However, the EU's Chief Negotiator was swift to hit back against the proposals saying in a speech:

"I’d like to take this opportunity to make it clear to certain people in the United Kingdom authority that they should not kid themselves about this. There will not be general open-ended ongoing equivalence in financial services, nor other management or financial agreements with the United Kingdom.

Barnier added the EU will keep control of tools determining financial service regulations and interestingly said they would maintain a "free-hand to take our own decision." In short, the EU see the UK as a rule-taker with no option for influence coming from the opposite direction.

"The end of the transition period on 31st December has become the new key deadline, and that markets remain worried about the consequences for the UK economy of leaving the EU on so-called WTO terms," says Jonas Goltermann, Senior Markets Economist at Capital Economics. "The year ahead is likely to be another bumpy one for the Pound."