Pound Sterling was bid higher on Tuesday, Feb. 11 on the back of new data from the ONS that showed the UK economy grew in December, while quarterly data showed the economy stagnated at 0% in the final quarter of 2019.

UK GDP grew 0.3% in December, but this was ahead of expectations for growth of 0.2% to be recorded.

Currencies tend to react to data that beats or disappoints against expectations and the movement in Sterling on the GDP release is testament to this.

The Pound-to-Euro exchange rate briefly shot higher to 1.1857 after it as also revealed that year-on-year growth stood at 1.1% in the fourth quarter, better than the 0.8% markets had been expecting. 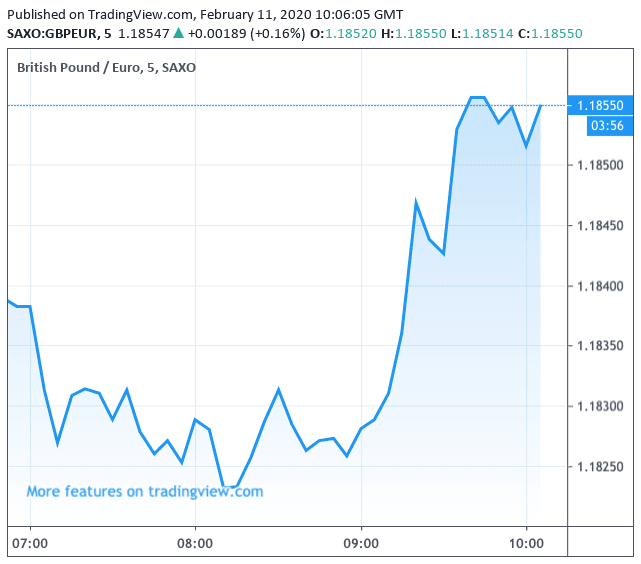 However, the gains in Sterling, which also saw the Pound-to-Dollar exchange rate shoot higher to 1.2943, are by no means significant.

This is understandable as today's GDP data is backward looking in nature and does not reasonably capture the sharp improvement in sentiment that was triggered by the December General Election result.

Markets will be looking to the March release of monthly GDP which would cover the January period and provide official confirmation as to whether the boost in activity reported by a slew of business surveys is in fact being translated into material economic growth.

If the official data does confirm the business survey findings then we would expect markets to pare back expectations for an interest rate cut at the Bank of England in coming months, which would on balance be supportive of Sterling.

"While the first estimate of Q4 GDP showed that the economy stagnated at the end of last year, Q4 will probably prove to be the low point. The pickup in the surveys of activity and sentiment suggest Q1 will be much better," says Ruth Gregory, Senior UK Economist at Capital Economics. 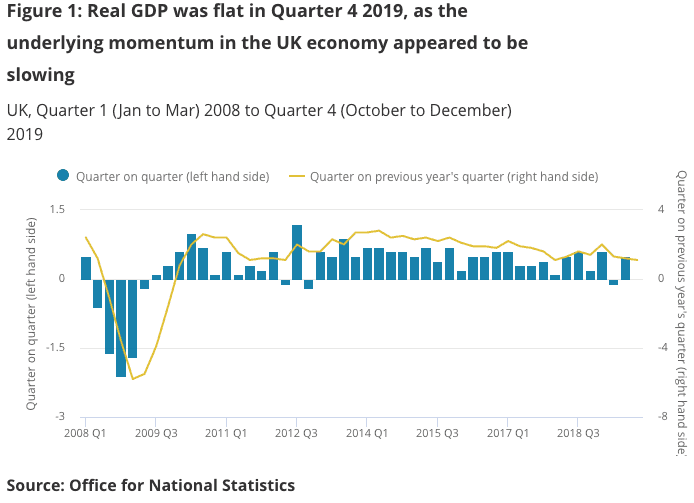 "December saw a stronger than expected 0.3% bounce in GDP, recovering the ground lost in November. In the fourth quarter as a whole, this was enough to keep output flat, although the underlying trend was still for a loss of momentum in the autumn after a stronger performance in the summer. We would expect a revival in growth in the first quarter of 2020 based on improved business and consumer confidence and a stronger housing market," says PwC chief economist John Hawksworth.

Helped by the stronger than expected growth in December, PwC forecast GDP growth to rise to around 0.3-0.4% in the first quarter of 2020.

"UK growth could pick up further later in the year if the global economy stabilises and progress is made on a trade deal with the EU, while the Budget provides a further boost to the economy through increased public investment. But there are still many uncertainties out there relating to Brexit, the coronavirus and global trade, so we would expect the Bank of England to keep their options open on interest rates until a clearer picture emerges," says Hawksworth.

The ONS also report that business investment in the UK fell by 1% in December, meaning the UK's dire run of investment continues.

Key to the economy's outlook is whether investment picks up in the wake of the General Election and the passing of the Brexit deal.

As can be seen in the below, the UK has lagged its major rivals significantly since the Brexit referendum of 2016, understandably so as businesses put investment plans on ice as they await guidance on what the future holds. 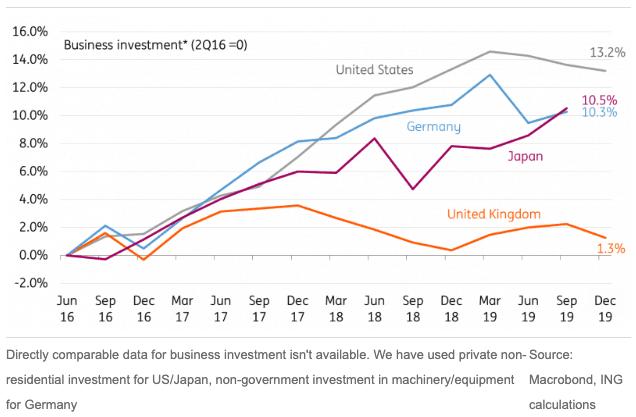 "We remain sceptical that investment will see a dramatic revival. Whether a free-trade agreement is signed this year or not, there's likely to be a wave of new friction for traders at the start of 2021," says James Smith
Developed Markets Economist at ING Bank. "While it is uncertain how firms will react to this step-change, it is unlikely to translate into longer-term investment."

Onshoring of production - i.e. the relocation of production to the UK to avoid tariffs - is likely to be viewed as more of a cost for firms according to Smith, and will ultimately draw resources away from other potential projects.

ING say UK economic growth is unlikely "to speed up dramatically this year", but the Bank of England won't yet be prepared to cut interest rates.

"Barring a more material deterioration, we think policymakers will remain reluctant to cut interest rates. We currently forecast rates on hold through the rest of 2020," says Smith.

Looking ahead to March's release of GDP data for January, economists are expecting a pickup in sentiment that would suggest a corner has been turned.

The composite PMI - which covers the services and manufacturing sectors in the economy - for January rose to 53.2 (the highest since September 2018 and up from 49.3 in December).

In addition, the Deloitte Q4 2019 CFO survey showed a surge in confidence to the highest in the survey’s history.

The CBI quarterly industrial trends survey also reported the highest level of optimism since the second quarter of 2014.

"While the risk of a disorderly Brexit at the end of the year will remain a worry for markets, households and businesses, the election has tilted the balance of factors that will determine the medium-term path of GDP to the upside," says Kallum Pickering, UK Economist at Berenberg Bank.

A further improvement in growth will however rely somewhat on the global economy recovering from the coronavirus outbreak, which has severely impacted Chinese economic output.

A pickup in global trade and activity would aid the UK's under-pressure manufacturing sector which remains resolutely in contraction territory, in sympathy with global manufacturing in general.

The UK is heavily tilted towards consumer spending and Pickering says stronger household confidence can underpin a pick-up in real consumption growth, supported by solid real wage gains (+1.5% yoy for 2020) and healthy balance sheets (net-wealth is at a record high).

Also look out for the scale of spending pledges coming out of the March budget, a substantive increase in spending could well underpin economic growth going forward.

"Johnson has already legislated for the fastest growth in day-to-day government spending in 15 years. Expect a major step up in investment spending at the upcoming budget on 11 March. Fiscal stimulus could contribute 0.7ppt to headline GDP growth in 2020 and c0.3ppt in 2021," says Pickering.