- Expect Pound to be supported

- Others analysts not surprised by weakness, see more downside ahead

The British Pound has been regaining its composure following a sharp slide at the start of the week, with the currency ticking back above 1.18 against the Euro and holding the support zone of 1.30 against the Dollar.

Gains in Sterling have gone some way in overturning the 1.0%+ losses witnessed Monday, which analysts put down to a combination of positioning adjustments following the rebalancing act that often characterises markets at month-end and fears that looming trade negotiations between the EU and UK will prove difficult.

While market uncertainty over the course of trade negotiations in 2020 will cap the Pound's potential and ultimately keep it's rallies short-lived, there remain some analysts in the market who say the sharp sell-off seen on Monday was overdone and the Pound was therefore a potential candidate for a rebound.

"I consider the UK Pound's recent depreciation to be largely exaggerated and unjustified. Johnson's rather level-headed approach is as encouraging as the Bank of England's current monetary policy stance. In addition, the UK economy appears to be on the road to recovery," says Marc-André Fongern, Head of FX Research at MAF Global Forex. 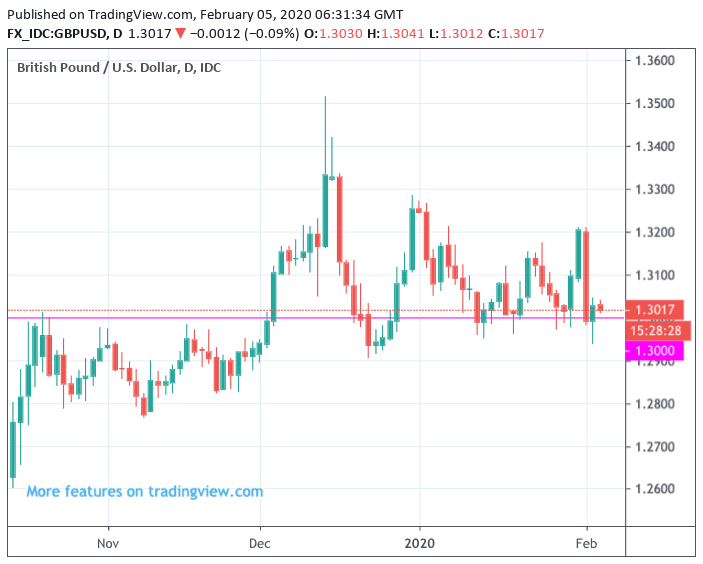 Above: The 1.30 level in GBP/USD (purple line) is a notable level of support, having been a resistance level in the October-December 2019 period.

The Pound's declines came amidst headlines over the weekend that Prime Minister Boris Johnson would settle for an Australia-style deal if he was unable to secure a free-trade deal in the form of Canada's current deal with the EU, which guarantees that up to 98% of goods traded are not subject to tariffs.

Why is the distinction important? Primarily because the deal Australia has with the EU is relatively poor, so poor in fact that the two sides in 2018 committed to another round of negotiations in an attempt to break down barriers.

In short, some elements of the market and analyst community interpret an Australia-style deal is code for a bare-bones deal as stipulated by the terms of the World Trade Organization. And of course, a WTO deal was during the course of 2017, 2018 and 2019 short-hand for a 'no deal' Brexit.

"The UK would be happy to accept a Canada style deal, with the accompanying trade frictions. Discussion of a deal similar to Australia is essentially a new variance on relying merely on WTO rules, or a so called Hard exit," says Jeremy Stretch, a strategist with CIBC Capital Markets.

However, we question why the market's reaction was so pronounced, particularly given Johnson's stance was well telegraphed to markets beforehand and has therefore effectively been 'in the price' of the Pound.

The same can be said for the stance of the EU, which was set out by Chief Negotiator Michel Barnier on Monday where it was made clear the EU are looking to get the UK to follow as many EU rules as possible.

"This sell-off does seem overdone given that negotiations haven’t yet begun, and that the talks will likely see red lines softened as the two sides move towards a ‘landing zone’ in which a deal can be agreed," says Michael Brown, Senior Analyst at Caxton.

Stephen Gallo, European Head of FX Strategy at BMO Capital, says the Pound should remain supported even amidst fears of a sub-optimal trade deal being agreed by the end of 2020.

"We don't think the advent of less frictionless trade with the EU (which the government is already preparing businesses for) is a sufficient reason alone to be shorting the GBP," says Gallo.

Gallo says the UK economy likely turned a corner around the end of 2019 and the potential for an increase in government spending, likely to be announced in the March budget, should provide "fiscal and economic policy dynananism".

"We're still inclined to look for buying opportunities, particularly vs the EUR," says Gallo on the prospects for the GBP/EUR exchange rate.

Trade negotiations are yet to start and we would expect the opening months to be short on the kind of detail required to move markets, indeed it is only towards year-end with deadlines looming that should real anxiety start to bite into Sterling.

Therefore, damage to the Pound should ultimately be short-lived in nature in the first half of 2020.

"GBP/USD downside is limited because the cross is significantly undervalued relative to the level implied by real two‑year UK‑US swap spreads. GBP/USD has good technical support between 1.2900‑1.3000. In our view, EUR/GBP will trade within a 0.8350‑0.8800 range over the medium term," says Elias Haddad at Commonwealth Bank of Australia.

Underpinning Sterling's decline at the start of February was a crystallisation of a view that with so little time within which to agree a trade deal, disagreement over key issues could ultimately snag progress and see the EU and UK default to less-than-optimal World Trade Organisation rules at year-end.

On Monday Michel Barnier, the European Commission's Chief Negotiator, laid out his team's proposals for forthcoming EU-UK trade negotiations, saying "we are ready to offer a highly ambitious trade deal" which would entail "zero tariffs and zero quotas on all goods entering our single market of 450 million people."

Furthermore a trade deal would entail an ambitious free trade agreement in services, with wide sectoral coverage, ranging from business services to telecommunications or environmental services and "we are also looking to include digital trade, intellectual property and access to our respective public procurement markets," said Barnier.

However, tariff-free access to the EU's single market is dependent on the UK upholding "the high standards we have on social, environmental, climate, tax and state aid matters, today and in their future developments."

The EU has also made it clear from early on that a trade deal is dependent on an agreement over fishing rights being secured. "This agreement should provide for continued reciprocal access to markets, and to waters, with stable quota shares," said Barnier.

"The UK would be happy to accept a Canada style deal, with the accompanying trade frictions. Discussion of a deal similar to Australia is essentially a new variance on relying merely on WTO rules, or a so called Hard exit," says Stretch. "Look for EUR/GBP to grind higher, back towards 0.8560, should global trade tension headwinds ease and post-Brexit political spats advance."

Brent Donnelly, Spot FX Trader at HSBC in New York takes a more philosophical stance on the outlook for the British Pound and questions the market's apparent bullish "hypothesis" on the currency.

A bearish GBP hypothesis is a consideration worth investigating, says Donnelly "as the hard part of Brexit (negotiating the future trade relationship) has just begun, the economy is weak, the central bank is thinking about hiking when they should be cutting and the country’s largest trading partner is now an adversary not an ally."

"And Scotland wants out more than ever. Sure it’s cheap, but maybe GBP is yet another value trap in a world full of value traps?" asks Donnelly.