The British Pound enters the new week towards the top end of its recent range against the Euro and U.S. Dollar with domestic focus falling on the upcoming December 12 General Election where the UK public will have a chance at delivering a decisive verdict on how Brexit should proceed.

"The Pound continues to trade near the top end of recent ranges as it awaits further political developments and, more immediately, the Bank of England’s latest policy decision on Thursday," says Nikesh Sawjani, an economist with Lloyds Bank.

The Times newspaper's poll tracker suggests that the Conservatives will emerge as the biggest party, courtesy of an ongoing lead over Labour. The Liberal Democrats are not far behind Labour in third while the Brexit Party appears to be barely managing to poll in double figures. 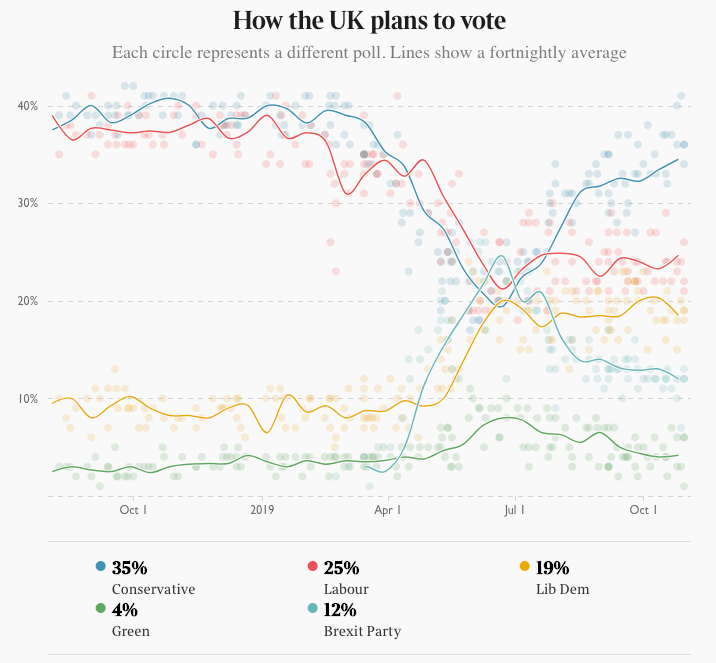 Image courtesy of The Times.

The latest YouGov poll for The Times confirms a trend of growing support for Prime Minister Boris Johnson's Conservatives that takes them to 37%, with Labour on 22%, the Lib Dems on 19%, the Brexit Party on 11% and the Greens on 7%.

YouGov will likely be the one most closely watched by markets as their polling in 2017 was easily the most accurate of the bunch.

"According to pollsters, the election result is even more unpredictable than usual. While the Tory’s have a lead in the latest opinion polls, it is not certain whether this will translate into an overall majority," says Sawjani.

Markets view a Conservative majority as being supportive of Sterling because it means a Brexit deal with the EU will almost certainly be ratified, and any future trade deal reached between the two sides will also find its passage through parliament a relatively straight forward idea.

"GBP has scope to edge higher against most major currencies. Recent polls of voting intentions show the Conservative party’s lead is widening and they could achieve a majority government. This raises the likelihood the Withdrawal Agreement that PM Johnson reached with the EU becomes the most likely future Brexit path," says Kim Mundy, a foreign exchange strategist with CBA.

A hung parliament meanwhile poses many alternative routes forward, while political stalemate and logjam would be a feature of UK politics in coming months.

An indecisive election result offers little by way of certainty for UK businesses and Sterling would understandably struggle under such an outcome.

"In the event of a hung Parliament, uncertainty will likely persist. This outcome could lead to a further Brexit delay, a ratification of Johnson’s Brexit withdrawal deal, or even a second Brexit referendum. In any event, we view a no-deal Brexit as a very low probability event, with only one party (the Brexit party) likely to campaign on a no-deal platform," says Ketish Pothalingam, Portfolio Manager, U.K. Credit, at PIMCO.

Much depends on how well the Brexit Party perform going forward, as a strong performance appears to be the key threat to the Conservatives' chances of achieving a decisive majority.

It appears for now that leader Nigel Farage is struggling to create a narrative that is hitting home with Brexit supporters. His key line of attack appears to be that Johnson's Brexit deal means 'Brexit in Name Only'.

However, key figures in the Brexit establishment, such as Aaron Banks who has long bankrolled Farage, disagree with this assessment. They note that should the Brexit Party support result in a hung parliament the odds of Brexit being reversed altogether grow substantially.

If we were to do a risk assessment on Sterling we would note that the route to a 'no deal' is virtually closed off, as this is an outcome that only a Brexit Party win could deliver.

As such, nervousness towards the Pound will ease somewhat we believe, ensuring downside protection.

In short, the balance of risks are tilted to the upside.

"The Pound has been the safety valve of the Brexit story, reacting to news fast and efficiently. Despite the recent rally, we still think the currency is fundamentally cheap. That said, it will likely not return to pre-referendum levels in the near term, given ongoing uncertainty over the nature of the future EU/U.K. trade arrangement," says Pothalingam.

An optimistic mood amongst global investors mean the UK currency is losing ground against the likes of the New Zealand Dollar and South African Rand.

Aiding investor sentiment on Monday, U.S. Secretary of Commerce Wilbur Ross said that a phase-one deal will be reached with China soon and that the American companies will be given licenses to do business with the Chinese tech giant Huawei ‘very shortly’.

The likes of the Rand, New Zealand Dollar, Australian Dollar and other currencies that are tuned into the health of global trade are understandably advancing on Sterling in this environment.