Pound Sterling was seen holding this week's gains against the Euro, U.S. Dollar and other major currencies after opposition parties in the House of Commons agreed they would not agree to an election taking place in October.

The move is significant as it ensures Prime Minister Boris Johnson does not get his wish for an October 15 General Election, thereby virtually guaranteeing that a 'no deal' Brexit will not happen in 2019.

The Prime Minister wanted an election to be held before a key European Council meeting scheduled for October 17 where the fate of Brexit would ultimately be decided. By asking for an October 15 vote Johnson had effectively sought to give the public a say on whether they wanted a 'hardline' Brexit, or a delay.

The Labour, Liberal Democrat and SNP parties have agreed not to back another Fixed-term Parliaments Act motion that will be brought forward by the government on Monday.

A Liberal Democrat spokesperson said the joint decision had been agreed following a conference call.

"We were all clear we are not going to let Boris Johnson cut and run," said the spokesperson. "The Liberal Democrat position for a while now is that we won't vote for a general election until we have an extension agreed with the EU. I think the others are coming round to that. As a group we will all vote against or abstain on Monday."

The move by the opposition parties will certainly fuel anger amongst those wanting a clean break from Europe, but purely from a currency market perspective the decision will further underpin Pound Sterling's ongoing recovery rally.

The Pound remains beholden to Brexit sentiment, and this week has seen the Brexit dial swing away from a 'no deal', ensuring the currency recovered from Monday's multi-year lows against the Dollar and kept a multi-week rally against the Euro alive.

"Sterling has been buffeted by the frenetic pace of events in Parliament over the last couple of days. Removing the immediate threat of a no-deal Brexit has helped the pound recover some of its recent weakness. If, as we expect, Brexit is delayed until January 2020 and an election is held after October, we would expect this recovery to continue," says Dean Turner, Economist at UBS AG.

The Pound-to-Euro exchange rate is quoted at 1.1151 at the time of writing, having been as low as 1.0930 at the start of the week. Banks are offering exchange rates in the range of 1.0872 and 1.0950, while independent international payment providers are offering rates around 1.1090. 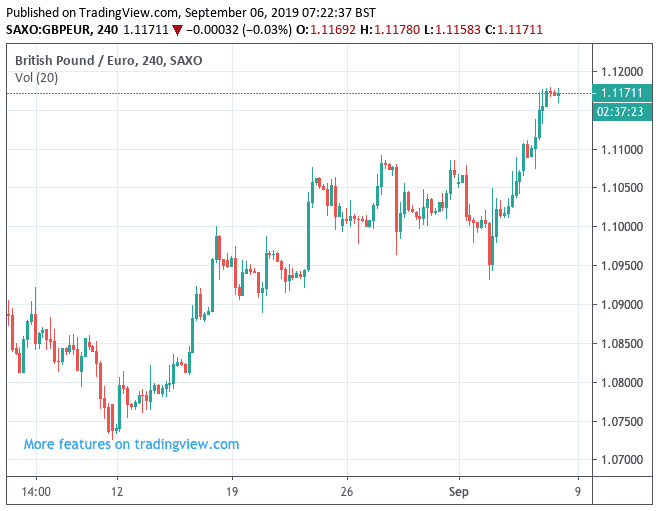 "Although a no-deal Brexit is still on the table, the likelihood of that has reduced dramatically. Combined with USD weakness, the British Pound has managed to record its biggest 1-day gain since March. A delay to Brexit until 2020 could see more gains for GBP although further upside past 1.30 could be limited given the uncertainty that elections can create," says Joe Manimbo, an analyst at Western Union. 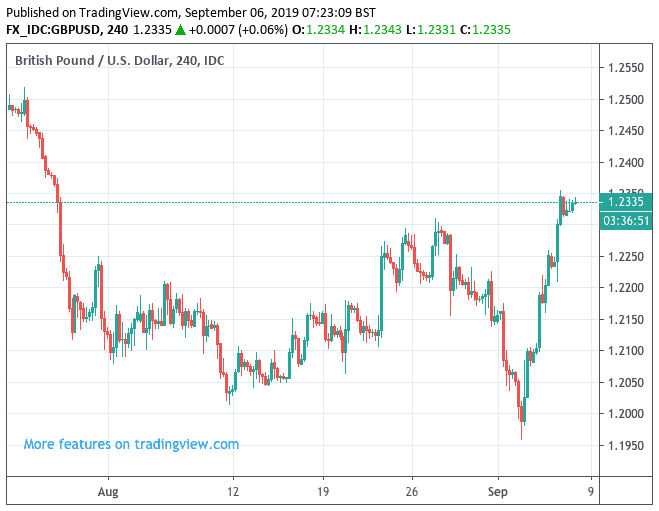 No doubt, Sterling has seen near-term support build and we see downside risks as having diminished significantly over recent days.

Despite gains, conviction in Sterling's ability to rally sustainably amongst the institutional analysts we follow is low, with all citing the fact that while a 'no deal' Brexit has been delayed, it has not yet been killed off.

"This week has seen the chances of a No Deal Brexit by the end of October 31st diminish significantly and this has supported the Pound. However, the upside for the Pound from here appears to be limited," says Lee Hardman, Currency Analyst with MUFG in London.

Hardman says measures taken by parliament to prevent a 'no deal' merely delay the process; they don't eliminate the source of chronic uncertainty that has bedevilled the Pound over recent years. MPs have pushed out "the timeline for No Deal Brexit risk a little, rather than significantly diminishes it overall."

Election fever is in the air, and markets will now start increasing their focus on how the vote might play out. Opposition parties in the House of Commons are however yet to back Prime Minister Boris Johnson's call for a snap General Election, arguing that they will only accept a vote if it is conducted after Brexit has been delayed.

Johnson is in full campaign mode, goading Labour into backing his call for a vote before Brexit, offering the poll up as a chance for the UK public to make a decisive call on the kind of Brexit they want: do they want the harder line on Brexit the Conservatives are pushing for, or more delays and a potential cancellation of Brexit under Labour.

Sterling would likely have reacted in a negative fashion were a General Election granted on October 15 as it firmly keeps an October 31 'no deal' Brexit in play.

Opposition parties will be aware that by timing the vote to after October 31 they hurt Boris Johnson's chances of winning, as the 'leaver' electorate will have to consider his broken promise on having taken the country out of the EU by October 31.

"Markets are now focusing on the potential election outcome, where we see a rising probability that the Conservatives could lose voters to the Brexit Party and the opposition gaining momentum, with a higher likelihood of events leading to a soft or aborted Brexit than to a hard Brexit," says David Alexander Meier, an economist at Julius Baer.

But, a vote after October 31 raises the chance of a Labour-lead coalition, which could in turn be problematic for Sterling as an avowed socialist government is perceived as being decidedly anti-business.

"Worst case scenario for the GBP: Boris succeeds with no deal Brexit on 31st October, then loses a General Election to Corbyn. I think in that scenario you couldn’t even confidently say parity is the bottom," says Joshua Raymond, Director at London-based broker XTB.com, referencing where the Sterling-Euro could go in a worst-case scenario.