- Pound tipped to "limp along"

UK inflation came out on the strong side when released on Wednesday August 14, which would typically prove supportive of the British Pound and we have seen some gains for the under-pressure UK currency.

However, we notes the advances are relatively contained and this supports the notion that strength in the Pound is likely to remain limited in the current environment while the market displays a strong bias towards the downside.

According to the ONS, inflation for July read at 2.1% year-on-year, ahead of expectations for a reading of 19%, meaning the rate is now taken above the Bank of England's target of 2.0% inflation.

Core inflation - the kind that measures more organic sources of inflation, thereby excluding global variables such as fuel prices - rose 1.9%, ahead of expectations for 1.8%.

Inflation picked up from June largely thanks to clothing and footwear prices beginning to rise again after having been a drag on prices for some months now.

Archer does say that the data will however unlikely alter the interest rate stance at the Bank of England, and this would explain why the Pound has not reacted in a positive manner to what would typically be an outright positive for the currency. 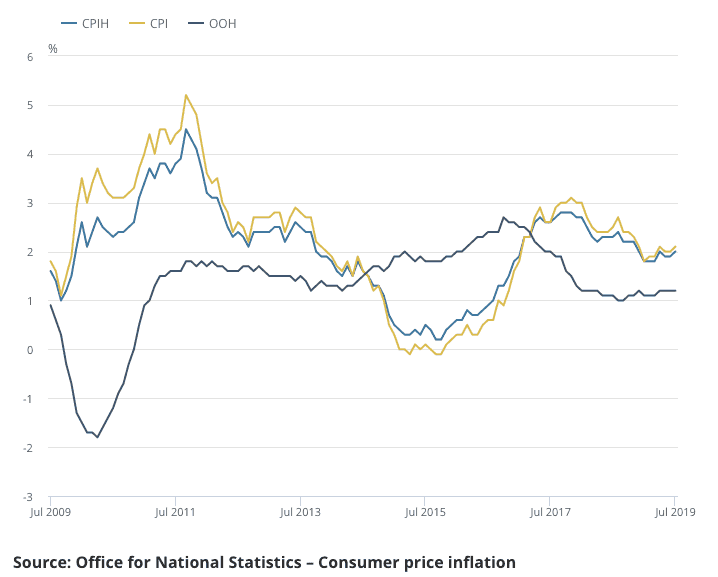 "The fact that Sterling is trading only marginally higher than the level that it started the week at despite UK wages growing at the fastest pace in 11 years and inflation unexpectedly pushing higher, underscores how focused pound traders are on Brexit," says Fiona Cincotta, Senior Market Analyst at City Index.

We suspect that only a disappointment would have moved Sterling as that would have fed the current market narrative that the UK currency is a sell amidst a slowing economy and expectations for a looming political showdown over Brexit in the autumn.

We note how disappointing GDP data out last Friday triggered a deep selloff in Sterling whereas the better-than-forecast wage numbers out on Tuesday saw the currency merely tread water.

In short, the Pound's response function is certainly to the downside when it comes to data. 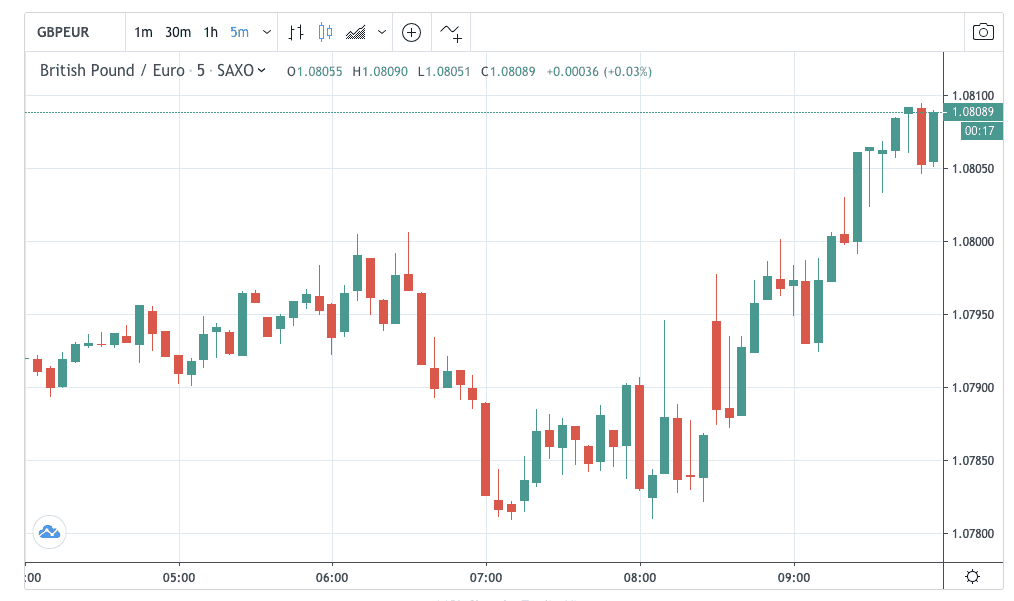 Above: Sterling ticked higher against the Euro and other currencies following the inflation data release.

Inflation is important for Sterling valuations as rising inflation tends to illicit interest rate rises at the Bank of England who are tasked with keeping inflation around the 2.0% level.

By raising interest rates the Bank acts as a buffer against the economy overheating.

A side effect of higher interest rates are inflows of foreign capital as global investors seek returns on their capital. This bids up the value of a currency and explains why Sterling tends to appreciate when the Bank of England is in an interest rate raising cycle.

However, the Bank has warned it is unlikely to raise interest rates until the nature of Brexit is made clear, and therefore today's inflation numbers will unlikely shift the dial on interest rate expectations.

Expect any reaction by the Pound to today's data to be short-lived in nature as foreign exchange traders return focus to British politics.

Above: Analysts at ING explain why they see further downside in the Pound.

"For now the Bank of England has bigger worries than inflationary pressure. And the markets quickly concluded that Britain’s rate-setters will continue to keep their inflationary mandate firmly in the drawer, and focus instead on the UK’s shrinking economy and the rising danger of recession," says Sam Fuller, Director of Financial Markets Online. "The chances of an interest rate rise in the UK remain negligible. As a result the Pound is set to continue its limp progress – little moved by economic data and instead a hostage to political events."

"If the economy continues to slow, demand will, in theory, weaken too, suggesting that inflation may fall below the Bank's target rate. However, the depreciation of the pound over the past month in particular will make imports more expensive and drive up price growth."

The UK economy is dominated by the services sector, which is noted to be labour intensive compared to other sectors, and for this reason rises in wages do tend to be felt in overall inflation dynamics.

"We’d expect this to add a bit of upside to consumer prices in the medium-term. This relationship is shown quite neatly by the chart below, which matches so-called ‘core services’ inflation against wage growth with a 12-month lead," says Smith. 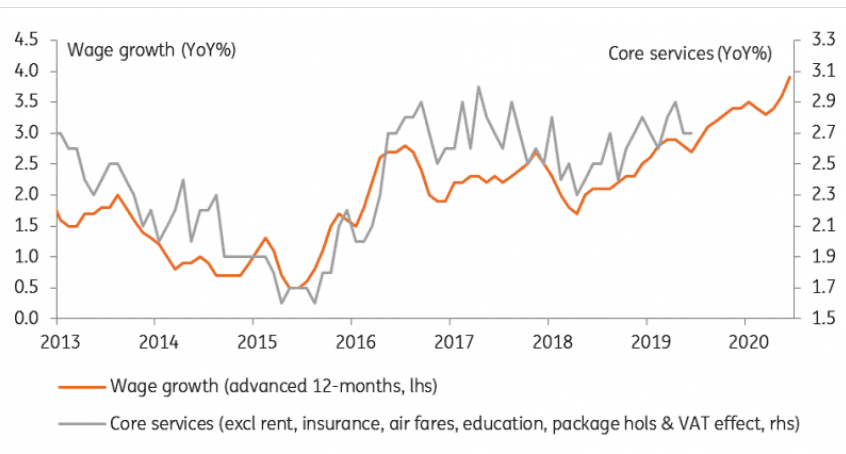