Above: Prime Minister Boris Johnson is currently touring the regions and nations of the UK. Image (C) Number 10.

- Sell-off triggered by Gove comments that 'no deal' highly likely

The British Pound has come under significant selling pressure against the Euro, Dollar and other major currencies on Monday, July 29.

Declines of more than 1.0% against major currencies come as the UK's new Prime Minister Boris Johnson cements his administration's stance that only a fresh new Brexit deal will prevent the UK from leaving the EU on World Trade Organisation rules on October 31.

The hardened rhetoric suggests that the gap between the EU and UK might simply be too wide to bridge if a 'no deal' Brexit is to be avoided.

The comments from Johnson further ramped up expectations for a 'no deal' Brexit on October 31, sending Sterling lower as a result: 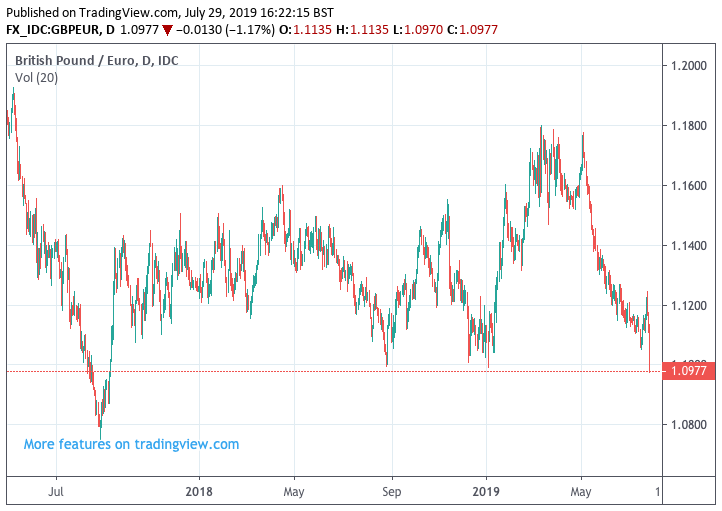 Above: Sterling-Euro breaks below the 2018 lows and races towards the 2017 lows.

“Tin hats time: All the stops are out and the Pound is now in free fall. We could be down two big figures in the day if the $1.22 level doesn’t hold. What started as a sharp leg lower this morning has snowballed into one of its worst days since the referendum, with the pound now at its weakest since March 2017," says Neil Wilson, Chief Market Analyst for Markets.Com. "There is now a very real chance that the pound will fall to $1.20 and even below. Remember the previous post-2016 low was before no-deal was on the table – it was all talk of a hard v soft Brexit – no deal wasn’t even being discussed.”

Both currencies are presently suffering their largest one-day fall since March as it becomes abundantly clear that the chance of a new negotiated Brexit settlement is increasingly out of grasp.

"What we want need to do is to build a new partnership with all the things that matter to us, sharing cooperation on defence, on security, on intelligence, cultural, scientific collaboration, everything that you would expect," Johnson said.

"At the core of it all a new free trade deal that allows us to take back control of our tariffs and our regulations and to do things differently where we want to," he said.

Markets entered the new week with expectations for a 'no deal' Brexit pegged at 30% according to analysis from Citi.

The value of Sterling is now comparable to the levels seen in 2017 when then-Prime Minister Theresa May started making it clear she would seek a negotiated Brexit that would include a transition period.

It was this committment that assured markets and businesses alike and prompted a recovery in the value of the Pound.

In essence, the UK has pressed the rewind button to its Brexit settings of two years prior, and Sterling has obliged.

"We see more GBP weakness to come," says Petr Krpata, a currency strategist with ING Bank. "The current sterling meltdown is in line with our view that GBP risks are heavily skewed to the downside given the Brexit uncertainty and rising odds of an early election (our base case). The latter suggests EUR/GBP will head towards the 0.95 level with GBP/USD falling to 1.18."

Growing expectations for a 'no deal' and subsequent pressure on Sterling follow weekend press reports that a clear commitment towards a 'no deal' Brexit on October 31 has been made by the new UK administration. Michael Gove, the minister responsible for 'no deal' preparations, said the government was “working on the assumption” that Brussels would not strike the fresh agreement the UK government requires to avoid a 'no deal' exit.

Since coming into office, Johnson has stated any progress towards a negotiated Brexit settlement can only be achieved if EU leaders agree to renegotiate the Withdrawal Agreement. Specifically, Johnson wants the Irish backstop clause removed in its entirety.

The EU have stated repeatedly the deal struck between Johnson's predecessor Theresa May and the EU is non-negotiable.

"While we are optimistic about the future, we are realistic about the need to plan for every eventuality. The EU’s leaders have, so far, said they will not change their approach — it’s the unreformed withdrawal agreement, take it or leave it," Gove wrote in the Sunday Times. "We still hope they will change their minds, but we must operate on the assumption that they will not."

Gove's comments are cited by Adam Cole, a foreign exchange strategist at RBC Capital Markets, as one reason for Sterling's underperformance on Monday:

"Cabinet minister Gove’s comments over the weekend that the government is operating on the assumption of no deal seem far removed from PM Johnson’s “million to one” characterisation during his campaign."

Gove will chair meetings of civil servants and political advisers every day until Brexit is delivered.

Sajid Javid - the new Chancellor - is meanwhile readying to announce an urgent spending platform to prepare for Brexit on October 31.

Javid told the Sunday Telegraph he will overhaul of the Treasury’s approach to Brexit, beginning with “significant extra funding” this week to get Britain “fully ready to leave” on time, with or without a deal.

The additional spending will include financing one of the country’s “biggest ever public information campaigns” to ensure individuals and businesses are ready for a 'no deal'.

He states that “all necessary funding will be made available” to ensure the UK is ready to leave the EU on October 31.

"Keep calm & stay bearish," says Emmanuel Ng, an analyst with OCBC in Singapore. "With PM Johnson peddling the hard line on the Brexit negotiations, and the Bank of England also turning its back on rate hikes, there might be little in the way of an upside for the GBP for now."