- Sterling to be moved by Brexit developments

- Aussie to be driven by inflation and geopolitics

The 4 hour chart - used to determine the short-term outlook, which includes the coming week - shows how the pair started going sideways after peaking at the October 16 highs. 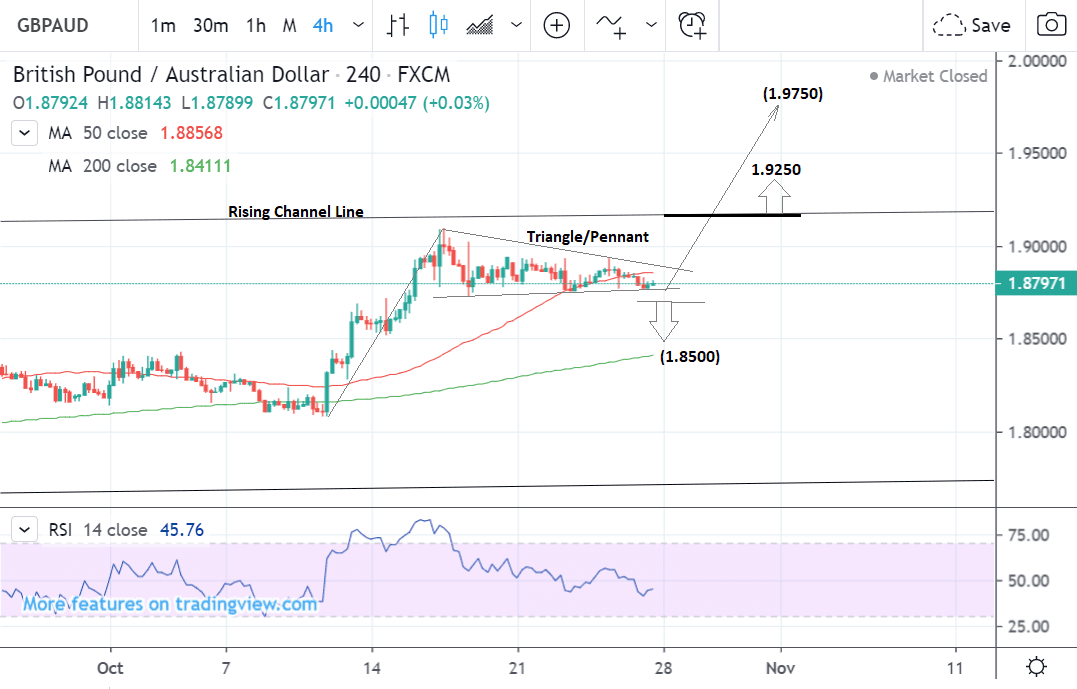 This sideways consolidation has formed a triangle or pennant pattern. The shape of the pattern means it is difficult to predict in which direction the eventual breakout will occur.

The established trend means there is a bias to further upside since the existing trend is always favoured.

However, this is not a high-confidence call as the same time the bottom of the triangle is flat, meaning it may be a right-angled triangle, and this suggests a heightened risk of a downside break.

Another bearish indicator is the especially weak RSI momentum indicator in the bottom panel.

A break above the rising channel line at around 1.9120 would provide the greenlight for a continuation higher to a target at 1.9250.

At the same time, a break below the base of the triangle and 1.8717 would provide confirmation for a continuation down to a target at 1.8500.

If the pattern is a bull pennant then the market is showing the potential to rise up to a target at 1.9750 eventually.

The daily chart shows a clearer bull pennant pattern which could suggest a breakout higher to a target above the channel line highs at 1.9750. 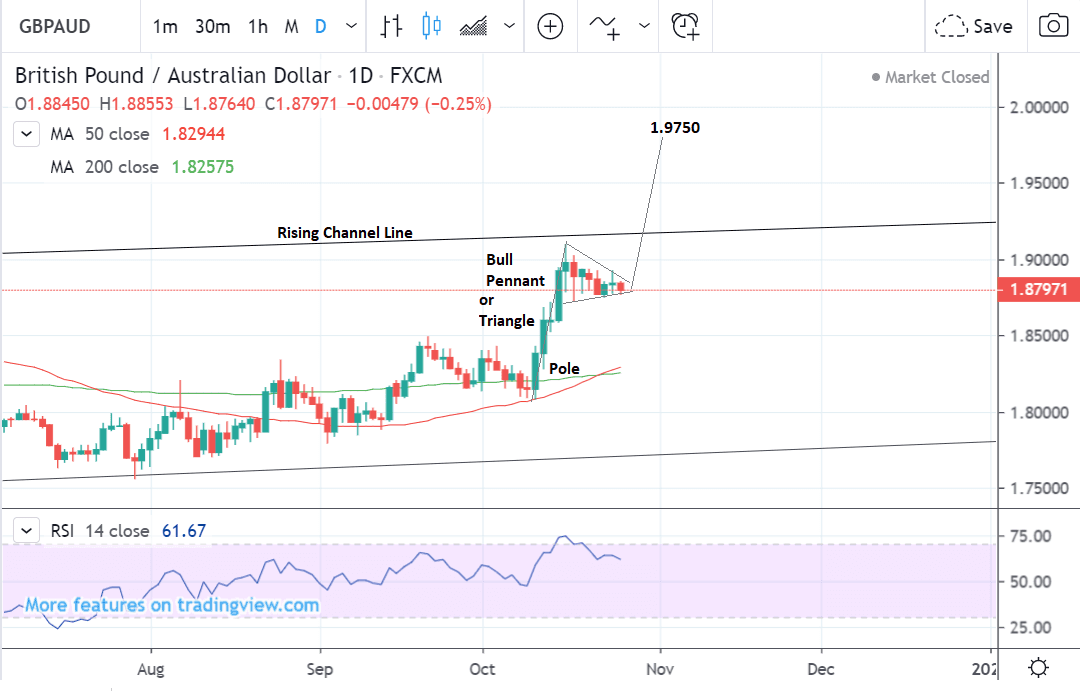 A break above the channel line would be required to confirm a continuation to such a target, however, signalled by a move above 1.9300.

The weekly chart shows the bigger picture of the rising channel which began at the 2017 lows. 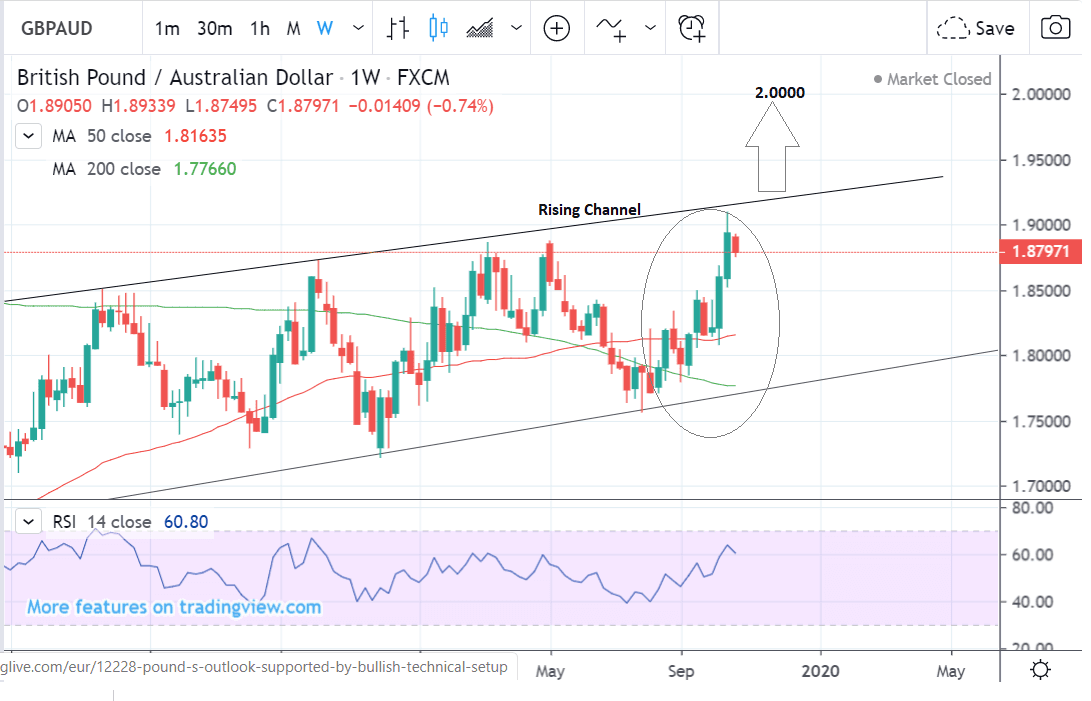 The most recent move up within the channel has been quite steep and there is a possibility that it could breakout and go even higher to an upside target at 2.000 eventually.

Reaching the target would be conditional on a breakout of the channel, however, signalled by a move above 1.9500.

The Pound this Week: EU Decision on Brexit Extension Key

The main drivers for the Australian Dollar in the week ahead are likely to be Australian CPI data out on Wednesday, a speech by RBA governor Lowe on Tuesday and Chinese PMI data out on Thursday.

Third-quarter CPI data is forecast to show a 0.5% rise compared to the second quarter and a 1.7% yearly rise when it is released at 1.30 GMT on Wednesday.

It is important because it could influence Reserve Bank of Australia (RBA) policy on interest rates which is a major driver of the Aussie exchange rate.

If inflation comes out below-expectations it could prompt the RBA to cut base interest rates again in November which would weaken the Australian Dollar.

But since the RBA is actually quite keen to keep the Aussie Dollar weak (to encourage exports and help drive growth), there is a growing risk they will cut rates again in November.

“Continuing weak and below target inflation is consistent with our view that the RBA will undertake further monetary stimulus initially via more interest rate cuts in the months ahead,” says Dr Shane Oliver, chief economist at AMP Capital.

The U.S. Federal Reserve is almost certain to cut interest rates on Wednesday and this too could prompt a cut from the RBA in order to keep the exchange rate competitive for exporters.

“As Governor Lowe noted at the IMF: “…we have to take these shifts in global interest rates very seriously if we sought to ignore them our exchange rate would go up…[which]…would be unhelpful,” says Dr. Oliver.

RBA governor Lowe will actually deliver a speech on Tuesday at 7.45 which could reveal his intentions around the timing of the next cut, if there is one.

Chinese PMI data could also influence the Aussie when it is released at 2.00 on Thursday because trade between the two is so intertwined.

Manufacturing PMI is forecast to remain at 49.8 in October the same as it was in September.

Hong Kong protests could also influence global risk markets and the Australian Dollar if the U.S. Senate goes ahead and votes to make a proposed Human Rights and Democracy Act law which would lead to the automatic imposition of sanctions on HK in the event of human rights or democracy abuses.

The new law has already been voted through Congress and could get a vote in the Senate as soon as next week. If it is approved it will enrage the Chinese and could sour trade relations.