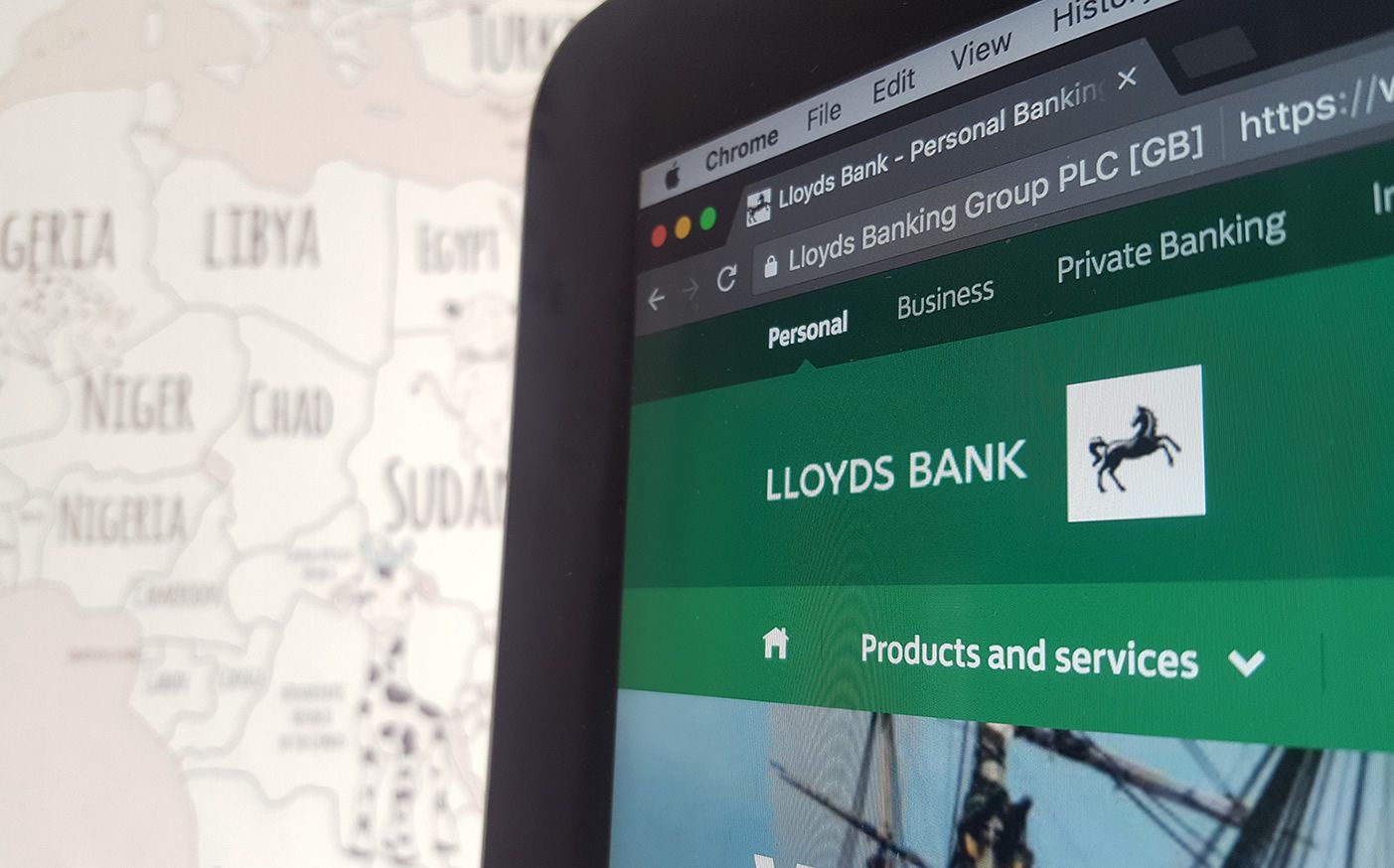 The Pound is set to rise against the Euro and Dollar this year, according to the latest forecasts from Lloyds Bank, thanks to a resilient economy and a reduction of so-called no deal Brexit risk.

Lloyds, one of the UK’s largest high street lenders, has about-turned on the projections it issued back in January following a quarter in which the market has moved against the consensus on many of the world’s major currencies.

The Euro is also now projected to underperform earlier forecasts, while the U.S. Dollar is seen remaining stronger for longer.

Lloyds has dropped its January forecast for a Bank of England interest rate hike in the third-quarter of 2019 and now looks for just one hike in 2020. But it’s lifted all of its Pound-to-Dollar and Pound-to-Euro rate forecasts.

The bank has also cut its U.S. interest rate forecasts, from two hikes in 2019 to no hikes this year or next. However, it’s upgraded most of its U.S. Dollar forecasts.

On Europe, Lloyds has abandoned its call for a European Central Bank (ECB) interest rate hike in final quarter of 2019 and now looks for lift off around June 2020. The bank has also slashed its EUR/USD forecast significantly from January’s optimistic level.

Meanwhile, the Antipodean New Zealand and Australian Dollars are a tale of two cities, with recovery envisioned for the former and further losses for the latter, in the latest International Financial Outlook.

Below is a selection of quotes outlining exactly what all of these changes will mean for individual currencies this year. 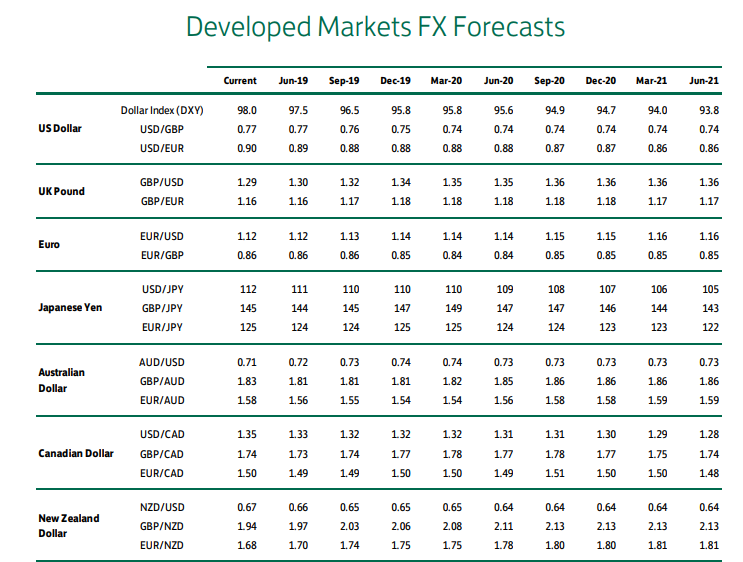 “A glance at the fundamentals lends a strong case as to why the GBP should arguably be firmer against the USD. UK economic data have generally beat expectations, defying the weaker global backdrop and elevated domestic uncertainty. The resilience of the consumer in particular has been impressive, helped by the tightness of the labour market and solid real wage growth. But, clearly, the Brexit-related risk premium is playing a role.”

“After developing in a narrowing range in recent months (1.34-1.28), GBP/USD has broken lower in recent days. However, with market positioning now neutral, there is scope for trending moves in either direction. While we remain positive on the prospects for the pound, the high degree of uncertainty leaves GBP/USD susceptible to bouts of significant volatility.”

“The GBP has benefitted from the revising down of euro area growth prospects and the pushing back of market implied policy rate hike expectations. From an economic perspective, there is arguably a better case for the Bank of England to adopt a more hawkish stance than the ECB.”

“With major economic and political forces pulling the currency pair in opposing directions, we see little reason for GBP/EUR to decisively break its post EU referendum range (1.10-1.20). That said, the currency pair could experience periods of elevated volatility. We forecast GBP/EUR at 1.18 at end 2019 and end 2020.”

“The waning effects of President Trump’s fiscal stimulus saw the rate of growth slow into the end of last year and the Federal Reserve has now paused its policy normalisation process.”

“The ‘dot plot’ no longer signals any interest rate rises in 2019 and we have revised our forecast to reflect no further increases this year and next. Meanwhile, risk sentiment has firmed following last December’s global equity sell-off. Importantly, US equity markets have rallied back towards all-time highs, and in doing so are providing support to USD/JPY.”

“The US economy defied expectations again in Q1, growing by a robust 3.2%, despite the record-long government shutdown. However, support for the US dollar is proving elusive as market expectations of a cut in policy interest rates continue to build. This could be tested, if data remain strong and the Fed stays ‘patient.”

“EUR/USD has trended lower throughout 2019, falling from a high of 1.1572 in January to 1.11 in late April. Given the precipitous collapse in Eurozone sentiment, one might have expected the currency to be under greater pressure against the US dollar but its losses may have been stymied by USD selling following the dovish shift in US interest rate expectations.”

“ECB President Draghi indicated that policy rates would be on hold at least until the end of 2019 and revised down outlooks for both growth and inflation. We forecast euro area GDP growth to slow to 1.3% in 2019, from 1.8% in 2018. CPI inflation is predicted at 1.3% this year, rising to 1.5% in 2020, well below the official target of ‘close to but below 2%’. However, from here, we see a reasonable chance of EUR/USD moving higher.”

“The market is holding a notable ‘net short’ euro position and technical studies are biased towards euro strength. Our fair value models suggest EUR/USD is undervalued. We forecast EUR/USD at 1.14 at end 2019, rising to 1.15 at end 2020.”

“Among developed-market currencies, the Australian dollar is among those that are usually the most sensitive to risk sentiment. It is therefore somewhat at odds to see global equity markets reaching all-time highs, volatility measures falling towards all-time lows, key commodity prices rallying and, at the same time, the AUD/USD trading at its medium-term range lows.”

“While it is a worry that the currency pair has not gained more traction to the topside with such a supportive external environment, we look for these factors to eventually pull the AUD higher. For the time being, however, the market is clearly more concerned with domestic monetary policy expectations, which continue to pressure the currency.”

“Alongside slowing growth prospects, the surprisingly sharp fall in inflation in Q1 has raised the risks of policy easing from the RBA, and interest rate markets estimate a more than 60% chance of 50bps worth of policy rate cuts from the central bank by the end of the year. However, such ‘pricing’ is premature. The stabilisation of Chinese GDP growth and possible resolution of US-China trade negotiations could boost Australian exports, improve the domestic outlook, and further buoy risk appetite. Were such conditions to prevail, AUD/USD would likely rally.”

“The fact that the Canadian dollar is in the middle of its 2019 range, despite Brent crude prices rallying almost 50% from their recent lows, is out of the ordinary. Given Canada’s long-standing status as a major exporter of oil, it is unusual to see its currency fail to build momentum in the backdrop of such a sharp price move. This, however, is a sign of the market’s concerns around US and Canadian economic and monetary policy prospects.”

“The Canadian economy, at least on the surface, remains buoyant. GDP growth for January beat expectations, the labour market is close to its cyclical lows, and consumer spending is recovering from a subdued finish to 2018. Beyond the economic data, the market holds a sizeable ‘net short’ CAD position and interest rate markets are ‘priced’ pessimistically. As such, we expect the Canadian dollar to appreciate.”

“Having held up well in difficult conditions between November and January, it has been slightly surprising to see the NZD soften by almost 5% against the USD in an environment in which it would usually perform well. With equity markets moving towards all-time highs, global risk sentiment is relatively buoyant. Moreover, the price of milk, which is a key New Zealand export, has rallied close to its highest level since 2017. Despite these developments, monetary policy dynamics are weighing on the currency.”

“While the Federal Reserve has given a firm indication that policy rates are on hold, the 2-year NZ-US interest rate differential has moved 15bps in favour of the USD over the last month, following a gradual deterioration in NZ data and a reinforcement of the RBNZ’s ‘dovish’ stance. These forces are likely to continue to pull NZD/USD in opposing directions, which should leave it around current levels over the coming quarters.”