The U.S. Dollar is losing its lustre for investors and will decline steadily over the coming year, according to the latest forecasts from Commerzbank.

This means other currencies that have been squashed by a resurgent Dollar this year will soon be given some breathing room.

Investors are likely to shun the Dollar as signs of an end to the current Federal Reserve (Fed) interest rate cycle appear on the horizon next year.

The Fed has raised rates eight times since the end of 2015 and is widely expected to lift the Federal Funds rate above 3% in 2019. But that will be about as far as U.S. borrowing costs go before coming back down again.

And markets are likely to respond negatively to signs of change on the horizon a long time before the Fed actually stops raising interest rates.

"The inflation process is still not running as it has in previous Fed cycles. So it is unlikely to become a really normal cycle of interest rate hikes, not only because the pace is more leisurely than before, but also because the cycle ends earlier and a massively USD-positive "active" monetary policy is not needed to curb inflation," says Ulrich Leuchtmann, head of currency strategy at Commerzbank.

This is good news for most other currencies elsewhere in the world because almost all of them have been clobbered in 2018 by diverging outlooks for interest rates in the U.S. and rest of the world.

That created an incentive for investors to sell their respective domestic currencies and buy the U.S. Dollar instead, leading to steep declines for the Australian and New Zealand Dollars as well as the Euro and British Pound among others.

"The market believes that an amicable agreement will be reached in the end, something we project likewise. The reality, however, is that an amicable settlement is likely to drag on for some time yet, which means that we expect the pound to weaken somewhat due to the uncertainty surrounding a possible exit without an agreement (“hard Brexit”). We see a 40% likelihood of a no-deal Brexit."

"An important reason for the overall robust development of GBP over the last quarters is also that the British economy has survived the initial shock of the Brexit decision far better than expected. As a result the Bank of England (BoE) was able to focus much more on the inflationary risks. In November 2017 it reversed the rate cut it implemented shortly after the referendum and raised the key rate once again in August 2018 to now 0.75%."

"However, the high uncertainty surrounding the actual Brexit in March 2019 and the prospects thereafter points towards an only very cautious tightening of monetary policy."

"The uptrend in EUR-GBP we predict for next year is mainly based on EUR strength once a first ECB rate hike begins to emerge. This is likely to overshadow the GBP recovery."

"The dollar side will also remain dominant in GBP-USD. As the Fed continues with its rate hike cycle Sterling will remain under pressure against USD until the end of 2018. Next year an end of the rate hike cycle is likely to emerge so that the dollar will then ease." 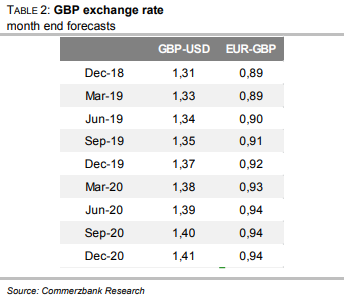 "The Fed now appears to be raising its key interest rate largely by autopilot. The impression that the US monetary authorities will continue to gradually raise the key interest rate over the next few quarters (f the positive economic environments remain unchanged) creates the impression of a cycle – finally after more than 2 ½ years of interest rate hikes - and thus justifies a generally strong dollar. However, there is not much left in this respect."

"For structural reasons, the inflation process is still not running as it has in previous Fed cycles. So it is unlikely to become a really normal cycle of interest rate hikes, not only because the pace is more leisurely than before, but also because the cycle ends earlier and a massively USD-positive "active" monetary policy is not needed to curb inflation. This inflation dynamic is still lacking. And thus also from here on the big USD positive arguments. Support for the dollar is eroding."

"Support for the dollar is eroding, new arguments are being added for the euro, so that it might remain well supported. It seems that everything is already pointing to higher EUR-USD rates as soon as the Italian issue is off the table."

"Next year, ECB policy could even provide moderate support for the euro. If it raises its key interest rate at the end of 2019 - which appears likely without an Italian crisis - many market participants will probably see this as a signal that an at least gradual interest rate normalization cycle is now beginning. This impression might turn out to be wrong."

"For 2020, of course, we expect the strength of the EUR to slowly lose momentum. For the foreseeable future, the ECB will hardly be able to switch to autopilot (like the Fed did) and raise interest rates quasi-automatically."

"Europe’s central bankers are prevented from this degree of normalization because of Europe's structural problems, which - let us not forget this lesson from the eurozone crisis – have the potential to influence ECB’s monetary policy." 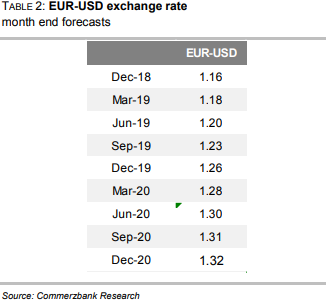 "We remain of the view that the fundamental conditions suggest that the AUD should appreciate. The Australian economy even recorded higher growth than we had anticipated recently. The labour market, which had long been a concern for the Reserve Bank of Australia (RBA), is developing in a very positive manner and therefore supports a positive outlook."

"However, the weak wage pressure remains an issue, although this problem is not confined to Australia but can be witnessed in almost all industrialised nations. It nonetheless explains the cautious approach on the part of the RBA as regards the inflation outlook."

"Even if the central bank forecasts, as we do, that inflation will stabilise at its inflation target next year – as robust economic growth and the depreciation of the Australian dollar over the past months point towards rising price pressure –, and says that at one point in time higher interest rates will be neeed, it is very cautious about signalling the start of a normalisation of its monetary policy."

"We expect that the RBA will adjust its communication next year at the latest in such a way that an interest rate hike will become more likely in spring from a market perspective. The Australian dollar should then recover, which is why we expect the currency to strengthen against both the US dollar and the euro next year. The AUD would certainly also benefit from a de-escalation in the trade war." 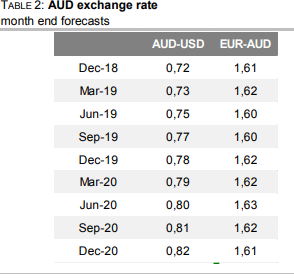 "As the biggest risk for the economic outlook was removed with the NAFTA agreement, there is now little to prevent the Bank of Canada’s (BoC) normalisation plans."

"Developments on the labour market point towards increasing inflation pressure ahead. After all, the unemployment rate has fallen to historic lows, which should lead to higher wage growth. A further rate hike in October is therefore likely to be a fait accompli. Nevertheless, short term the Canadian dollar’s appreciation potential is limited."

"Further rate hikes have already been priced in by the market and secondly the US dollar is currently still benefitting from a positive US rate outlook in view of a booming US economy and a tight labour market. Until year-end we therefore expect a sideways move in USD-CAD."

"As soon as the debate about an end of the rate hike cycle and speculation about a weakening of the US economic growth start, the US dollar is even likely to come under increasing depreciation pressure. At the same time we assume that the BoC will start to hike its key rate at more regular intervals."

"Even though the market now expects three rate hikes for next year we still see upside scope for the longer term rate expectations, which results in some appreciation potential for CAD. Overall this points towards a gradual uptrend in USD-CAD." 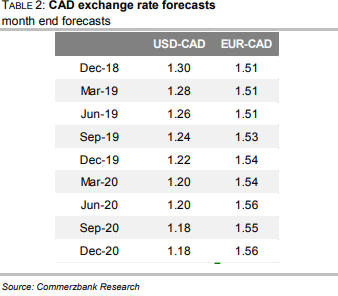