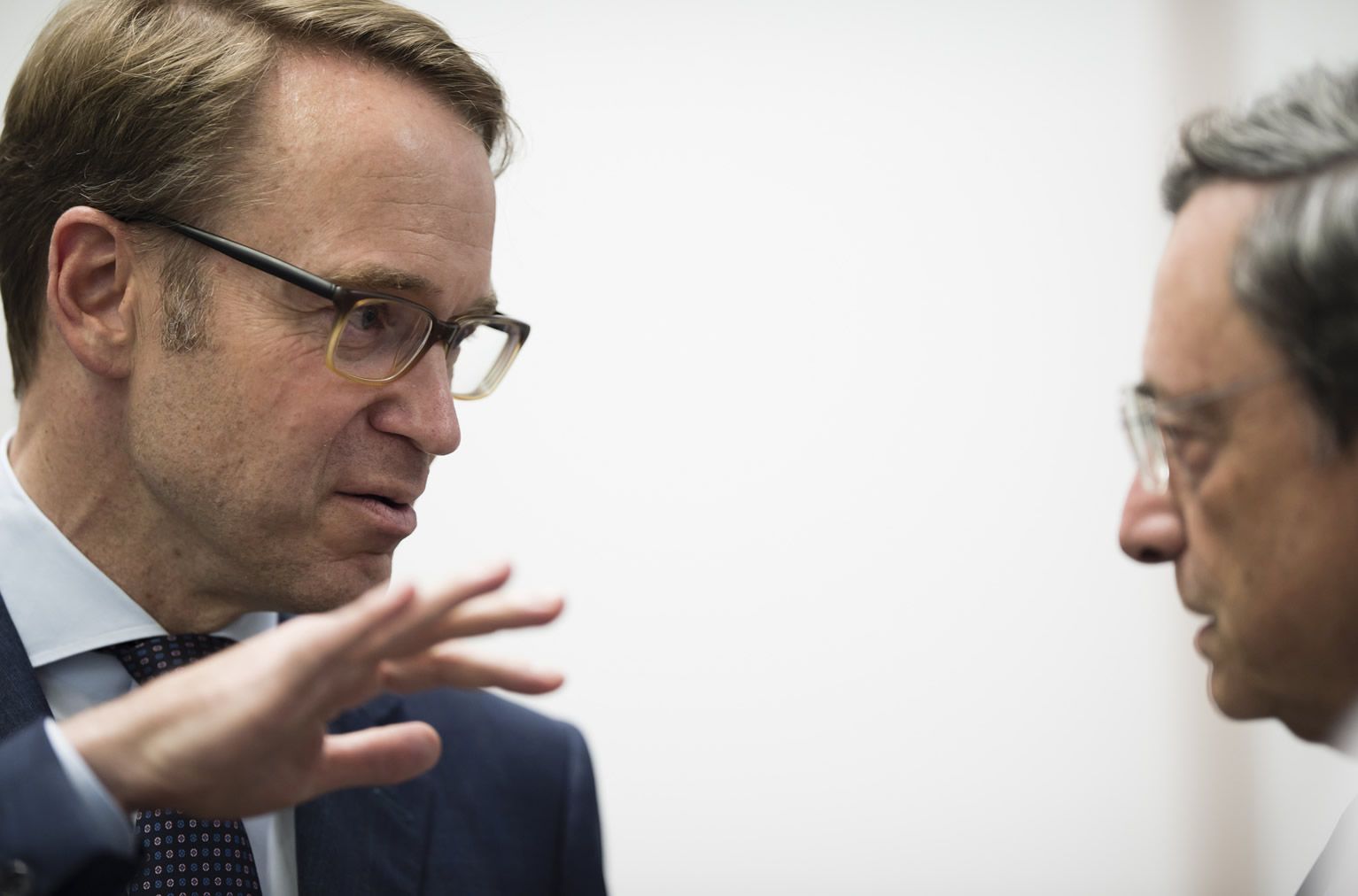 - Yet doubts remain because of his 'typically German' monetary policy stance

- Most recent criticism has come from Italy's new Lega coalition

Unless Jens Weidmann takes over as head of the European Central Bank (ECB) when Mario Draghi steps down in October 2019, the Euro could be at risk of decline we are told.

The suggestion reminds us of just how much influence the head of the ECB carries on overall monetary policy and therefore the 'hawkishness' or 'dovishness' of the next president could have a bearing on interest rate and exchange rate expectations.

Weidmann certainly falls into the 'hawk' category - he is currently the head of the German Bundesbank and has been an outspoken critic of the ECB's ultra-loose monetary policy while being a notable obstacle to the ECB's quantitative easing bond-buying programme.

If he were to take over, therefore, it would probably mean interest rates would rise in Europe more quickly than is currently expected (all other things being equal).

“The markets see a first rate hike around the middle of the year 2019, which is probably not entirely unrealistic. However, the end of net purchases is only the beginning of a multi-year process of monetary normalisation. That's why it's so important to actually start soon,” Wiedmann told an audiance in Vienna on March 26.

The Euro rose on the comments, confirming the market impact such hawkish views hold.

"The Euro is likely to take a hit if hawkish Bundesbank chief Jens Weidmann is not picked to succeed Mario Draghi as European Central Bank president," says Robert Howard who sits on the Thomson Reuters currency desk.

Since rising interest rates are the primary driver of a stronger currency, due to their draw on foreign capital, his election would probably mean a stronger Euro.

At the moment Weidmann is widely considered the frontrunner for the job. 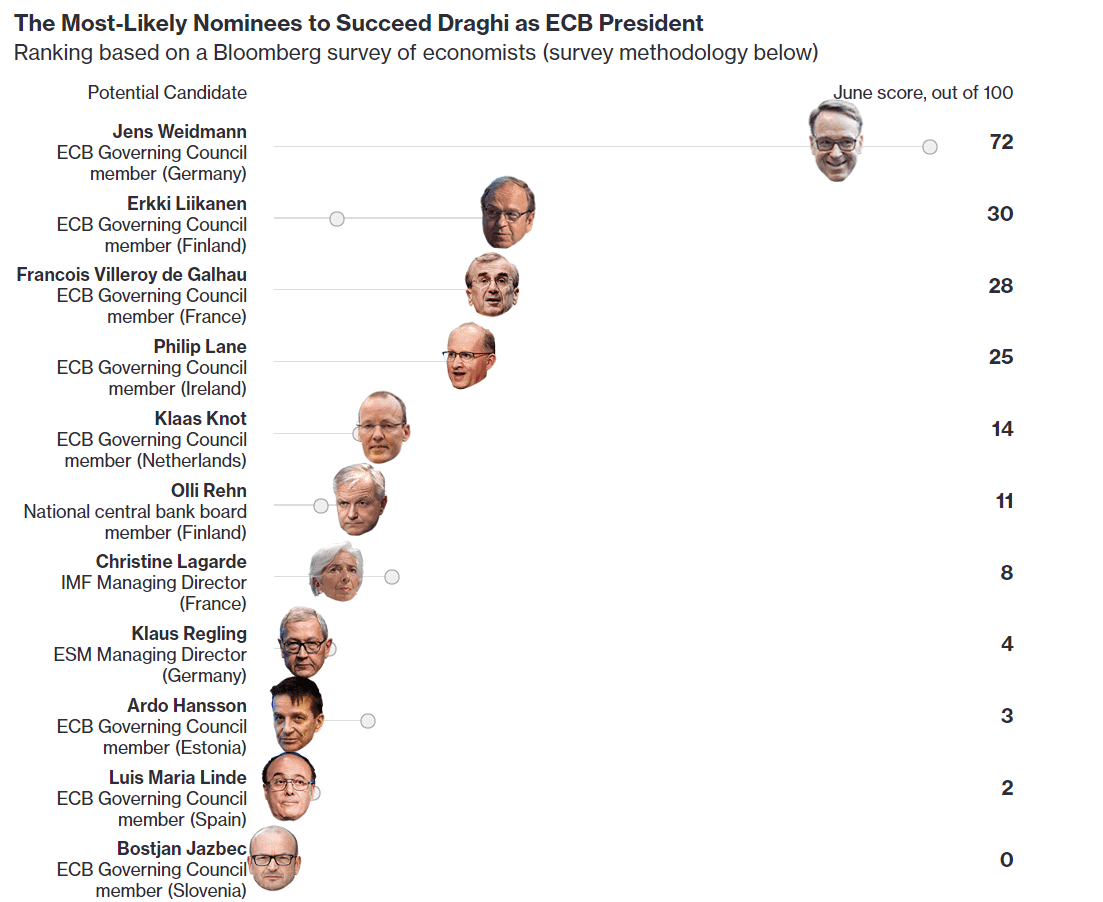 "The favourite is the Bundesbank President Jens Weidmann," says Nick Kounis, an analyst with ABN AMRO. "He is one of the most hawkish members of the Governing Council and has opposed many of the central bank’s decisions over recent years."

Weidmann's nationality favours him because a German has never held the highest office in European finance and many think it is high time one did.

There have only been three ECB presidents so far. The first was a Dutchman Wim Duisenberg, the second the Frenchman Jean-Claude Trichet and Draghi is Italian. Given Germany is the largest economy in Europe it would seem a little strange for a German not to be named.

"He’s (Weidmann's) taken a hard line against loose monetary policy, earning him respect at home but criticism from Draghi for his perceived “nein zu allem” - no to everything - attitude. That may count against him if other nations fear he’ll be too hasty in shutting off the money taps. In his favour: Germany has never held the presidency despite being the region’s biggest economy," says Bloomberg in a report published back in February which featured a poll (updated in June) that placed him well out in front of the opposition.

Of course nationality should not come into it and the choice of candidate should be based on merit alone - a point Weidmann himself has made - yet most commentators and common sense would suggest otherwise.

The main factor going against Weidmann as a choice is he is seen as an extremist with policies that are lie on the very hawkish extreme of the monetary policy scale.
"The favourite is the Bundesbank President Jens Weidmann, but we continue to think that he is too polarising a figure to be selected for the job," says Kounis.

Indeed recently he has come under attack from the new far-right populist government in Italy who want to loosen reins on spending so they can full-fill their generous spending promises and would be averse to a prudent teutonic head of the ECB.

On Thursday, eurosceptic economist Claudio Borghi told Reuters that Weidmann would not be a good choice for Italy.

"Borghi is a top official in Lega, which governs Italy in coalition with the 5-Star Movement. Weidmann has not been officially put forward to succeed Draghi on November 1, 2019, but is widely considered the most obvious candidate. Earlier this month, Weidmann said the next head of the ECB must be someone who can tighten monetary policy," says Howard.

If not Weidmann then Who?

Yet to a certain extent almost all the other contenders have something 'wrong' with them.

Luis de Guinidos was only just made vice-president in April and is unlikely to be promoted to the top job so rapidly. In addition, he is a southern European like Draghi, and as ABN AMRO says, "another southern European at the helm looks unlikely."

The other main contender is Erkki Liikanen, who came second in the Bloomber poll and remains a credible choice by many, however, he is seen as too dovish and his election would likely be heavily contested by the more hawkish Germans and Dutch.

France's de Galhau is also credible but the problem here is his nationality since the previous ECB president was Jean-Claude Trichet, and also was French. In his advantage he is from Alsace and speaks fluent German. France also bridges the north and south.

"He has the advantage of being from a large economy seen as having a foot in both the northern and southern camps, and he speaks German. A disadvantage is that France has already held the presidency, under Trichet. Villeroy de Galhau has played down, but not ruled out, the prospect of becoming ECB chief," says the Irish Times.

Bank of Ireland governor Philip Lane is seen as a contender because of his first class academic credentials: he was a former professor of economics and Harvard alumni. Yet he has also been widely tipped to take over from outgoing Peter Praet, the chief economist at the ECB, since Ireland has still not yet held a post in the ECB executive and it is considered high time it did.

Finally, the most recent name to have been thrown in the hat is that of Benoit Coeure, the current head of market operations on the ECB executive. His advantages are seen as his centrist, uniting stance and his wide-ranging experience.

"So there is currently no obvious candidate to be ECB President.  Or so we thought. One of the most able officials on the Governing Council is Benoit Coeure. He has primary responsibility for Market Operations at the ECB and has far-reaching experience in government and international fora," says Kounis at ABN AMRO, who touts Coeure as the perfect centrist candidate.

Yet there is one problem with Coeure and that is that technically he cannot stand because he is already a board member.

He has already served a nearly 8-year term and it is against the rules for him to exceed his 8-year maximum tenure.

Yet, according to a recent article in the Wall Street Journal this technicality could be easily overcome "as long as Mr Coeure stepped down from his current post before the decision-making process started," says ABN AMRO.

This is not the only obstacle Coeure is likely to face he wants the top job either.

His nationality too would count against him, being French, as it does in the case of Francois Villeroy de Galhau.