The Euro to Dollar exchange rate entered the new week near eight-month highs but with technical resistance and multiple macroeconomic event risks lurking on the path ahead the single currency could struggle to extend its recovery much further over the coming days.

Europe's single currency climbed to some of its strongest levels against the Dollar since April 2021 last week but it opened Monday's Asia trading session facing immediate obstruction overhead on charts in the form of technical resistance around 1.0842 and 1.0945 further up.

The Euro benefited as Dollars were sold widely including after official figures revealed a third successive decline in U.S. inflation that could mark the beginning of the end for the Federal Reserve (Fed) and its battle to return the annual pace of price growth to the 2% target.

"European data was thin and was overshadowed by ECB council members’ comments in support of further increases in rates, as telegraphed at the last meeting," says Kenneth Broux, a strategist at Societe Generale.

"Buying takes a breather with spot at the highest level since last April and near overbought territory," he adds in a Friday market commentary. 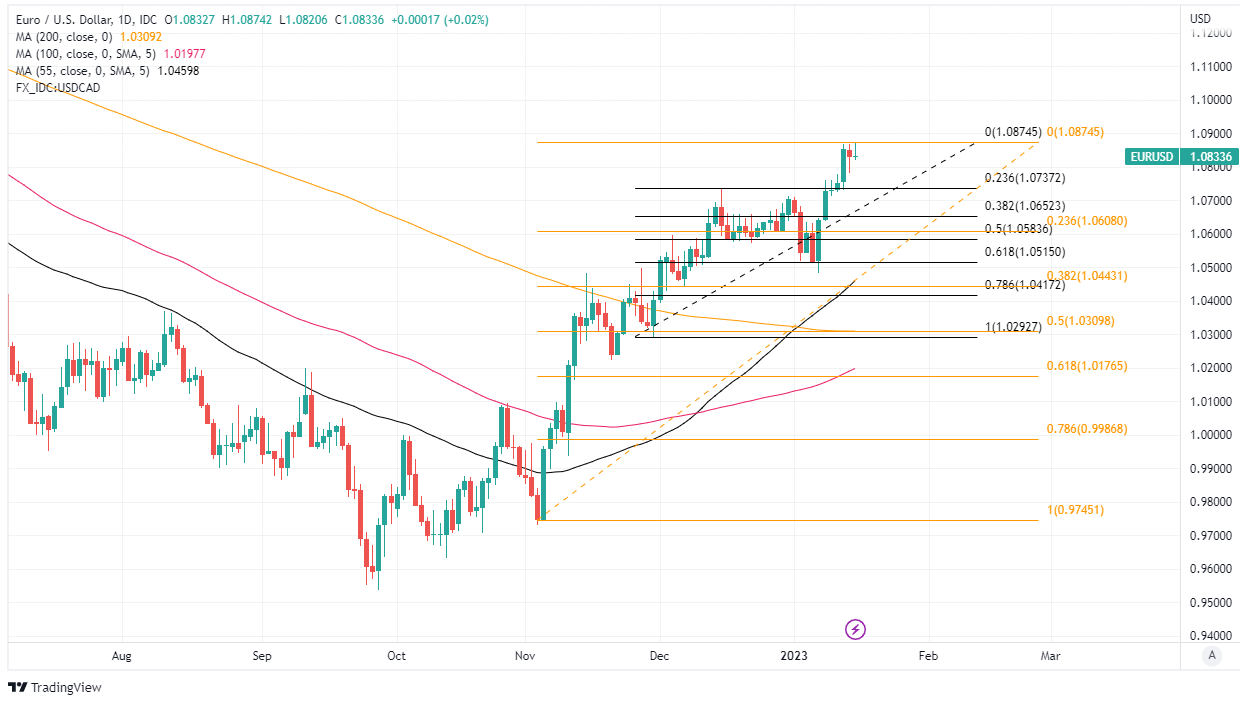 Noteworthy European economic figures remain in short supply but the single currency could be responsive this week to GDP data emerging from China, a keenly anticipated monetary policy decision from the Bank of Japan (BoJ) and speeches from European Central Bank (ECB) Christine Lagarde.

"The large fall in US 2 year yields has sharply pushed up the Eurozone minus US bond spread and supported EUR/USD (chart 3). We expect more policy rate cuts by the FOMC than is currently priced, implying more upside to the bond spread in favour of EUR/USD," Capurso and colleagues add.

Capurso and colleagues cite an anticipated deterioration of U.S. economic data and market expectations of Federal Reserve (Fed) interest rate cuts later this year for thinking the Euro-Dollar rate can rise further and as far as 1.1033 over the coming weeks.

U.S. rate setters might continue to disagree with market assumptions about interest rate cuts, however, and to the extent that they do there could be downside risks for the Euro and other currencies relative to the Dollar as January gives way to February and the next Fed policy decision is announced. 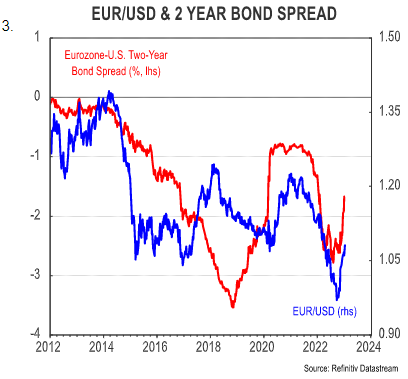 This would be especially the case if bets on rate cuts coming from the Fed and the resulting declines in U.S. government bond yields lead the Federal Open Market Committee to elect in favour of doing more quantitative tightening at their next meeting around the turn of the month.

But Tuesday's Chinese economic figures and Wednesday's BoJ policy decision are potentially likely to hold greater sway over the single currency in the days ahead while Thursday and Friday speeches from ECB President Christine Lagarde will also likely garner attention from the market.

Meanwhile, declines in commodity prices, unseasonably warm weather and resilient performance from the German economy could be likely to limit any downside in the event of a corrective setback for the Euro to Dollar rate.

"We have argued that Euro upside is capped because commodity constraints will limit Europe’s ability to benefit from stronger foreign demand and that the ECB would struggle to support the Euro because aggressive rate hikes into a recession risk reigniting sovereign credit concerns. However, after a mild winter, those commodity constraints now look significantly less binding," says Michael Cahill, a G10 FX strategist at Goldman Sachs.

"As a result, our economists no longer expect a Euro area recession this year. Importantly, this puts the economy (and currency) in a better position to absorb a more hawkish ECB outlook. In short, commodities are still driving the Euro area outlook, but that paints a much brighter picture now so that we are mostly looking back on the “winter that wasn’t,” Cahill writes in a Friday briefing. 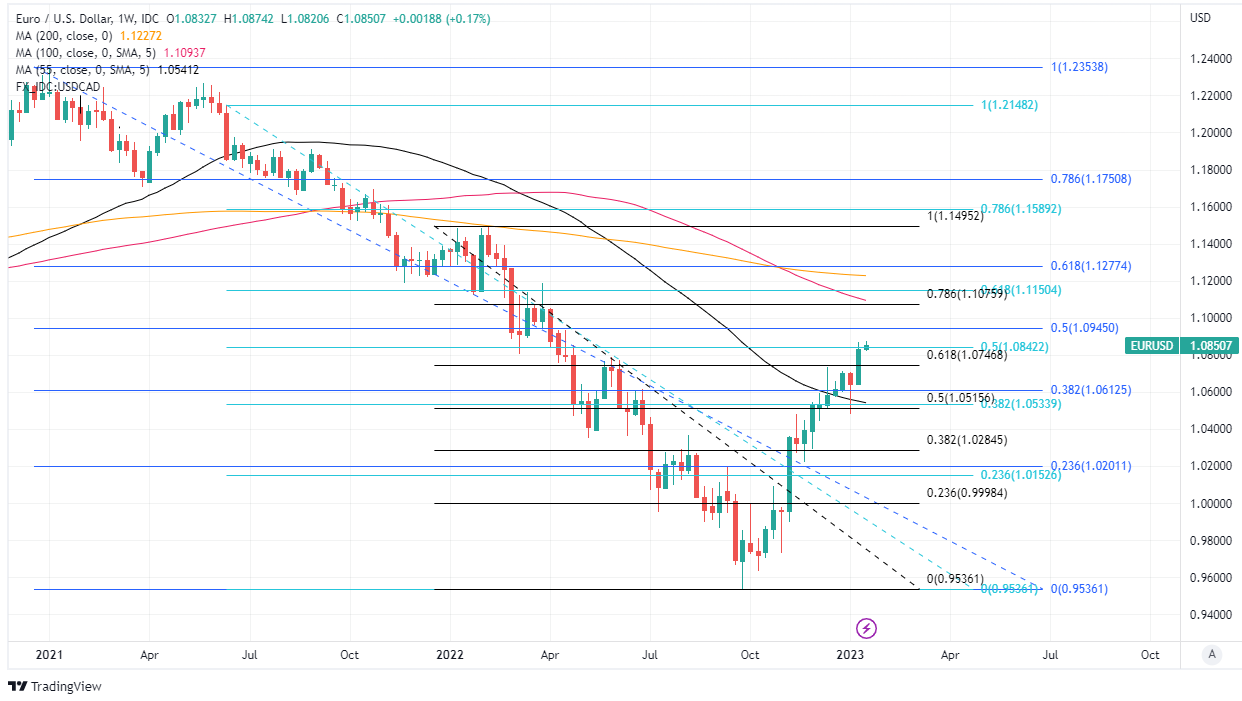 Above: Euro to Dollar rate shown at weekly intervals with Fibonacci retracements of February 2022, June 2021 and January 2021 declines indicating possible areas of technical resistance for the single currency. Click image for closer inspection. If you are looking to protect or boost your international payment budget you could consider securing today's rate for use in the future, or set an order for your ideal rate when it is achieved, more information can be found here.