Strategists at investment bank Nomura have raised their conviction on a bet the Euro to Dollar exchange rate (EUR/USD) is on course for a few 'big figure' moves below parity.

EUR/USD dipped below 1.0 on August 22 amidst spiralling Eurozone energy prices which come amidst fears Russia will continue to squeeze gas supplies to Europe.

"The recent range bound price action of EUR in late July/August is now over – parity breached once again but this time lacking the extended amount of short positioning that eventually pulled it back to 1.03," says Nomura strategist Jordan Rochester. 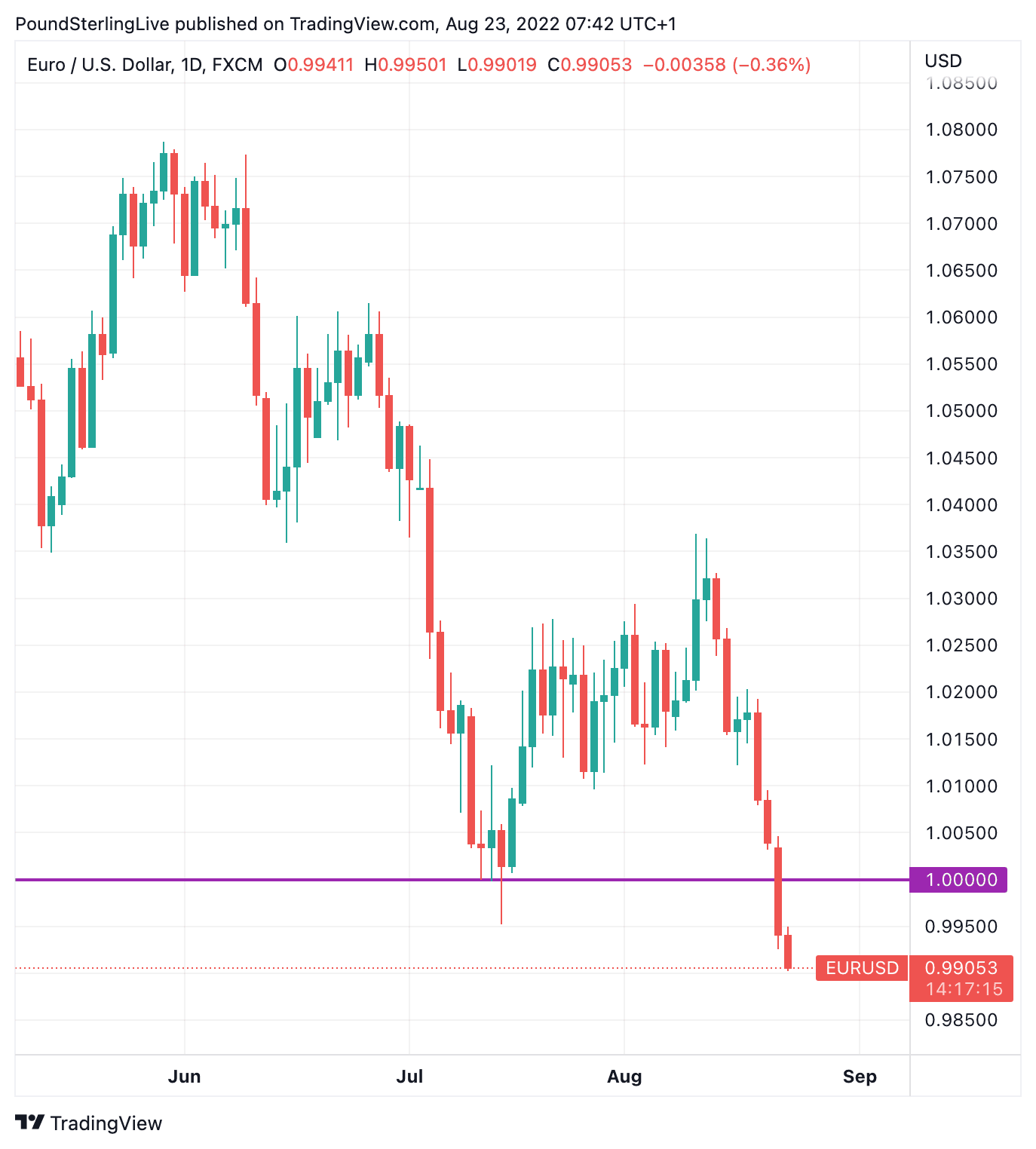 Above: EUR/USD at daily intervals showing a recent move below 1.0. Set your FX rate alert here to be informed on whether your desired levels get reached.

Euro exchange rates were under pressure at the start of the new week after the European gas benchmark Dutch TTF rose to €295 per MWh, forcing electricity supply contracts in Germany and France to new records.

Prices rose sharply after Russia said late Friday its Nord Stream pipeline that transfers gas to Germany will be shut for three days of maintenance on August 31.

Holger Schmieding, Chief Economist at Berenberg Bank, says the decision is a political one.

"In an apparent attempt to exploit Europe’s dependence on Russian gas, Gazprom announced last Friday that it will close the Nord Stream 1 pipeline (NS1) for an unscheduled three-day 'maintenance' on 31 August," he says in a note out Monday.

Gazprom's decision to halt supplies comes amidst a bidding frenzy for gas as European countries attempt to fill their storage facilities ahead of the winter.

Economists are widely of the view the Eurozone is now entering recession as a result of soaring energy costs.

"Despite the 50% move higher in energy costs in August, EUR has been extremely range-bound, but we don’t think this will last," says Rochester.

The Euro stabilised during July and into August as the mid-July dip prompted some buying interest that took it back to 1.03.

The move cleared out significant amounts of bets against the Euro as profits were booked or closed out.

"There has been a significant clean out of EUR shorts since parity was reached," says Nomura.

He says European governments are starting to share higher energy costs with consumers, and firms will have to start slowly curtailing production, while supply lines are being hit by a lack of transport options on the lower water levels on the river Rhine.

"The market could also start to price in a softer landing in the US, with PMIs next week in focus — if we get a bounce back, like we saw in the Philadelphia Fed survey it could keep EUR under pressure too," he adds.

Nomura's strategists are targeting a move lower to 0.9750.

They raise their conviction to 4/5.