The Euro to Dollar exchange rate (EUR/USD) is likely going higher say currency strategists at Morgan Stanley who this week initiate a buy recommendation on the pair.

The call comes just days ahead of a crucial European Central Bank meeting (ECB) at which policy makers are tipped to signal the start of an interest rate hiking cycle.

Based on recent communications from various Governing Council members - most notably President Christine Lagarde herself - interest rates are likely to be raised for the first time in July and then again in September.

"The upcoming ECB meeting may prove a key EUR-positive catalyst. We think the time has come to buy EUR/USD," says strategist David S. Adams at Morgan Stanley in New York.

Morgan Stanley says surging Eurozone inflation will be causing concern at the ECB to the extent that the pace of upcoming rate hikes could be faster than what's priced in by financial markets. 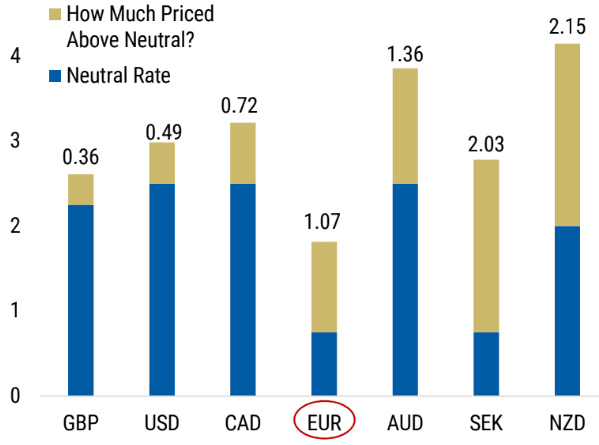 "Markets are pricing about 100bp of additional tightening in Europe, compared to more than 200bp from Sweden and New Zealand. The more that ECB rhetoric appears to imply greater concern about inflation pressures being insufficiently under control, the more likely it is that this terminal rate pricing increases," says Adams.

The call to buy the Euro against the U.S. Dollar comes at a time of recovery for the exchange rate which reached a multi-year low of 1.0349 on May 13 and numerous analysts were suggesting a fall to parity and below was likely. 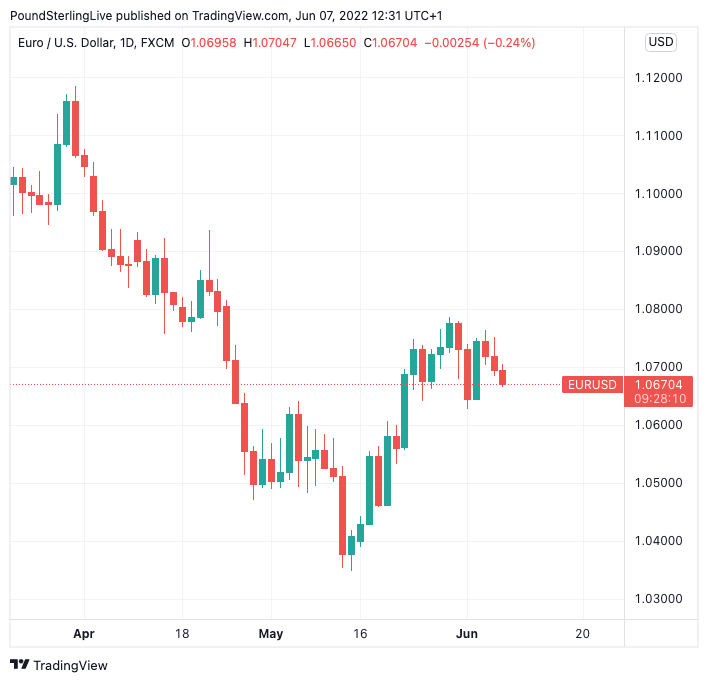 Above: EUR/USD at daily intervals.

However, aided in part by the ECB's clear communication that interest rates must start rising, Euro-Dollar has recovered to post a high at 1.0787 by May 30.

June has however seen the pair enter a period of consolidation between 1.06 and 1.0787.

But for Euro-Dollar to move materially beyond 1.10 Morgan Stanley's analysts say the U.S. Dollar must weaken, and for this to happen global growth must start recovering meaningfully.

"For the USD to turn around, investors would need to see the balance of risks on global growth as skewed higher, not lower," says Adams.

For this to happen Chinese growth must start recovering following the recent Covid lockdowns and the Federal Reserve must start to ease back on its rate hiking agenda as it becomes increasingly concerned about slowing U.S. economic growth.

"Our current bull case for EUR/USD is 1.14. A state of the world where global data expectations are bottoming, the Fed's pace of normalisation is slowing, and European data hold relatively firm (supporting the ECB's normalisation track) is one in 1.14 is increasingly achievable. How long this takes, though, is a key question," says Adams. (Set your FX rate alert here).

Foreign exchange strategists at Goldman Sachs meanwhile say they are minded to maintain a positive medium-term forecast profile for the Euro relative to the Dollar, seeing it leaping 1.10 over coming months.

The Wall Street bank is however not yet willing to make a buy recommendation, primarily because the Ukraine war remains a tail risk to their assumptions for a recovery in the Euro.

The call comes as the Euro to Dollar exchange rate recovers from its early May floor at 1.0349, leading to speculation that the bottom might have been reached.

"Could we be setting up for a continued rebound in the single currency?" asks Zach Pandl, Co-head of FX Strategy at Goldman Sachs. "This is a possibility in certain scenarios."

For a meaningful rebound to transpire the U.S. economy must slow faster than that of the Eurozone.

This flow is expected by Goldman Sachs to "support the single currency over time".