Foreign exchange markets have entered into what can be best described as a resting state ahead of the Federal Reserve (Fed) decision due at 19:00 BST, with traders seemingly unwilling to take any sizeable decisions until after the event.

The Euro-to-Dollar exchange rate (EUR/USD) is seen at 1.2122 in mid-week trade but could rise by half a percent in the event of a 'dovish' outcome say strategists at TD Securities, the Canada based global lender and investment bank.

However, the base-case scenario anticipated by TD Securities is that the Fed strikes a "slightly less dovish than in April."

In a briefing note to clients they say they expect the Federal Open Market Committee (FOMC) to have begun discussing how and when they will reduce the size of the Fed's quantitative easing (QE) programme, but this would be dependent on the progress of the economic recovery.

Indeed, any such 'tapering' would ultimately require "much more progress" according to TD Securities.

Of particular interest to investors will be the FOMC's dot graph, which will show where each member of the committee sees interest rates over coming months and years. 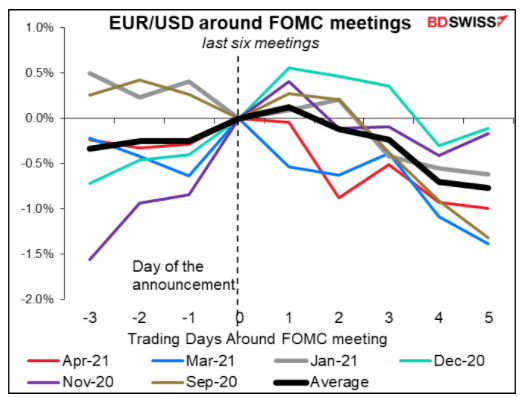 Under such a scenario TD Securities forecast the Euro-Dollar rate to edge lower by a quarter of a percent, ensuring the current rangebound nature of trade in this currency pair ultimately extends.

They ascribe a 65% chance this outcome will come to pass.

A 'hawkish' outcome that would see the Dollar rise and push the Euro-Dollar lower is given a 20% probability.

Here the FOMC would say that "progress" toward their goals of boosting the economy is being made, including a view that upside risks on inflation are noted.

This outcome would also likely involve a "sizeable majority of officials" expecting a rate hike by the end of 2023.

Under such a scenario the Euro-Dollar rate is forecast to dip by up to 1.0%.

But a 'dovish' scenario would potentially see a rise in Euro-Dollar of around 0.50% says TD Securities.

Here, the FOMC would ultimately maintain April's statement, including their guidance on QE.

Inflation projections would be seen hiked for 2021 but unchanged in 2022/23, consistent with 2021 strength being entirely "transitory" says O'Sullivan.

Importantly the median dot chart would still shows no rate hike through to the end of 2023.

Such an outcome is however given a lowly 0.15% probability.