The Euro has advanced against a broadly weaker U.S Dollar over the course of the past 24 hours, with analysts saying the door is ajar to a fresh test of the 2021 high.

The best exchange rate for Dollar buyers in 2021 came off the back of the spot market's January 05 peak at 1.2349; the pair rose to a high of 1.2150 in the hours following Wednesday's Federal Reserve (Fed) monetary policy update.

The Fed quashed speculation about reducing its asset purchase programme (tapering), arguing that employment was still far too short of where the Fed would like.

The Fed will require a string of strong employment reports before it considers easing back on the support it is providing the economy. 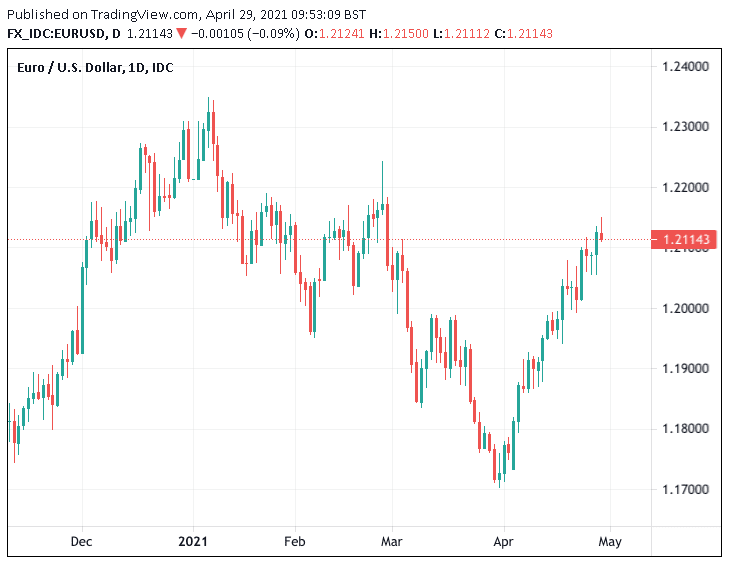 The economy has shed over 8m jobs since the pandemic began while the Fed is buying up $120BN worth of bonds per month.

This dedication to targeting higher employment is anticipated by markets to result in steady U.S. bond yields, which in turn denies the Dollar of upside support.

"The Dollar followed yields lower, breaking through 1.21 versus the Euro for the first time since February," says Charles Porter, analyst at SGM Foreign Exchange Ltd.

Some foreign exchange analysts are saying the door is open to further advances in the Euro now the Fed has passed without incident.

"EUR/USD has capitalised off the dollar's weakness, the currency pair had fallen to $1.2058 ahead of the Fed’s announcement but currently trades back above the $1.21 handle. We could see the year high of $1.2349 test again over the short term," says Adam Ma, a foreign exchange analyst at Western Union.

The Euro had been falling against the Dollar since the start of the year and until the end of March.

However, the turn of the month saw an about-turn in the EUR/USD's direction with the pair turning up once more.

A steady trend higher has resulted in a multi-week high of 1.2150 being achieved on Thursday.

Kit Juckes, a currency analyst at Société Générale says for the Euro, "the key may still lie in Bund yields."

"I am less concerned about the treasury/Bund yield difference here, than the Bund yield itself. If that is rising, reflecting improving economic confidence on this side of the Atlantic too, then the euro uptrend should persist. EUR/USD 1.2050 looks like important support now, and if that holds we're on track for new cycle highs," he says.