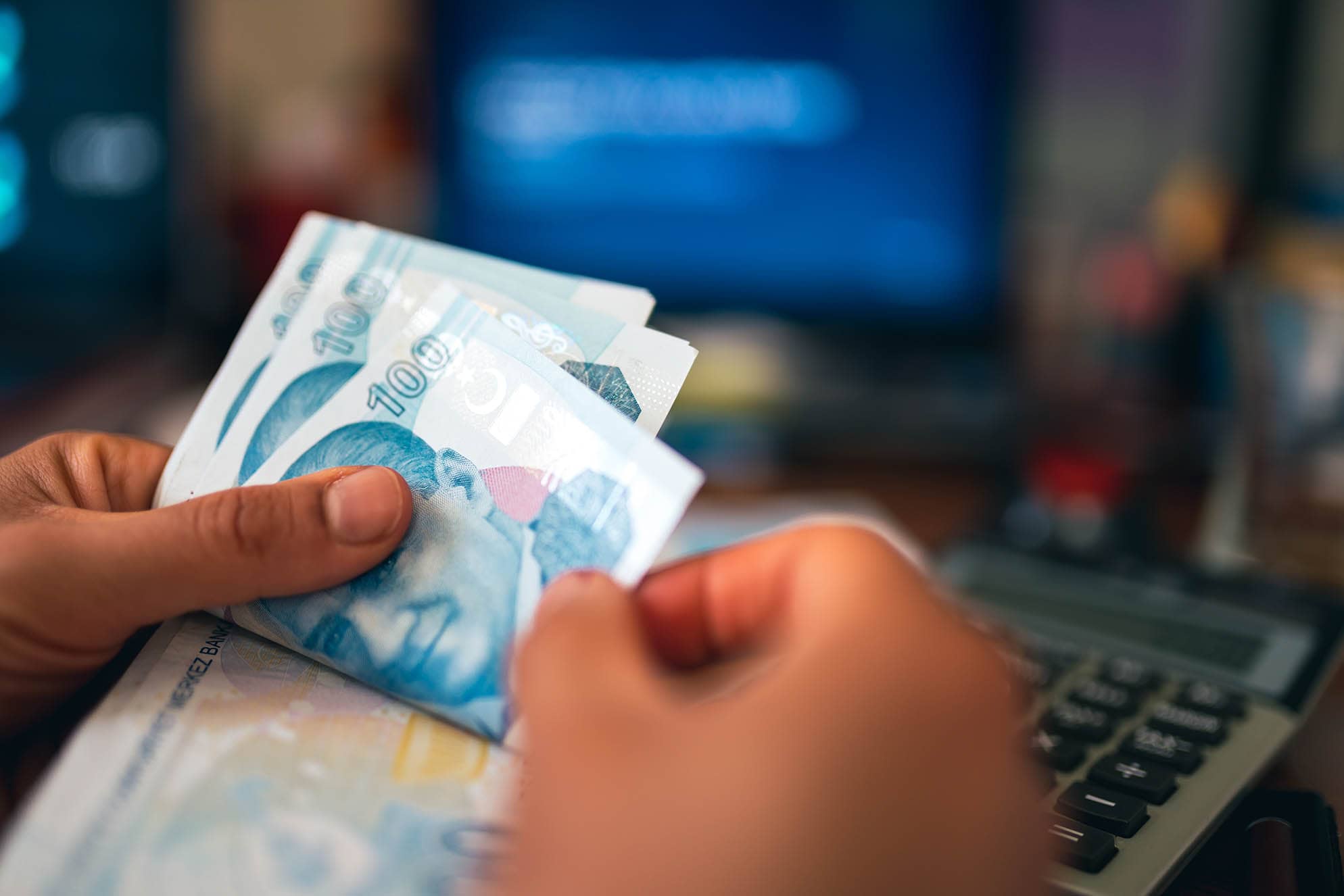 The Turkish Lira outperformed developed and emerging market counterparts on Tuesday despite widespread U.S. Dollar strength and could now be on the cusp of a more durable turnaround against the both the greenback and European single currency, according to technical analysts at Commerzbank.

Turkey’s Lira rose strongly against the Dollar, Euro, Pound and all other major developed and emerging world rivals even as U.S. exchange rates edged higher a day out from the all-important April monetary policy decision of the Federal Reserve (Fed).

The Turkish currency has rallied off of all-time lows this week and despite ongoing headwinds resulting from global market concerns about the trajectory of Turkish interest rates, leaving in its wake on the charts what is effectively a warning sign of a possibly pending trend reversal.

“The Euro is looking stronger, it appears to be building a bull flag on EUR/CHF and is breaking through a downtrend vs. CNH, however we would tighten stops vs TRY as we have a 13 count on the daily chart,” says Karen Jones, head of technical analysis for currencies, commodities and bonds at Commerzbank. 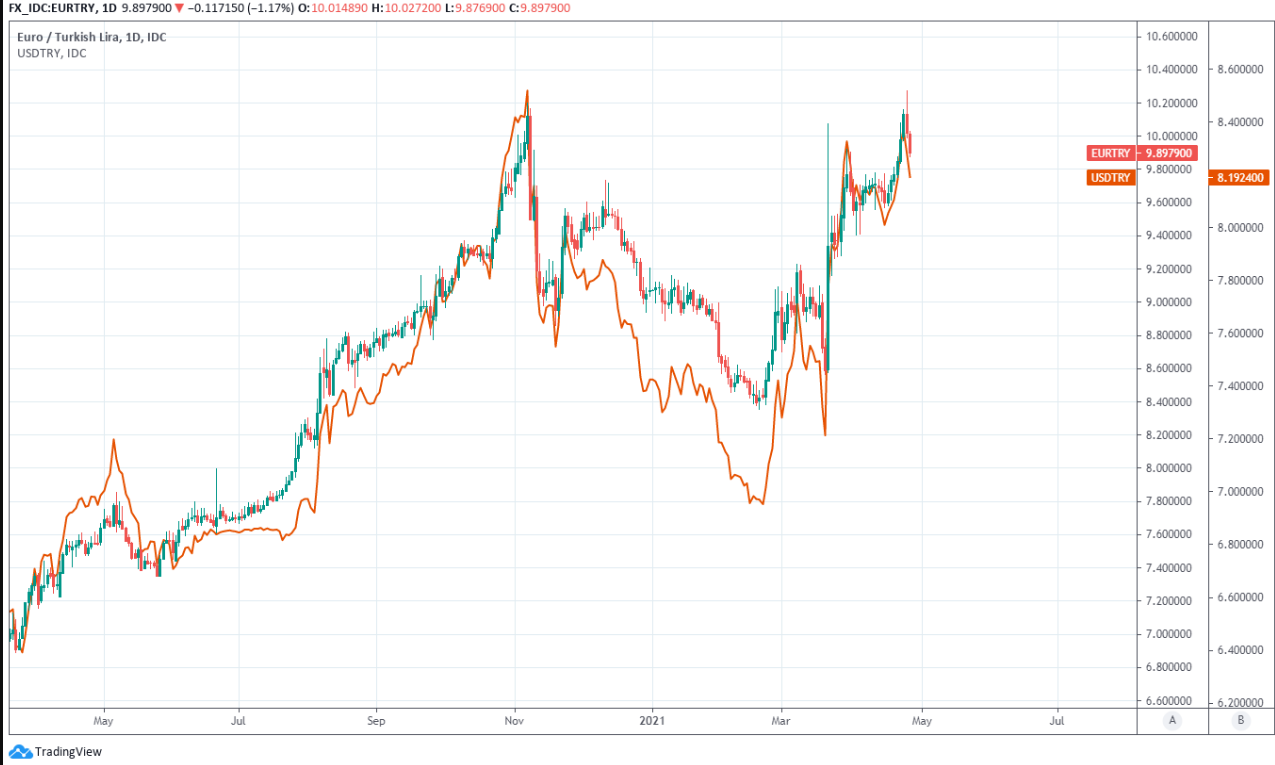 Above: EUR/TRY shown at daily intervals with USD/TRY (orange).

USD/TRY and EUR/TRY have been moving in tandem with each other ever since late March when Naci Ağbal, then-Governor of the Central Bank of the Republic of Turkey (CBRT), was fired and replaced by a former lawmaker of the ruling AKP Party in Sahap Kavcioglu.

While leaving Turkey’s benchmark interest rate at a cripplingly high 19% following the bank’s first monetary policy meeting with Kavcioglu as head of the bank, the new governor has signalled that policymakers in Ankara do not intend to lift interest rates any further in order to bring down inflation.

“The cross may well stop rising around the 10.3000 target. In addition there is a daily Tom DeMark 13 combo count at 10.3098 which is also toppish,” Jones says, referring to EUR/TRY.

Jones and the Commerzbank team say there’s a chance that EUR/TRY could fall as far as 9.84 in any correction from its current all-time highs, a prospect that may become more likely if investors remain as enthusiastic about emerging market currencies as they have been recently. 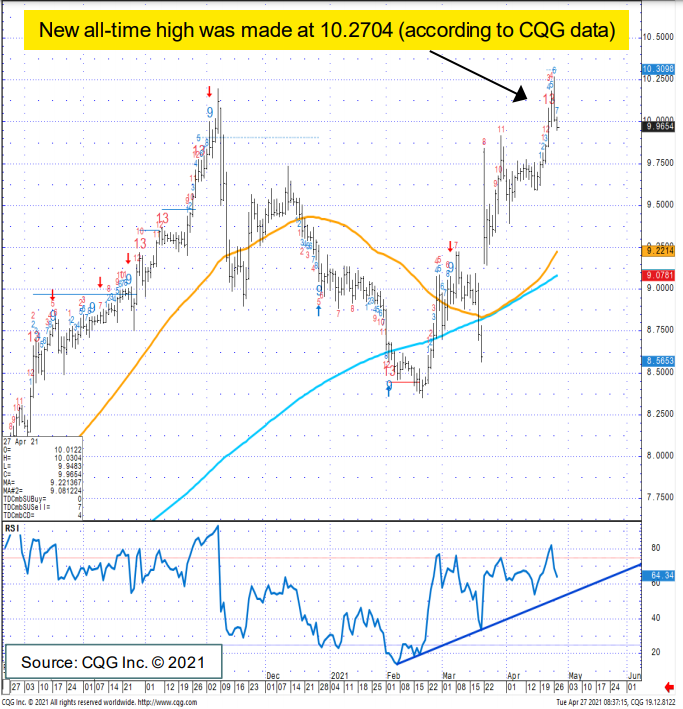 "Medium-term upside pressure should be maintained while the currency pair trades above the last reaction low at the 9.5913 mid-April low," Jones says.

The U.S. Dollar has declined broadly in recent weeks while many emerging market currencies have risen strongly, which may have played a role in limiting the Turkish Lira’s losses, while this Wednesday’s Fed policy decision provides scope for the Dollar fall to continue.

U.S. rate setters have insisted repeatedly that they intend to keep interest rates near to zero even as the recovering U.S. economy lifts inflation above the bank’s two percent target, which would eat into the limited returns offered to investors who hold the Dollar and U.S. government bonds.

That monetary policy calibration, when combined with a robust U.S. economic outlook, bodes well for the global growth recovery that is expected to gather steam this year and implies improving prospects for global asset prices which may also help weigh on the Dollar over the coming months.

The Lira however might be seen drawing only a limited benefit from any further Dollar downturn this year because of market fears that interest rates could soon be cut in Turkey, despite inflation of 16% in March, which is more than three times the 5% target level. 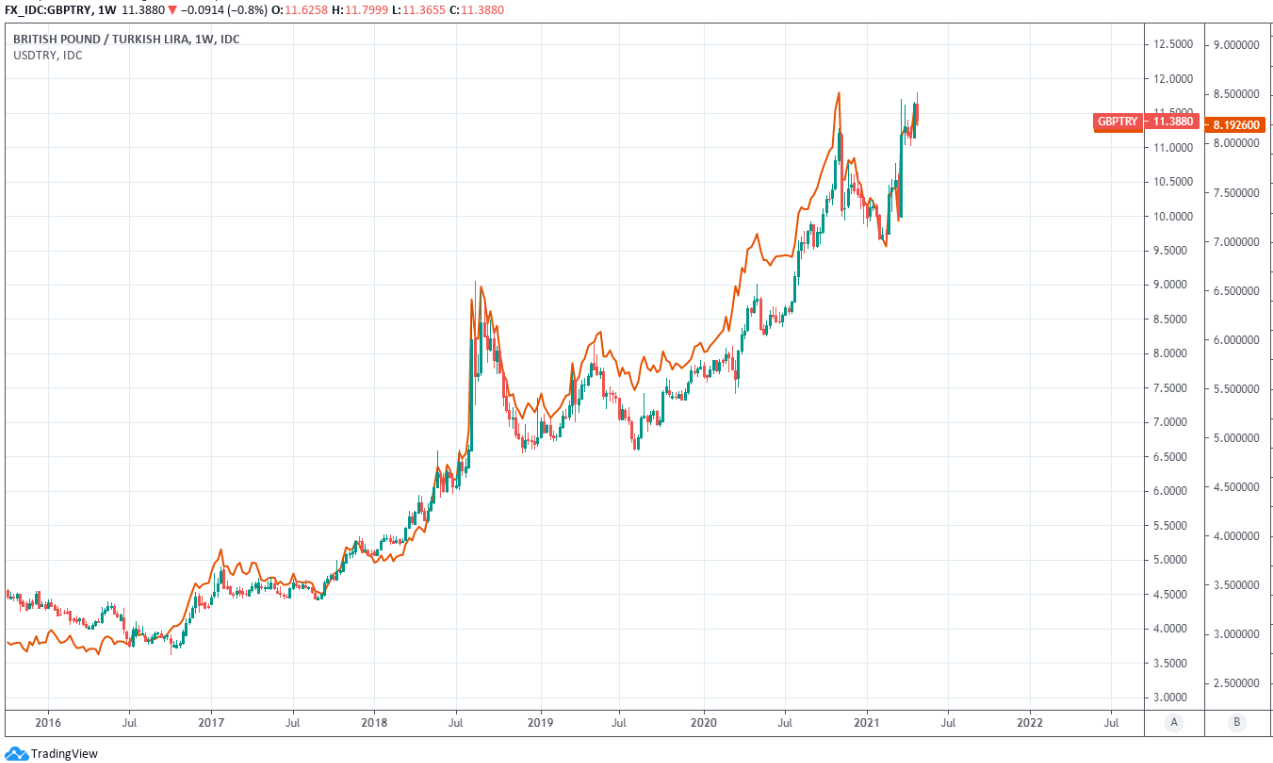 Above: GBP/TRY shown at weekly intervals.

"The CBRT has signalled clearly that they are no longer willing to raise rates further to dampen upside inflation risks, and are likely waiting for an opportunity to begin lowering rates. The developments still suggest to us that recent TRY gains are built on shaky foundations,” says Lee Hardman, a currency analyst at MUFG, in a recent note.

Nascent concerns about the outlook for interest rates are just the latest instalment in a triangular struggle between Turkish policymakers on the one hand, Turkish political leaders with their unorthodox views on monetary policy on another, and international investors with their conventional demands for interest returns on cash assets loaned to the Turkish state.

Central banks typically use interest rates and other monetary policy tools to control inflation with higher rates deployed to curb rising price pressures while lower borrowing costs are used to cultivate inflation wherever it's found undershooting a predefined target.

President Recep Tayip Erdogan has never thought much of inflation-targeting however, and has frequently argued that many other central banks in the world are effectively doing it all wrong.

Erdogan's idea is that higher interest rates cause higher inflation and vice versa, which is exactly the purported view of Ağbal's replacement in the form of Sahap Kavcioglu, a former lawmaker of the governing party who's said to have frequently criticised increases in Turkish interest rates.

Pound-Euro Week Ahead Forecast: Buoyant but Struggling Above 1.17 as BoE and PMI…