The benefit of technical analysis is it does however capture trends and momentum while eliminating the often confusing background noise coming from the data, news and other fundamental macro sources.

These can often cloud the assessment of a currency's behaviour and likely trajectory, giving an advantage to the rule-based approach of technical analysis.

Jones says the US Dollar Index never sustained a close below 90.00, and this creates a "messy" picture: 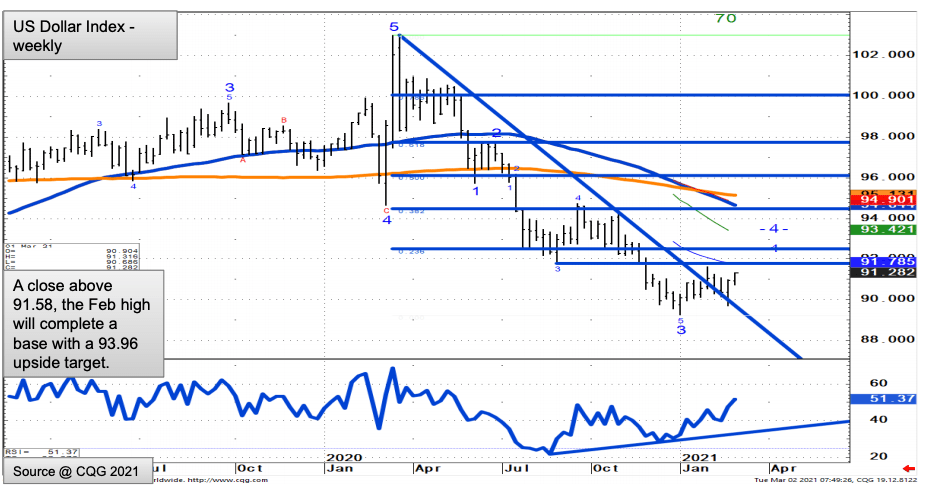 The Dollar has been the best performing major currency of the past week, a development aided by a rise in U.S. yields, particularly the yield on ten-year bonds.

Therefore, what happens to yields could matter for the Dollar.

"Following the big blow out in bond yields last week, the question we need to ask is – was this the final nail in the yields bull move? Unbelievably no, we do not think that it was! However, a more accurate answer would be – not yet!" Says Jones.

Jones says bond yields in general are building what can only be described as major bases and these are going to complete shortly.

The technical picture set out by Jones is at odds with what the majority of foreign exchange analysts are expecting from the Dollar in 2021.

As noted in this report, the majority of the analyst community are still forecasting a weaker Dollar in 2021 as the global economy enters a strong growth phase and creates the conditions that typically trigger Dollar weakness.