Euro exchange rates were all higher ahead of the weekend, leading the Euro to turn from a laggard to an outperformer among major currencies and in few other places was this improved fortune more obvious than in the Euro-to-Pound exchange rate which reversed sharply to the upside on Friday.

A more resilient performance from the Eurozone services sector in January's PMI surveys from IHS Markit put the Euro on its front foot from the beginning on Friday, leading the single currency to climb even as previously rip-roaring stock markets came undone ahead of the weekend.

"The external environment does not look right for a strong EUR/USD advance though, where the dollar/Asia bear trend has stalled and Italian politics could yet deliver a sting," says Petr Krpata, chief EMEA strategist for currencies and interest rates at ING. "Developments in the US capital will likely drive the dollar next week. Signs that Biden’s fiscal bill will struggle in the Senate may pour cold water on risk sentiment despite an FOMC message that is likely to remain dovish."

Britiain's services PMI fell back to its lowest level in January since May last year and the middle of the country's first 'lockdown,' with the New Year's reading coming in a 38.7 after falling more than than 10 points. Meanwhile, the equivalent Eurozone barometer dipped little more than one point to be left at 45.0. 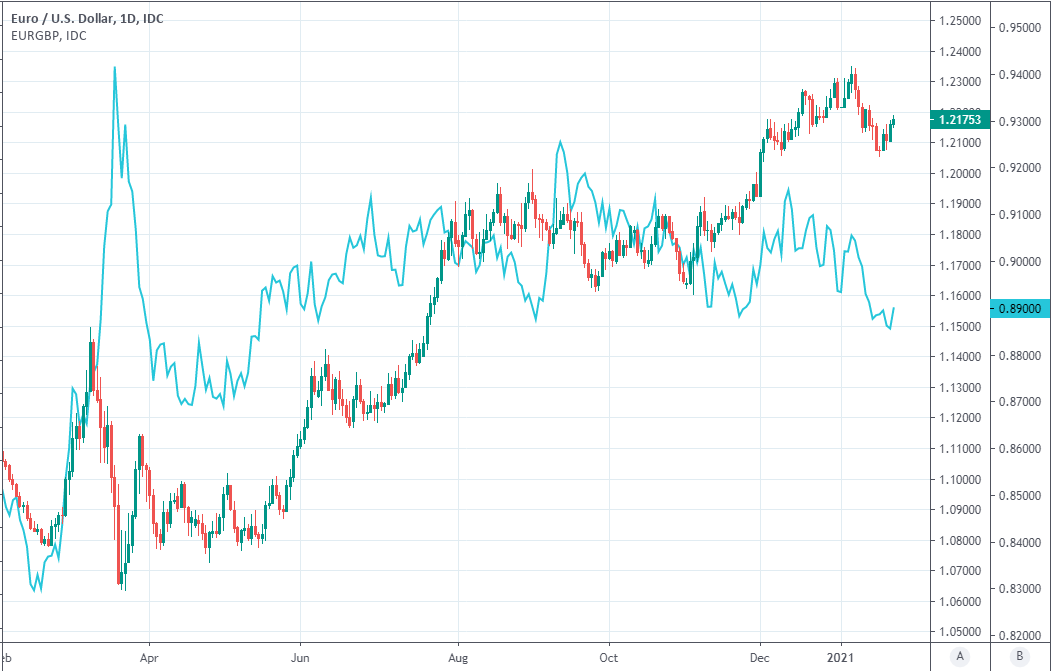 Above: Euro-to-Dollar rate shown at daily intervals alongside EUR/GBP (blue).

"The pound may not have been keeping pace with the gains in the commodities currencies in the year to date but it was managing to outperform both the USD and the EUR. Already, however, the GBP rally has been thrown off course by bad economic news. Insofar as the pandemic still has a long way to run and the fall-out from Brexit has yet to settle, it is likely that the coming months will remain choppy for GBP," says Jane Foley, a senior FX strategist at Rabobank.

Sterling's fortune cookie crumbled just as the Euro was enjoying a reprieve from European Central Bank (ECB) induced caution after President Christine Lagarde was perceived on Thursday as being less 'dovish' about the Eurozone outlook than may have been warranted.

Lagarde said the ECB may not use the entire envelope of money allocated to its pandemic-inspired quantitative easing programme when communicating a policy decision that may have been little more than politically motivated sop to 'hawks' on the bank's Governing Council.

The single currency overlooked reports suggesting the delivery of coronavirus vaccines from the Anglo-Swedish Astrazeneca will now be delayed, the latest in a series of setbacks for Europe's vaccination effort after upgrades to a Belgium-based factory already delayed delivery of the Pfizer and BioNtech vaccine. Delays came after an earlier EU decision to wait and reserve a portion of European demand in anticipation of the full development and approval of a vaccine from France's Sanofi. 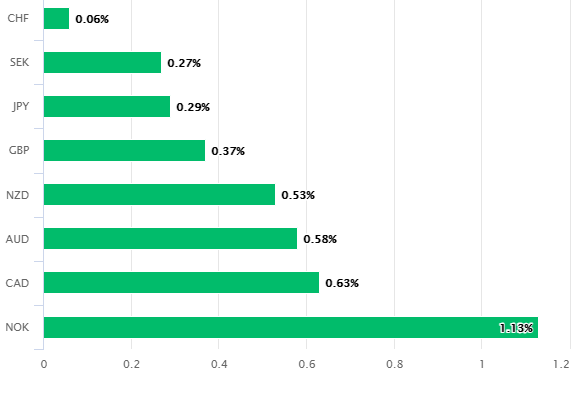 "The EUR has taken solace that the deterioration in business activity during January was relatively modest and no worse than expected," says Daragh Maher, Americas head of FX strategy at HSBC. "The EUR’s resilience this morning means the DXY index is not exhibiting the kind of boost one might have expected alongside the marked decline in equities. Perhaps also, although arguably any deterioration in risk appetite might hit equities harder if valuations are viewed as stretched, valuations are less of an issue for FX. Still, it is clear that much of “risk on” FX is on the defensive amid concerns about COVID-19 and dampened hopes for any immediate bipartisan US fiscal boost."

Most notably on Friday; the U.S. Dollar was seen hard on the heels of a rallying Euro even after 'real yields' - that is to say bond yields adjusted for investors' inflation expectations - plumbed new 2021 lows in the prior session as money flooded back into the American givernment bond market.

Falling real yields have been widely cited as one major driver of the recent Dollar downturn and key reason for anticipating further losses in 2021. This week's declines could have been at least partly the result of the outlook for newly inaugurated President Joe Biden's $1.9 trillion stimulus bill, which could struggle in its passage through Congress unless watered down in size. 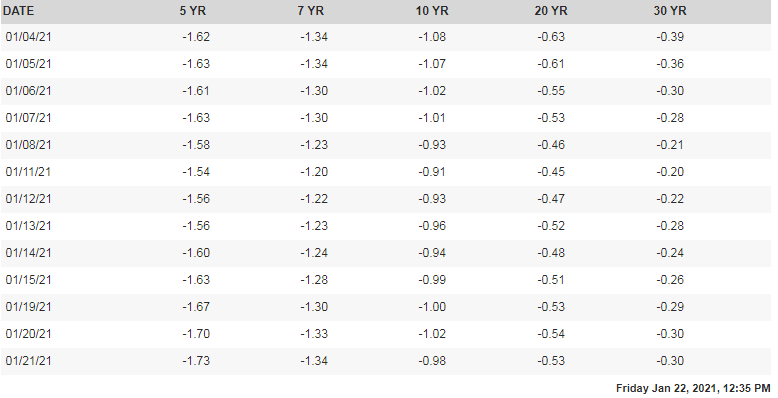 "FX is moving sharply against recent trends as the commodity dollars are suddenly on their backfoot, while a less dovish than expected ECB is seeing the euro firming across the board, with the USD likewise firming against risk-correlated FX, especially in EM. The SaxoStrats team is urging near term caution on risk exposure, and this goes for currencies as well," says John Hardy, head of FX strategy at Saxo Bank. "Although the conditions for USD weakness had been about as supportive as they possibly could be in recent days, with treasuries trading sideways and maximum risk-on in global equity markets, the USD weakness underwhelmed."

Watered down stimulus would mean reduced support for the U.S. economy, potentially lower expectations of inflation further down the line and lesser new debt issuance from the U.S. Treasury. So far this has seen declines in shorter maturity U.S. bond yields wrack up faster than falls in inflation expectations, leading to new 2021 lows for 'real yields' around the five-year maturity area. These moves ought to have sunk the Dollar and lifted prices of stocks, commodities and the Euro if recent trends are to continue and narratives were right but the only thing to have risen here on Friday was the Euro and even then there's high uncertainty about whether that move is sustainable.

"It’s always a huge risk to warn clients that it is time to take some risk exposure off the table when things are going as well as they have for months on end, but that’s exactly what I am set to do here," says Steen Jakobsen, chief investment officer at Saxo Bank. "SaxoStrats and I have no reason to think we can time anything or predict the future, but we want to encourage especially long-only investors and those most steeped in the momentum trades of the last 9-10 months to consider taking some profit here on signs that market fatigue is starting to show: once is chance, twice is coincidence, three is a pattern." 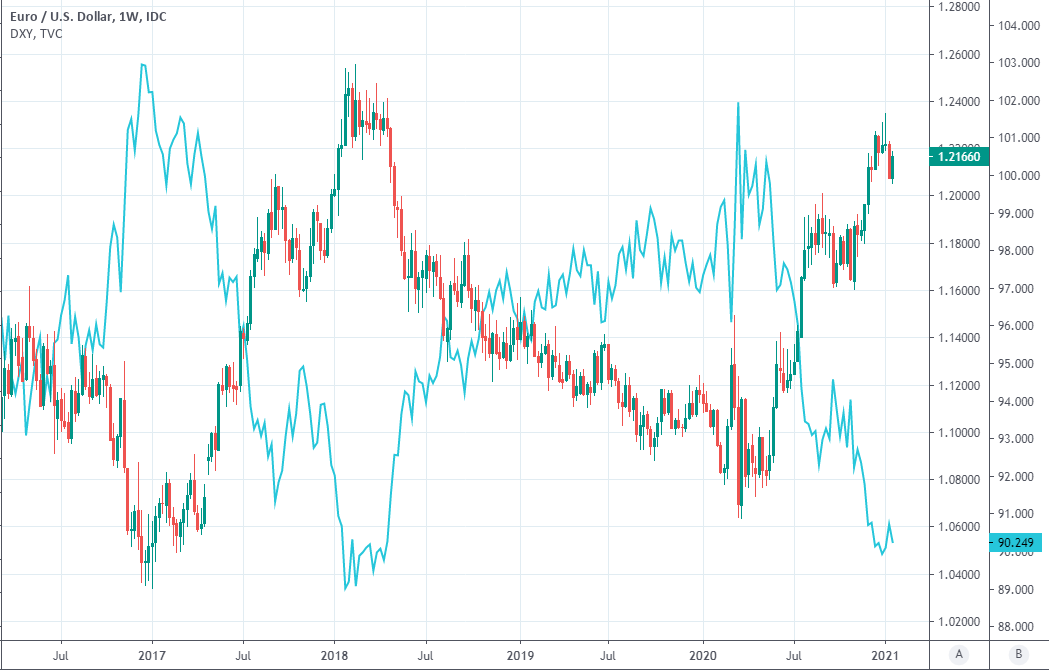 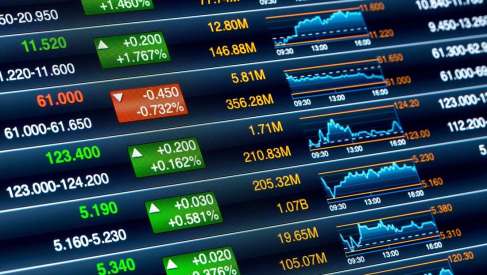