A better-than-expected U.S. economic survey has sent the Dollar sharply higher against the majority of its peers in early U.S. market trade at the start of the new week.

The IHS Markit Services PMI for November - which gives an immediate snapshot of the state of the U.S. services sector - read at 57.7, which is above October's reading of 56.9 and well ahead of the consensus market expectation for a reading of 55.0.

But it was the Manufacturing PMI where the beat was largest, with a 56.7 figure coming in ahead of October's 53.4 and the consensus estimate of 53.

The Composite PMI - which rebalances the two results to account for their share of the economy - read at 57.9, up on the previous month's 56.3.

Not only did the data suggest the U.S. economic recovery gained momentum at a time when Europe's economy has gone into reverse owing to new covid-19 lockdowns, but the survey showed hiring had reached an all-time high. 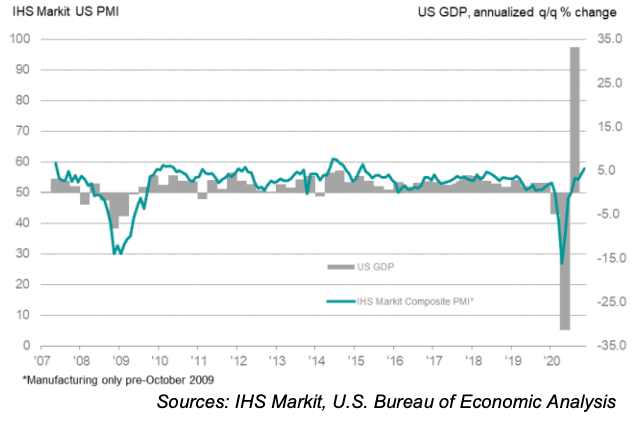 Importantly, IHS Markit - compilers of the report - said respondents to their survey reported an unprecedented increase in prices.

The combination of rising employment and rising prices lead markets to bring forward their expectations for the next Federal Reserve rate hike, furthermore the data suggests the pressure on the Fed to ease further in coming weeks is diminishing.

The foreign exchange market's typical response to such developments at the Fed is to bid the Dollar higher; the Euro-to-Dollar exchange rate went from 1.1890 ahead of the data to record levels at 1.1830: 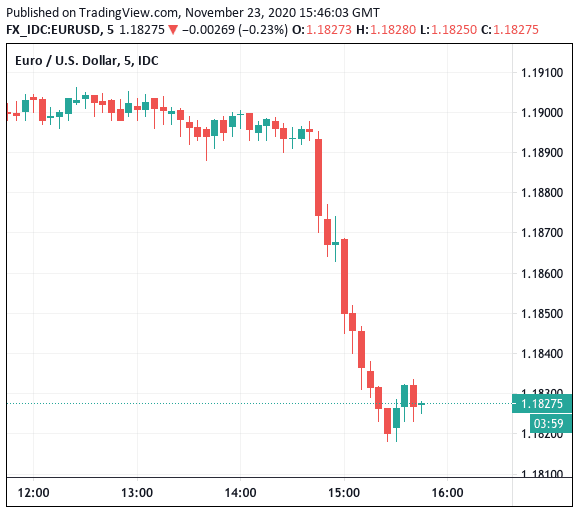 Above: The Euro lost value against the Dollar on the PMI data release. Automatically book your ideal exchange rate when it is reached in the future, learn more here.

IHS Markit reported improving demand environment allowed increasing numbers of firms to raise their selling prices, with November consequently seeing the quickest rise in prices yet recorded by the survey.

The rate of inflation hit a record high in the service sector and a 25-month high in manufacturing.

Markets are currently accustomed to a view that inflation is likely to be absent from the economic landscape for many months, and potentially years, to come. Therefore, any hint that inflationary pressures are building would likely prompt a reaction from the Federal Reserve in the form of higher interest rates.

The divergence between Eurozone and U.S. economic fortunes is stark: while the U.S. economy continues to recover at a clip, the Eurozone's composite PMI fell to 45.1 in November, down from 50.0 in October and below the consensus market forecast for 45.80.

The Eurozone Services PMI fell to 41.3 from 49.6 previously, a contraction triggered by the lockdown measures imposed by Eurozone governments in response to a second wave of covid-19 infections.

"We expect the current lockdown measures to remain largely in place during the next few months, until the introduction of a vaccine will have resulted in immunity for key workers and the most vulnerable groups in society, which we expect be late in 2021Q1 or early 2021Q2. Therefore, we expect activity in the services sector to remain subdued throughout 2020Q4-2021Q1," says Aline Schuiling, an economist at ABN AMRO Bank N.V.