The Euro-to-Dollar rate enters the new week in a position of vulnerability as European leaders' negotiations over the EU recovery fund were set to end without agreement despite two significant compromises having been tabled, threatening appetite for the single currency.

Europe's single currency was close to March highs at the Friday close so may be vulnerable to profit-taking early this week after a special European Council meeting overran into Sunday and looked set to end without a deal on the €750bn coronavirus recovery fund and next seven-year EU budget.

Few if any had expected an agreement to emerge from the meeting that was initially planned for Friday and Saturday, though many hoped to see a pathway toward a compromise that could be pulled together in subsequent weeks.

Reports emerging from the negotiations suggest they remained deadlocked even after European Council President Charles Michel tabled a compromise proposal to reduce the contingent of grant funding from €500bn to €450bn.

"I remain optimistic that we’ll get an agreement, if not today, then before the end of the month. My biggest concern is the attempts to water it down both in terms of size and focus," says Eric Neilsen, chief economist at UniCredit Bank.

Most troublingly for the Euro were reports as the talks neared their end that not even a further reduction in the proposed share of grant funding, from the original €500bn to 350bn, had been enough for progress. The economic benefits of the relief package are rooted in the large share of grants within the overall proposal given they would finance the recovery of hard up members without adding to debt piles that are already considered to be too high. 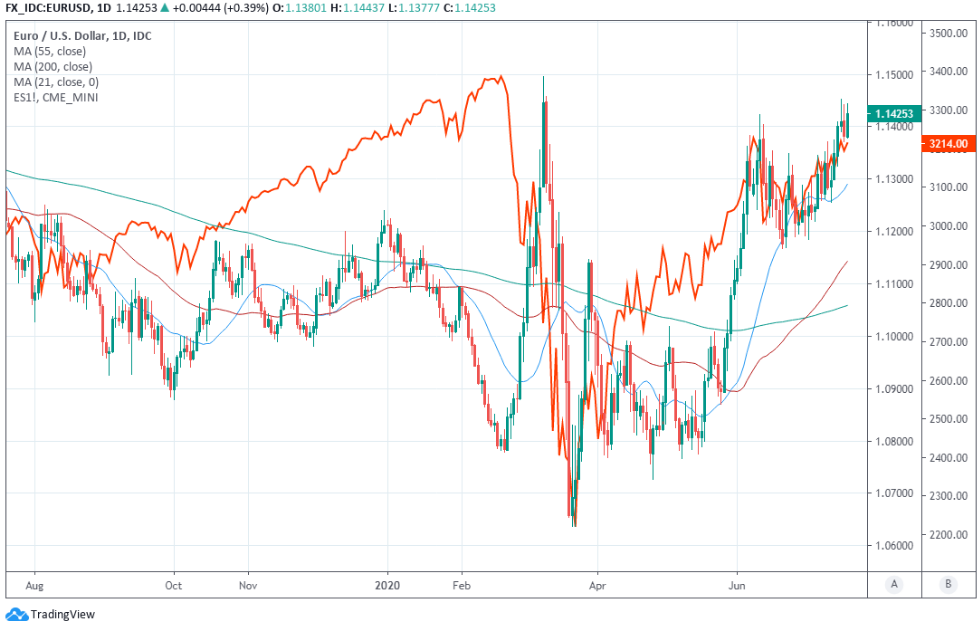 "The cross still has the March high at 1.1495 in its sights. It represents quite formidable resistance which we would expect to cap at first," says Axel Rudolph, a senior technical analyst at Commerzbank, in a Friday note.

Northern countries led by the Netherlands and dubbed as "frugal" or "thrifty" are reluctant to finance 'periphery' countries often painted and perceived as profligate, but there were also reports of objections from Mediterranean countries over conditions that some members were attempting to impose on those who draw on the fund. In short, the meeting has placed a question mark over whether the crucial economic package will ever see the light of day.

"Our base case is for some progress towards a compromise being made, but no final agreement reached just yet as time for more negotiations will still be required. But if negotiations were to appear to be on the right path (and the agreement being a question of when rather than if), this is likely to be positive for EUR, and EUR/USD is to head likely to move to the 1.1450/1.1500 level early next week," says Chris Turner, regional head of research at ING.

The Euro has risen more than 5% against the Dollar since the original €500bn Franco-German proposal gave birth to the €750bn fund debated Sunday so the outcome could threaten appetite for the single currency, especially in light of the substantial haircut to the grant contingent of the fund. 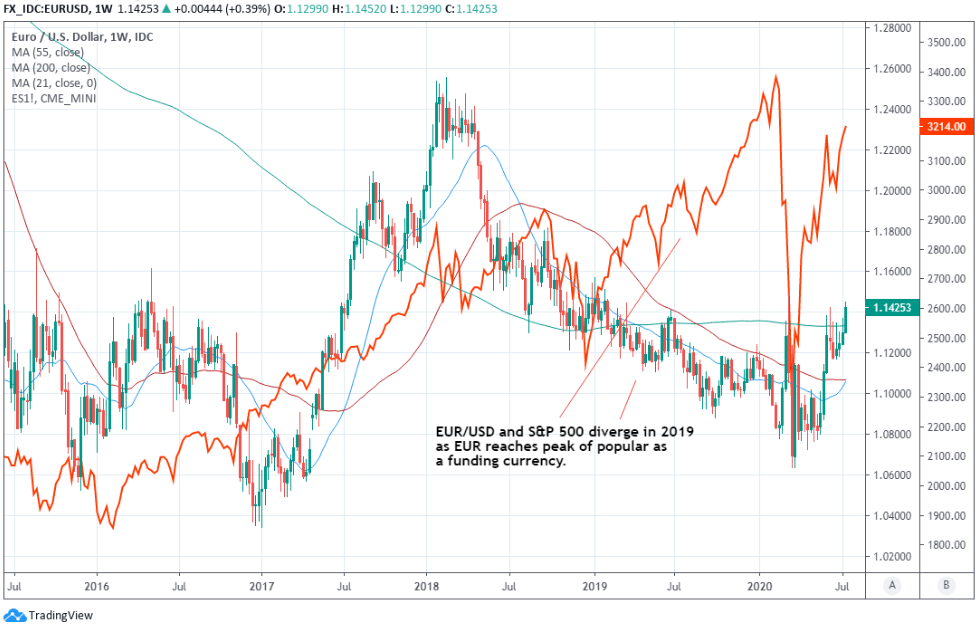 "There is optimism heading into the EU summit as EUR/USD again breaks out of 1.14. Price action for EUR hinges on whether there’s headway made at the summit, with news unlikely to come until later in the day. A lot of good news is in the price, which suggests that risks are tipped towards disappointment. Still, a more constructive backdrop in the EU points towards dip buying for EUR/USD," says Sarah Ying, a strategist at CIBC Capital Markets.

"We are slightly more worried than we were a few days ago. We are still working under the assumption that something sufficiently close to the European Commission proposal (EUR750bn in total, with two-thirds in grants) can be struck. But beyond the discussion on grants and size, we think a more dangerous element is the discussion about governance and conditionality," says Robert Wood, an economist at BofA Global Research.

The fund is a symbolic display of solidarity between rich and poor members as well as a demonstration of European leaders' commitment to doing whatever it takes in order to safeguard or advance the bloc's future. If perceived conflicts of interest between the North and South prove to be intractable and are allowed to either sink the recovery fund of water it down beyond recognition, the Euro-to-Dollar rate could find itself coming under pressure again.

"A lack of consensus on funding could hamper the recovery effort in Europe," says Jack Chambers, a strategist at ANZ.

Further down the line, investors could again begin to wonder whether the bloc will ever be cohesive enough to evolve beyond its current form. Put differently, fresh questions could be asked about whether the Eurozone and European Union have a long-term future in the event that the fund is reduced to subsidised form of debt financing or if it doesn't materialise at all.

"If the Recovery Fund ends up looking like something close to a full a macroeconomic adjustment programme, nobody would want to use it or, if used, it would likely become highly dysfunctional. We would likely be back, eventually, to the toxic narrative we had back in February," BofA's Wood says.

Price action will be dominated in the early stages of the week by the response to the weekend's developments, although stock markets and looming corporate earnings figures will also be key for the single currency.

Important earnings include those for Tesla on Wednesday as well as Twitter and Amazon on Thursday. They're released with the S&P 500 and risk currencies testing their highest levels since March.

Investors might also pay some attention Friday to July's IHS Markit flash manufacturing and services PMI surveys which are expected to show both sectors returning to growth in France during July. The German services sector is expected to have returned to growth this month although its mighty manufacturing industry is seen remaining in contraction territory. Beyond economic data, market responses to corporate earnings and the recovery fund, appetite for the U.S. Dollar will be a key influence on the Euro. 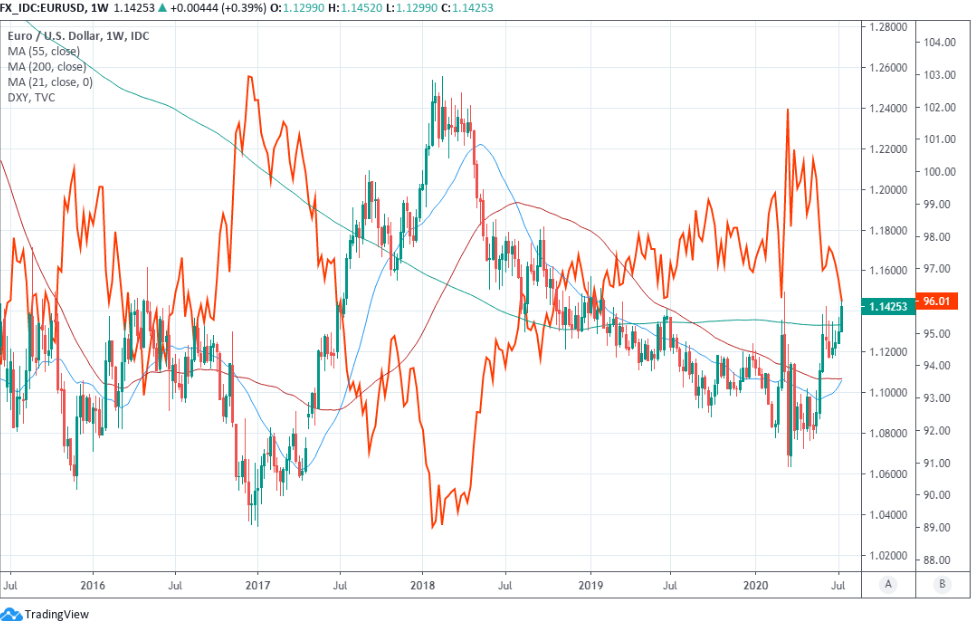