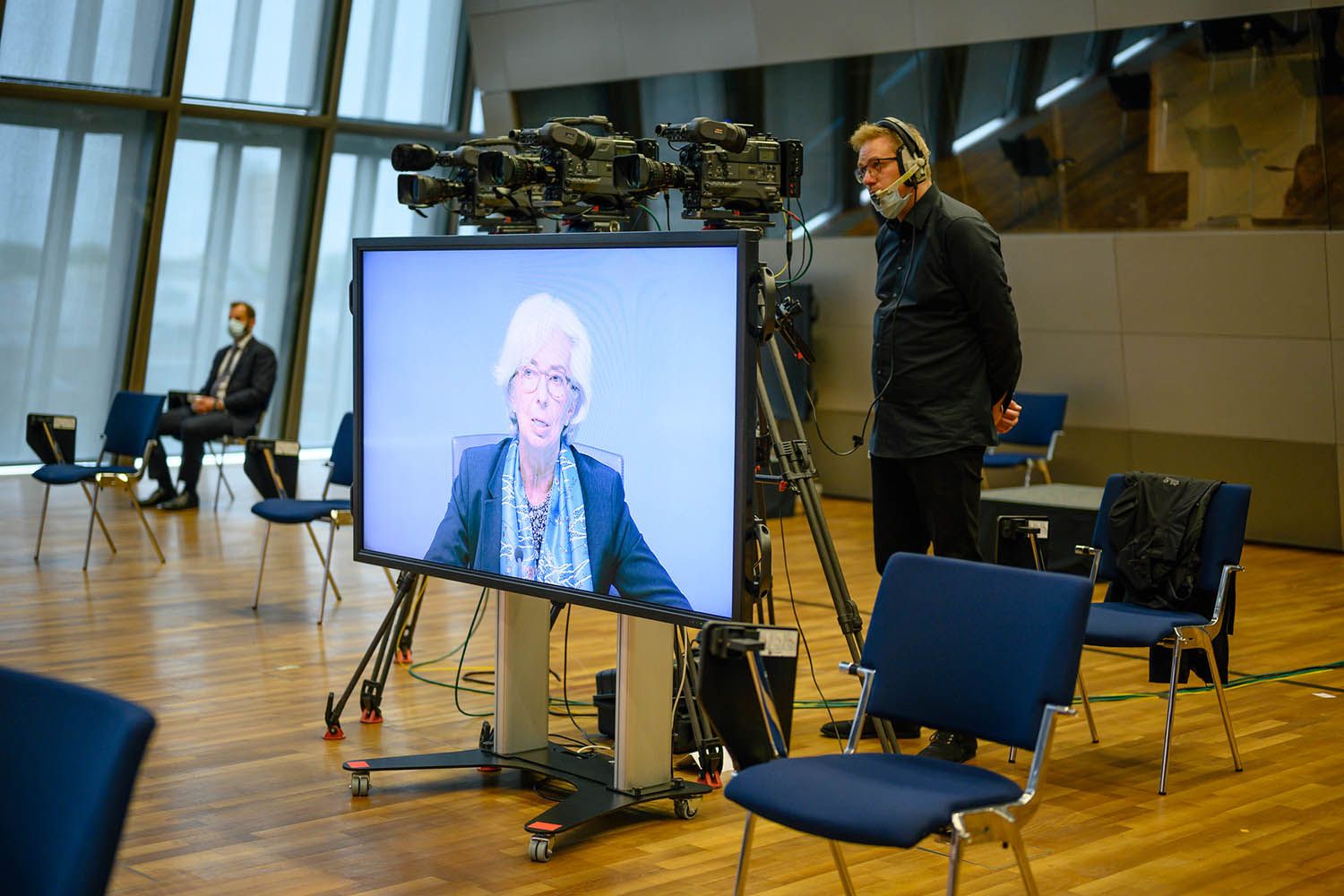 The Euro-to-Dollar rate was paring losses on Thursday after the European Central Bank (ECB) stayed its ultra-accomodative monetary policy course and as greenback softened ahead of the North American open, with global factors seen in the driving seat of the single currency.

European Central Bank President Christine Lagarde said the Eurozone economy is expected to pick up this quarter but reiterated that risks to the outlook remain slanted toward the downside, before urging European Union leaders to "quickly agree an ambitious package" in talks about the Next Generation EU recovery fund on Friday and Saturday.

The ECB left the interest rate on the main refinancing operations, the marginal lending facility and the deposit facility unchanged at 0.00%, 0.25% and -0.50% respectively following Thursday's meeting, in line with expectations.

Its Pandemic Emergency Purchase Programme (PEPP), the banner under which it buys bonds as a result of the pandemic, was left unchanged with a €1.35 trillion allocation. The ECB confirmed the PEPP will remain in operation until at least June 2021, alleviating fears of a possible early end to it.

"A few policymakers have come out and cast doubt on whether the expanded program will last that long and the amount of net buying under the program has slowed down markedly over the past few weeks," says Bipan Rai, North American head of FX strategy at CIBC Capital Markets, who was looking for "commitment from Lagarde" on the matter. "We remain constructive on EUR/USD, and like buying dips especially towards the 1.1330 level." 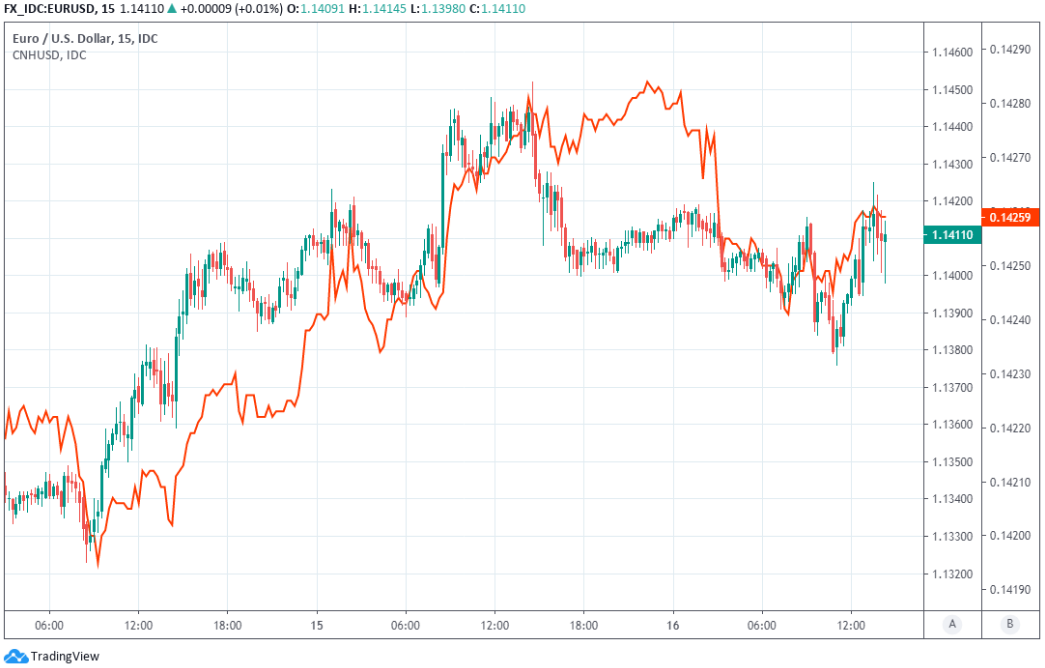 The ECB can buy a range of bonds under the PEPP and flexibly rather than according to members' shares of Eurozone GDP, with the aim of pinning borrowing costs to the floor and sparing less credit worthy countries from problematic increases in borrowing costs as they clean up after the coronavirus.

Bond purchases under the additional €120 bn envelope announced in March will continue until the end of 2020 while the origininal quantitative easing programme will continue buying €20 billion per month for an unspecified period.

"The main story is clear enough, though. The ECB is going to make a decision on its stimulus efforts in September, when the Q3 staff projections are released. We still think the central bank will lift the PEPP by a further €250-to-€500B," says Claus Vistesen, chief Eurozone economist at Pantheon Macroeconomics.

In sum, rock bottom borrowing costs will prevail for government, company and household alike at least until after the midpoint of 2021, although much about the outlook is now in the hands of politicians rather than the ECB.

The ECB already expanded its pandemic purchase programme by €600bn in June to help prevent further increases in 'periphery' economy bond yields that had risen as a result of investor concerns over their long-term solvency prospects. The increased commitment provided reassurance to markets that were getting flighty about the lack of a European response to the coronavirus crisis, in part because of the extent to which dire financial straits limit some governments' capacity to support their economies. 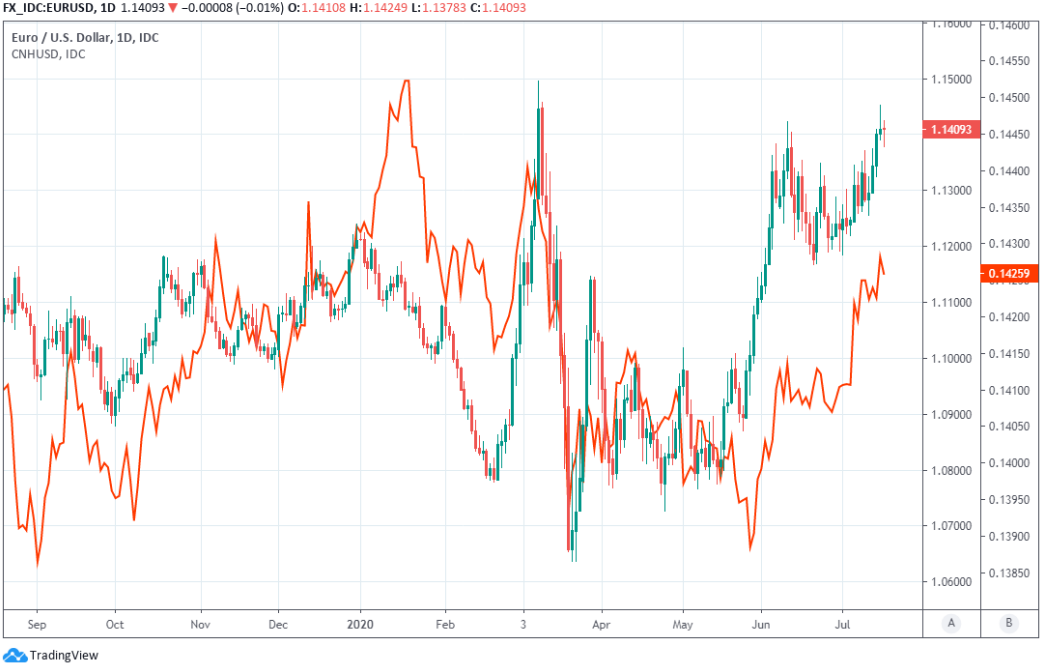 "Movements in the broad USD and risk appetite are important drivers of EURUSD right now. We continue to think that spreads and the EUR are both largely 'priced' for an agreement on the EU's 'rescue fund' at this weekend's European Council meeting, but that would still leave room for a relief rally in the EUR once the deal is done. Regardless, we would probably be content to add EURs/buy dips below 1.1300, says Stephen Gallo, European head of FX strategy at BMO Capital Markets.

The Euro pared losses against the Dollar ahead of the press conference, taking it back above the 1.14 handle and helping to bolster the single currency's gains over most other rivals. The Euro was the third best performing major currency on Thursday, behind only the U.S. Dollar and Swedish Krona, although the Euro itself has been taking its cues from global risk appetite and the outlook for it depends heavily on progress toward an EU recovery fund agreement in Friday and Saturday's European Council meeting.

Euro resilience comes ahead of a specially convened EU meeting in which markets hope to see member states move toward endorsing the €750bn recovery fund, which is intended to provide €500bn of grants and €250bn of loans to buttress member states' recoveries out of the coronavirus trough.

The fund has negligible implications for the growth outlook in the short-term but investors and the Euro like the idea of a so-called risk sharing mechanism in the form of mutualised debt, as well as the prospect of accelerated integration of EU members. The Next Generation EU fund was intended as a step in the direction of both, although it doesn't actually offer the kind of mutualised liability many had in mind and its detractors from the Netherlands, Denmark, Sweden and Austria must be brought on side for it to win the unanimous endoresement it needs. The multiannual EU budget must also be approved simultaneously.

"If the EU does agree on the package, or even a diluted version of it, then expect the Euro to advance higher with $1.15 the next upside target for EUR/USD. No deal could generate aggressive Euro selling and open the door to $1.12 against the dollar. The EU summit concludes on Saturday so any market volatility will be realised on late Sunday evening," says George Vessey, a currency strategist at Western Union Business Solutions. 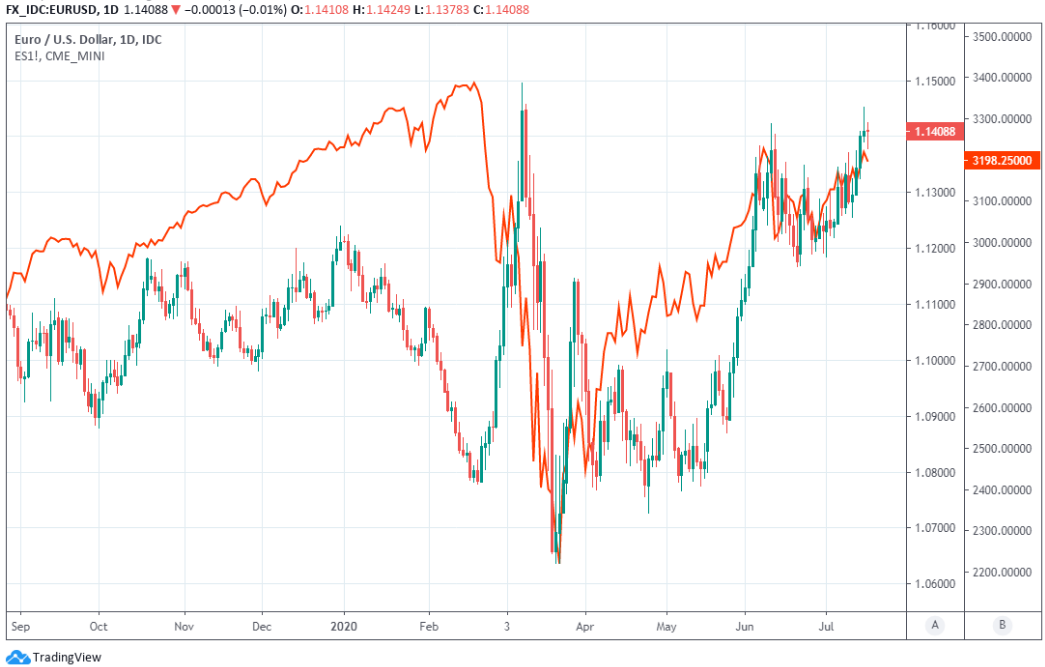