The Euro enters the new week on the defensive and with risk appetite in the driving seat ahead of Thursday's EU meeting, from which investors hope to see movement toward a compromise on coronavirus recovery fund proposals.

Europe's single currency begins trading Sunday near to a key technical support level that broke its fall in the prior week and will likely take its cues from technical considerations as well as the trajectory of stock markets, which have been a dominant influence on many currencies of late.

This is after a three-day rally culminated in the Euro rising above 1.14 on Wednesday only to turn lower again after the Federal Reserve (Fed) neglected to provide grounds for a continuation of the 10-week recovery in stock markets, and as fears over a possible second wave of coronavirus in the U.S. built.

"The resurgence of Covid-19 cases offered a motive for some aggressive profit-taking in equity markets after a long rally. If this week was about a physical correction, next week will tell us how solid market appetite is. We suspect that while headlines about second waves in the US may temporarily upset sentiment, risk assets may once again prove resilient, still counting on the Federal Reserve's printing machine and taking heart from the restart of the global economy," says Chris Turner, regional head of research at ING.

Much like Sterling, Europe's single currency spent the latter half of the week in retreat earlier highs and closed Friday at 1.1260, which is the upper boundary for a cluster of support levels that stretch as far down as 1.1170. Those are tipped bytechnical analysts to continue underpinning the Euro-to-Dollar rate this week although it's unclear that they would be able to survive a more protracted sell-off in stocks if one was to occur.

"EUR/USD charted a new high at 1.1422 but this was accompanied by a divergence of the daily RSI and coupled with a 13 count on the 240 minute chart, this implies some consolidation near term. For now while it holds over the 1.1240/1.1170 December 2019 high and 38.2% retracement,, scope remains to retest of the 1.1495 March peak," says Karen Jones, head of technical analysis for currencies, commodities and bonds at Commerzbank. 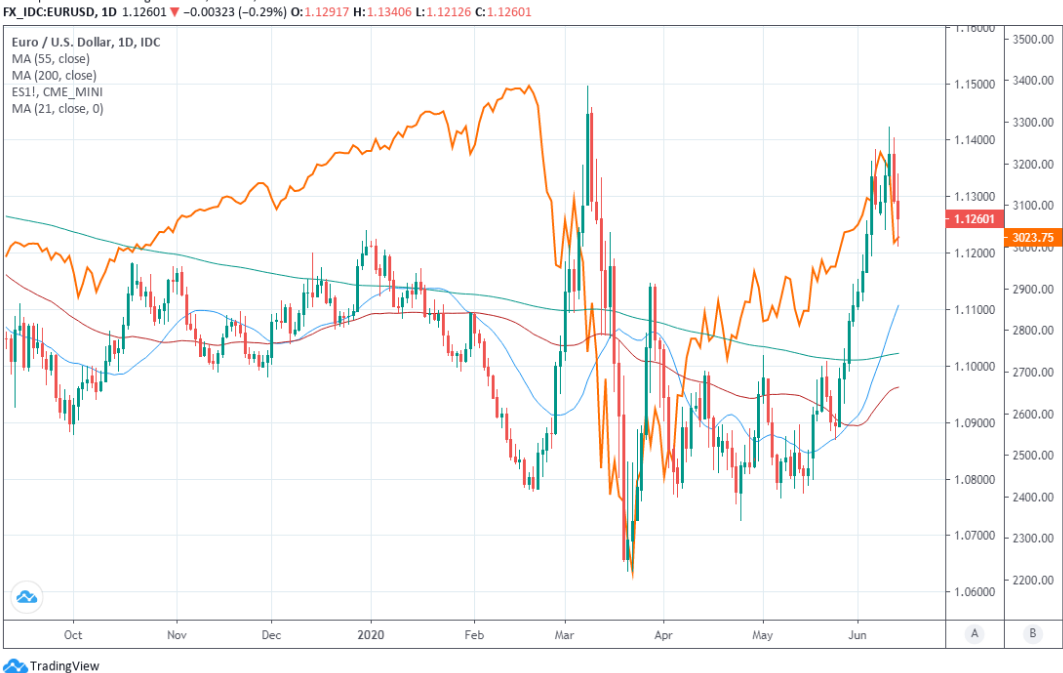 "We think the EUR appreciation is becoming stretched but overbought conditions can persist for lengthy periods or can be resolved by a sideways consolidation in trends that are as deeply entrenched as this one (looking at the alignment of the DMI oscillators on the short, medium and long term charts). The EUR rally may moderate, in other words, but there is no clear sign at this point that it is poised to reverse in a meaningful way," says Juan Manuel Herrera, a strategist at Scotiabank.

Stock markets will respond early in the new week to the further-increased prospect of a second wave of coronavirus infections in the U.S. as well as China after parts of Beijing re-entered 'lockdown' at the weekend. New cases have continued to rise in a handful of U.S. states including Florida, Alabama, Louisiana and South Carolina while the global tally has increased with the ongoing outbreak in large but developing countries. China also reported 57 new cases Sunday, its highest number since March.

If risk markets didn't like the idea of a second wave in a handful of U.S. states last week they might not welcome on Sunday and Monday, the prospect of another outbreak occuring in the capital city of the world's second largest economy. But absent continued declines in stocks, the Euro could stabilise and investors' attention revert toward the European Council meeting that gets underway on Thursday and continues into Friday.

"We don’t bet that the Euro area recovery fund will be ratified already at the EU-27 council meeting this week," says Andreas Steno Larsen, chief FX strategist at Nordea Markets. "There will be long meetings/summits that last overnight and ultimately the proposal that can obtain an unanimous backing may include a tad less grants and a tad more loans, but the recovery fund has too much political tailwind to bet against it. The Germans will likely be allowed to “implement it” during their EU presidency (they take over 1st of July)." 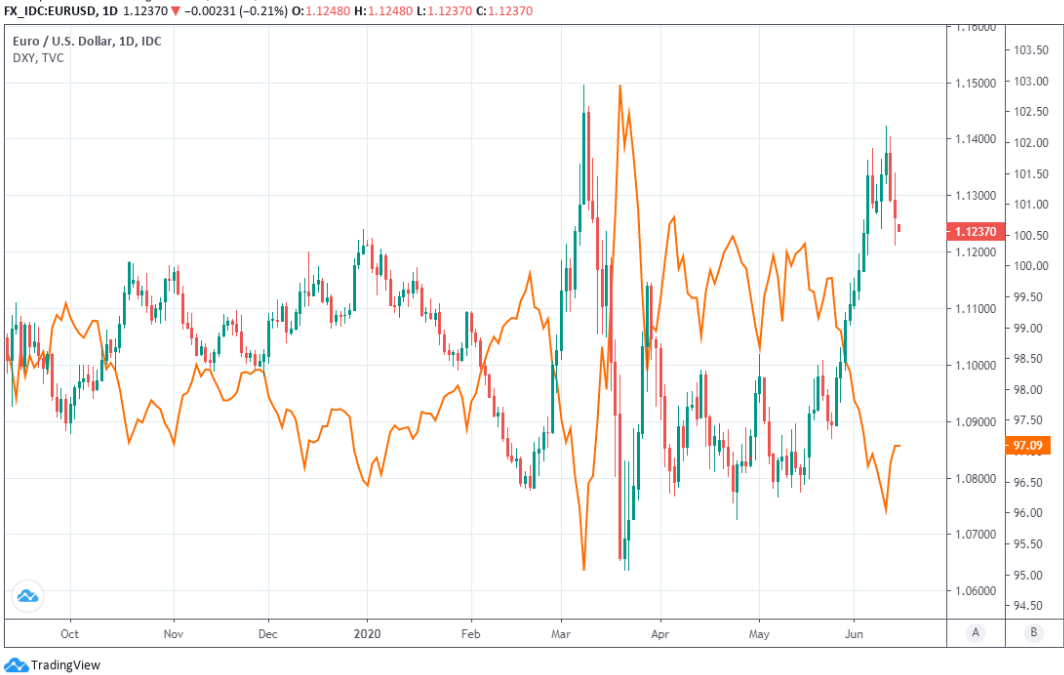 Investors' appetite for Euros has improved markedly since May 18 when France and Germany suprised the market with a proposal to share up to €500 billion of grants among member states who're struggling with the cost of the coronavirus, which prompted a rally that's since lifted the Euro-to-Dollar rate from 1.08 in late May to a high of 1.1433 last week, although it's a larger €750bn European Commission counter-proposal that EU leaders will debate this week.

There has been pushback against the commission proposals from a range of member states although markets have been happy to assume that national leaders will be able to agree a compromise that enables funding to be made available to member states from January 2021. Analysts see scope for compromises to be made over the degree of grants Vs loans within the package, although that's not the only obstacle that leaders need to work around if the recovery fund is ever to see the light of day.

"Negotiations about the €750bn fund will be tough, especially with the “frugal four” led by Austria, which prefer a smaller loans-only facility. Many other countries have also raised objections in order to dip deeper into the pot. We expect some signal of common goodwill but no breakthrough yet at the 18-19 June EU summit. Although one or two special EU summits in July will likely make progress, it may take until late 2020 to hammer out the deal," says Holger Schmieding, chief economist at Berenberg. "In the end, a little extra dollop of German money for the EU’s seven-year budget from 2021 to 2027 may help to seal the deal for a stronger Europe."

European leaders will also need to agree the EU's next seven-year budget alongside the recovery fund proposal, and negotiations over the funding of the bloc from 2021 onward have failed once already. Such negotiations are often drawn out affairs involving much horse-trading although the proposed non-virus related increases in spending, not to mention proposed expansion of EU powers and initiatives in a range of areas, mean there's plentiful scope for disagreement. However, what might matter most to markets and the Euro is that talks continue and leaders continue working toward an eventual agreement. 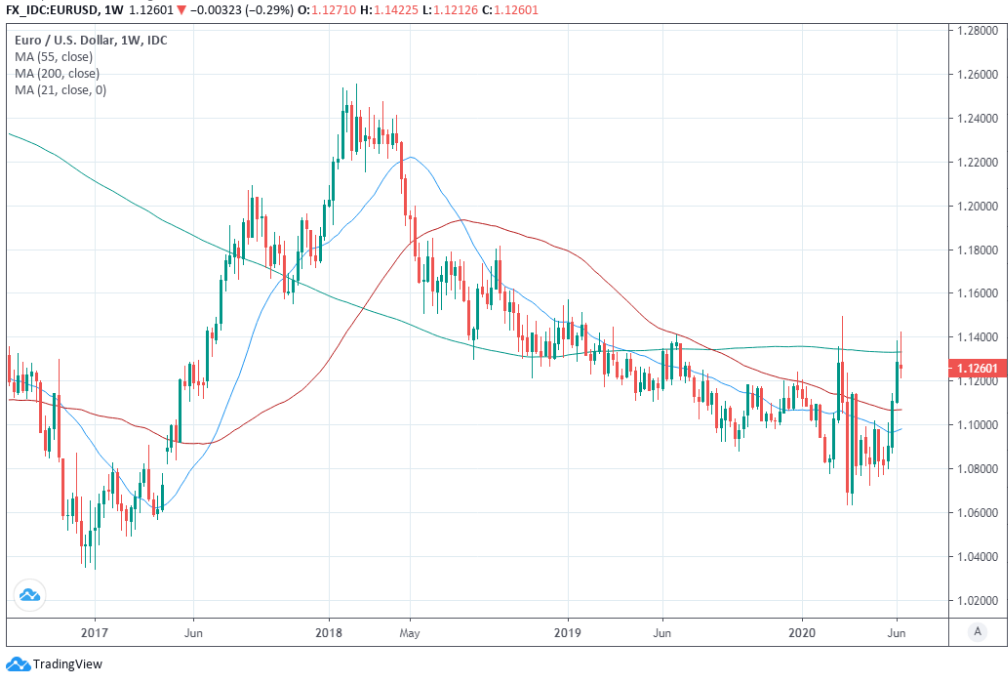