- Is tipped to consolidate around 200-day moving-average.

- As new multi-month range looks to be forming on charts.

- But whether EURsets new multi-year low key to outlook.

Europe's single currency dipped lower in a risk-on market that saw all safe-havens lose ground to higher 'beta' counterparts as stock markets and commodity prices rebounded in response to further signs that coronavirus is now spreading at a slower pace in many parts of Europe and the U.S. The number of new coronavirus cases ticked higher in many European countries on Monday, but only after several days of steady declines that have prompted speculation about a 'peak' in the outbreak.

Italy, Europe's epicentre of the coronavirus outbreak, saw three back-to-back days in which the number of new coronavirus infections was lower than in the previous day heading into Monday while similar occurances were observed in Spain and France. The ebb of momentum behind the infection has encouraged markets to believe that 'lockdown' measures taken in many economies may now be bearing fruit although the data has done little to benefit the Euro so far. 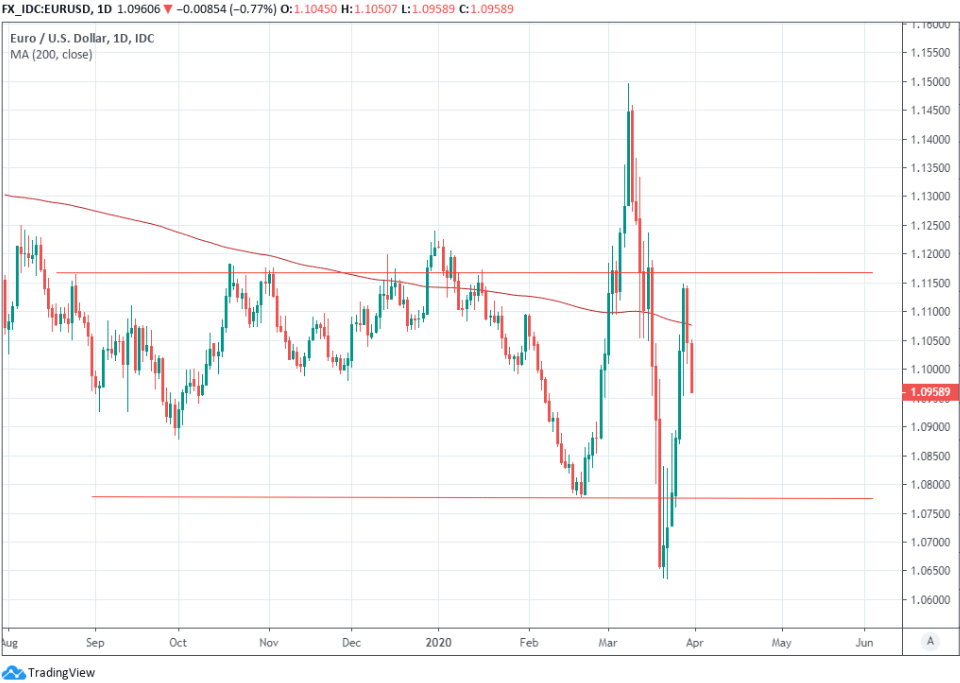 Above: Euro-to-Dollar rate at daily intervals, headed back below 200-day average and toward bottom of new range.

Europe's unified unit has been more volatile than at any point in recent years amid the coronavirus outbreak, which ignited a great bonfire of short-sellers who'd borrowed and then sold the Euro in order to fund bets on riskier emerging market currencies that soon crumbled when the scale of the coronavirus threat to the global economy became clear. This led to a Euro rally that was first reported as a prospect by Pound Sterling Live early in February.

"The past few days have seen quite a shift in the dollar’s behavior. Whereas before mid-March it moved in line with equities (in both directions), in the last couple of weeks, it's become more of a risk-off/risk-on barometer, rising when equities come off and falling with stronger markets," says John Velis, an FX and macro strategist at BNY Mellon.

The flushing out of short-sellers has since run its course, with the ebb of positioning-induced demand dragging the single currency back from highs near 1.15 seen in early March and leading it to break below an important trendline that's guided the Euro-to-Dollar rate steadily higher over a 35-year period. The Euro has often traded for months at a time within narrow two-to-three cent ranges against the Dollar in what has been a slow but steady depreciation dating back to 2014. And it could now be in the process of establishing a new multi-month range, although whether or not it sets a further new low over the coming days could prove to be key in answering this question. 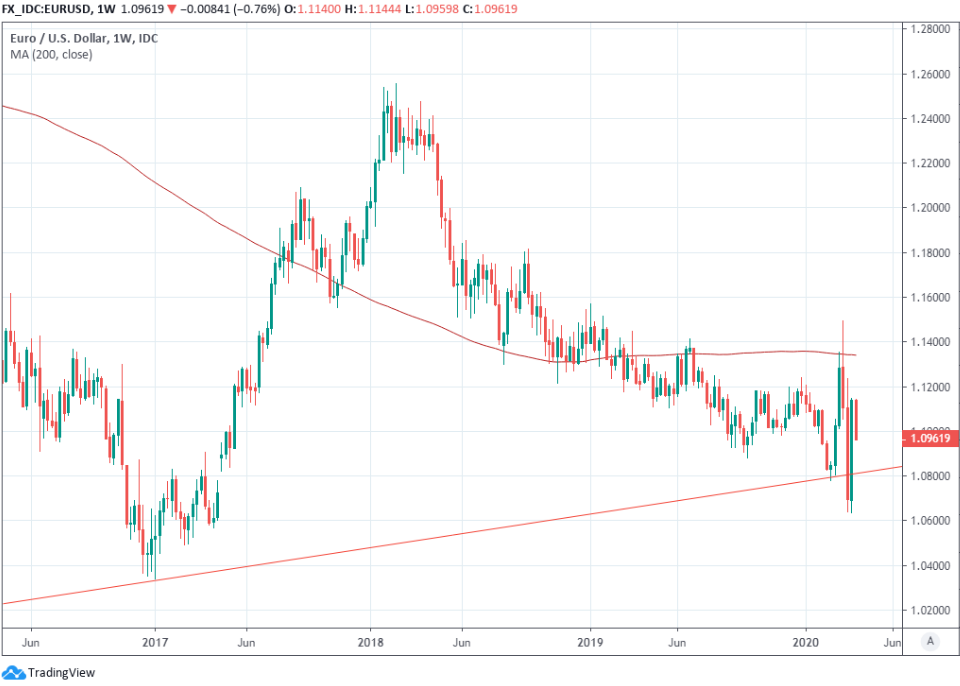 Above: Euro-to-Dollar rate at weekly, breaking 35-year trendline in March after being blocked by 200-week moving-average.

Much like citizens and governments around the world, analysts, economists and investors have been wrongfooted by the coronavirus, a true ‘black swan’ if there ever was one, and one so rare that incorporation of it by anybody into any forecast or expectation would forever be statistically foolish.

A global economic slump that torpedoes risk asset valuations and stokes significant demand for liquidity would favour the Dollar over the Euro in most circumstances and it's this demand for the greenback that's seen as the primary driver of the Euro-to-Dollar rate in the short-term.

There were more than 800k confirmed coronavirus infections across the globe on Tuesday, according to Johsn Hopkins University data, and in excess of 38k fatalities with the deadly viral pneumonia now present in a substantial majority of all the world's countries. However, the U.S. has leap-frogged Italy and China in the last week to develop the world's largest outbreak that has led major North American metopolises to also be placed into 'lockdown.'

"Coronavirus still has a strong grip on the Eurozone, but the pressure is easing, primarily due to a slowdown in the rate of increase in Italy. The daily case and death count will continue to increase over the next few weeks, but with all countries now in more-or-less total lockdown, we expect to see clear evidence of a slowdown across the region by mid-April. That won’t be enough, however, for authorities to allow economies to open, but if we are right, we hope that the screws will be loosened at some point in May, paving the way for a more sustained rebound starting in June," says Claus Vistesen, chief Eurozone economist at Pantheon Macroeconomics. 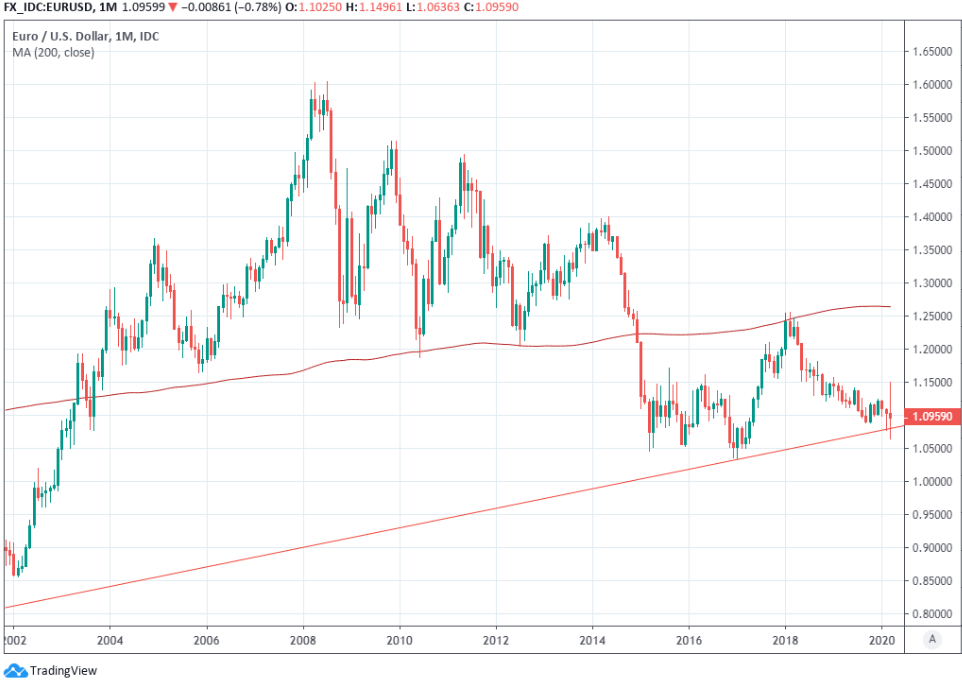 Above: Euro-to-Dollar rate at monthly intervals, testing 35-year trendline after being blocked by 200-month moving-average.

The European Central Bank (ECB), long constrained in its ability to aid the economy after a decade acting as the sole lifeboat of the common currency bloc, has spared no effort or expense in attempts to mitigate the economic effect of the coronavirus crisis. National governments have been quick out of the blocks too with many announcing fiscal support packages worth double-digit percentages of GDP in order to support companies and households through unprecedented economic stoppages that could go on for months yet. European political institutions have been notably absent from the table in what could be a politically problematic development for the post-crisis world.

European Commission President Ursula von der Leyen said last Thursday that an "ambitious new European budget that will support the EU economy" is necessary to get through the crisis. Comments came in after another meeting in which national leaders neglected to endorse so-called 'corona bonds' that would enable the EU to augment the crisis-fighting capacity of economically brutalised and fiscally constrained countries like Italy, who've been required by now-suspended stability and growth pact rules to reduce their budget deficits year-after-year ever since the debt crisis.

"EZ governments and the ECB are throwing the kitchen sink at Covid-19; will the money get to work? The numbers could well go up further, but we estimate that the combined fiscal and monetary response to the crisis is now edging close to 25% of EZ GDP. That’s a huge number, but it reflects the fact that a quarter decline in GDP is now well within sight over the next six months. Stimulus is increasingly the wrong word; it is life support. In addition, while the absolute numbers show that barriers have been broken down in EZ policy structures, the key challenge is now to get the money and liquidity to where it needs to go, quickly," says Pantheon's Vistesen.