- EUR softens Thursday though market looks for gains in 2020.

- Trump may use EU as trade bogeyman in election campaign.

President Donald Trump said from Davos, Switzerland Wednesday that his threat to impose tariffs on imports of European cars will be succesful in delivering a long-elusive trade agreement and likely before the November presidential election, raising the spectre of an election campaign in which the EU plays the bogeyman role that was reserved for China back in 2016.

This was after the White House incumbent said Tuesday that he'll "strongly consider" tariffs on European cars if a deal is not reached. The U.S. has long complained of lopside car tariffs and EU 'protecionism' that shuts U.S. farmers out of the continental market for agricultural goods, although 18 months of talks have yet to produce tangible results. EU trade commissioner Phil Hogan asked for a reset of the trade relationship with the U.S. when in Washington last week, although he also said there would be "no unity" on this in the short-term.

"The ink on the deal was barely dry before President Trump had returned to making trade threats, this time in an attempt to strongarm the European Union into opening its agricultural markets to the US and to encourage Europe to co-operate with American policy on Iran," says Raoul Leering, head of international trade analysis at ING. "The prospect of further trade conflicts is never far away while he is in the White House. So there is little reduction in uncertainty." 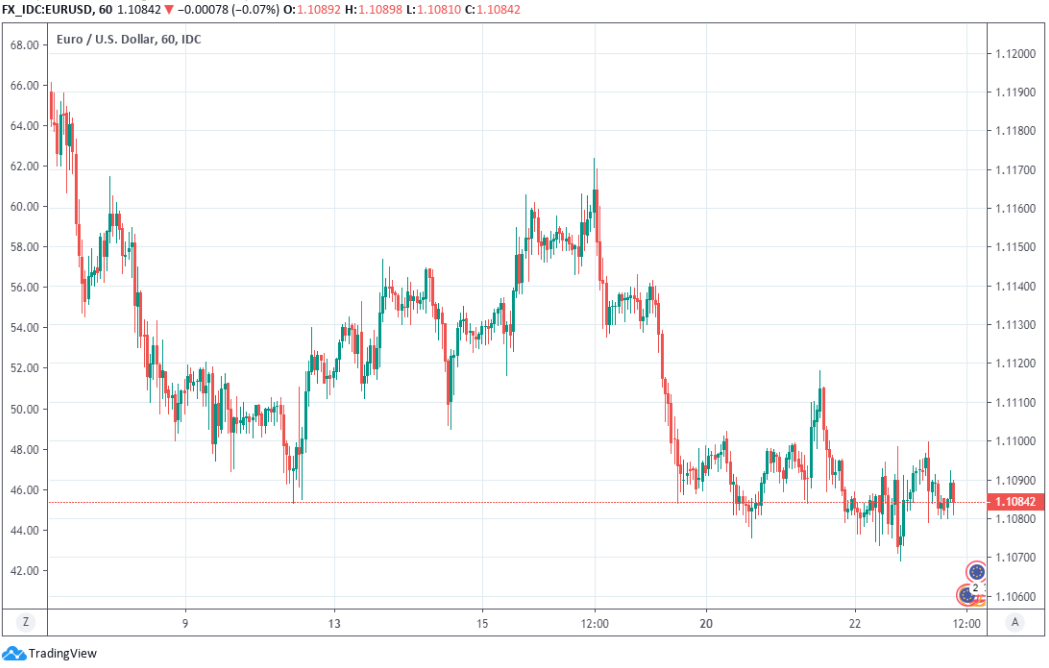 Ironically, the Euro converted a modest intraday loss into a profit shortly after mid-day on Wednesday and around the same time Trump hit the airwaves, even though a tariff conflict with the U.S. could have more severe repercussions for the Eurozone economy than the U.S.-China tariff fight did. And that recently de-escalated dispute was enough to put Germany's economy close to the door of recession even though there was no direct involvement of European countries.

The impact of the U.S.-China dispute on the Eurozone and Trump's rhetoric underline one of the most underappreciated risks to an otherwise rosy consensus outlook for the Euro-to-Dollar rate this year.

Markets see the Euro rising to 1.15 by year-end while some tip it even higher than that, based in part on the expectation that safe-haven flows into the greenback will dry up alongside the ink on the much vaunted 'phase one deal' with China that finally appeared in writing this month.

"We certainly see more risk now from a blow up in the US-EU trade spat following EU Trade Commissioner Phil Hogan’s visit to the US," says Derek Halpenny, head of research, global markets EMEA and international securities at MUFG in a note to clients last week.

Safe-haven demand was a notable crux of support for the Dollar last year while economic underperformance weighed on the Euro as the German and European factory sectors suffered in sympathy with the Chinese as well as broader global economies. So great was investor unease about the outlook for global growth, that not even three interest rate cuts from the Federal Reserve could dislodge the greenback from its upward trajectory. 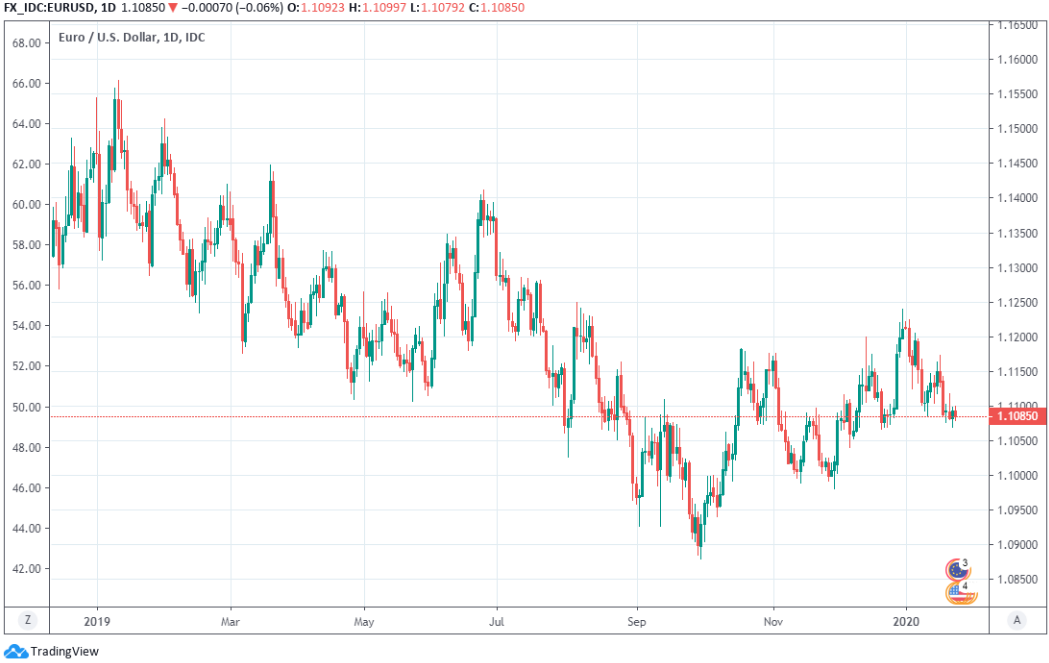 And dislodged from its upward trajectory the Dollar must be if the Euro is to have any hope of exiting a narrow multi-month range and recovering from losses wrought on it since the early months of 2018. But with weakness in the Dollar aside, the only way the Euro can recover lost ground is through an economic recovery that enables the 'normalisation' European Central Bank interest rate policy, which would require a U.S.-EU trade conflict to be avoided.

"Now that the phase one deal between the US and China has been signed, the US will shift focus to the EU. Frustrations have been increasing on both sides of the Atlantic. The EU has made little progress on US requests related to defense spending, China policy and trade policy. We expect the EU to continue negotiations in the usual way, through stalling techniques and retaliations if need be," says Philip Marey, a senior U.S. strategist at Rabobank.

The Euro is one of the lowest yielding major currencies thanks to the negative interest rate policy of the ECB and for that reason it has become a popular 'funding currency' that investors borrow and then sell in order to fund bets on higher yielding assets. That, and the current 1.75% cash rate of the Fed explain why the Euro-to-Dollar rate has remained within such a narrow range against the Dollar even during bouts of weakness in U.S. exchange rates.

Talk of tarifs on EU cars comes amid a growing spat between the U.S. and some EU countries, including the UK and France, over a new and contentious 'digital services tax'. This will target technology company revenues and profits, much to the ire of a U.S, that hosts and headquarters many of the world's leading technology firms. The U.S. is also threatening tariffs for those countries that go ahead with such levies, which puts the UK and France in the firing line. 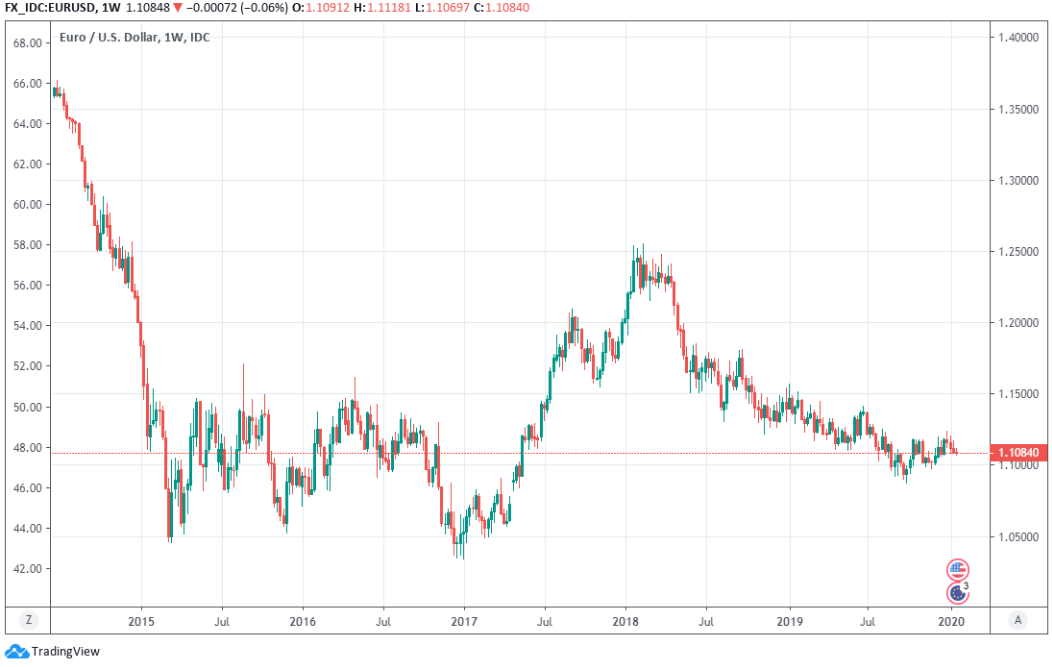 "Under Section 301 procedures the US government is legally permitted to implement tariffs against foreign countries that violate existing agreements or engages in “unjustifiable” or “unreasonable” acts. The digital services tax has been deemed as such," MUFG's Halpenny says.

In October 2017 the EU threw its weight behind an Organisation for Economic Co-operation and Development initiative that both say is aimed at updating international tax rules to make them fit for the digital era, although the OECD's work has gone beyond the scope of existing tax treaties and now includes a proposal for minimum levels of taxation among all signatories.

The EU's official stance is to proceed alongside the OECD although France introduced a tax of its own accord in January which has since been suspended and the UK is moving toward one under Prime Minister Boris Johnson.

The U.S. has threatened retaliation against both, although French Finance Minister Bruno Le Maire said Thursday that Paris is close to a deal with Washington that would avert hostilities on the matter.

"I expect business to continue their ‘wait and see’ approach with regards to investments, which implies only modest growth of industrial production. Therefore growth in world trade will be limited to around half of one per cent. That is pretty dismal," says ING's Leering.