- Valuations and positioning beneficial to USD

In a research piece entitled “EUR/USD: Lower for Longer as Dollar is King” strategists at ING Bank cite 4 reasons for continuing to see the Greenback's outperformance against the Euro extend, downgrading their forecasts for the EUR/USD exchange rate in the process.

The first driver of further EUR/USD decline will be trade war side-effects that are likely to hit the Euro more than the Dollar.

The Eurozone is a more open economy to trade than the U.S. economy, which means its aggregate trade (the total of all imports and exports) is higher as a percentage of GDP than the U.S. 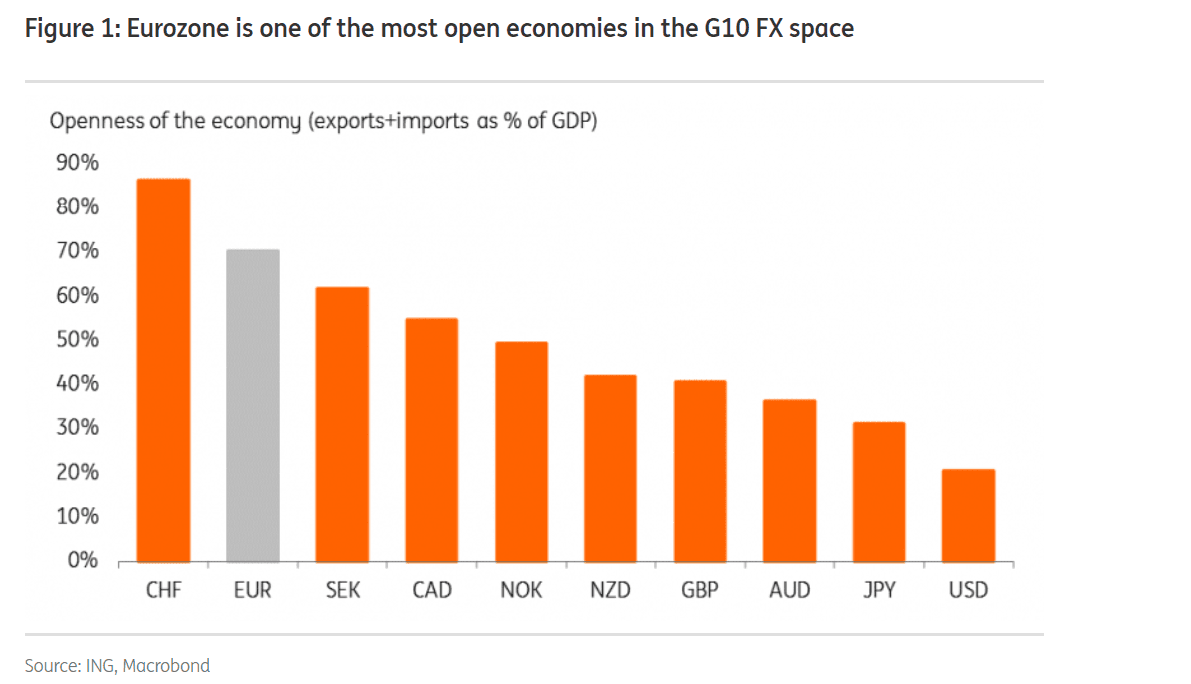 This means the Euro will be more sensitive to worsening global trade tensions than the U.S. Dollar which may even rise at the same time on increased safe-haven flows.

Since ING’s base case is for U.S. China relations to worsen the result will be more demand for the Dollar than the Euro resulting in a fall in EUR/USD.

There is also a ‘non-negligible’ risk of the U.S. imposing trade tariffs on Eurozone car imports subject to a review in mid-November.

The second reason is due to the excessively dovish (meaning in favour of lowering interest rates) market expectations of Federal Reserve (Fed) monetary policy. 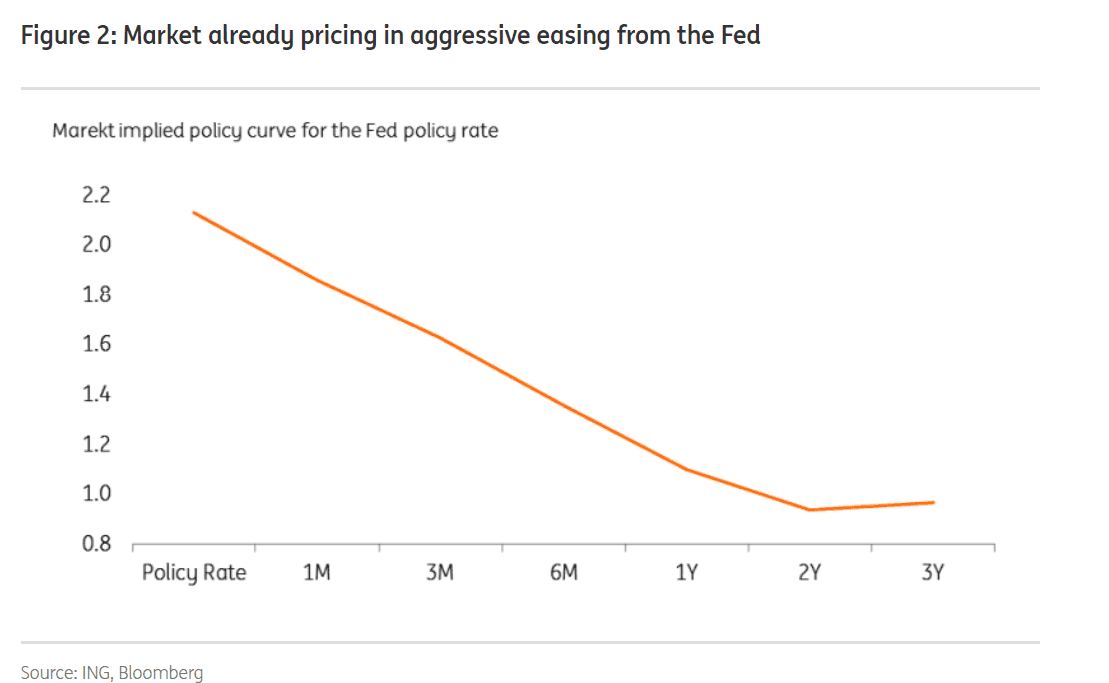 The market is now expecting the Fed to cut interest rates 5 times (assuming 0.25% tranches) over 2 years. ING thinks these expectations are excessive and unlikely to be met. Even if they are met, the bar for them to be surpassed is now set so high it is highly unlikely to be achieved.

Since these expectations can be assumed to have been discounted by the exchange rate already, the Dollar is unlikely to lose any further ground from even more dovish expectations. If anything there is a risk expectations might turn more hawkish as policymakers moderate their view of the U.S. economy’s future growth.

Related to this reason is that the U.S. Dollar continues to gain demand as the ‘carry king’ of the FX ‘currencyverse’.

At 2.25%, base interest rates in the U.S. are higher than in any other major advanced country.

Not only that but the difference between U.S. and Eurozone real interest rates, which are interest rates adjusted for inflation, is even wider, suggesting even more incentive to be in U.S. Dollars. 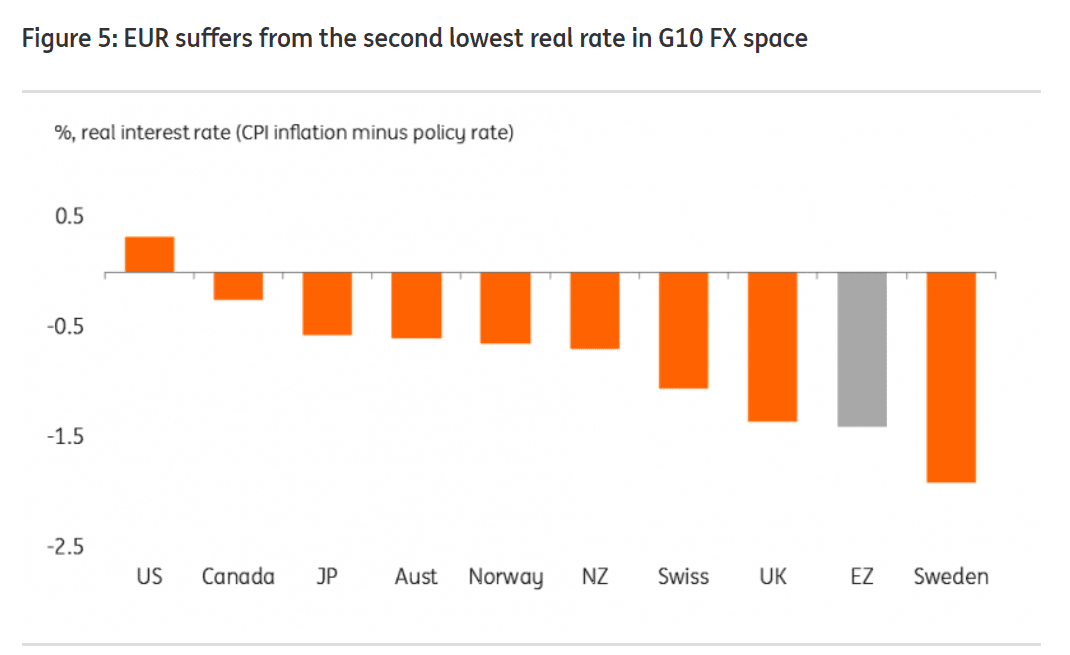 The high carry also impacts on the cost of hedging for corporations, making it more expensive to hedge the Euro than the Dollar, or in ING’s words “For European corporates, the 2.7% three-month hedging costs make the dollar expensive to sell/cheap to buy. And for US corporates, the EUR is cheap to sell/expensive to buy,” says Turner and Krpata.

A third reason is that EUR/USD is no longer undervalued based on the BEER valuation model.

“This is because, over the course of the last year, our estimate of the EUR/USD BEER fair value declined due to an improvement in the US terms of trade (one of the key explanatory variables in the model). With EUR/USD no longer stretched, this means that the pair has scope to decline even further before hitting the valuation limits (which should then provide a soft floor under the cross),” says the strategist.

The fourth reason for expecting EUR/USD to decline is based on an analysis of market positioning. This is the net balance of long versus short positions in the futures market. When positioning is stretched to the limits in one direction or another, the inference is that it will snap back in the opposite direction like an elastic band which has been stretched to its limit and then released.

The level of bearish bets on EUR/USD is not overstretched to the limit, however, says ING, which infers the pair could still have further to fall.

Overall, their analysis leads them to conclude that the pair will continue to trade within a lower range of between 1.05 and 1.10 for the rest of the year.

Their bearish forecast stands in contrast to some analysts who argue the pair will rise because the Fed has more scope to ease than the ECB.

Their argument is that the ECB has run out of room to cut interest rates since the lending rate in the U.S. is already zero, which puts a floor under the Euro.

The Fed on the other hand has more room to cut since the lending rate in the U.S. is 2.25%.

This makes the Dollar more vulnerable to declines from central bank easing and should drive up the pair.