- Longer-term it may be forming a bullish wedge pattern

- Euro to be moved by ECB speculation; U.S. Dollar by employment data

The Euro-to-Dollar rate is trading at around 1.0987 at the start of the new week, after falling 1.35% in the week before after the pair broke below 1.1050 for the first time in almost two-and-a-half years.

The Euro is under pressure, and our studies of the charts are showing the short-term trend is bearish and given the old adage ‘the trend is your friend’ it is likely, therefore, to extend.

The 4 hour chart - used to determine the short-term outlook, which includes the coming week or next 5 days - shows the pair falling in a steady downtrend to new lows. 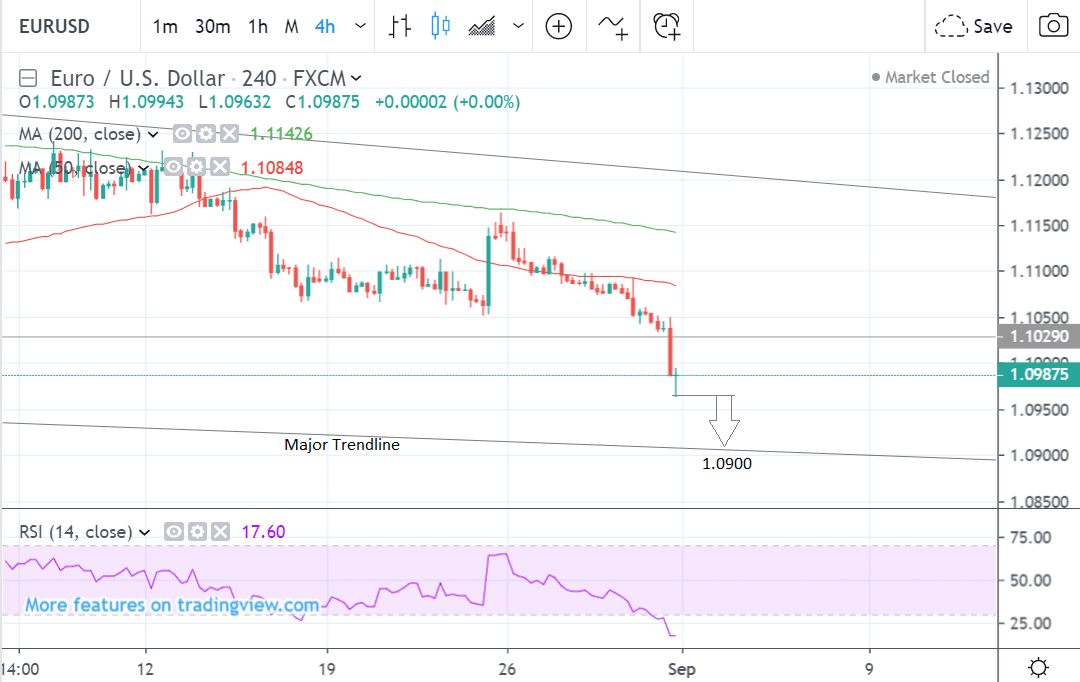 The RSI momentum indicator has fallen into the oversold zone which increases the risk of a pull-back and marginally tempers out bearish forecast, however, it is not enough to negate the downtrend which is likely to continue to new lows subject to confirmation.

A break below the 1.0963 lows would provide confirmation a continuation lower to a target at 1.0900 at the level of the major trendline where the pair is likely to find underpinning support and stall.

The daily chart shows the exchange rate in a longer-term downtrend which is likely to continue. 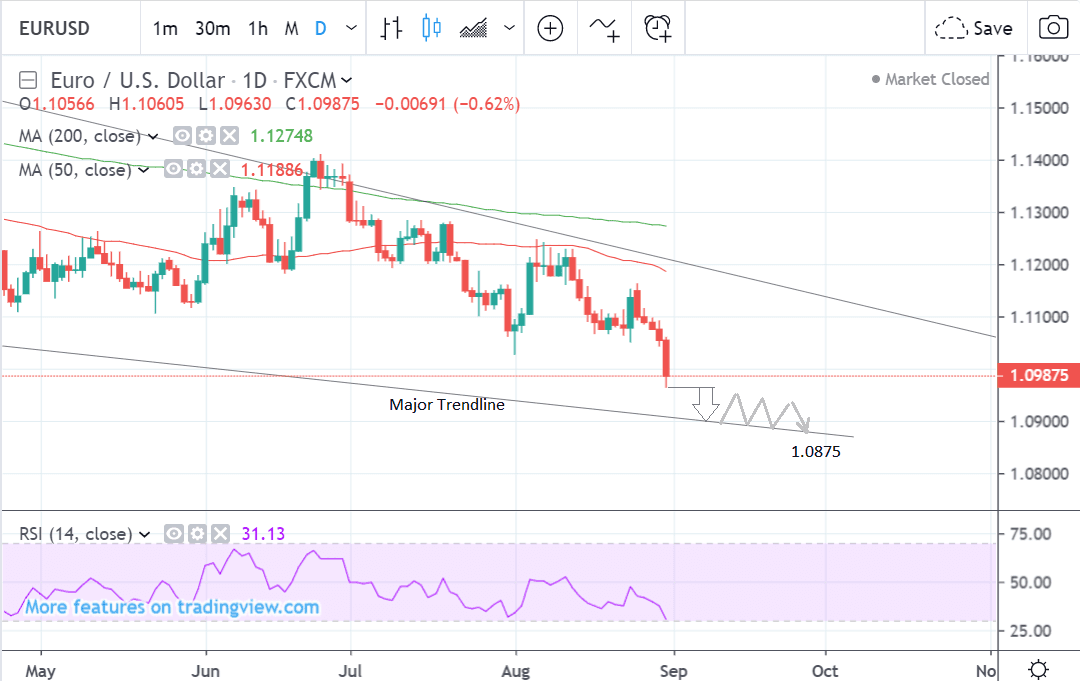 A break below the August 30 lows at 1.0963 would lead to a continuation of the downtrend to the major trendline in the 1.08s and an eventual medium-term target of 1.0875.

The weekly chart - used to give us an idea of the longer-term outlook, which includes the next few months - also shows the pair in a longer-term downtrend which is likely to continue lower. 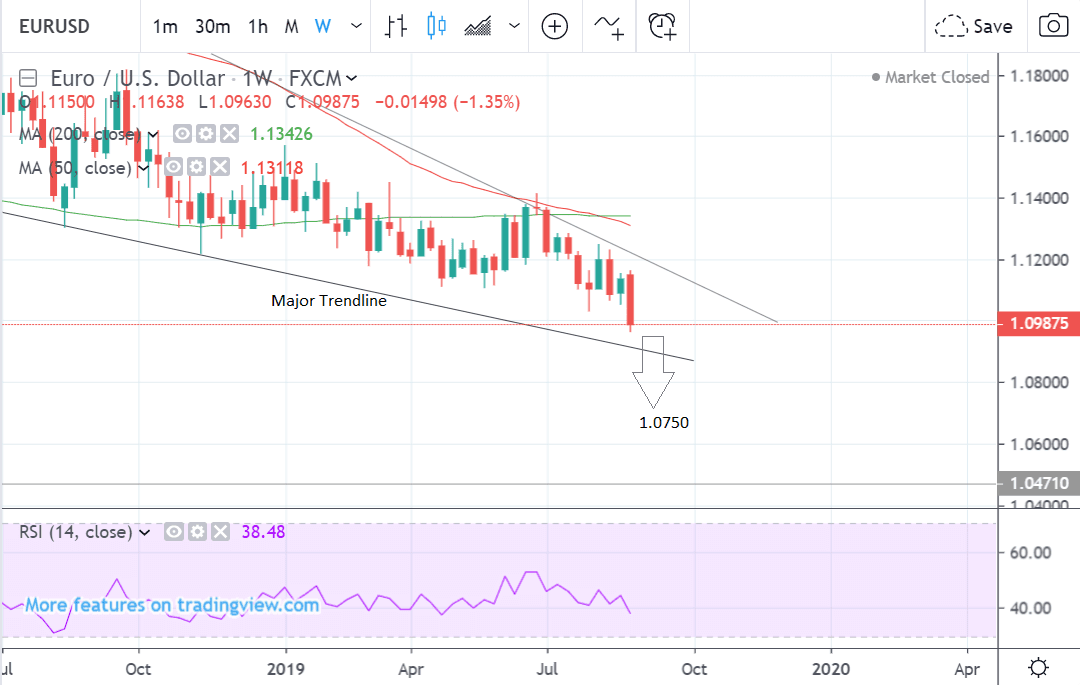 There is even a possibility of a break below the major trendline to a target at 1.0750 over the next couple of months.

One sign the pair may eventually rise further out is the possibility that the pair has formed a ‘falling wedge pattern’, which would be a bullish or positive sign longer-term.

Falling wedges eventually break higher, often with force, but given there are no signs yet of such a breakout this remains merely a speculative scenario.

The main drivers of the Euro in the week ahead are likely to be Eurozone retail sales on Thursday, German data at the end of the week and continued speculation about what the European Central Bank (ECB) is likely to do at its next meeting on September 13, when it is widely expected to begin a new programme of quantitative easing (QE).

The data will be important in the context of the slowdown the Eurozone is currently experiencing, in particular Germany.

German data at the end of the week is likely to either stoke or ease existing fears concerning Europe’s biggest economy.

German factory orders in July are forecast to show a -1.5% fall after a 2.5% rise in the previous month when released on Thursday at 7.00 BST.

German industrial production in July is forecast to show a rise of 0.1% from -1.5% previously when released on Friday at the same time.

In relation to the ECB meeting, the expectation is that the central bank will announce policy support to help stimulate growth in the region. This will probably come in the form of a QE programme.

The ECB is less likely to cut interest rates as these are already very lows and if they are cut any lower they will put more pressure on already struggling Eurozone banks, which would be self-defeating.

“The euro has been drifting lower in the past week and is on track to revisit its 2019 low of $1.1025 in anticipation of a major stimulus announcement by the ECB later in September,” says Raffi Boyadijian, an investment analyst at FX broker XM.com.

The main releases for the U.S. Dollar in the week ahead are the U.S. labour report on Friday, the ISM manufacturing PMI on Tuesday and the trade balance on Wednesday.

The labour report includes non-farm payrolls, which are forecast to have risen by 159k in August, little changed from the 164k in July, and relatively strong. The unemployment rate is forecast to remain at a historically low level of 3.7%.

The report also includes average earnings, which are forecast to show a rise of 3.1% in August when the data is released at 13.30 BST on Friday. This would be marginally below July’s 3.2%.

Since labour market data is seen as the most sensitive to the state of the economy any dramatic swings higher or lower will impact on the U.S. Dollar. Higher payrolls or wages will strengthen the currency and vice versa if they are lower.

The ISM manufacturing PMI is expected to show a fall to 51.0 from 51.2 when it is released at 15.00 on Tuesday. The metric is seen as a key gauge of the country’s economic well-being so a higher-than-expected result would be likely to support the Dollar and the opposite if the result is lower.

The trade balance is the third major release and it is forecast to show a $-53.5bn deficit in July when the data is published at 13.30 on Wednesday. This would represent a narrowing of the trade deficit from the -55.2bn of June.

The trade data will be of interest to investors as it provides clues as to how the trade war is impacting on the U.S. Part of the rationale for raising tariffs on Chinese goods was to reduce the trade deficit, which has not happened.

This suggests the U.S. is highly unlikely to remove tariffs yet. Without a removal of tariffs it is unlikely the Chinese will agree to a trade deal and tensions are likely to continue between the two superpowers.

A deep trade deficit tends to put pressure on the currency both because it needs to fall to right the imbalance in trade and because it impacts negatively on economic growth.