- Likely to be a precursor to more upside

- Euro to be driven by ZEW; Dollar by CPI

The Euro-to-Dollar exchange rate is trading at around 1.1209 on Monday, having risen 0.83% in the week before.

Studies of the charts are showing a bullish reversal taking place which should see the pair strengthen in the week ahead.

The 4-hour chart - used to determine the short-term outlook, which includes the coming week or next 5 days - shows the pair going sideways in a range after a rally off of the early August lows. 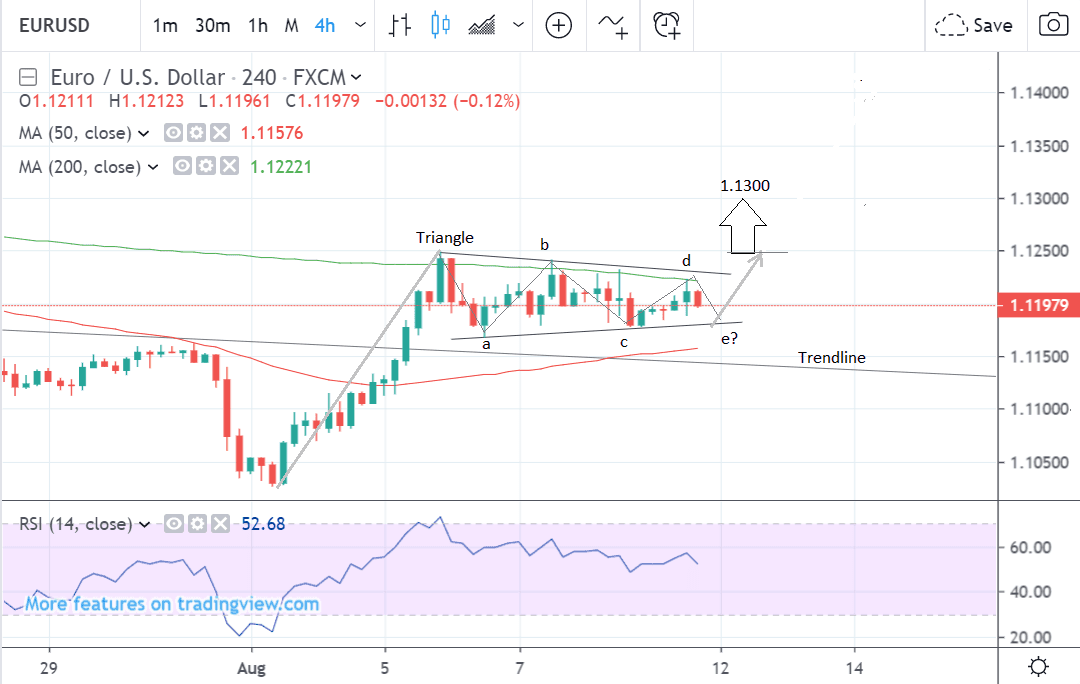 This sideways trend is probably a triangle-type formation which will probably lead to an eventual break higher to a target at 1.1300 and the 200-day moving average (MA) whereupon it is likely to pull-back due to selling pressure from technical traders preempting the correction.

This breakout higher might happen quite quickly since the sideways move or triangle has probably almost finished. Usually, these ranges are composed of five component waves (labeled a-e) and the current pattern is made up of 4 so far, suggesting it may have only one more before it completes.

The daily chart shows how the pair has risen up from the early August lows and then traded sideways in a triangle or pennant pattern during its range-bound sideways period. 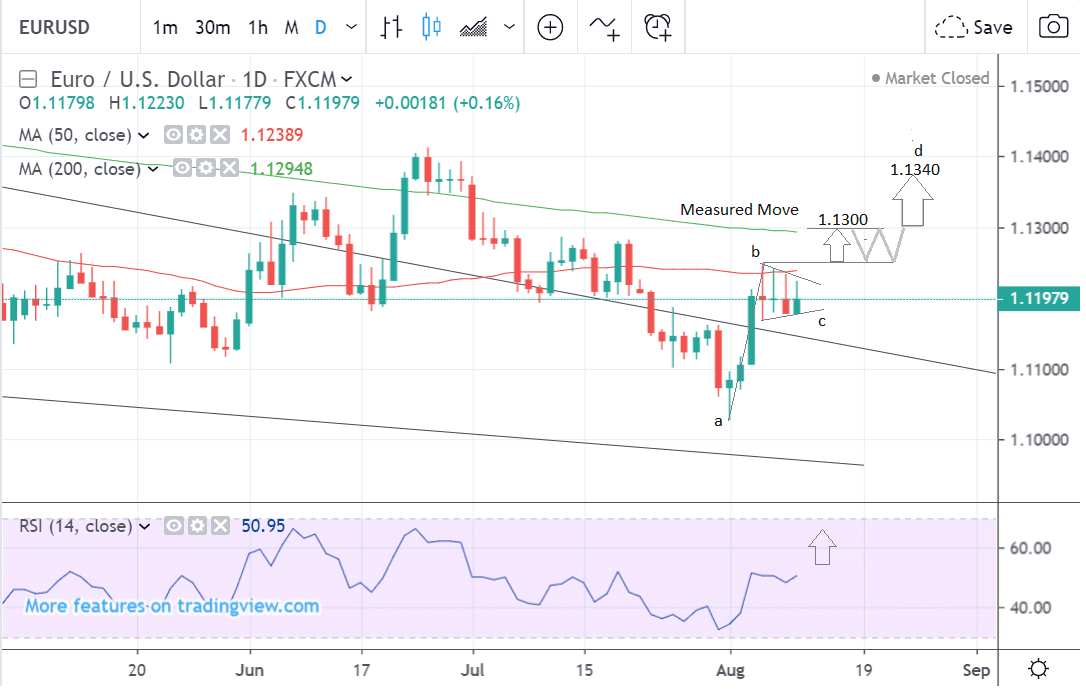 This is likely the midpoint of a measured move higher. Measured moves are three-wave patterns and the final wave can often be forecast by extrapolating the length of the first wave, such that a-b equals c-d.

This would actually suggest a move all the way up to 1.1400, however, we do not see this as so certain since there are two large MAs from the weekly chart in the 1.1340s which are likely to impede upside progress for the pair.

The RSI momentum indicator also looks constructive and much more likely to rise than fall. This reinforces the likelihood of a continuation higher happening.

The weekly chart - used to give us an idea of the longer-term outlook, which includes the next few months - shows how the pair is showing reversal potential after forming a Japanese hammer candlestick reversal pattern (circled), which is a sign the trend may be about to reverse, especially in the short or medium term. 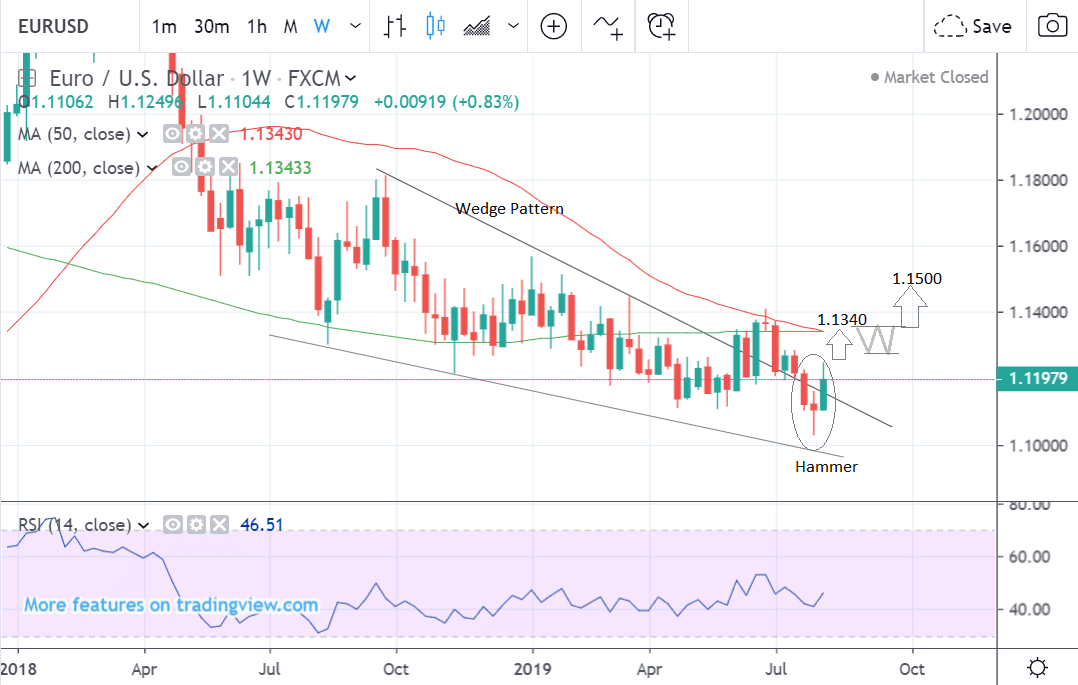 The 50 and 200 MAs are converging at the 1.1340 level and likely to act as a barrier to further upside but they will probably eventually be broken in the long-term, and the next target higher is 1.1500, which is a major round number and therefore more likely to attract supply from traders choosing the level as a good place to close their bullish bets and take profit.

The Euro: Industrial Production and German Sentimenrt in Focus

The main economic data releases for the Euro in the week ahead is industrial production on Wednesday and the ZEW economic sentiment index out on Tuesday.

Eurozone industrial production is forecast to show a -1.4% decline compared to a month ago in June when it is released on Wednesday at 10.00 BST; this would mark a substantial slowdown from May when it grew by 0.9%.

Industrial production is an indicator of growth and impacts on GDP expectations. There is a risk it could be lower-than-expected given the general backdrop of a slowing global economy, and if so the Euro is likely to weaken - if higher than expected, it could recover.

The other key data release is the ZEW economic sentiment index, which is a survey-based indicator often cited as a reliable leading indicator of broader growth.

The ZEW is forecast to fall to -21.7 in August from -20.3 in July. This would signal a more pessimistic mood amongst the financial professionals interviewed for the survey and probably slower growth in the future.

The U.S. Dollar: Inflation and Retail Data in Focus

The main economic data releases for the U.S. Dollar in the coming week are inflation and retail sales data out on Tuesday and Thursday respectively.

Inflation data is forecast to show a quicker 0.3% rise in July after 0.1% in June, and a 0.2% rise for core inflation which leaves out volatile food and fuel components, when it is released at 13.30 BST on Tuesday.

There is a risk inflation could undershoot expectations due to oil price volatility, and an over exaggeration of the potential impact of increased tariffs on Chinese imports, according to analysts at U.S. bank Wells Fargo.

Lower inflation is negative for the Dollar as it reduces interest rate expectations which attract greater inflows of foreign capital when they are higher.

“Energy prices declined in May and June, leading to back-to-back, modest 0.1% increases in headline CPI following more substantial gains in the prior three months. Core consumer prices showed some signs of life in June, rising 0.3% on the month, breaking a string of 0.1% gains during the past four months. That being said, the inflation backdrop remains tame as we look ahead to the second half of the year,” says Wells Fargo.

Wells Fargo economists estimate the latest round of tariffs would add a little over 0.1 percentage points to the year-over-year rate of CPI inflation. This relatively small increase is largely because goods make up only a fraction of the CPI.”

The other main release for the Dollar is retail sales which is forecast to show a 0.3% rise in July from 0.4% rise in the previous month, when it is released at 13.30 on Thursday.

Retail sales should remain buoyant as long as the labour market remains strong:

“Aside from a decline in February, retail sales have increased every month so far this year. That’s consistent with the elevated confidence data and suggests consumers remain comfortable with their spending habits despite increased risks to the outlook,” says Wells Fargo.

The data will impact on the U.S. Dollar if it changes interest rate expectations materially. Lower rates would be negative for the Dollar as they would reduce foreign capital inflows.

Currently, the market is expecting the Federal Reserve (Fed) to cut rates lower than is justified, according to Marios Hadryiacos, an investment analyst at broker XM.com.

“We have seen bets on lower interest rates in September soar... A 25 basis points rate cut is fully priced in. Very similar to the July meeting we also have some expectations for a 50 basis points more aggressive rate cut. I believe the Fed is only likely to cut by 25 again, and the conditions are very similar to what happened in July,” says Hadryiacos in a week ahead preview.

“We have seen some of the most dovish Fed members come out and say maybe we should wait a little and see the effects of the latest rate cut, we shouldn’t rush it, so they very well might cut but I very much doubt it will be by 50 basis points. Now what does that mean for the Dollar? Market pricing is essentially overly dovish at the moment. So if we see Fed officials push back against this over dovishness by the market in coming weeks, that could help the Dollar to recover a little bit, at least in the near term,” he adds.