The Euro-to-Dollar rate is set to begin trading around 1.1220 at the start of the new week after gaining half a percent by last Friday's close, although the charts argue for more range-bound trading from the single currency in the days ahead.

The 4 hour chart, which we use to determine the short-term outlook including the next 5 days, shows how the pair has formed a range since the start of July with a very clear floor and ceiling at 1.1195 and 1.1290 respectively. There is a good chance the pair could continue in this range over the short-term.

Of course, there is also a chance of a breakout. A break above the range highs would probably see the pair rise up to an upside target at 1.1340, while a clear break beneath the lows would augur a move down to the 1.1135 area.

These targets are based on an extrapolation of 61.8% of the height of the range, which is our usual method for generating breakout targets. 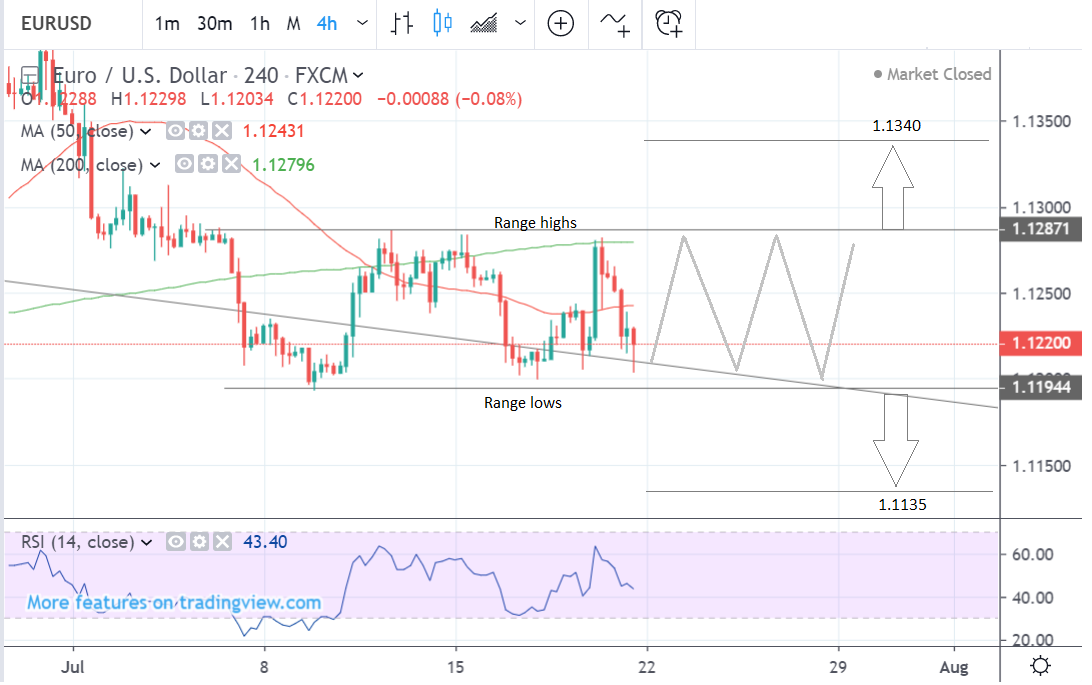 The daily chart, which we use to give us an indication of the outlook for the medium-term including the next month ahead, shows the same sideways trend as on the 4-hour chart only our analysis produces longer-term targets.

The Euro continues to trade along the upper borderline of a falling channel or wedge pattern it broke out of earlier on in May and June. If it can stay above the line then bullish momentum will build. 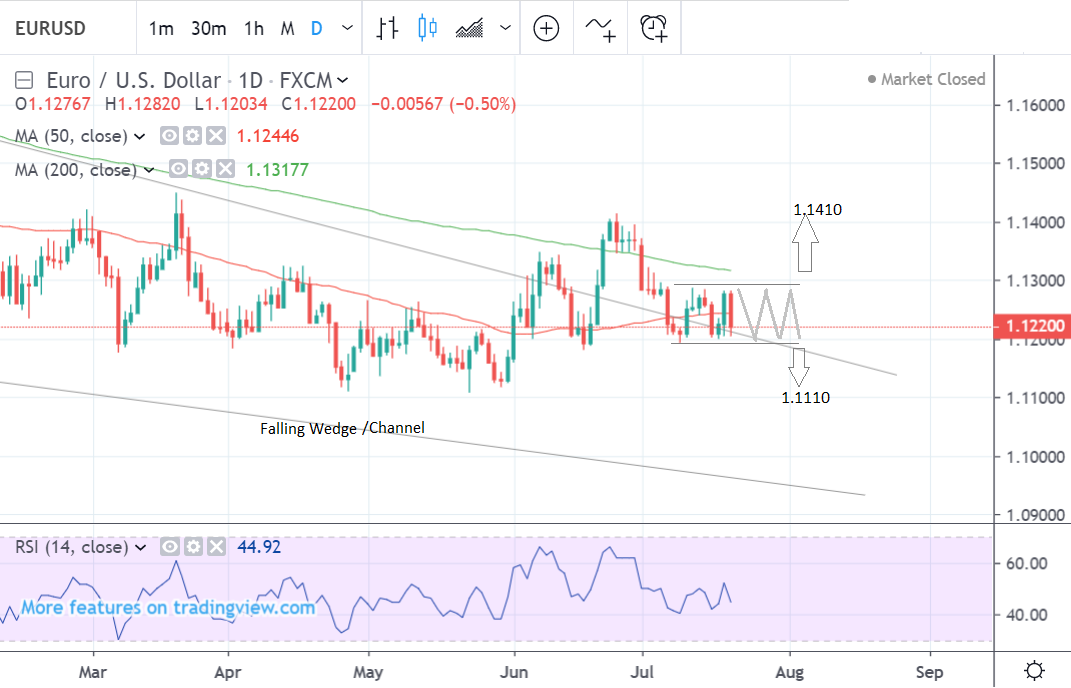 The weekly chart, which we use to give us an indication of the longer-term outlook which includes the next few months, shows the pair in a falling wedge pattern at the end of a downtrend. This is usually a bullish sign.

We think that even if the pair were to fall back down to the 1.1110 lows in the short or medium-term, it would probably rebound thereafter. The long-term bullish convergence (which happens when price makes new lows but relative-strength-indicator does not), as well as the formation of the wedge pattern points to the downtrend ending.

The first target for recovery is 1.1340 where the 50 and 200-week moving-averages are located. Here the pair is likely to stall temporarily as the two averages will likely draw opportunistic selling but when the uptrend resumes, we think it could eventually take the Euro up to 1.1500. 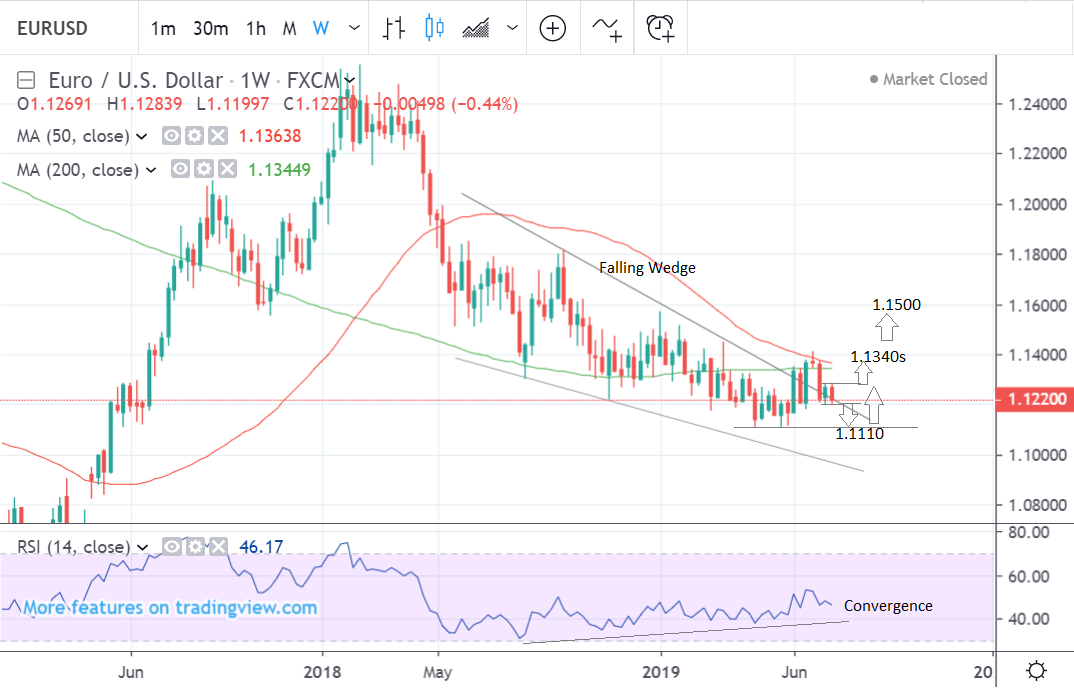 The Euro has quite a busy week ahead, with the European Central Bank (ECB) interest rate decision on Thursday the most important event. But preliminary readings for the July PMIs out on Wednesday and the ECB’s bank lending survey on Tuesday are also important.

June inflation came out marginally better-than-expected at 1.3%, and 1.1% for core, but markets are now pricing in more-than a 50% chance the ECB will cut its interest rate on Thursday. This could still weigh on the Euro throughout the week because the cut is not yet fully priced-in.

In other words, a rate cut from the ECB this week could lend more support to the Pound-to-Euro rate in the days ahead. Consensus is for the July manufacturing PMI to sit unchanged at 47.6 and for the services PMI to slip from53.6 to 53.3 when the data is released on Wednesday at 9.00 BST.

“The Eurozone’s composite PMI – seen as a strong indicator of GDP growth – has been inching higher in recent months on the back of an improving services sector. However, the manufacturing PMI has been stuck in negative territory, weighed by increased trade and Brexit uncertainty. There are concerns that the manufacturing weakness could soon spill over into the broader economy,” says Raffi Boyadijian, an analyst at XM.com.

Finally, the ECB bank lending survey out on Tuesday at 9.00 may be another focus of interest for investors since an uptick in lending will be key to any continental economic recovery. If the survey shows a fall it will be another sign that growth is under threat, and a red flag for the ECB.

The main event in the week ahead for the Dollar is second quarter GDP data, which is forecast to show the economy growing at an annualised pace of 1.8%, down from 3.1% in the opening quarter of the year.

The data is due out at 13.30 London time Friday and the result is likely to influence the Federal Reserve (Fed) as U.S. policymakers deliberate over whether the economy needs an ‘insurance’ rate cut to help support growth or not. A lower-than-expected result would ring alarm bells for the economy. 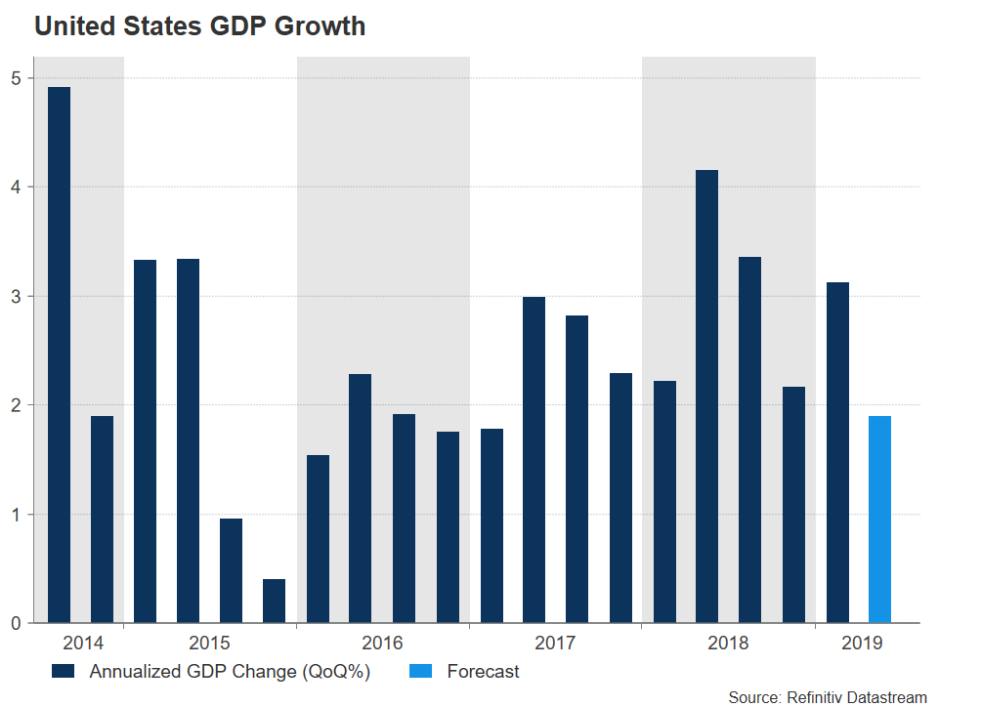 A rate cut should hurt the Dollar in theory although the move has long been expected by the market so the currency response will be dictated largely by the Fed's guidance on future policy actions. Any hints of further rate cuts to come later in the year could weigh on the Dollar.

Housing data could also be key to the interest rate outlook given the impact that changes enacted by the Fed have on the mortgage market. Existing home sales are expected to have risen 0.2% in June when they are released on Tuesday at 15:00 London time.

New home sales are forecast to have risen 6.6% in June compared to a month ago when released on Wednesday at 15:00. This would be a considerable turnaround from the negative figure in May although the series does tend to be quite volatile.

The house price index for May is seen rising 0.3% compared to the previous month when the data is out at 14:00 Tuesday.

“The housing market will fall under the spotlight amid signs of renewed weakness in the sector...Data released in the past week showed housing starts declined in June, while building permits fell to a two-year low. More poor numbers on housing would strengthen the argument for bold policy action in July,” says Raffi Boyadijian, an economist at broker XM.com.

Manufacturing, services and composite PMIs for July are forecast to show rises when they are released at 14:45 Wednesday. The manufacturing PMI is expected to have risen to 50.9, from 50.6 previously, and services index is seen rising from 51.5 to 51.6. PMI’s are reliable indicators of growth so they will be watched closely by the market.

The Euro-to-Dollar rate extended its nascent rebound Tuesday but was had lost momentum and was floundering in a battle to overcome nearby technical obstacles, as tensions between the U.S. and China festered and Monday's Franco-German recovery fund idea looked set to hit a snag