- But it's all down hill from there as the ECB is set to cut rates three times.

- Barclays forecasts rhyme with HSBC outlook for EUR to do heavy lifting.

The Euro-Dollar rate can rise further throughout the summer of 2019 as market pessimism about the Federal Reserve (Fed) interest rate outlook reaches fever pitch, according to forecasts from Barclays, although the bank says the single currency could face steep losses in 2020 and beyond.

Europe's unified unit softened against the Dollar on Tuesday following a week of solid gains but it won't be long before the currency is on its front foot again, Barclays suggests, because the Federal Reserve is likely to indulge financial markets with three U.S. interest rate cuts before the end of September.

Fed officials hinted strongly last week they're on the verge of indulging the market, which in recent months has bet increasingly the central bank will cut borrowing costs for companies and consumers dramatically this year.

"We see scope for further, limited EUR gains, consistent with our analysis of USD performance during Fed cutting cycles," says Marvin Barth, head of FX strategy at Barclays. "We expect the Fed’s pre-emptive cuts to temporarily weigh on the USD, especially vs. G10 currencies, as the US rates advantage compresses amid an environment of slowing global growth."

Since last Wednesday a strong consensus has emerged among analysts that suggests the Fed will cut rates at least twice this year, likely leaving the Fed Funds rate range at the 1.75%-to-2% level. Although Barth and the Barclays team are looking for the Fed to go further than that.

This has already undermined the Dollar, which had risen more than 3% in broad terms during the year to last Wednesday but is now up only 1.8% for that period, but most analysts are forecasting even more losses this year and beyond. Barclays has other ideas about the Dollar outlook though.

Changes in interest rates impact currencies through the influence they have over capital flows and short-term speculators. They're only normally made in response to movements in inflation, which is sensitive to economic growth. 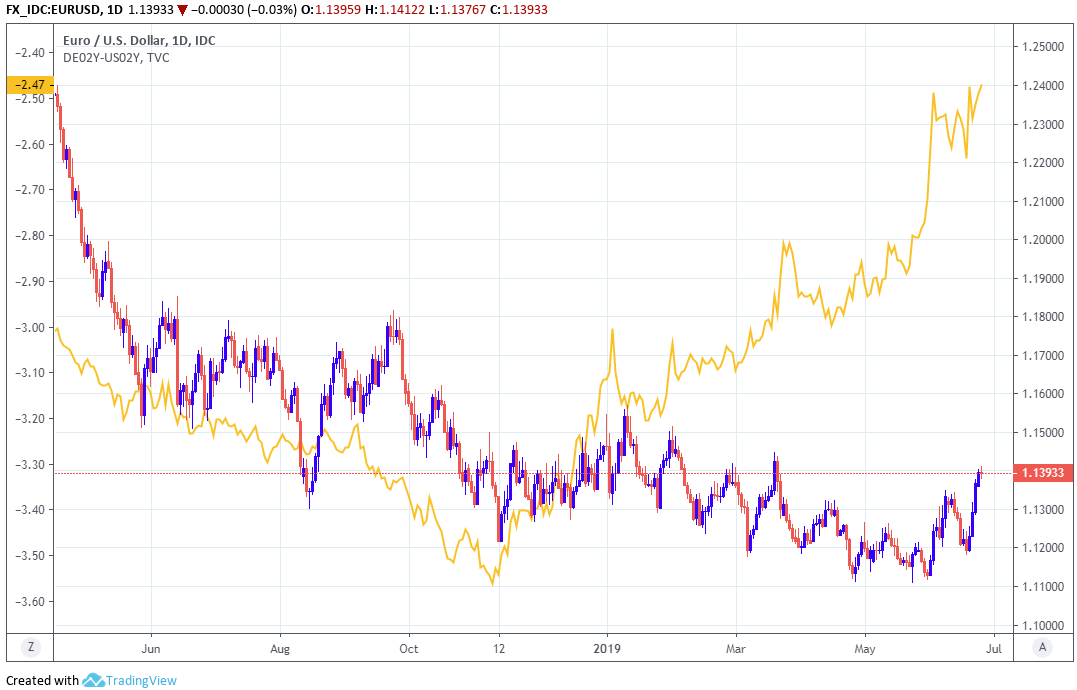 "The Fed’s ability to support an extended US expansion stands in contrast to clear sustained slowing – and rising risks – in China and Europe, implying a USD rebound in 2020," Barth writes, in the bank's latest review of currency markets. "The Fed has more degrees of freedom and will likely succeed in stimulating the US economy next year. In contrast, while more ECB easing is likely on its way, we doubt it will have a meaningful impact on growth."

Rate cuts are on the agenda in the U.S. and elsewhere in part because of the damage done to the global economy by President Donald Trump's trade war with China, which crippled Eurozone economic growth last year but is only now beginning to threaten the U.S. outlook.

President Trump has been threatening to impose a 25% tariff on the remaining $300bn of China's annual exports to the U.S. if his counterpart does not agree to sign up to a deal that Chinese negotiators previously backed out of.

Both U.S. and Chinese leaders will meet at this week's G20 summit in Osaka, Japan, to discuss the latter's "unfair" trade policies but scepticism about the prospects of a lasting detente is high going into the event.

"We expect only a shallow and short-lived EUR rally in Q3 and broad depreciation thereafter, with EURUSD breaking 1.10 and re-testing previous cycle lows over our forecast horizon. A constrained ECB, decelerating EA growth and the bloc’s high vulnerability to escalating US-China trade tensions are the primary drivers of our bearish EUR view," Barth says. 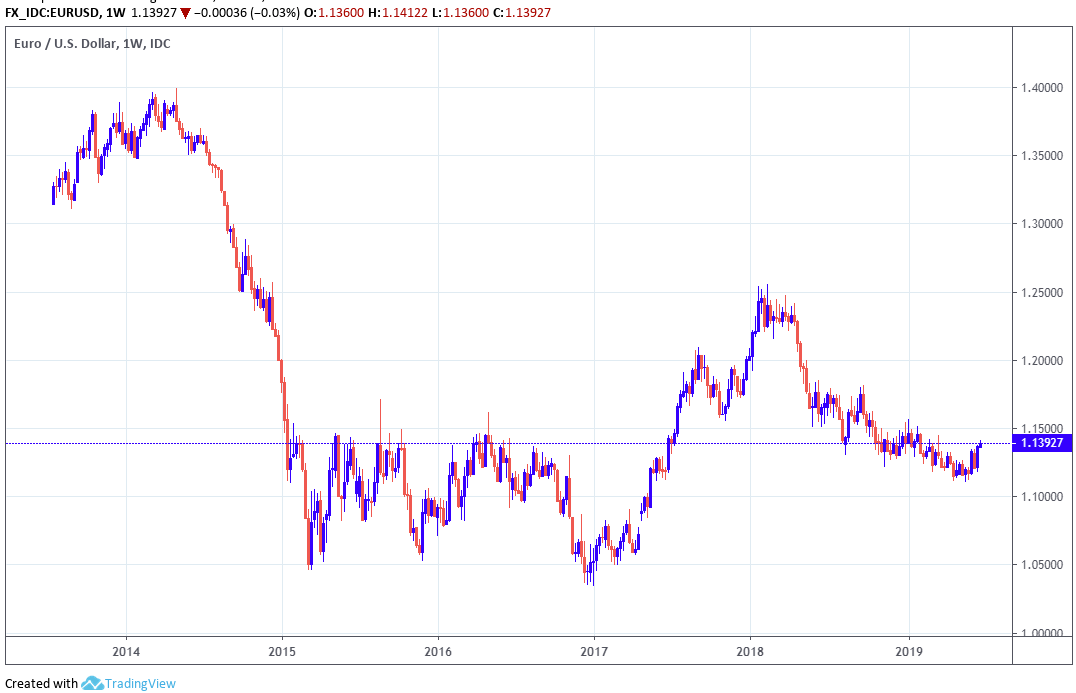 Barclays forecasts the Euro will trade around its Tuesday level of 1.14 until the end of the third quarter, at which point it's all down hill from there for Europe's single currency. The bearish medium-term outlook is due to the downbeat prospects of the Eurozone economy, which is facing a litany of headwinds.

However, the total reduction envisaged for the European Central Bank deposit rate across those three cuts is just -30 basis points, which pales into insignificance when compared with the 75 basis points of cuts expected from the Fed but would leave the benchmark deep in negative territory at -0.60%.

"Tail risks, including possible US tariffs on EU autos, a no-deal Brexit and fiscal sustainability concerns related to Italy, skew the risks of our forecasts to the downside," Barth warns.

The wide gap between rate cuts expected on either side of the Atlantic speaks to the bind the European Central Bank now finds itself in. Europe's economy is weaker and facing a much greater number of risks than that of the U.S., but its central bank has all but run out of bullets to fight the next crisis with.

This is why Barclays says that, after dropping to 1.11 in time for year-end, the Euro will fall to 1.06 against the Dollar by the end of June 2020. HSBC recently warned that with rates already in negative territory and the ECB now out of bullets, the Euro currency will have to do the heavy lifting. 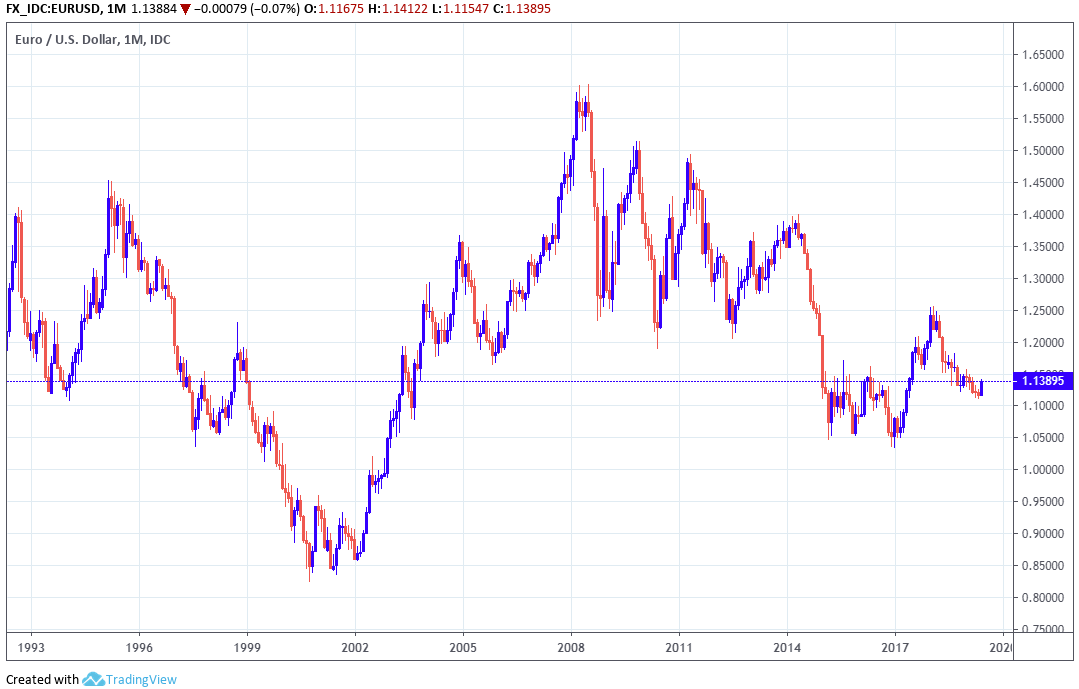 "Rates in Europe are effectively at the zero bound, leaving limited monetary policy flexibility," says HSBC's Dominic Bunning. "We argue any loosening of Eurozone monetary conditions may have to come through the currency."

What matters most for central bank interest rate decisions is the outlook for inflation but policymakers watch the ebb and flow of growth data closely because economic demand is an important driver of consumer price pressures.

And the important core measure of Eurozone inflation has not been above 1.3% since a long time before the European Central Bank unveiled in January 2015 a mammoth programme of interest rate cuts and quantitative easing designed to lift the consumer price index to the target of "close to but below 2%".

Meanwhile, surveys have suggested strongly that Europe's economy turned lower again at the start of the second quarter, after growth picked up from 0.2% to 0.4% in the first three months of the year. Germany's Ifo Institute was the latest to sound the alarm bell on the Eurozone economic outlook Monday.

"While many will no doubt highlight the big swing in yield differentials as being EUR supportive, we believe this represents something of a structural shift, with EUR downside likely to continue regardless," Bunning writes. "We remain USD bulls, a stance we have held since April 2018. We see EUR-USD drifting to 1.10 through the course of this year."