- Euro to be driven by sentiment data

The Euro-to-Dollar exchange rate is trading at 1.1139 at the start of the new week after falling about 0.9% in the week before.

The U.S. Dollar remains an outperformer in global FX with investors noting the U.S. economy continues to firmly outperform global rivals, a view confirmed by last week's knock-out GDP data. The Euro is meanwhile hampered by the Eurozone's seemingly entrenched economic underperformance, with traders expressing disappointment that the region's largest economy - Germany - has yet to shown signs that it is making a concrete turnaround.

The Euro has other risk factors to weigh, including concerns about the threat of U.S. tariffs on the European auto industry, uncertainty ahead of EU and Spanish elections.

For EUR/USD, the technical picture is now decidedly bearish after last week's declines. The pair continued to fall within the descending channel after briefly touching the upper borderline. It will probably continue some more in the absence of any signs to the contrary. There is still some ground to cover before it hits more substantial support at the lower channel line at 1.1075. 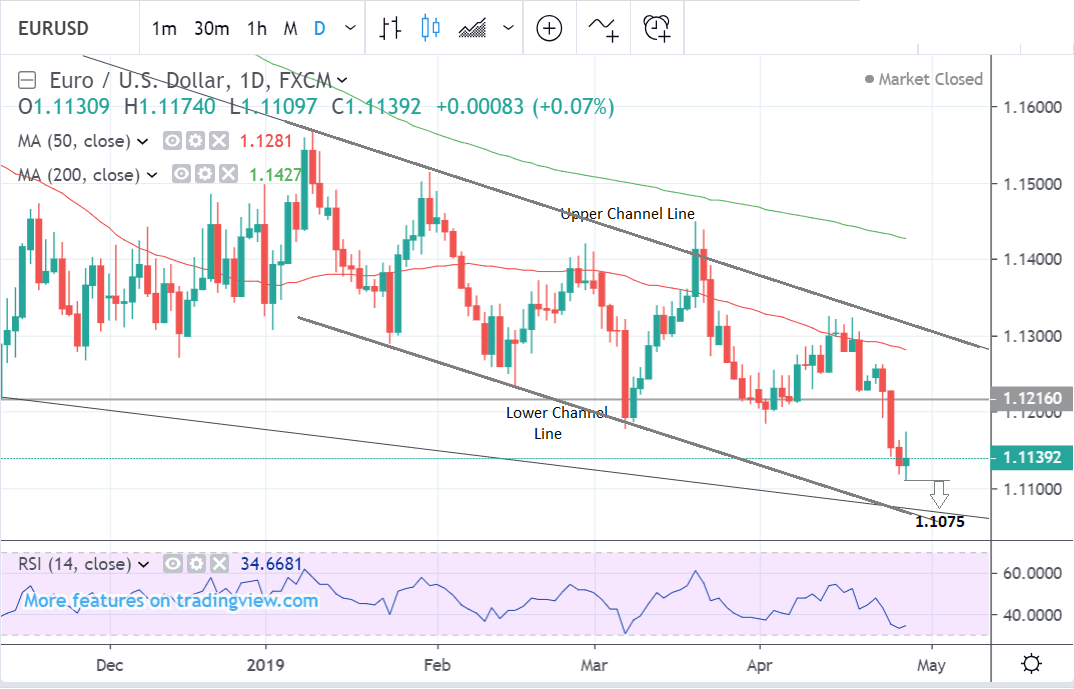 A break below 1.1109 would probably confirm an extension down towards the next target at the 1.1075.

Viewed on the 4hr time frame the most recent tranche of market action shows a bearish sequence of lower highs and lower lows, which indicates the onset of a short-term downtrend. This is one of the first signs analysts look for to determine trend; which is expected to extend. 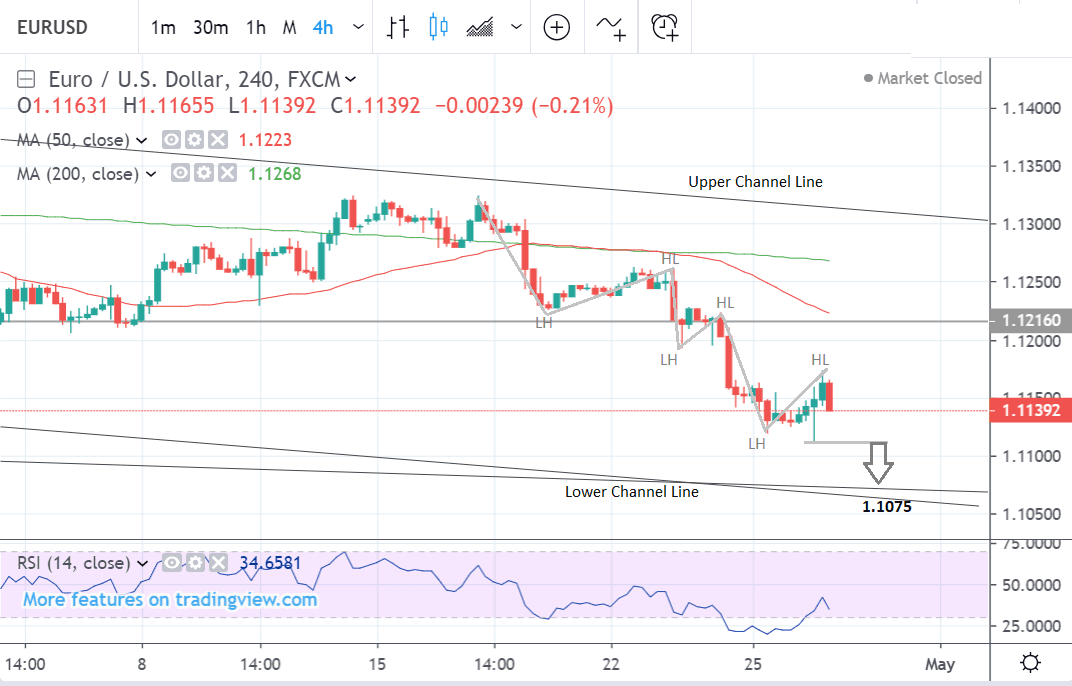 The weekly chart shows how the pair remains stuck below the 200-week moving average (MA) - a pivotal support and resistance level for the pair. This provides a tough glass ceiling limiting gains. 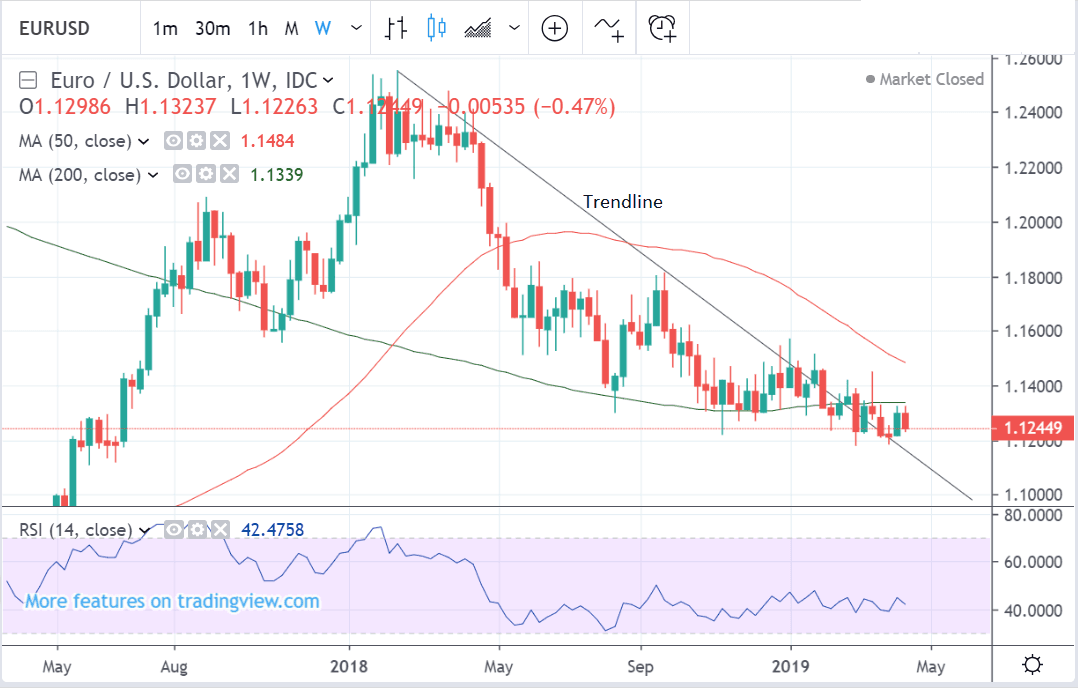 Momentum, as measured by the RSI indicator, has turned bearish again and is pointing lower in line with last week’s capitulation.

The main event for the Euro in the week ahead is the preliminary estimate of GDP growth on Tuesday at 10.00 BST.

Those expecting a result in line with those of the U.S. and China, which both showed strong upside surprises recently, may be in for a disappointment. Growth in the Eurozone is not forecast to rise at the same rate.

“A worse figure such as no growth during the period would deepen the pessimism for the Eurozone economy,” says Raffi Boyadijian, an economist at FX broker XM.com.

Business confidence data out on Monday at 10.00 is a key release for the Euro. It is expected to come out at 0.49 from 0.53 previously.

Eurozone March unemployment is expected to remain unchanged at 7.8% when it is released at 10.00, on Tuesday. Employment has been a relative strength for the Eurozone so a deterioration would deepen concerns about the region.

The flash inflation reading for April will be released on Friday, along with March producer prices. Inflation is expected to rise to 1.6% and 1.1% for broad and core readings, up from 1.4% and 0.8% respectively.

Inflation informs the level the European Central Bank (ECB) sets interest rates at which has a significant impact on the Euro. Higher interest rates or the expectation thereof tends to support the Euro whilst vice-versa for lower rates.

“A combination of disappointing GDP and inflation prints would be the worst outcome for the euro, which crumbled below its key support around $1.1180 this week,” says Boyadijian.

It is a busy week for the Dollar with much data scheduled that could be market moving. The daddy of them all, however, is likely to be the Federal Reserve (Fed) meeting on Wednesday at 19.00 BST. Here the big question will be whether the Fed will still retains its ‘cautious’ tone or opts to be more optimistic after the huge GDP beat in Q1.

Analysts at Wells Fargo argue Q1 GDP data was not as good as it looked and that the Fed will, therefore, probably remain in ‘cautious’ mode.

Their argument is that GDP data seemed higher because of inventory build-ups whilst the real motor of growth, consumerism, remained relatively subdued.

“Although the economy may not have been as strong in Q1 as the headline GDP growth rate suggests, the economy is not in danger of stalling anytime soon. That said, this week’s data support our expectation for the Fed to refrain from raising rates for the foreseeable future,” says Wells Fargo.

The other main releases on the calendar are inflation data, in the form of the Personal Consumption Expenditure report (PCE) on Monday, the Non-Farm Payrolls job report on Friday; and in between, and the ISM Manufacturing report on Wednesday.

Non-Farm Payrolls in April are forecast to show a 181k rise from 196k in March when released on Friday at 13.30. This would be in keeping with about the long-term average and probably not impact the Dollar overly.

Average earnings are more likely to impact the currency if they show a big move up or down, however, economists have forecast little change, up a basis point to 3.3% year-on-year and two basis points to 0.3% month-on-month, in April.

The core PCE price index (the Fed’s preferred inflation measure) will likely underscore the muted inflation picture as it’s expected to have moderated slightly from 1.8% year-on-year in February to 1.7% in March. Personal income and spending figures are also out on Monday. Both are forecast to have accelerated in March. The data is scheduled for release at 13.30.

The ISM manufacturing PMI for April will be closely watched on Wednesday at 15.00 when it is expected to show a decline to 55.0 from 55.3 previously. This follows an unexpected rebound in March.