- But economy not out of woods yet, signs of life not enough for recovery.

- As rest-of-world fundamentals deteriorate quicker than those over in U.S.

The Euro bounced off the floor of a narrow six-month range on Wednesday after two economic reports surprised on the upside, but earlier and subsequent analyst commentaries suggest that mere signs of life in the economy are unlikely to be enough sustain a recovery in the Euro-to-Dollar rate.

Eurozone services sector activity was stronger than previously thought during February, IHS Markit said Wednesday, which prompte an upward revision to the bloc's services PMI which now sits at 53.3. The PMI was previously reported at 52.7 but the revision puts it at the highest level since October 2018.

Meanwhile, retail sales rose by 0.4% in February when markets had been looking for only a 0.2% increase. However, the previous month's figure was revised down to 0.9%, from 1.3% initially, which means growth in the two-month period was actually slightly less than markets had anticipated. Still though, economists cheered the figures.

"Retail sales increased by 0.4% in February and the services and composite PMI for March came in stronger than expected, providing further evidence decent service sector performance is keeping the eurozone economy afloat," says Bert Colijn, an economist at ING Group. "Over the past few months, confidence among retailers in the eurozone has also been on the rise again, showing that the concerns in the industrial sector aren't necessarily spilling over to the consumer market, for now at least."

The Euro was quoted 0.30% higher at 1.1236 during noon trading Wednesday, after lifting decisively off the 1.12 level that marks the floor of its six-month range in the morning session. 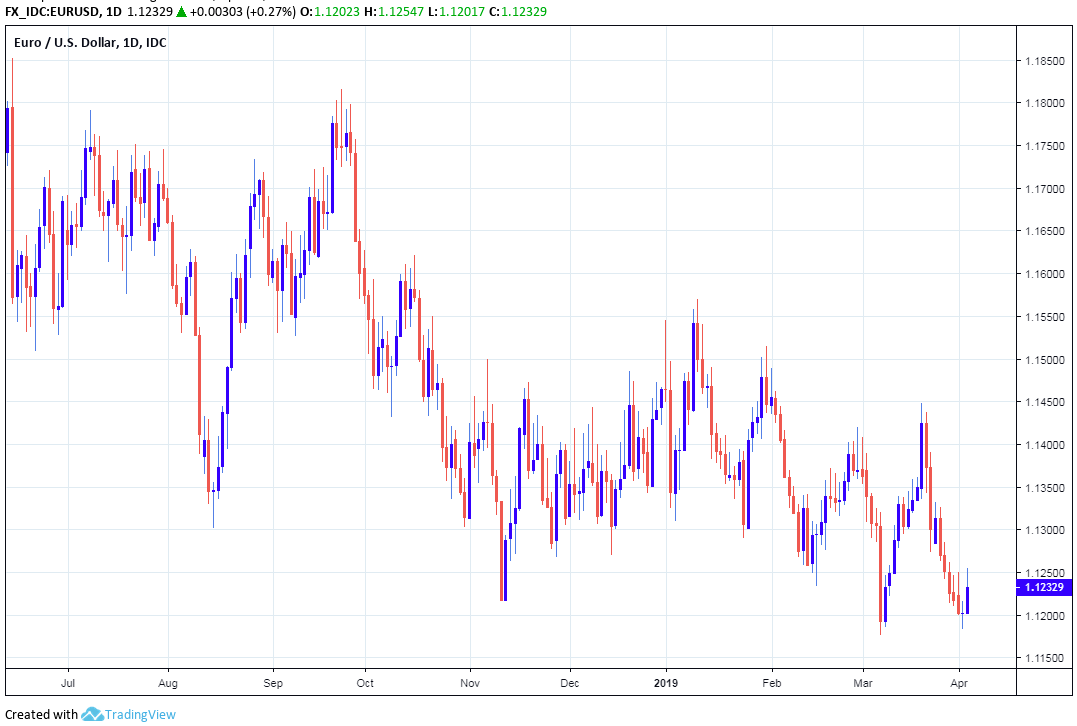 The Euro it's still down nearly 2% for 2019 though, after dropping close to 5% last year, following a weak performance from the economy that led GDP growth to fall sharply in the second-half of the year. The U.S. trade war with China was seen behind the damage to the bloc's manufacturing sector.

However, and despite the recessionary conditions factories have been operating under these recent months, the services sector has held up well. But that wasn't enough to prevent the European Central Bank (ECB) abandoning its plans to lift its interest rate later this year. That will have consequences for the market's appetite for the currency.

Meanwhile, the Federal Reserve (Fed) has as good as told markets that it will not be lifting its interest rate this year, prompting speculation of rate cuts before year-end. This led some to conclude that a Euro-to-Dollar rate recovery was just around the corner however, there is good reason to think such a thing could still be a while away.

"We see the outlook for the EUR as being marred by expectations of further ECB policy support, concerns about the how the banking sector will withstand a potentially prolonged period of negative rates and the possibility of a negative political headwinds," says Jane Foley, a strategist at Rabobank. " We see risk of EUR/USD dipping to 1.10 on a 6 month view."

Foley says the Eurozone is facing a prolongued period of negative interest rates, as well as a series of political risks that could impact the currency this year. Those risks include Brexit and the European parliament elections in May that could see a large contingent of 'far left' and 'far right' representatives dispatched to Brussels.

It's negative interest rates that could turn out to be what matters most to the Euro over the coming months, because rates are still negative at what could potentially be the end of the current global economic cycle. In other words, there's a chance Eurozone rates may need to go lower still, before they rise again.

Meanwhile, interest rates over in the U.S. are now more than 250 basis points higher than they are in the Eurozone. The Federal Funds rate range is currently set between 2.25% and 2.5%, whereas the ECB deposit rate is -0.4% and its minimum bid rate 0%.

Relative interest rates matter to financial markets because rational investors always seek the most favourable returns and that results in capital flowing toward currencies that have higher interest rates relative to others.

"In a period in which the odds of a US recession and the likelihood of lower rates from the Fed have been much discussed, it might seem unusual to be presenting arguments in favor of broadbased USD strength," Rabobank's Foley writes, in a note to clients. "Our view that the USD is set to remain well supported this year is based on the expectation that the fundamentals of other currencies will deteriorate quicker than those of the USD."