- Incoming economic data and March ECB meeting are key as ever.

The Euro was resilient Thursday even after official data confirmed the economy has shifted into a lower gear during recent months, although it remains to be seen whether the currency can remain afloat because there could be more bad news to come during the weeks ahead.

Eurozone GDP rose by just 0.2% for a second consecutive quarter during the final three months of 2018, in line with the recent consensus but defying earlier forecasts for a rebound in the pace of economic activity into year-end.

That means the Euro area economy grew by just 1.8% in 2018, down sharply from 2.3% in 2017, after growth slowed at the beginning of the year and a litany of headwinds further stymied activity during the second half.

"Q4’s GDP growth rate of 0.2%, unchanged from Q3, will do nothing to reassure policymakers about the outlook for the economy this year. We still think growth may recover to a quarterly average of 0.3% this year, but this would still bring the annual growth rate down to only around 1.0%. And the risks to our below-consensus forecasts are increasingly to the downside," warns Andrew Kenningham, chief Europe economist at Capital Economics.

The U.S.-China trade war and a slowdown in the world's second largest economy have been a significant headwind for the mighty Eurozone manufacturing sector. But new EU rules on testing the emissions output of cars and uncertainty over the Brexit process have all also been at play too.

"These data don’t look pretty, but have been well telegraphed by the hard data and the financial market horror show in Q4," says Claus Vistesen, chief Eurozone economist at Pantheon Macroeconomics. "Growth in the Eurozone has now fully reversed the upturn seen during the wonderful days of the #euroboom. We think it will pick up a bit in the short run, but full-year growth in 2019 will slow further, to about 1.2%." 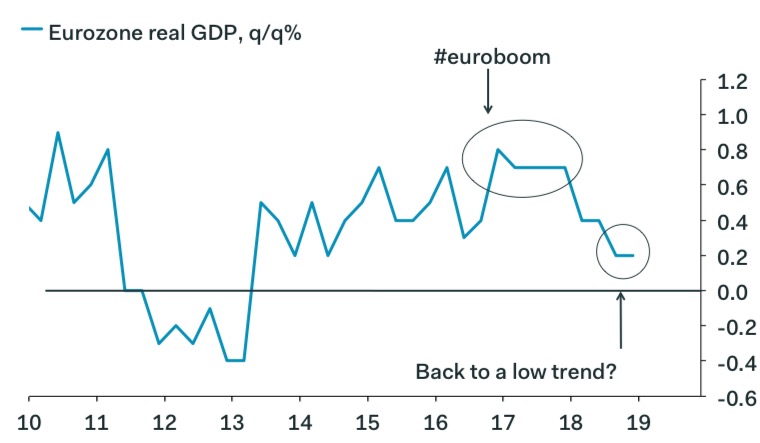 Thursday's GDP data was released amid a flurry of other economic figures that have both positive and negative implications for the growth outlook.

On the upside, the Spanish economy performed much better during the final quarter than analysts had anticipated, while the Eurozone unemployment rate held at a decade-long low of 7.9%.

However, other data showed Italy slipping into recession at the end of 2018 after the economy contracted for two consecutive quarters. GDP fell -0.2% during the period, a steeper decline than the -0.1% consensus had implied.

In addition, and of likely of more concern for economists, German retail sales fell off the edge of a cliff in December to such an extent that November's Black Friday-related gain was more than reversed.

"We had expected a big reversal following the Black Friday bump in the November data, but this headline is horrible, indicating that the German consumer hit a brick wall at the end of 2018," says Pantheon's Vistesen.

German retail sales were down -4.3% in December, more than unwinding a stellar 1.4% gain seen in the prior month, although Destatis said little about what parts of the retail sector were impacted the most.

Sales data are important because after the German economy contracted in the third-quarter, economists began looking for an up-tick in services output and a strong retail sector to save the economy from recession. German GDP data for the final quarter will not be released until February 14.

For the quarter overall, German retail sales were up just 0.1% following a steep -0.6% fall in the prior period, which impairs the odds of consumer spending making a meaningful enough contribution to growth at the end of the year.

"These data are not normally good predictors for consumers’ spending, but they add to evidence that growth in Germany rebounded only marginally in Q4," says Vistesen. "We think GDP managed only a 0.1% rise." 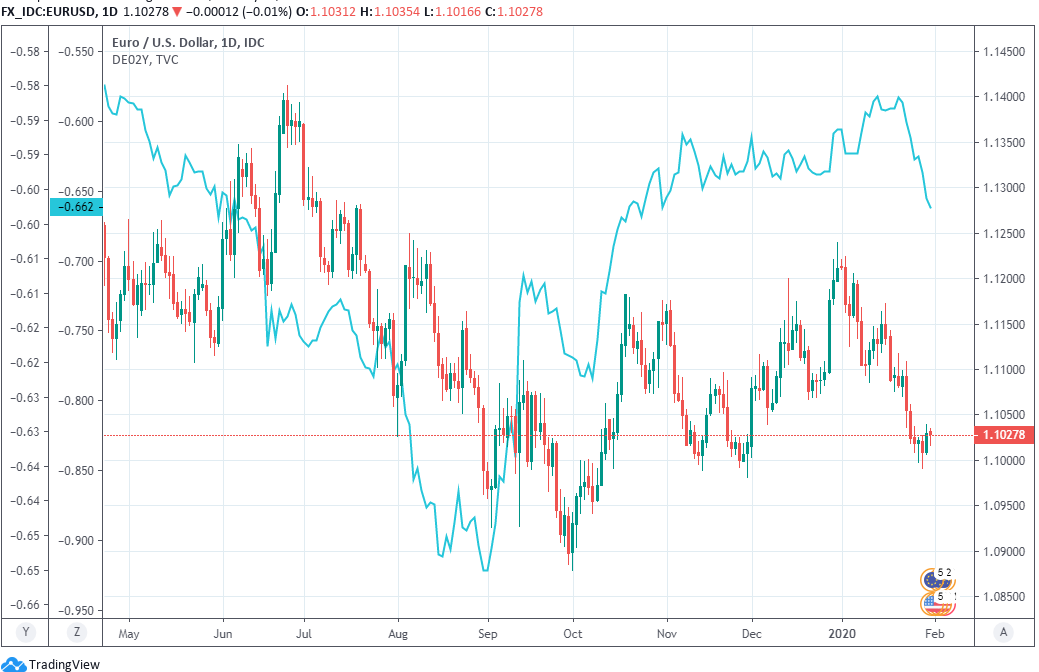 The Euro was quoted 0.01% higher at 1.1483 following the release Thursday, although this had more to do with a change in Federal Reserve interest rate policy and a weakening Dollar than it did the Eurozone data.

"We think the Fed story will dominate proceedings and EUR/USD will test resistance at 1.1570/1620, with upside risks," says Chris Turner, head of currency strategy at ING Group.

The EUR/GBP rate was -0.09% lower at 0.8743 during the morning session and has now fallen more than 2.8% thus far in 2019. The Euro was lower against all G10 currencies other than the Dollar Thursday.

"EUR/GBP fell 5% in 3 weeks this month, creating 15-month highs and lows in the prices. It'll probably settle into a 0.865--0.8850 range for a while now, with a break back over 0.90 only really on the cards either if EUR/USD breaks higher (unlikely) or a no-deal Brexit becomes more likely," says Kit Juckes, chief FX strategist at Societe Generale. 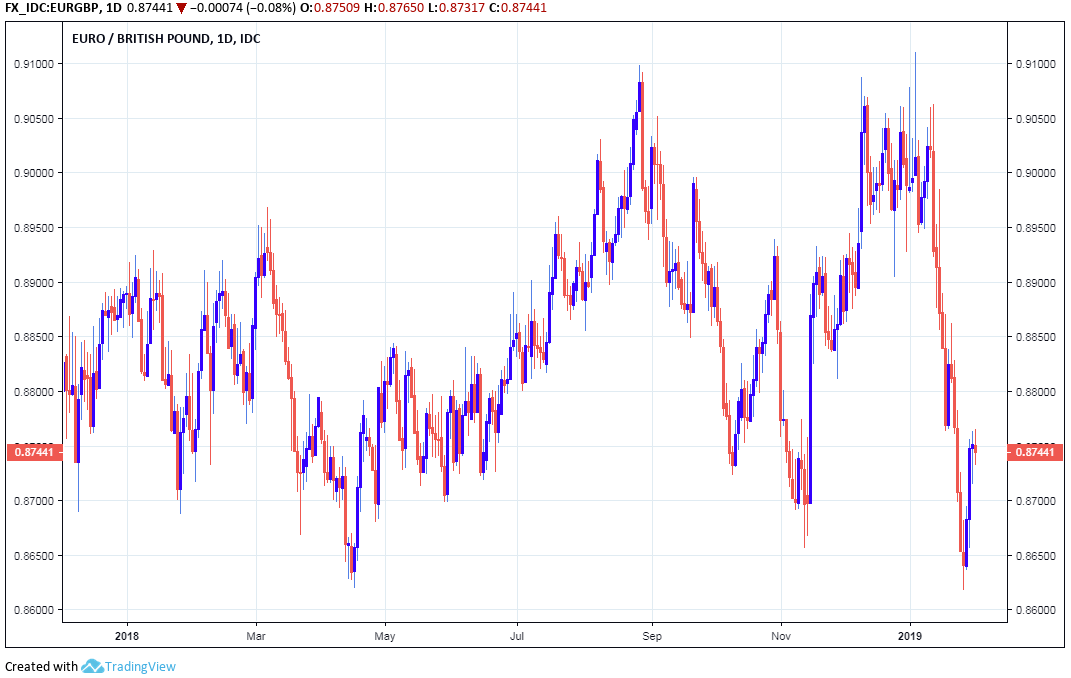 The faltering economic outlook is a problem for markets, and potentially the Euro up ahead, because of what it might mean for the European Central Bank (ECB) interest rate outlook.

ECB officials have already hinted that they could defer the date of an initial increase in the bank's interest rates, which are still at record low and crisis era levels, until well into 2020 because of the slowdown.

However, the bank could soon face having to ankowledge to the market that it may not be able to lift its interest rate at all before the next global recession hits. That would force markets to contemplate what might happen if the ECB finds itself fighting a recession when it's already nearly out of monetary bullets to fire.

"For the ECB, the weak growth rate means that the current staff projections of 1.7% growth for 2019 will be a tall order. Given the weakness in surveys about eurozone growth in January as well, it is likely that the 2019 growth forecast will see a substantial downgrade in March," says Bert Colijn, an economist at ING Group. "With this, the almost philosophical debate in the governing council of where we are and where we are going may take a more pessimistic turn."

The Euro has so far remained immune to the increasingly dark economic outlook, partly because of what the latest change in Federal Reserve interest rate policy means for the global currency landscape but also because markets have already priced everything they know to be certain into the exchange rate.

As a result, for the single currency, a lot will depend on what the ECB says at its March monetary policy meeting as well as what happens further afield, outside of Europe, over the coming months.

Failure by U.S. and Chinese negotiators to end the trade war and, or, a continued slowing of China's economy would both bode ill for the Euro outlook. So too would a messy Brexit.

But an end to the trade war, stabilisation of China's economy and a smooth Brexit are all possible. And each would serve as an effective ointment for at least some of Europe's economic ailments and potentially help the ECB in its mission to "normalise" the bloc's monetary policy.

Failure by the ECB to escape from its post-crisis policy prison would be bad for the Euro, particularly as most other G10 central bank interest rates are already much higher than the ECB's -0.30% deposite rate and its 0% refinancing rate. It might even encourage fresh questions about the viability of the single currency.

The ECB needs economic growth to be sufficient enough for it to lift the consumer price index and core inflation back toward the target of "close to but below 2%", if it is to be able to justify raising interest rates. That's what the currency market wants to see.

But core inflation, which is the more important measure of consumer prices, is currently at just 1%. That's unchanged from it's January 2016 levels and only 0.4% higher than it was in January 2015, when the ECB was planning to unveil a record-setting monetary stimulus package.