Analysts at a leading European investment bank have warned the Pound to Euro exchange rate (GBP/EUR) could well fall to 1.0.

Economists at Deutsche Bank have updated clients with their Brexit road-map which includes potential valuations for Pound Sterling.

The message to take from Deutsche Bank’s briefing is that difficult negotiations will at some point see markets bet on the worst possible outcome for the economy - i.e a hard-Brexit - even if that is not the final outcome.

A hard-Brexit scenario would see the UK default to World Trade Organisation (WTO) rules and could hamper the UK’s ability to trade with Europe and there are understandably negative implications for future UK economic growth under such a scenario.

For co-authors of the report Oliver Harvey and Mark Wall at Deutsche Bank’s London office, “a hard-Brexit is avoidable.”

And, “a very broad agreement on a new relationship between the UK and EU27 combined with a transitional deal is possible before March 2019,” say the authors in a client briefing dated March 23.

“But the complexity of negotiations, political risks and most importantly time constraints will make it an uphill struggle,” says the note.

For the authors, the contradictory views of the UK and EU on what is achievable, and how talks should be sequenced, are a major problem.

“For the market, the eventual destination is of less importance than the journey to get there,” say Wall and Harvey.

The inherent difficulties of negotiations will mean the market fully prices a hard Brexit outcome - no transitional agreement and WTO rules - at some stage in the next two years.

And it is at this point that Pound Sterling will likely be at its lowest ebb as it will be “the main shock-absorber for Brexit” and will therefore reflect potential outcomes at each point of the negotiation.

In fact, the reaction of the British Pound could be important in determining the end result it is argued as “market pressure may be important in incentivising the UK to compromise, as was the case with other recent European political crises such as Greece in 2015,” say Wall and Harvey.

At this point, Deutsche Bank believe Sterling is pricing a relatively benign Brexit and could therefore absorb more negative news.

The Pound is said to be barely below fair value against the Euro on a Purchasing Power Parity basis.

This is an assessment of the value of two currencies based on the difference in cost of a comparable basket of goods in the two regions.

“Combined with limited adjustment in the UK’s current account deficit and slowing growth we see further downside, and forecast 1.06 in GBP/USD by year-end, or EUR/GBP close to parity if EUR/USD remains resilient,” say Harvey and Wall. 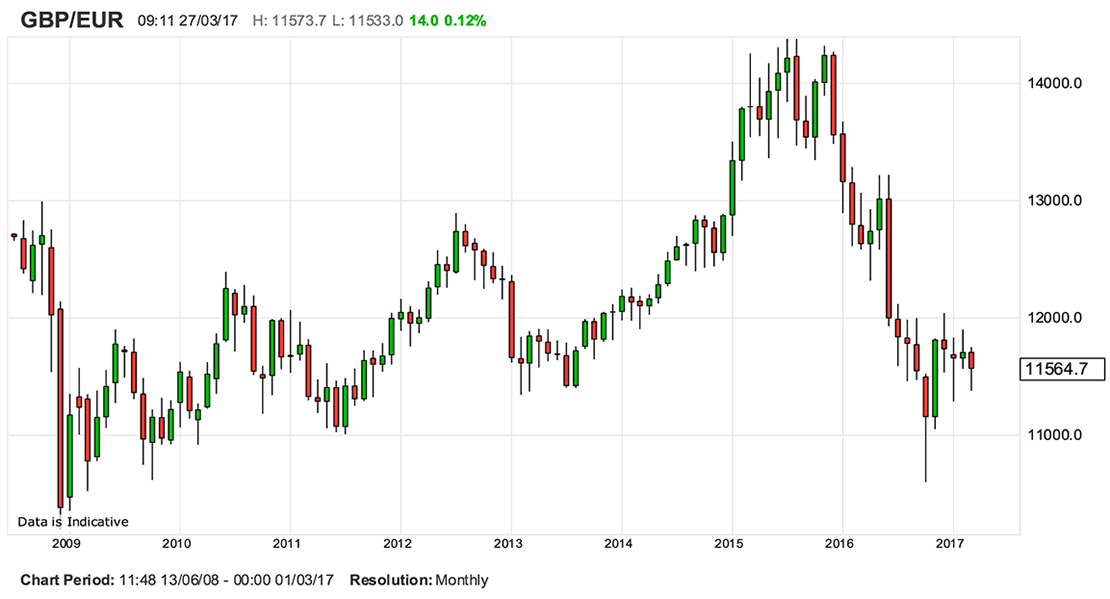 Above: Pound Sterling could fall to levels last seen following the financial crisis of 2008 against the Euro, and perhaps go even lower to 1.0.

Deutsche Bank believe the UK will have to abandon its strategy of a comprehensive new relationship being concluded by March 2019 and accept compromises on the budget, sovereignty and freedom of movement for a transitional deal.

“The political difficulties only look resolvable with an early UK general election. Our base case is that the UK will eventually compromise, but this will depend on a weakening economy and market pressure,” say the authors.

The Other Side of the Coin

However, it must be remembered that this is just one view concerning the outlook and there are more constructive perspectives to be found.

Analysts at Barclays see the Pound steadily rising from here.

“We expect the triggering of Article 50 to initiate a ‘sell the rumour, buy the fact’ rebound in GBP from historic undervaluation as ambiguity over Brexit recedes,” says Marvin Barth, a foreign exchange analyst with Barclays bank in London.

The view is echoed by strategists at Morgan Stanley who believe now is the time to hold onto your Sterling.

Morgan Stanley’s Hans Redeker argues Sterling is at a level commensurate with a hard-Brexit and would, therefore, rebound if a more benign trade deal were struck between the UK and the EU.

“The GBP rally has already started. The Bank of England's Deputy Governor Ben Broadbent seems to agree with our view that the current GBP level is pricing in economic challenges for the UK when it leaves the common market,” says the strategist.

"From a long-term perspective, the GBP is substantially undervalued against most other currencies. Our own long-term fair value estimate suggesting by around 20%.

"In other words, most of Sterling's depreciation since the British government announced plans in late 2015 to hold a referendum the following year on whether the UK should continue to remain a member of the EU, should disappear in the very long-term."