The British Pound has advanced against the Euro for four days in succession - confirmation that a nascent recovery base may now be forming, or could it be the pause before the next big push lower? 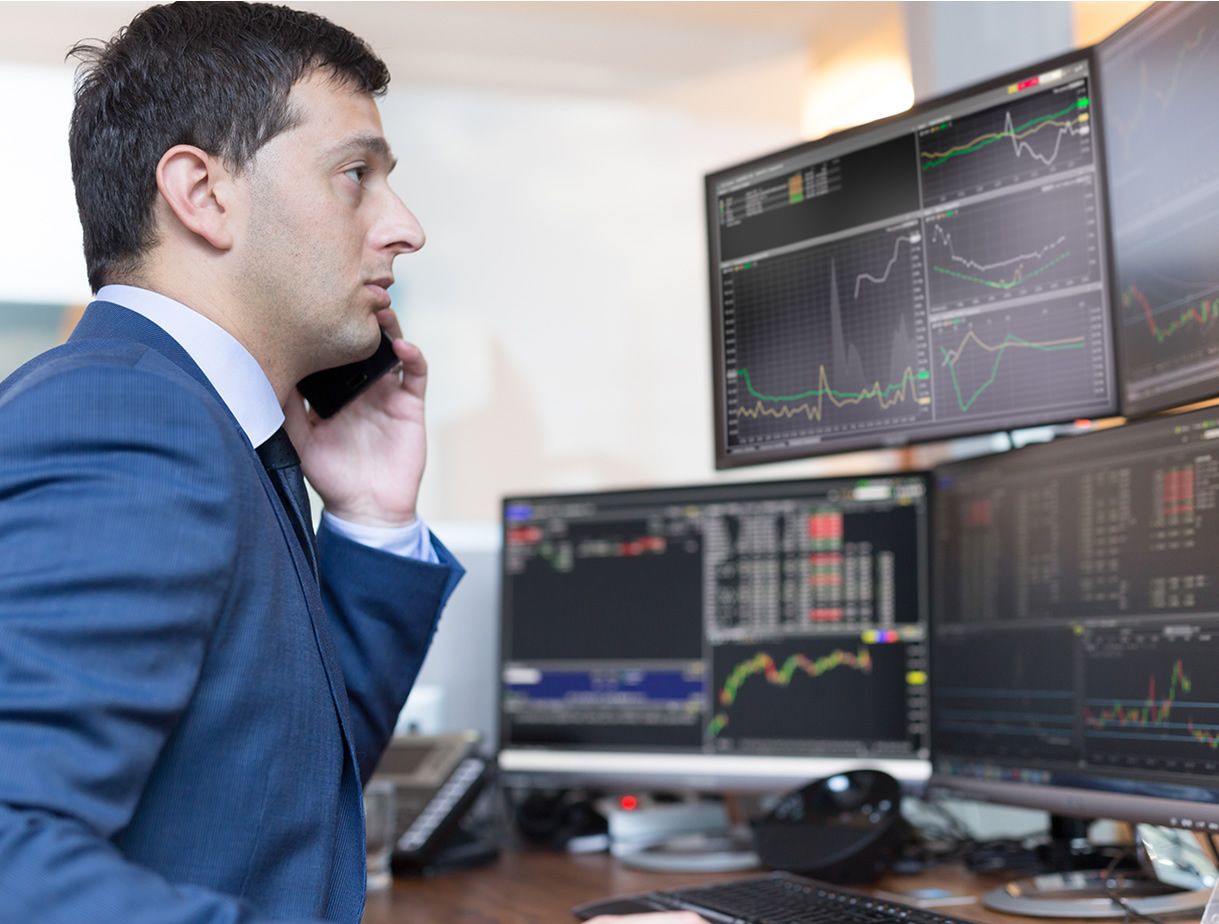 Whether Sterling is on the cusp of a sustained recovery or gearing up for the next leg lower can be fathomed out by identifying what the signals to such moves are - when they are met those watching the market can be better prepared for the likely outcome.

The GBP/EUR pair has recovered marginally after its most recent big sell-off, when it reached lows of 1.1586 on July 6 and is currently trading at 1.1792.

Our studies show the pair is close to solid support at 1.1555.

We have determined that this is a notable support level based on previous price.

The extrapolation is seen below in the form of the S1 monthly pivot; a technical level where exchange rates pause in normal conditions, since traders often use them a focal point for trading counter to the dominant trend. 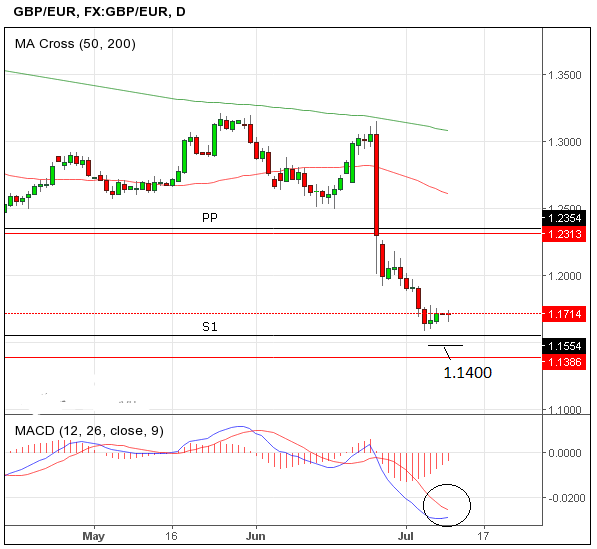 A clear break below S1 would be required to confirm more downside.

Therefore, those watching GBP / EUR should be aware that a move below 1.1490 would likely initiate more downside to the next target at 1.1350.

Price action remains overall bearish as confirmed by the MACD indicator in the bottom pane.

The MACD measures momentum and appears to be completing a rounded bottom with a view to rising, and this moderates the bearish bias in the overall chart.

Nevertheless, on balance the exchange rate remains in a strong down-trend, which in the absence of any reversal signals is expected to continue.

Institutional Forecasts Show Consensus See Sterling at 1.21 by Start of 2017

The latest polling of the world’s largest institutional analysts by Bloomberg show that Sterling is potentially undervalued at present levels.

It would appear that Sterling will track this level through the course of 2017.

Note that the most generous analyst sees a recovery to 1.49 by the end of 2017 while the more pessimistic, HSBC Holdings, see the rate declining to 1.09. 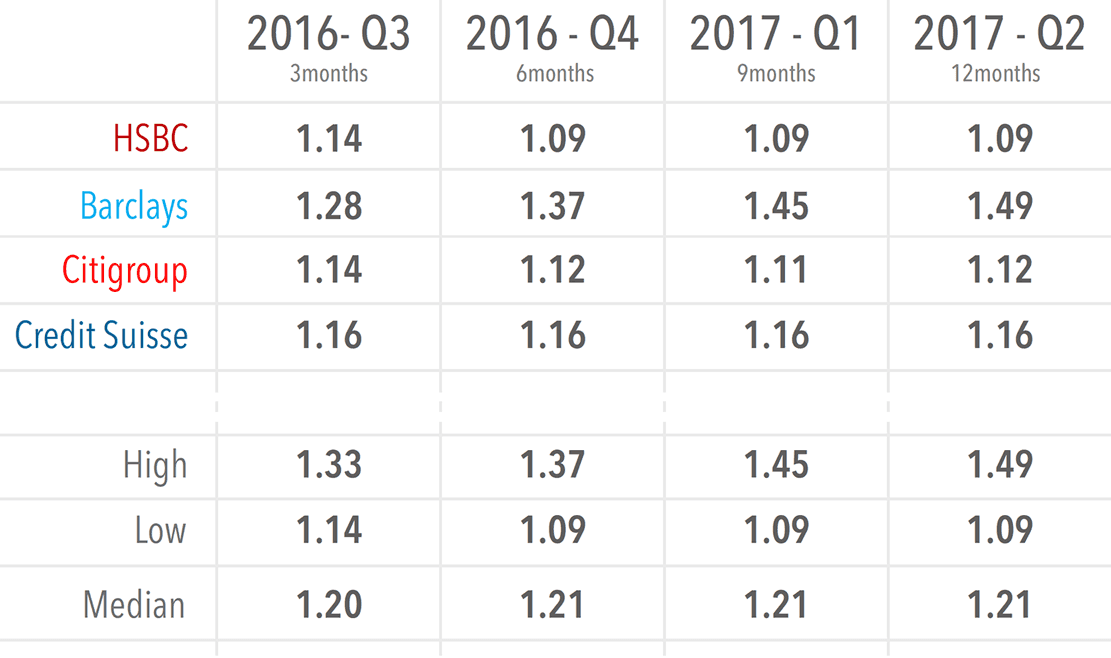 The unexpected settling of the Conservative leadership debate on Monday that sees Theresa May being installed as Prime Minister on Wednesday was welcomed by markets.

Markets need certainty and clarity more than anything, and with the next PM installed, one referendum-induced concern has been erased.

There is much work to be done, but markets did bid the GBP higher on this one political advancement.

Analysts see May as being a Brexit-lite candidate; a pragmatist who has the experience necessary to seek both an exit while seeking access to an open European market.

"The good news is that Mrs. May is an experienced politician who is a known quantity in Brussels. She may also get a more sympathetic hearing from other EU leaders given that she campaigned on the side of Remain and may thus be in a better position to cut a deal," says analyst Peter Dixon at Commerzbank.

Clearly though, May has her work cut out.

The difficult task of balancing the UK’s national interest with those of other EU members will take time to evolve, and in this environment we would not expect a sustained recovery in Sterling.

The main event for sterling in the week ahead is the Bank of England (BOE) rate meeting on Thursday July 14.

There is a great deal of speculation as to whether the BOE will decide to cut interest rates to help stimulate the economy following Brexit.

ING Bank’s Viraj Patel has said that the probabilities of the BOE making a rate cut are finely balanced around the 50/50 mark, but that his own call would be for a cut.

According to market-based methods of estimating the likelihood of a rate cut using the changing price of Interest Rate Swaps, the probabilities are estimated at 64% that the BOE will cut interest rates by 25 basis points.

However, Patel also acknowledged that whilst he believed there would be a rate cut, ING’s economists did not thing there would be one due to a lack of available econometric evidence since Brexit which only occurred at the end of June.

They expected the BOE would want to first see what the scale of the slow-down looked like before making a decision on interest rates.

This too seems a cogent argument for expecting the BOE to take a ‘wait-and-see’ approach.

ING’s Patel sees little chance of a strong rally in sterling as a result of a decision to put rates on hold, as only a small fraction of its decline has resulted from expectations of a rate cut.

There will be much speculation in the week ahead as to how Theresa May will enact negotiations with the EU on a Brexit.

There is also now a serious challenge from legal experts who claim the referendum is advisory only and Brexit would require a vote in parliament to be ‘binding’.

Anyhow, the pound rallied after the immediate news that Theresa May will be next leader of the Conservative party, and therefore the next prime minister of the

United Kingdom, as it reduces one of myriad sources of uncertainty.

The news came about after it was announced on Monday morning that her last remaining rival, Andrea Leadsom, was standing down.

Leadsom said she was standing down due to May's overwhelming support and because it was in the national interest to foster stability in the country.

The pound may also have gained a boost as it is not expected that May will take a hard line in any divorce negotiations with the EU, as she voted 'Remain' in the campaign, albeit only offering mild support.

This may also curry favour with EU diplomats as they will not see her as party to Brexit, and help Britain get a better deal, and could therefore be seen, on balance as improving the outlook for the economy.

May is also an experienced politician and seen as a capable 'pair of hands' by many.

Eurozone news in week ahead

The main event on the Eurozone news calendar in the week ahead is the second and final estimate for Eurozone CPI, which is forecast to remain unchanged at 0.1% in June.

If the inflation rate rises that will be positive for the euro.

Analysts are mixed in relation to their fundamental views on the euro.

Some expect the currency to be supported by its large current account surplus, and euro-denominated loan repatriations in event of a global slow-down.

Pro-euro analysts, however, argue that only further rate cuts from the ECB would have the power to materially weaken the currency, and these are unlikely as they impact negatively on bank profitability, placing even more pressure on banking hotspots such as Italy.

The argument that the euro could rise, or simply hold its own at the very least, does seem on balance the more probable of the two.

In our opinion this leaves sterling vulnerable to further risks of downside.