- GBP/EUR closing in on 1.16 support, underpinned at 1.1565
- But may struggle above 1.17 if consolidation stifles summer
- As BoE enters wait-and-see mode; waits on CPI & other data
- Final GDP, IMF’s COFER report & non-farm payrolls in focus

The Pound-to-Euro exchange rate enters the new week closing in on nearby support levels which could break its fall over the coming days after being dislodged from near April highs by a show of patience from the Bank of England (BoE), which could prove stifling for Sterling over the coming weeks.

Pound Sterling was a strong starter last week but ended the period a fraction lower against most major counterparts after an earlier advance in the direction of April highs was stifled in the closing half when the BoE’s balanced June policy update provided no further fuel for the move.

“There was no urgency at the BoE to shift the stance or guidance on monetary policy this week, especially coming just 6 weeks after presenting updated forecasts,” says Lee Hardman, a currency analyst at MUFG.

The BoE recognised last week that the economy has recently done better than it anticipated and that inflation could rise further than assumed in May’s forecasts, but judged that price increases would likely be “transient” and emphasised ongoing risks to the recovery. 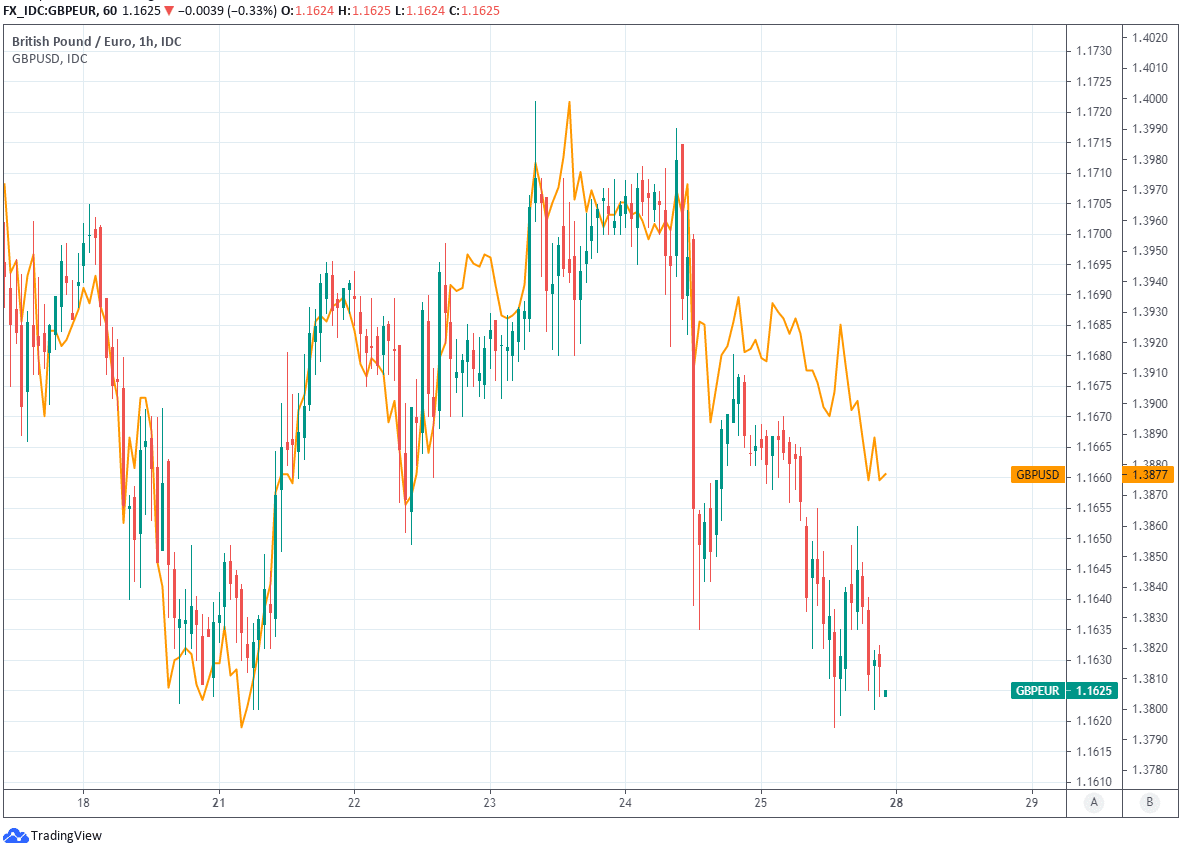 Above: Pound-to-Euro rate shown at hourly intervals alongside GBP/USD.

“Policy should both lean strongly against downside risks to the outlook and ensure that the recovery was not undermined by a premature tightening in monetary conditions,” minutes of the meeting say, in notes which could also reflect a lesser tolerance for strength in Sterling in the short-term.

The BoE not only neglected to give an endorsement for what were increasingly ‘hawkish’ market expectations but also warned that such expectations could ultimately serve to hamper the economic recovery that it’s shepherding.

“We think that the downward revision to market interest rate expectations has much further to go. While we find it hard to argue very strongly about the precise timing of the policy tightening in the UK, we are more convinced that it will come later than in the US (in 2023) and the mid-2022 date the markets have assumed,” says Ruth Gregory, a senior economist at Capital Economics.

The BoE’s patient stance is cold water poured all over the more popular case for further strength in the Pound over the short-term, although there’s no shortage of reasons for why Sterling could find support at nearby levels over the coming days, in what will be a quiet week for UK economic data.

The Pound-to-Euro exchange rate enters the new week within arm’s reach of 1.16 and what is the 50% Fibonacci retracement of its second quarter recovery, although just beneath here are other technical supports which could each help to break Sterling’s fall in the event of any further weakness.

“Immediate downside pressure should retain the upper hand while the cross stays below the .8643 June 10 high,” says Axel Rudolph, a senior technical analyst at Commerzbank, marking out an important resistance level for EUR/GBP.

Rudolph and the Commerzbank team say EUR/GBP should remain under pressure below .8643, which means the Pound-to-Euro rate is likely to retain its upward trajectory above 1.1570., which is a level that coincides almost with the 61.8% Fibonacci retracement of the same second quarter move.

The 61.8% retracement is located at 1.1565 and in the absence of a rally by the Euro, mechanically, it would take something like a downward break of 1.38 in GBP/USD in order to push GBP/EUR below here. 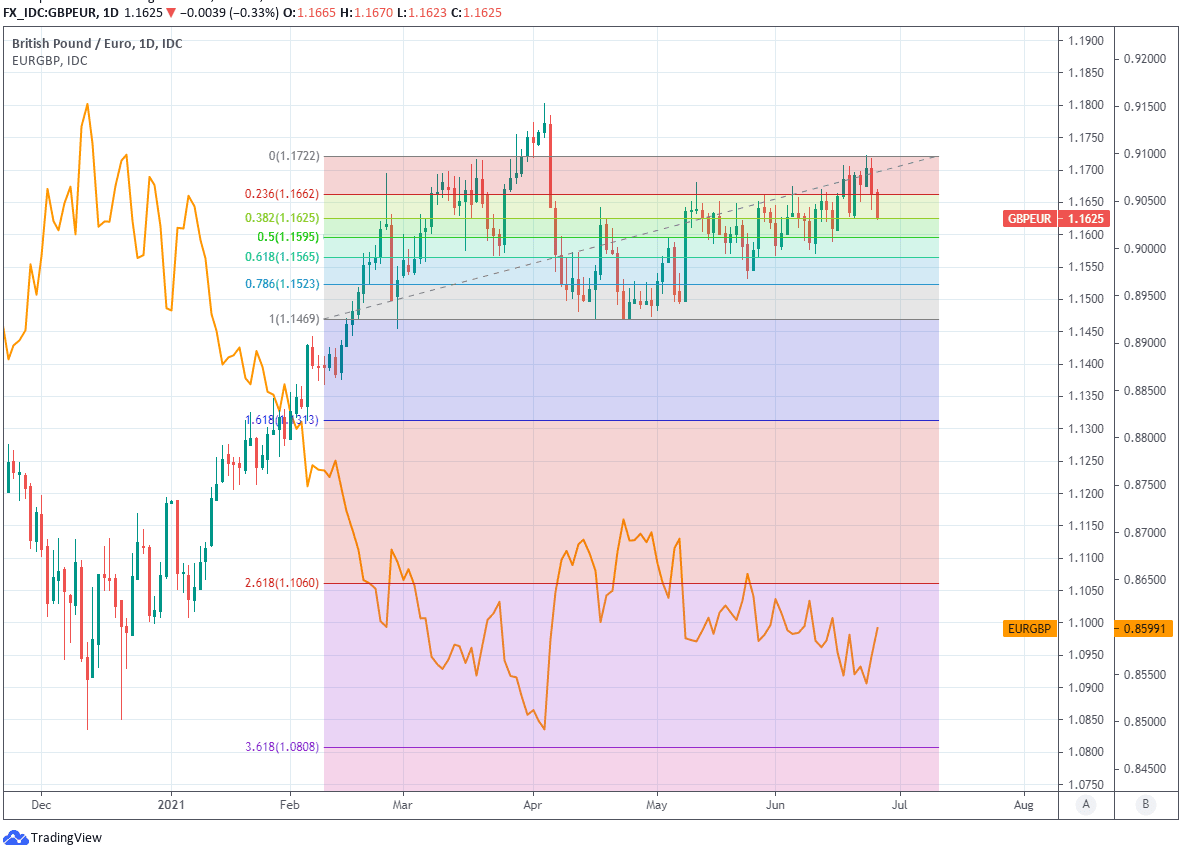 Above: GBP/EUR at daily intervals with Fibonacci retracements of April recovery And EUR/GBP.

For Sterling and the Euro the week ahead is devoid of major economic numbers with only the final estimate of first quarter GDP due out of the UK on Wednesday, where consensus is looking for the initial estimate of a -1.5% quarterly contraction to be confirmed.

With domestic calendars falling quiet much of the market’s attention could be on the June non-farm payrolls report from the U.S. on Friday, although more important for Sterling may be Thursday’s release of the latest Composition of Official Foreign Exchange Reserves (COFER) report by the International Monetary Fund.

This is released on the last day of the next quarter and this one will reveal the extent to which Sterling benefited from the recycling of central bank foreign exchange reserves during the opening months of the year, as well as whether the Dollar’s majority share of the overall pot continued the decline which began mid-way through last year.

“A fair bit of the decline over the last few quarters was due to valuation effects as the Dollar depreciated, but the decline in Q4 can be partially attributed to active selling as well,” says Michael Cahill, a strategist at Goldman Sachs in an April note covering the last IMF report.

“The Euro, Yen and Renminbi were the main beneficiaries, while the uptick in Sterling’s share appears to be mostly due to the currency’s appreciation,” Cahill wrote at the time.