The British Pound will no longer come up against month-end flow headwinds now that UK membership payments to the EU have ended, says a leading market analyst.

The UK would typically send 100s of millions of Pounds to the EU on a monthly basis when they were members of the European Union, and this would provide a dependable bid for the Euro at month-end as currency flowed across the channel.

However, this month-end support for the Euro against the Pound has been eliminated by Brexit, suggesting to Jeremy Boulton, a Reuters market analyst at Reuters, that the recent rise in Sterling's value can extend.

"When UK was part of the EU EUR/GBP was always supported at month-ends," says Boulton.

"Conversion of UK payments is history, that support is gone," he adds. 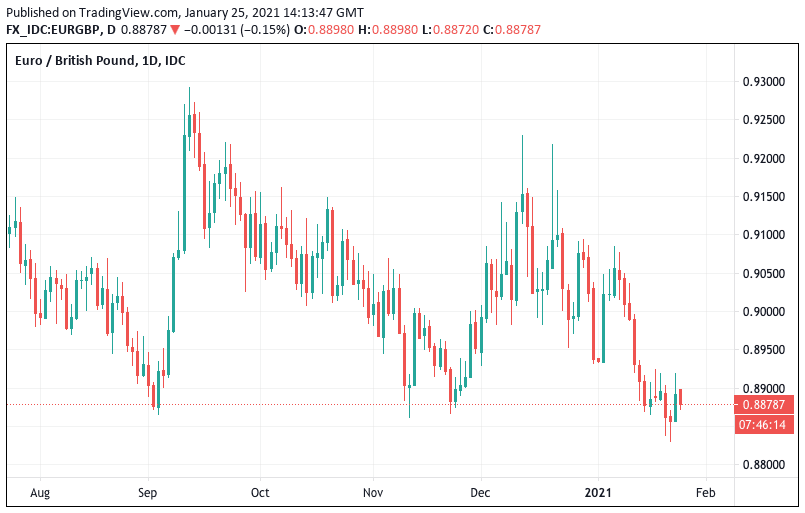 In 2018, the final year of the UK's membership of the EU, the ONS reports that the UK government's net contribution to the EU – that is, the difference between the money it paid to the EU and the money it received – was £11.0BN.

The membership payments would have provided a near-£1BN pull for the Euro-to-Pound exchange rate (EUR/GBP) on a monthly basis, assuming the payments were spread evenly and that the majority of payments were not retained for payments to be made within the UK, i.e. through agricultural subsidies.

(This equates to a fall in the Pound-to-Euro exchange rate from last week's high at 1.1325).

"EUR/GBP has since sunk to current 0.8877, bearish pressure swiftly returning," says Boulton, who adds speculative betting is set to weigh.