Sterling saw a soft start to the New Year as a renewed national 'lockdown' led to increased speculation about the outlook for interest rates at Bank of England (BoE), which has been investigating whether negative interest rates would be worth implementing. But the Pound rallied this week when Governor Andrew Bailey appeared to downplay the prospect of such a policy being implemented.

It's now risen nearly two percent against the Euro to trade back above 1.12 for the first time since November. This counts as the British unit's second largest gain in the major currency space for 2021, although GBP/EUR now has a viable path toward 1.14 and above in front of it.

"I’m not overly keen on [GBP's] fortunes short-term against the USD but quite like its chances against the EUR," says Michael Bilbe, a currency trader at Deutsche Bank.

Above: Pound-to-Euro rate shown at daily intervals alongside EUR/USD (blue).

This is after various factors saw the Euro-to-Dollar exchange rate, which is a significant influence on GBP/EUR, retreat from multi-year highs around 1.2350 over the course of the last week. Now analysts and traders at some of the world's major banks are increasingly conscious of the risk that it could fall to 1.20 or below in the weeks ahead.

A Euro-Dollar fall to 1.20 would lift the Pound-to-Euro pairing to 1.1416 if at the same time the main Sterling exchange rate GBP/USD continues to to test the 1.37 ceiling of its recent trading range. Any gains above there, or falls below 1.20 for EUR/USD, would have the effect of lifting GBP/EUR even further.

"EUR/USD remains downside corrective near term with attention on 1.2130, the 21st December low. Failure here should trigger losses to 1.2014 the September high and even the 1.1922 uptrend, which we look to hold," says Karen Jones, head of technical analysis for currencies, commodities and bonds at Commerzbank. "GBP/USD failed to overcome the 1.3712 recent peak and remains in consolidation mode. We are not convinced that we will see resumption of the up move just yet."

GBP/USD continued higher this week even as other major currencies have either stalled or retreated from the Dollar but it's not made enough progress for a correction lower to be ruled out. Jones and the Commerzbank team say such an outcome could see Sterling fall back to 1.3350 against the greenback. 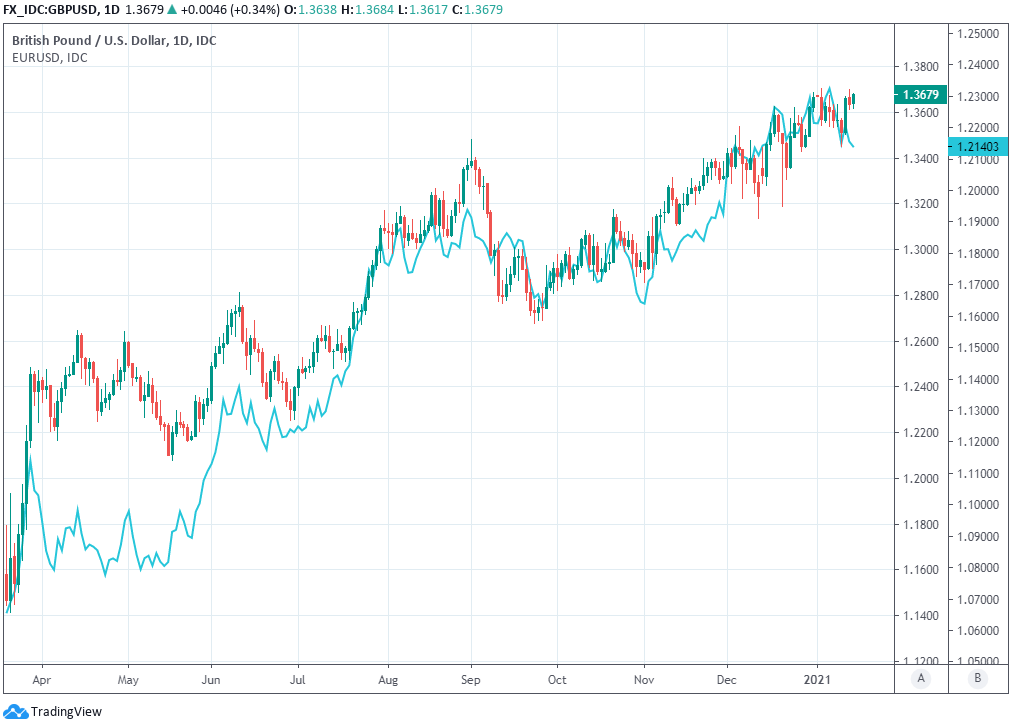 Above: Pound-to-Dollar rate shown at daily intervals alongside EUR/USD (blue).

A Pound-to-Dollar rate fall to 1.3350, if coming alongside the anticipated EUR/USD declines, would send the Pound-to-Euro rate back to 1.11 because GBP/USD is the other primary influence on GBP/EUR.

This leaves much to be determined over the coming days and weeks by investor appetite for a U.S. Dollar that has stabilised against many currencies in the last week, alongside a surge in American bond yields and uncertainty about the outlook for the quantitative easing policy of the Federal Reserve (Fed) .

"We’re still of the view that the long-term effect of the Fed’s switch to average inflation targeting is ultimately bearish the USD. A risk to that view is if Biden’s stimulus plans lead to a rise in real yields in the US (which should drive nominals higher in this climate). But even then we still expect these moves to matter only on a tactical (or short-term) basis," says Bipan Rai, North American head of FX strategy at CIBC Capital Markets. "Short USD positions and views are still widely held so we’ll concede that a period of consolidation and near-term strength is likely. For now, we prefer to lean against USD spikes from a strategic perspective. That means establishing EUR/USD longs closer to 1.20 and USD/CAD shorts closer to 1.2950-1.3000." 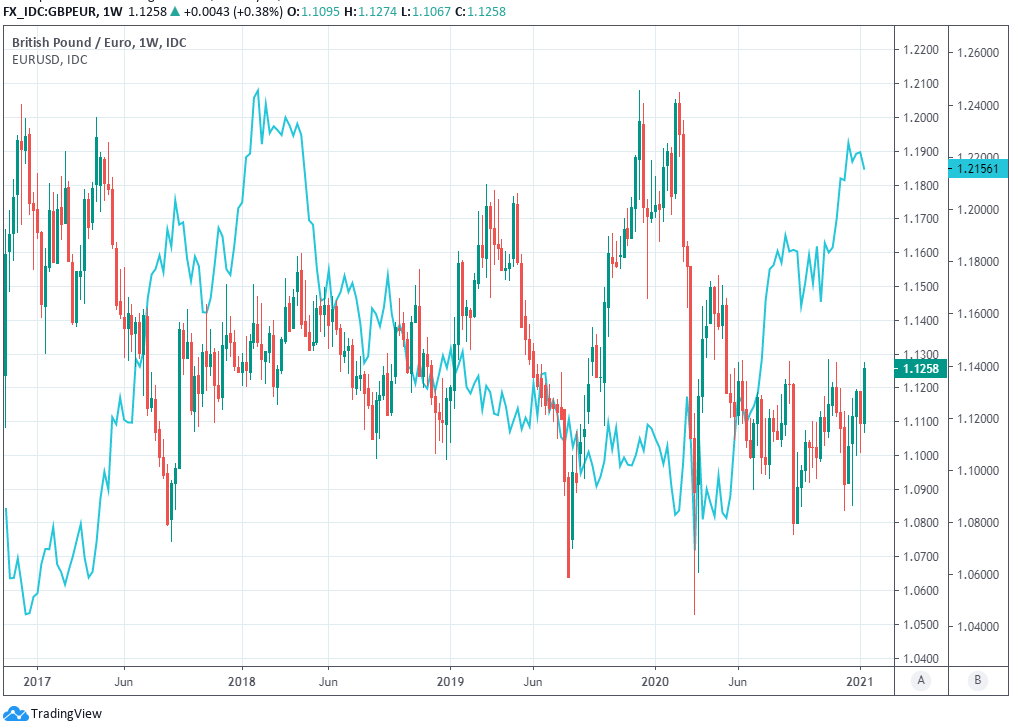 Above: Pound-to-Euro rate shown at weekly intervals alongside EUR/USD (blue).